COLUMBIA — State officials are taking a closer look at Richland County School District One’s finances amid an ongoing criminal investigation into alleged fraud by one of the school system’s former top purchasing officials, The Post and Courier has learned.

The S.C. Department of Education notified the Columbia-area school system March 28 that it could soon be placed on "fiscal watch," according to a letter obtained by the newspaper. That designation requires districts to work with state officials to ensure they have proper financial controls and oversight.

State officials met with Richland One leaders a day later, and then again April 6. They asked questions about the investigation, reviewed documentation of the alleged fraud, and inquired about how the employee in question was hired, Education Department spokesman Ryan Brown said.

But the agency still wants Richland One to explain why it failed to report the alleged fraud to law enforcement until six months after its discovery, and what steps district leaders have taken to ensure that delay doesn’t happen again.

District leaders haven’t publicly discussed the "fiscal watch" letter or what it means.

But at the end of Richland One’s April 7 board meeting, chairwoman Cheryl Harris briefly mentioned that she and others had recently met with the Education Department.

She said the state was “very pleased” with Richland One’s financial controls and said the district was in good standing.

A Richland One spokeswoman did not respond to questions April 8.

The Education Department began its inquiry into South Carolina’s ninth-largest school district a week after The Post and Courier published a story digging into spending issues at Richland One.

The article revealed Richland One had allowed a procurement manager to resign in May 2021 amid allegations he misspent nearly $41,400 in district funds. The unauthorized expenses included improper hotel stays and a monthslong rental of a 2020 GMC Yukon SUV. The district reported the alleged fraud to Columbia police in November. 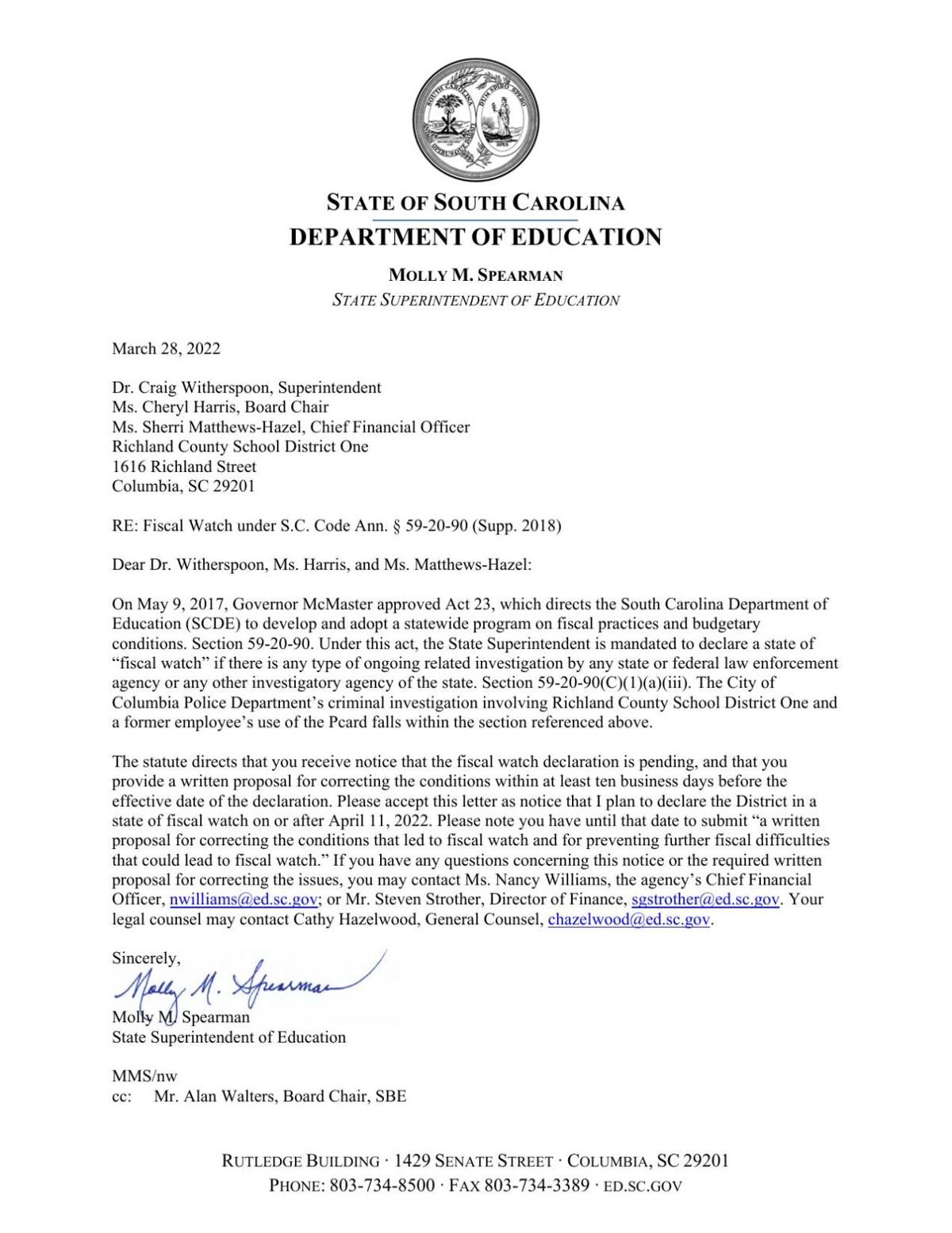 The article also pointed out concerns — raised by a parents group and Richland One’s own internal auditor — about how employees spent hundreds of thousands of dollars with their government credit cards.

The Education Department’s March 28 letter indicated state law requires the agency to declare a “fiscal watch” when a school system’s finances become the subject of a law enforcement investigation.

The letter was addressed to Harris, Superintendent Craig Witherspoon and Chief Financial Officer Sherri Mathews-Hazel. It gave the district until April 11 to submit a written plan to correct any financial issues that led to the fiscal watch.

State law charges the Education Department with stepping in to ensure school districts are managing public money properly. The agency has, at times, taken over districts that failed to correct such problems after warnings.

“Fiscal watch” is the least concerning designation a district can receive. After that comes “fiscal caution” and then “fiscal emergency.”

Nine other S.C. districts have wound up on the state’s naughty list. School systems in Union, Orangeburg, McCormick, Marlboro, Marion and Lancaster counties are under fiscal watches.

The S.C. Public Charter School District is under a fiscal caution.

Districts typically have an opportunity to appeal a “fiscal watch” designation. But Richland One might not be afforded that opportunity.

State law appears to require a “fiscal watch” as long as a district’s finances are part of an ongoing criminal investigation.