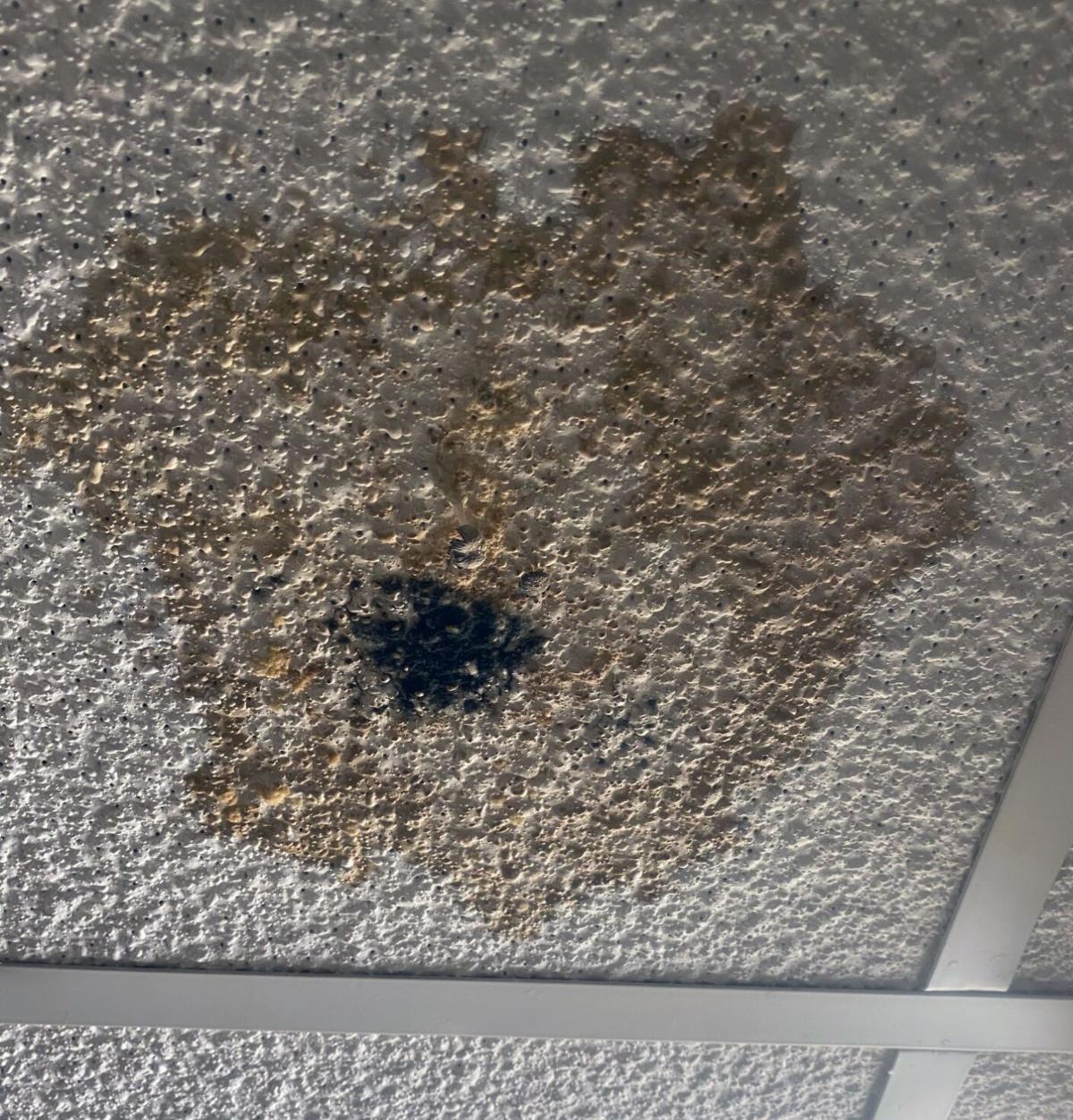 Black colored mold on the ceiling of a hallway in Capstone House in January 2021. Over 130 mold-related maintenance requests have been submitted for Capstone rooms since August 2020. Photo: Courtesy of Kendall Guthrie via The Daily Gamecock. 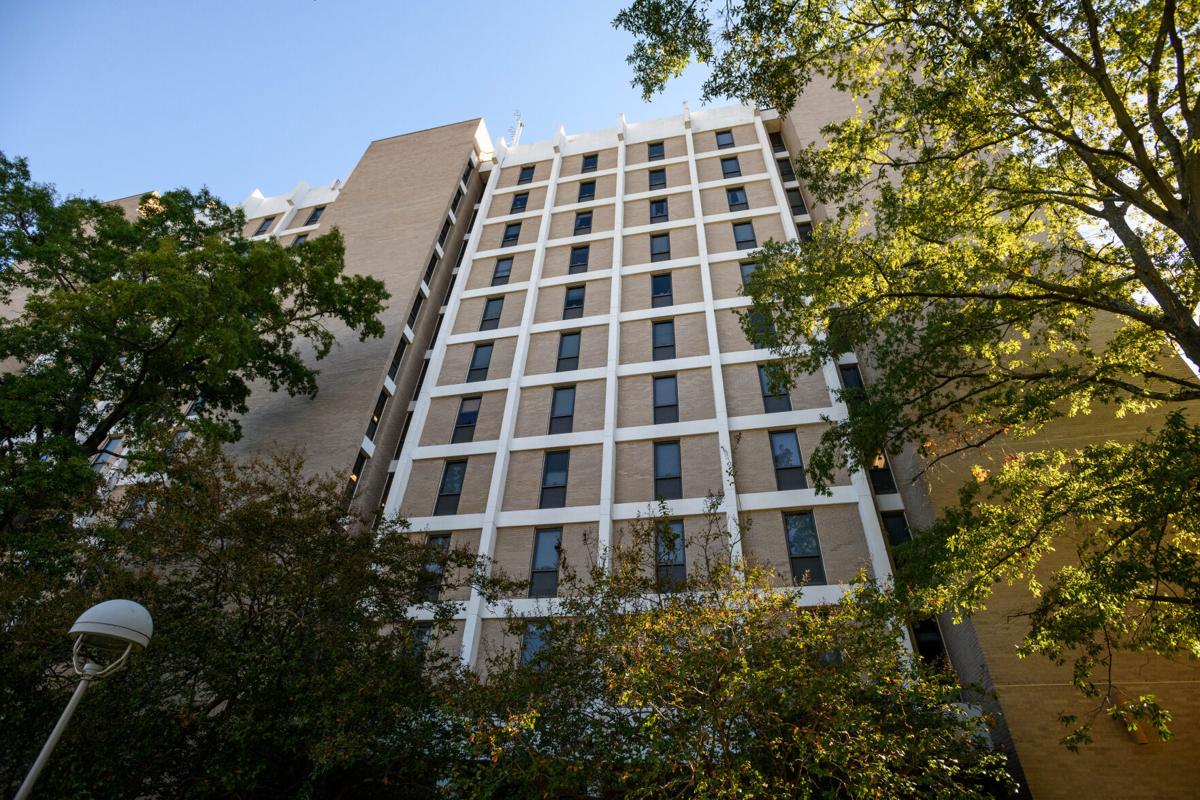 Columbia Hall on the campus of the University of South Carolina. John A. Carlos II/Special to The Post and Courier 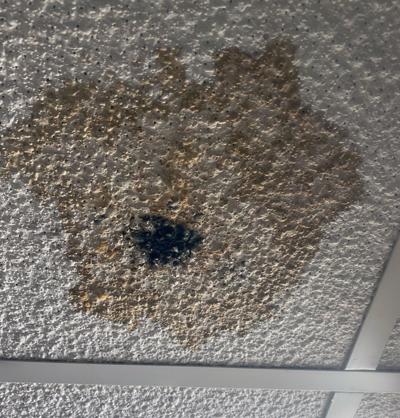 USC students complained of mold growth in on-campus dorms more than 840 times in the past two years, documenting mushrooms growing from ceilings, mold ballooning out of heating and cooling units and fuzzy specs adorning dressers on move-in day.

“The (mold) issues never really got resolved,” one student said. “Everybody had a cough, runny nose, just overall irritated and inflamed respiratory system for part – if not most – of the year.”

The Daily Gamecock collaborated with the Post and Courier in its latest Uncovered project, “MOLD U.” The investigation revealed that while USC tallied the highest number of mold complaints, it isn’t alone — at least 2,400 possible cases of mold in public college dorms popped up across the state since August 2020, often accompanied by reports of health concerns.

Uncovered is an ongoing Post and Courier project that sheds light on questionable government conduct, especially in small towns and news deserts. The Post and Courier partners with community newspapers to hold officials accountable. This was the first time it partnered with a student paper.

The Daily Gamecock staff members helped comb through more than 1,400 work orders, contacted more than 100 people and interviewed more than 20 students about their experiences with mold in their dorms.

Among our staff’s findings, the University of South Carolina has no system in place to efficiently track mold-related complaints.

And even though the system makes it difficult for the university to identify mold hotspots, our analysis of work orders revealed that older dorms have more mold complaints.

Three dorms make up the lion’s share of mold complaints students filed with USC’s maintenance team, FIXX. Columbia Hall, Capstone and South Tower — all built in the 1960s or early 1970s — had more than 100 suspected mold cases each in the past two years.

"Those with the highest numbers are the unrenovated buildings to date," Associate Vice President for Student Housing and Sustainability Kirsten Kennedy said. "So I mean, there's definitely a relationship there."

Mold stories have been long-standing in Capstone, the 55-year-old, 18-story dorm on the east side of campus.

“I just remember moving in, and the bathroom was just black,” Blaschke said.

The mold did not go away, even though she bleached the tub and shower multiple times. A mushroom formed on the ceiling outside of her room. Eventually, the university blocked off this area, so Blaschke and her roommates had to start using their suitemates' door to enter their room.

In 2021, Leah Camilli, currently a second-year criminal justice student, was frequently out sick for class during her freshman year. She believed mold in her Capstone dorm was the root of her illness but didn’t find what she estimates to be a square-foot mass of mold growing behind her bed until she moved out.

And this fall, first-year exercise student Sam Scifers opened his dresser on move-in day to find black and white mold covering what he estimates to be three-quarters of the door.

“It was a little bit of a shock because it wasn’t what I expected,” Scifers said.

Next door at Columbia Hall, Gabriel Grucella and his roommates were consistently sick throughout their first year on campus in 2020, according to Grucella, a third-year tourism management student.

They first brushed it off, but eventually decided to investigate. They opened the air vent to find a wealth of suspicious, black spots.

They reported it to their RM but didn’t file a maintenance request or clean it out of fear of accidentally spreading the mold.

South Tower residents have their own complaints. Jill Pfeifer, a first-year sport and entertainment management student at USC, said she wakes up in South Tower with a sore throat each morning.

Black substances came up when Pfeifer wiped her vents in an attempt to make her dorm room air feel cleaner. Unsure of whether it was just a collection of dust or mold, The Daily Gamecock set up a mold test to check the air quality in Pfeifer's room.

Several white-gray specks initially popped up after exposing test liquid to Pfeifer’s dorm air for an hour. The unthreatening specs grew into black blobs in the petri dish over the next several days.

Test results revealed yeast and two strains of mold that are common and can trigger people’s allergies and asthma complications. They thrive in humid, moist environments, like Pfeifer’s dorm. She bought a dehumidifier to counteract the moisture buildup and said she has to empty it daily.

It took four and a half months for USC officials to provide public records about mold to the Uncovered team — longer than any other public university, except USC’s Aiken campus.

College of Charleston and Clemson University provided data about a month after The Post and Courier requested it.

Because the system is so old, the school initially told The Post and Courier it would have to pay more than $12,000 for USC employees to manually sort through and produce the records. It eventually dropped the price to $1,800.

USC is in the process of getting a new maintenance system, which will likely be in place sometime in 2023, according to university spokesperson Jeff Stensland.

"So yeah, you're right, we should be able to push a button, but right now we can't," Kennedy said.

Though the university has invested approximately $217 million in maintenance and student housing renovations, the oldest buildings on campus haven’t been touched in part due to finances.

Older dorms, like Bates House and Bates West, are still standing in part because they’ve been paid off, Kennedy said. If the university demolishes or renovates dorms that are paid off, it loses that revenue stream, she said.

In 2021, USC tore down Cliff, where many students complained about mold, according to former RM Elijah Toland. The demolition was to make space for Campus Village, a 1,800-bed, $210 million housing development. The project will open on the south end of campus next fall.

That’s 1,800 new beds, but hundreds of students will continue living in unrenovated dorms.

“It just smells awful in here 24/7,” Hay said. “Everyone is kind of not happy with the cleanliness of our hall.”

He’s noticed what he believes is mold in AC vents and bathroom lights. But it can be difficult for students to tell the difference between mold spores or dust buildup.

Whatever students see, Howell wants them to know that maintenance will address any issue that’s reported to the FIXX team.

"(Mold) is very serious because ... we don't want our students living anywhere where there may be something that can be potentially hazardous for their health,” Howell said.

That was the story for fourth-year public health student Kendall Guthrie. She returned to her Capstone dorm in January 2020 after winter break and found a black substance scattered throughout her room.

She tried to clean up the mold herself with a spray she had bought from the store — not realizing that the spores could spread. A day after, Guthrie, now sick, called FIXX for help.

“I couldn’t sleep in my room because, again, you stir up all the stuff so you literally can’t breathe in it,” Guthrie said.

Mold also grew on the ceiling in the hallway after there was a leak. The ceiling tile became black with mold and sprouted a mushroom, Guthrie said.

To help avoid mold outbreaks, students can wipe down hard surfaces in their dorm room, clean their showers, keep the air on, close the windows, open the blinds and hang damp items to dry, Director of Strategic Initiatives Josh Wise said.

"Mold is in every space you're in," Wise said. "If the environment is not right in someone's room, it's going to create an environment for the mold that is present to grow.”

Once a maintenance request is created, an employee is sent to inspect the room in question. They bring moisture meters, temperature reading meters and thermal scanners that assess if there is mold or moisture in a room.

Kailey Cota is a reporting intern for the Post & Courier. She is the S.C. Collegiate Journalist of the Year and the Editor-in-Chief of The Daily Gamecock. Feel free to email her with Charleston restaurant recommendations or tips.

From Winthrop University to Coastal Carolina, mold reports plague universities across South Carolina. Here's a rundown of issues at some of the state's colleges. Read moreMold notebook: Which SC colleges had the most mold reports