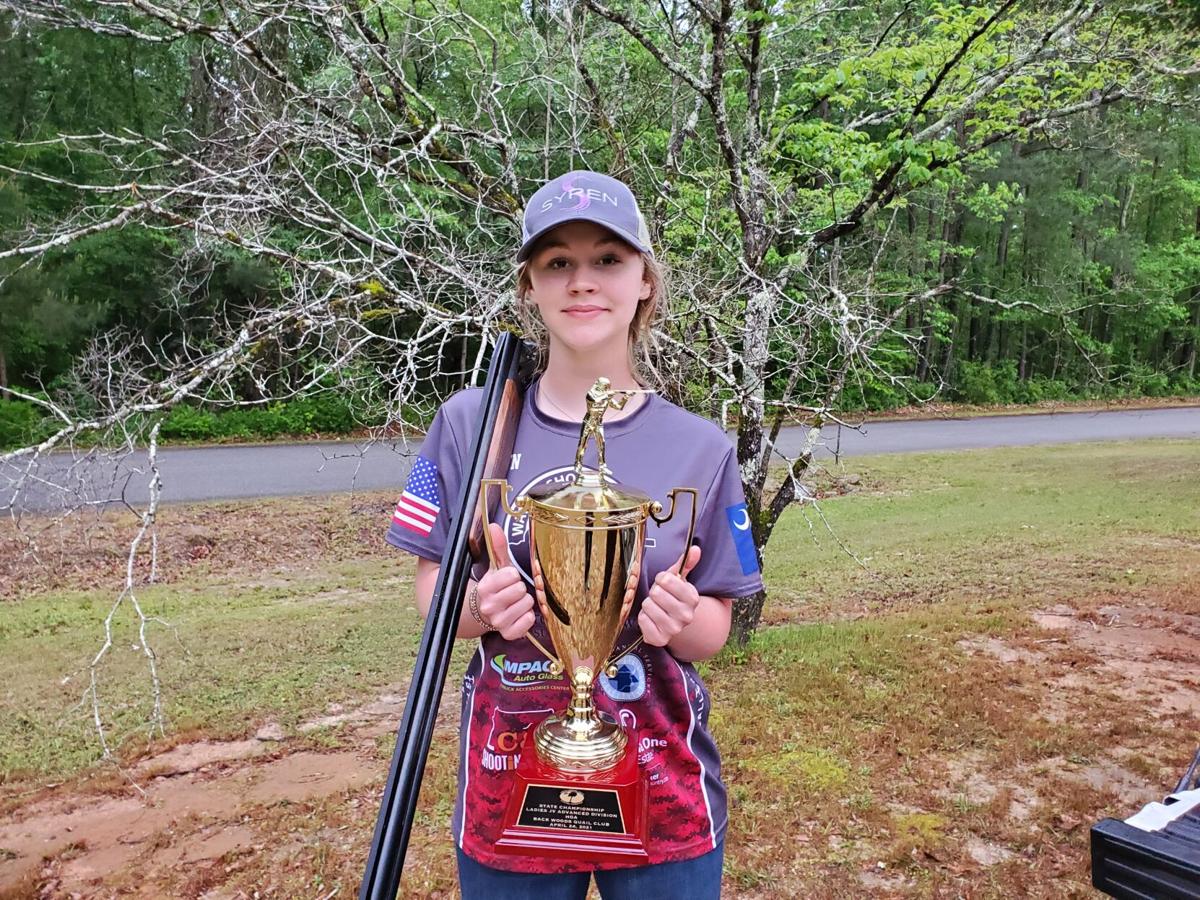 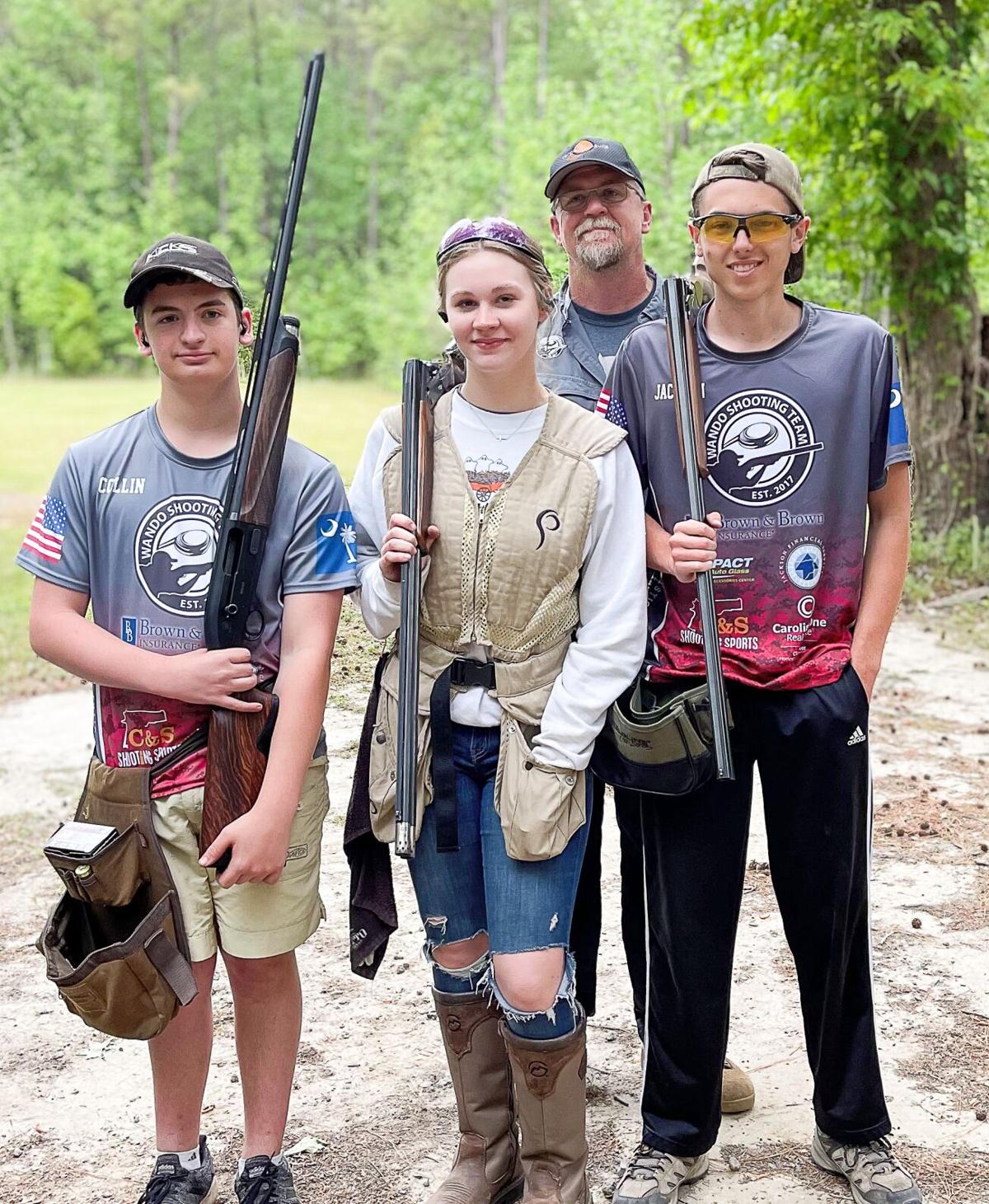 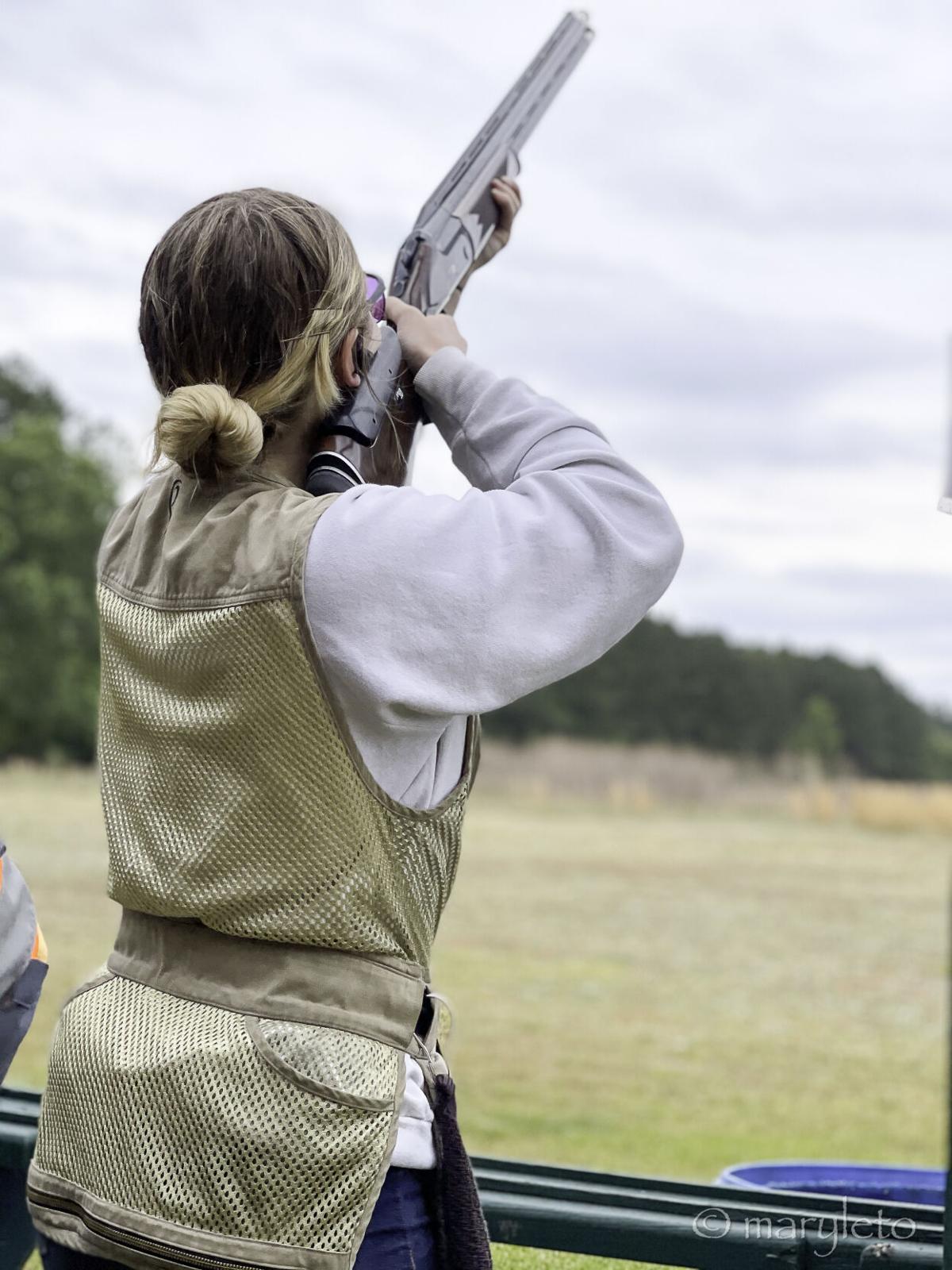 Evelyn Elkins of Mount Pleasant is one of the state's top youth shooters. Provided photo 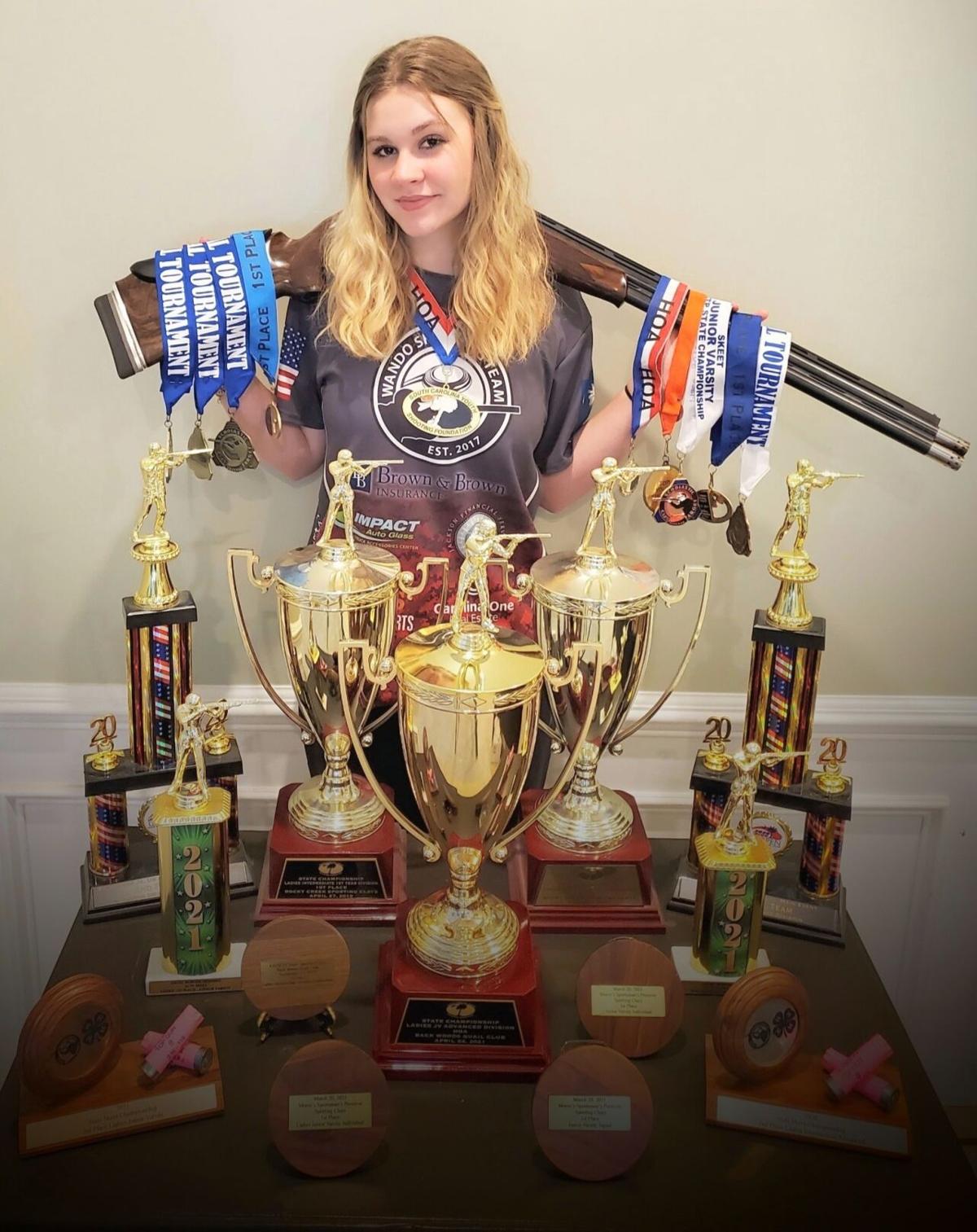 Evelyn Elkins of Mount Pleasant with some of the awards she has won over the past three years. Provided photo

At age 15, Evelyn Elkins is thinking about college and beyond. The sharp-shooter from Mount Pleasant is one of the state's top young guns in skeet, trap and sporting clays and she has the hardware to prove it.

Last month at the 2021 Scholastic Clay Target Program Southeastern Regional Championships in Savannah, Evelyn took home first place in skeet, first in sporting clays, first in super sporting clays and third in trap in the JV Ladies Division. More than 2,100 competitors from six states (sixth grade through collegiate) competed in the event and Evelyn placed in the top 5 to 10 percent for each discipline among all competing athletes.

Evelyn, the daughter of Eric and Brandi Elkins, is a member of the Wando Shooting Team, named for the community in which it was founded and not the high school. Her father is the coach.

"I want to go to college for this. I've even talked about shooting in the Olympics. It's something I want to do for the rest of my life," said Evelyn, who has her sights set on Montreat (N.C.) College, which has a clay target shooting team. She plans to major in psychology.

"I've wanted to major in that for a long time, and I feel like if I majored in psychology it can help me get better in shooting with the mental aspect of it," she said.

Evelyn was introduced to shooting by her father when she was a little girl. Eric would take her duck hunting and she said she can remember shooting her first bird when she was 3 or 4 years old. Three years ago she expressed an interest in shooting sporting clays and Eric asked around and found out about the Wando Shooting Team. The family went to spectate at the state championships and they all fell in love with the sport.

"Her interest in this was amazing. It's something we've done as a family ever since. This is her third year shooting and my second year as head coach," Eric said, adding that Evelyn had no interest in typical youth sports like volleyball, softball or soccer.

"I would say I shoot three or four days week. I enjoy all the disciplines, but if there's one I like the most it would be skeet. I like how it's so repetitive and so challenging at the same time," Evelyn said.

"When I first started shooting I thought it was fun. Now it's what I want to do for the rest of my life. I feel very grateful and proud of myself, my teammates and my coach. I've made some of my best friends through shooting."

Eric said the Wando Shooting Team, whose home base is Partridge Creek Gun Club in Ridgeville, includes shooters from throughout the area. The team has 41 competitors who shoot sporting clays and 13 who compete in skeet and trap. Team members range from age 12 to college.

Eric said there are 17 additional coaches, including Evelyn. They are required to have one coach for every three shooters and all coaches have to be certified instructors.

"Evelyn started getting her certifications last year and she will continue expanding her certifications as we go along," Eric said. "She loves the sport and having her as an assistant is great for me with her experience, especially with younger shooters. What we try and do with older experienced shooters is make them mentors to newer youth shooters. They can communicate a little better than we can because they are their peers."

Charleston hunter wise in the ways of turkeys at age 8

Eric said the Wando Shooting Team focuses on 12- and 20-gauge shooting. He said competitive shooting can get expensive.

A round of sporting clays is 100 targets (about 25 cents each) and shooters are usually using half a flat of shells. A flat (10 boxes or 250 shells) generally sells for $75. Then there are entry fees for the six tournaments at $80 each plus jerseys. He said they do have some endowments and he has been working on grants to help offset the expense.

"Honestly, with Evelyn I could open up the bed of my truck and it was filled from top to bottom with loose shells, and told her to shoot to her heart's contest. I would come back to an empty truck," Eric said.

"She will shoot for five or six hours practicing and will go through 650 to 700 rounds."

Eric said shooting is 90 percent mental and can be extremely taxing for younger kids. Shooters are standing up and shooting for a couple of hours, and the young shooters have to learn to turn on and turn off, hone their skills, identify issues and learn to self-correct.

"Fortunately for everyone, Evelyn is my test subject," Eric said. "It's worked out really, really well. She's come a long, long way in a short time. She's very proficient in her skill set and what she does. I've had parents come up to me asking where I'm sending Evelyn (for training). I tell them I'm her coach, that she comes to me and this is the way we do things. She is my test subject and allows me to test her.

"The biggest thing we try to build as coaches is consistency, like any other sport, and being able to repeat the same thing over and over again. I've told Evelyn I'm going to teach you how to do this and you have to teach me how you got so good. Teach me how I taught you do do so well.

"I love what it brings to our family and the people it brings into our lives. It's been an exceptional sport to be involved with."