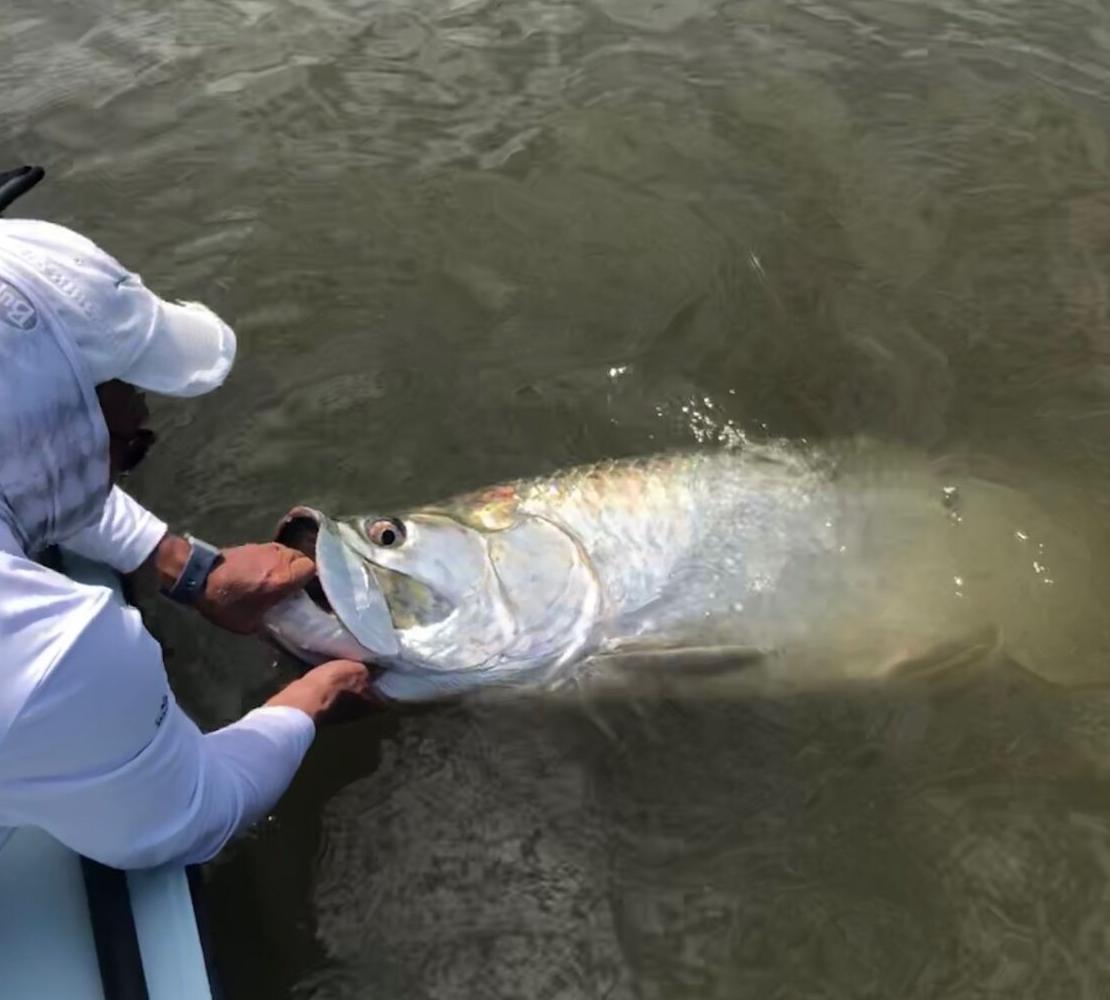 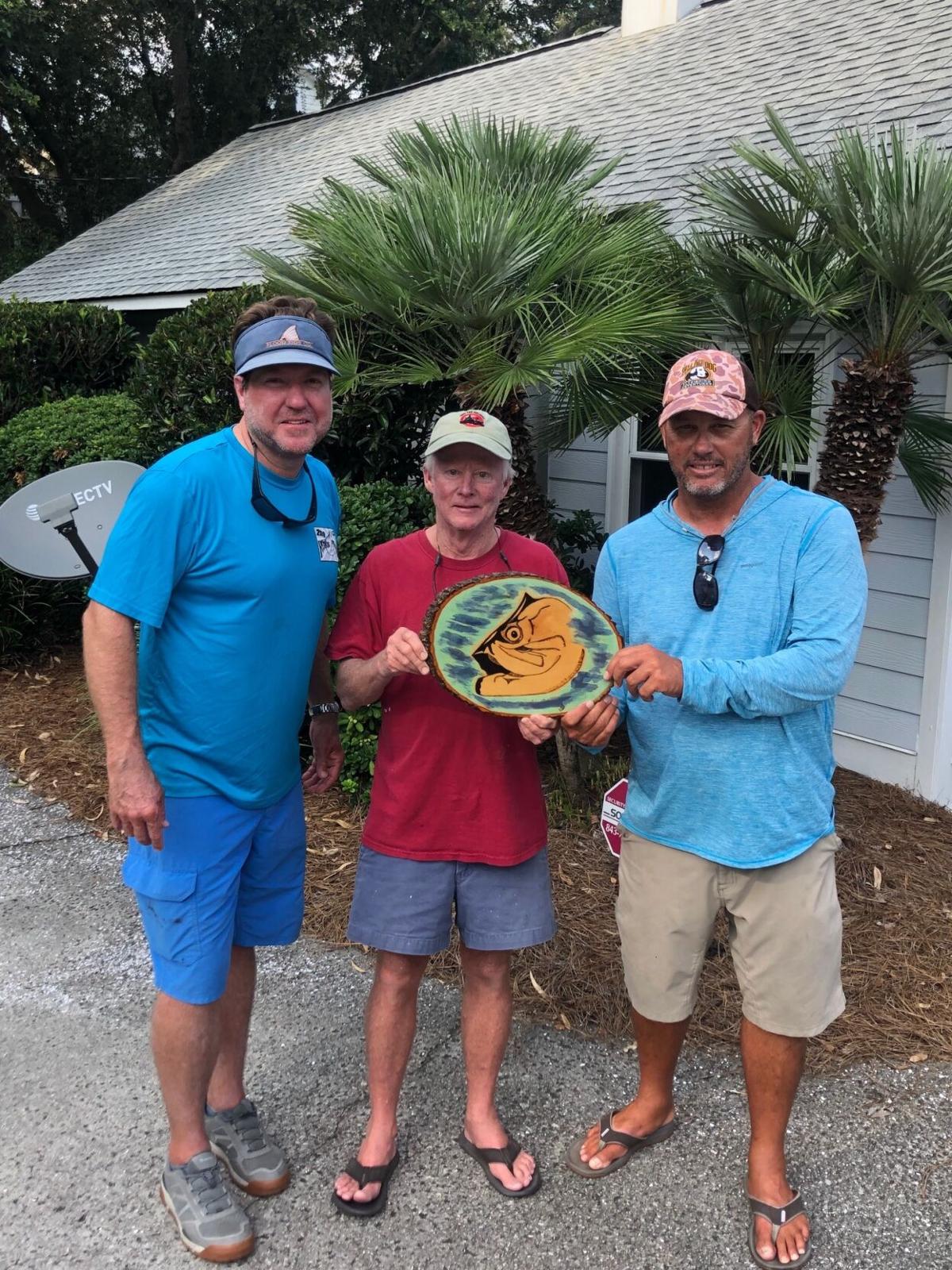 "It seems from guides I know in the Keys that they are starting to notice tarpon leaving earlier and earlier every year," said guide Chris Wilson of Fin Addict Charters (charlestonflyfishingguide.com, 843-224-7462).

"This year is the earliest I've ever seen them," he said. "I had quit cobia fishing and had the bug so I went out to check some places I usually find them and I saw one on May 17."

Wilson, 46, is one of the most accomplished tarpon fishermen in the Charleston area. He and his clients have won the Charleston Harbor Tarpon Release Tournament four times. Wilson catches tarpon on live and natural bait, and he's also managed to score with artificials (which he and John Kammerer did in winning the tarpon tournament in 2019) and with fly-fishing tackle.

"The height of the season is July, August and September. October can be good, but it also can be fickle," Wilson said. "You may have a good first week in October, but then we get a cold front and it's all over. There may be stragglers around in October if the mullet and other bait are still around."

Tarpon in South Carolina can exceed 100 pounds. The state record of 154 pounds, 10 ounces was caught in 1987 near Hilton Head. Tarpon are not considered an edible species, so it is by and large a catch and release fishery.

Wilson, who has been guiding for approximately 20 years, participated in a lot of the South Carolina Governor's Cup Billfishing Series events "back in the day" and also did a lot of light tackle billfishing in Mexico, the Bahamas, Belize and Venezuela. But today tarpon fishing is what gets his juices flowing.

His first tarpon "experience" came when he was a youngster and was dropped off at the Marine Center, a boat dealership where his father worked.

"This was back in the day when people killed them and took them home," Wilson said. "I was hanging out at the boat shop and somebody came rolling in with one. I had seen pictures, but I remember crawling in the bed of an old F150 pickup truck and there this thing was. 'Holy Cow! Oh my gosh!' That was my first tarpon experience."

"I've always had a big passion for them, and it progressed as I got into guiding and fly fishing," he said. "Fishing has always been a passion, especially the big stuff. Blue marlin fishing was my favorite, but I gave up my offshore fishing and tarpon kinda filled that gray area."

Wilson recommends looking for tarpon around inlets and searching for the bait. The bars on the outside of the inlets help funnel the bait and the tarpon are traveling these areas where the bait is moving.

"Wherever that bait moves, those fish are following it," Wilson said. "They are big creatures and they don't want to use a lot of energy. They kinda' follow the bait schools in and out on the beach and in the marshes on high tide."

Wilson favors the incoming high tide through the first couple of hours of the outgoing tide. He said you want a little bit of moving water, and the cleaner the better. Anglers should look for menhaden flipping on the surface and pelicans diving. Time on the water is the best way to become adept at spotting tarpon.

You can anchor and fish the underwater pathways the tarpon follow, fishing points and rip lines, or you can use a trolling motor to stem the tide while looking for fish.

"Rips are important. That's how these fish stage up and ambush off these rips when bait pods come by," Wilson said, adding that tides and moon phases are big success factors.

Live bait such as large mullet, big menhaden, pinfish or croakers fished under floats are productive. But Wilson said he prefers to fish artificials or fly-fish for the silver kings.

"Fly-fishing is getting more popular. There are lot more people than myself going out, putting the homework in and getting the deal done, capitalizing on the opportunity when it presents itself," he said.

"We won (the Charleston Harbor Tarpon Release Tournament) last year on a Zman HeroZ, a 10-inch soft plastic bait. Large paddletails are also great choices. If I'm not fly fishing, bait is kind of the third thing. Plastic or fly are the first two options, and if you can't make it happen with those then put some baits out in the inlet at a bar and you should get a shot."

Wilson fishes Shimano Saragosa reels in the 6000 to 8000 size. When fishing plastics or artificial lures he uses 7-foot G. Loomis Pro Blues in the 15- to 30-pound size or the IMX Pro Blue 7-foot rods in the 20-65 size. For bait fishing Wilson prefers Shimano's Teramar rods in the 20-40 pound size. He spools his reels with Power Pro braid ranging from 30- to 50-pound test. And he uses Cajun Thunder Bluewater corks with a 6-foot fluorocarbon leader and 6/0 to 9/0 Owner circle hooks, depending on the size of the bait.

"Lowcountry tarpon are special," Wilson said. "It's really quite an accomplishment to catch one, to have the time and patience and know the reward of catching one in your backyard instead of driving a car 12 hours down to the Keys or getting on an airplane and flying someplace to catch one."