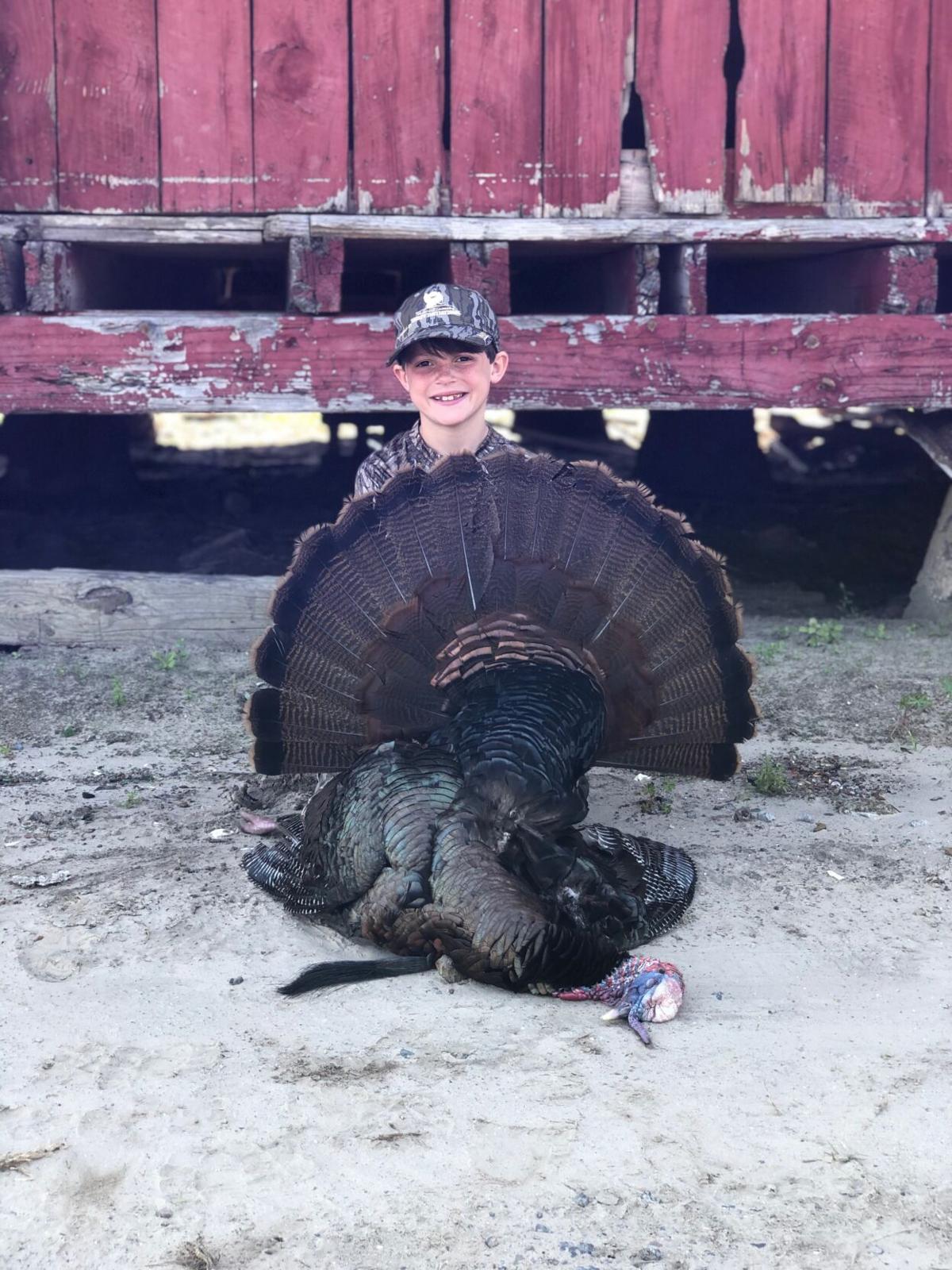 Cotsey Lalich, 8, harvested this turkey on April 6 while hunting with his father, Michael Lalich, on Wadmalaw Island. Provided photo 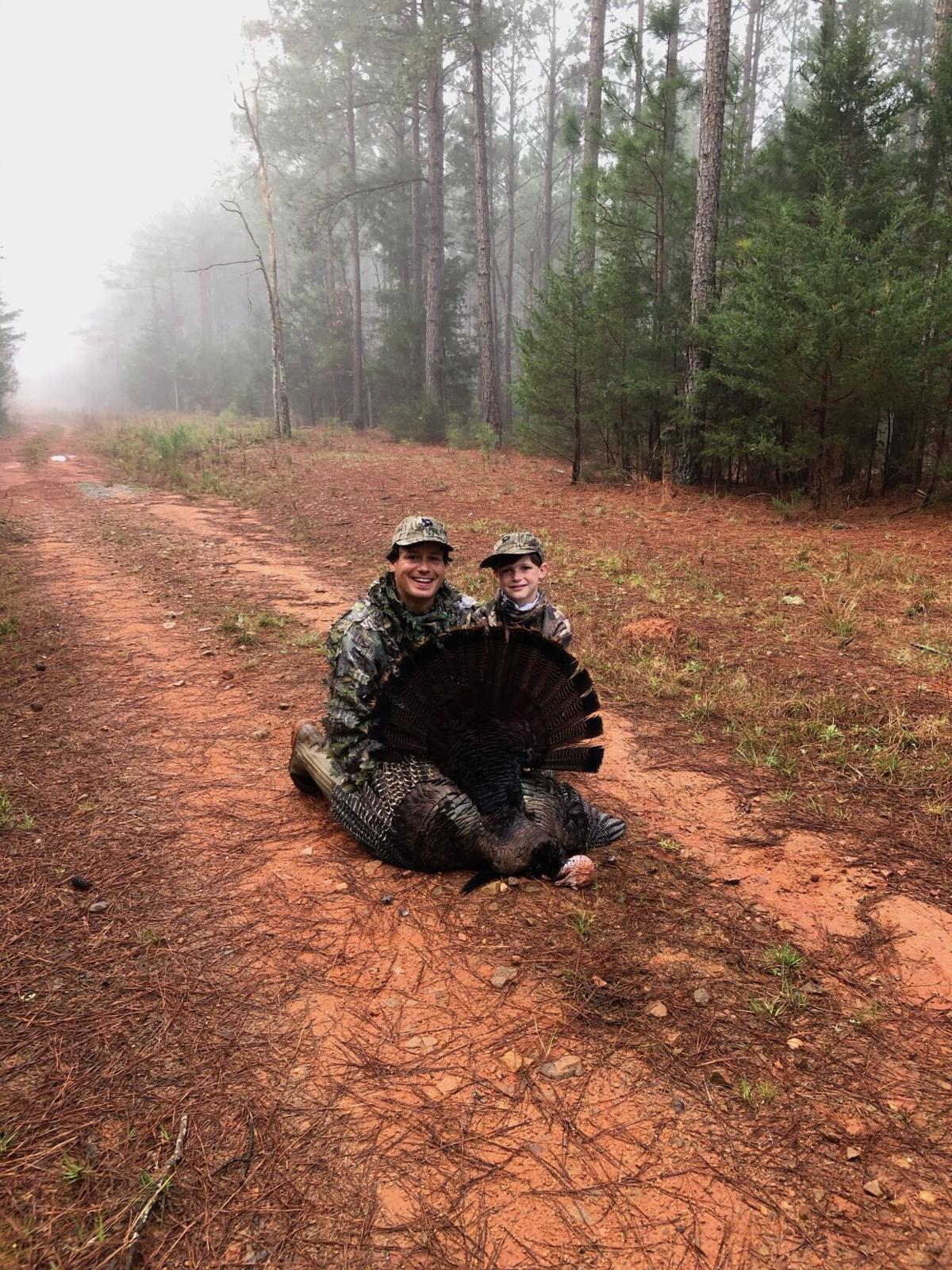 Cotsey Lalich, 8, and his father Michael with a gobbler Cotsey took in Winnsboro this year during Youth Days. Provided photo

Cotsey Lalich is a seasoned outdoorsman at the age of 8. In the past year, the second grade student at Orange Grove Charter School in Charleston has harvested his first deer, caught his first sailfish, and is well on his way to tagging out for the second straight year on wild turkeys. He also enjoys dove hunting.

Ask Cotsey which of the outdoor sports he enjoys most, and it might have something to do with the season, but he quickly says its turkey hunting. He harvested gobbler No. 2 for 2021 last week on Wadmalaw Island, a bird weighing 20½ pounds with a 10-inch beard and 1-inch white spurs with black tips.

"I like getting up early, hearing them and seeing the turkey strutting. You hear them before you see them. If you don't know the property, you look around, scout and listen and try to locate them," said Cotsey, who got three turkeys in 2020 using a .410 gauge shotgun and this year is hunting with a 20-gauge gun.

His description of his dad, Michadel, calling a bird into range is punctuated with sound effects mimicking a turkey — clucks, yelps, purrs, gobbles as well as the call of an owl. Michael uses a Persimmon Hill glass call and a Leading Lady diaphragm call.

Cotsey said the secret to turkey hunting success is switching up the natural order; instead of a hen coming to the gobbler, they try to get the gobbler to come to the hen.

He said they knew where the turkeys were roosting and tried to get to a corner of the plot while hunting on April 6. They had two jakes and a hen come in, but they moved back out to a tree line. They left their decoys and chairs and tried to reposition at the end of the tree line. As they eased along a fence line, the birds ran back in the woods and they had to move again. Cotsey suggested they hop in a ditch to make their move this time.

The big gobbler came straight to the ditch. Cotsey had his gun barrel up and took the bird with a body shot.

"Dad told me I'd better shoot this thing quick before he stabs me," Cotsey said.

"We had hunted him on Monday and called in three separate groups of hens. We had the last group at 7 to 10 steps and could hear him dragging his fan in full strut with the hens behind. We were on a tree and couldn't swing back. I had to go to work so I told Cotsey we would come back tomorrow," Michael said.

Michael said he used to tag out on turkeys but that changed when he began taking Cotsey along. He said he doesn't even carry a gun now, but enjoys the satisfaction of quality time spent with his son.

Michael began turkey hunting in his late teens, in the mid-1990s. A good friend had some property with turkeys and they began hunting them.

"We made more mistakes than we did killing but we learned valuable lessons," he said. "This guy (Cotsey) won't have to make as many mistakes as I did."

Michael said he and his wife Callie have not pushed their kids into outdoor activities. He said he wakes up Cotsey and asks if he wants to go. If Cotsey says 'Yes sir!' then they head out. If he says 'No sir!' then he will let him go back to sleep.

Cotsey will soon have to share some of those special moments with his sister Waties, a 6-year-old kindergarten student at Orange Grove. She has let her father know she wants to go this year and is looking forward to a promised turkey hunt later this month.

The 2021 Megadock Billfishing Tournament, originally scheduled July 14-17, has been canceled because of ongoing marina construction.

The tournament had been scheduled to return to the South Carolina Governor's Cup Billfishing Series this summer following a two-year absence because of marina construction.

The Megadock event was the second of five planned Governor's Cup events for 2021 to be derailed by marina construction. The Bohicket Marina Invitational Billfish Tournament, originally planned for May 5-8, was canceled after the marina was sold in March and needed repairs to the facility began immediately. Both tournaments plan to return for 2022.

The Charleston Inshore Anglers 28th annual "Big Ed" Sheepshead Tournament will be fished April 17. The captain's meeting and registration will be held from 5:30-7:30 p.m. on April 15 at American Legion Post 147, located at 968 Folly Road. The tournament weigh-in also will be held at American Legion Post 147 from 4-5 p.m. The entry fee for the tournament is $40.

America’s Boating Club Charleston will hold boating safety classes April 24 and May 15 at 1376 Orange Grove Road, Charleston. The classes begin at 9 a.m. and end around 4 p.m. Successful participants earn the S.C. Department of Natural Resources Boater Education Card. The cost is $25 for adults and youth 12-18 are free. Call 843-312-2876 or email lynes@tds.net.