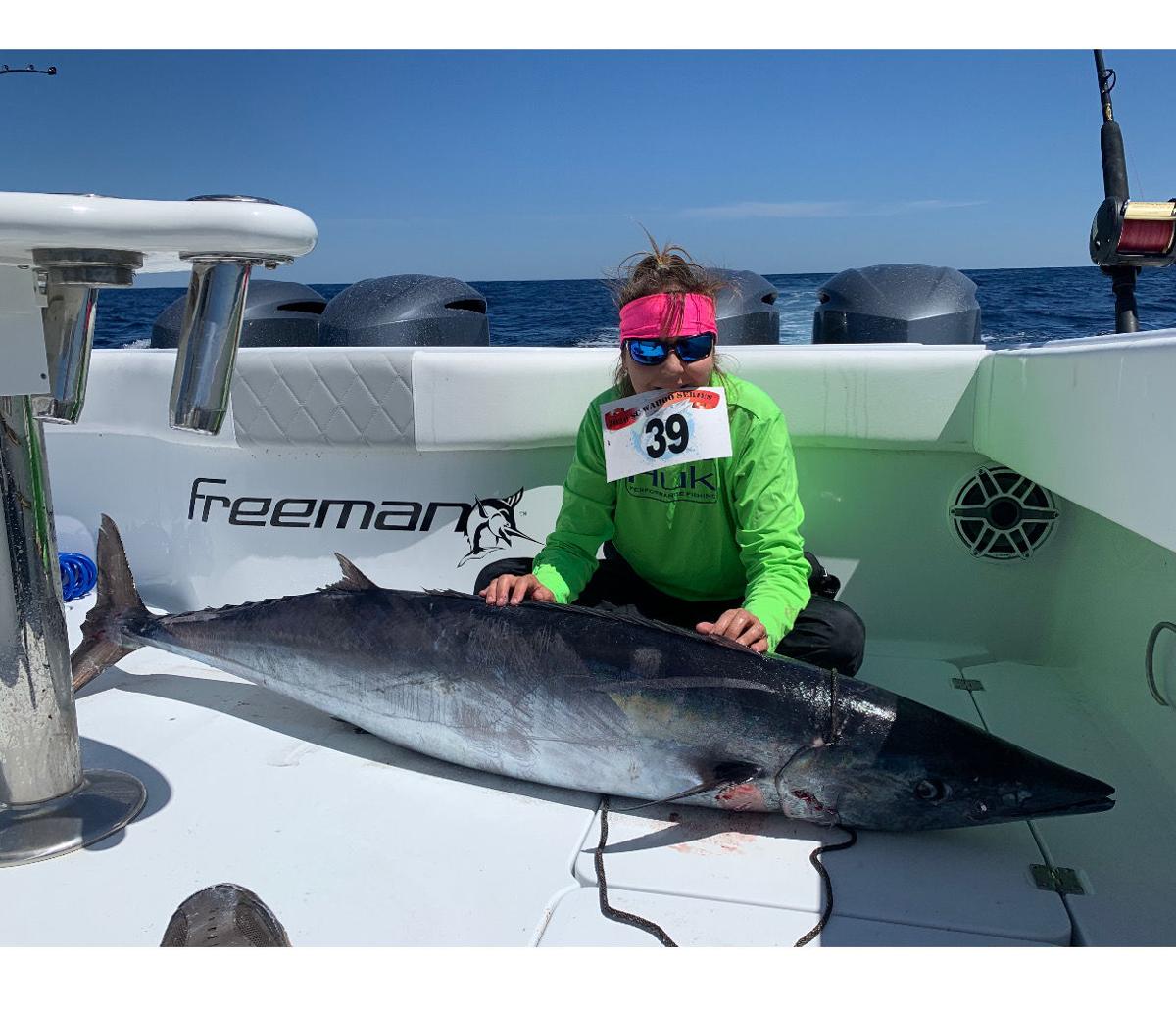 Tamesha Beck with her 98.3-pound wahoo that was the heaviest fish in the 2020 South Carolina Wahoo Series. Provided photo 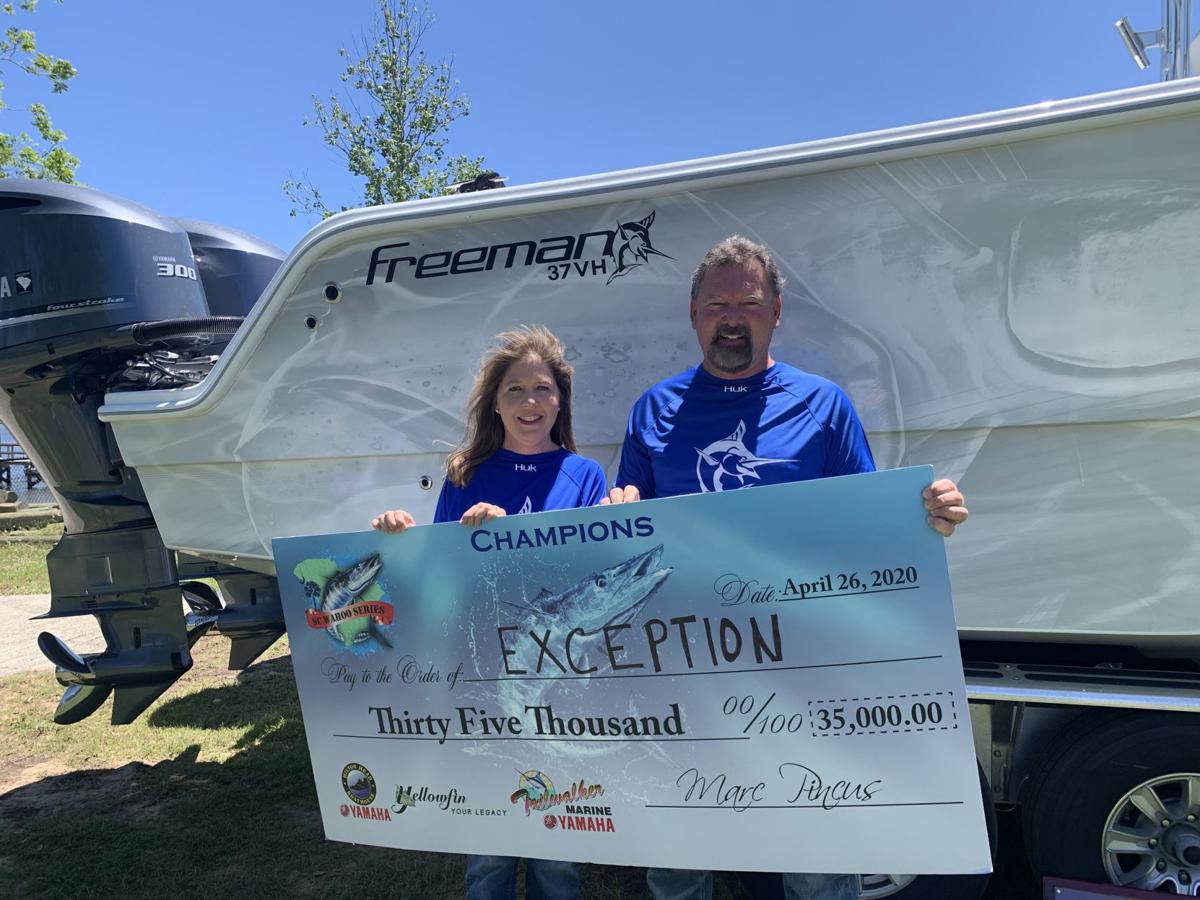 The husband and wife team of Morris and Tamesha Beck of Johns Island have some great and not-so-great memories while fishing in the South Carolina Wahoo Series.

The low point came in 2017 during the second year of the event when Tamesha broke her leg on their first fishing day. But that painful memory was erased this year when the two-person crew of Exception set their personal bests for wahoo to win the tournament and more than $60,000 against a fleet of 151 boats.

The Becks waited until April to declare fishing days. They weighed a 30.9-pound wahoo on April 4. On April 6 they came in with a 49.5-pound catch that was their largest-ever wahoo. But they topped that on April 11 when Tamesha boated a 98.3-pound catch, giving them a two-fish aggregate total of 147.8 pounds.

The top prize in the tournament was $35,000 but other categories pushed their winnings to $63,294. They won the High Roller and Big Fish categories and Tamesha was the Lady Angler Award winner. Plus, they expect to earn another $3,000 bonus from Yamaha.

When the Becks headed out in their 37 Freeman on April 11, Morris said he knew "we needed a 73- or 74-pound fish to take the lead. We were just praying for that."

Said Tamesha: "I told him, 'Let's hopefully get a good fish. What about 70 pounds?' He said 'No, we're going after a hundred pounder.' A hundred-pounder? All right."

"I said we were going after a hundred-pounder. I ain't messing with no 70 or 80," Morris said. "I was just joking. But it was the fish of a lifetime around here the way it turned out.

"We knew the fish was pretty good, but we didn't know it was that good until we got it closer to the boat. Seventy pounds plus is what I guessed, but we haven't caught a ton of wahoo. Our biggest before was 49 pounds in this year's tournament."

Asked what type of lure they used and whether they caught the huge fish high-speed trolling or low-speed trolling, the Beck's answered with an emphatic "Yes."

"That's something we're keeping to ourselves," Tamesha said.

"Everybody was calling us and asking that," Morris said. "They were calling us and the tournament is still going on and they're our competitors and they want to know what we're doing."

The Becks, who will celebrate their 28th wedding anniversary this summer, said they began wahoo fishing when Pincus started the wahoo series in 2016. They sold their business in Alabama two years ago, retired and moved back to the Charleston area where Morris grew up. They fish together, seldom taking anyone else along, and said they are very competitive with each.

"We are learning as we go as far as tournaments," Morris said. "We mainly started off dolphin fishing, but we wanted to try something different so we started fishing the Wahoo Series."

Their win this year helps make up for some not-so-memorable moments in 2017. In March on the first day of that year's Wahoo Series, Tamesha climbed beneath the helm to get something on their way out. The boat hit a wave and threw her backwards. At first they thought she had just tweaked her knee and they continued fishing. But when they got back to the dock Tamesha couldn't get out of the boat on her own, and a visit to the doctor revealed a clean break of the leg and a torn meniscus.

In September of that year, when they were still in Alabama telling their employees that they were selling the business, they received news from Charleston that  their home on Johns Island had been leveled by a tornado.

"I told Morris that this was our year. We got our house back, we got our new boat," Tamesha said. "This was the cherry on top, catching that wahoo."

The awards ceremony for the tournament was held April 26 at Hilton Head Harbor with only the top three teams present, spaced at proper social distancing, and broadcast live on Facebook.

Cannon Johnson, aboard Nonsense, was the top youth angler with 111.8 pounds that included a 68.8-pound catch of April 6 and 43-pound catch on April 21. His 68.8-pound catch also was the youth angler big fish category winner. Walker Weathers, aboard Tripple Gobble, was second in the youth division with two fish that weighed 97.9 pounds, and Hunter Huggins, aboard Reel Happy, was third with 93.1 pounds. Derrick Blanton, aboard My Boat, was the top senior angler with a 46.7-pound wahoo.

The tournament also had prizes for other species. Avaseata won the dolphin division with a 52.3-pound fish; Queen V had the top tuna at 29 pounds; and Mas Pescado won the amberjack category with a 53.9-pound catch.

The Georgetown Landing Blue Marlin Tournament, fished for the last 52 years over Memorial Day weekend, has been postponed until Aug. 12-15 because of the coronavirus pandemic.

The Bohicket Marina Invitational Billfish Tournament, which normally kicks off the South Carolina Governor's Cup Billfishing Series and was scheduled to be fished May 6-9, announced earlier that it was delaying its tournament until July 29-Aug. 1.

The two other events in the S.C. Governor's Cup Billfishing Series are the Carolina Billfish Classic, scheduled June 17-20, and the Edisto Invitational Billfish Tournament, scheduled July 15-18.