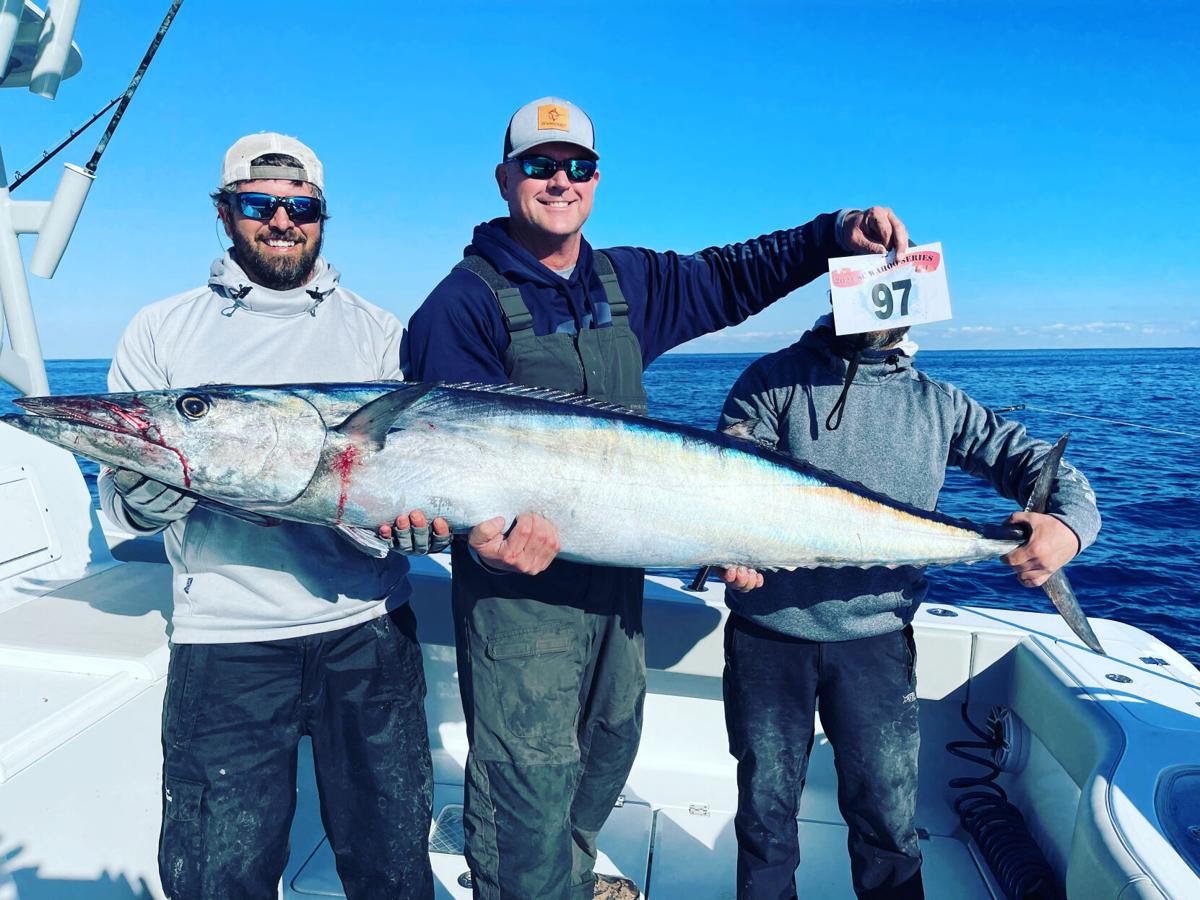 The crew of Mas Pescado, captained by Billy Freeman of Mount Pleasant, leads the S.C. Wahoo Series with this 80-pound catch. Provided photo 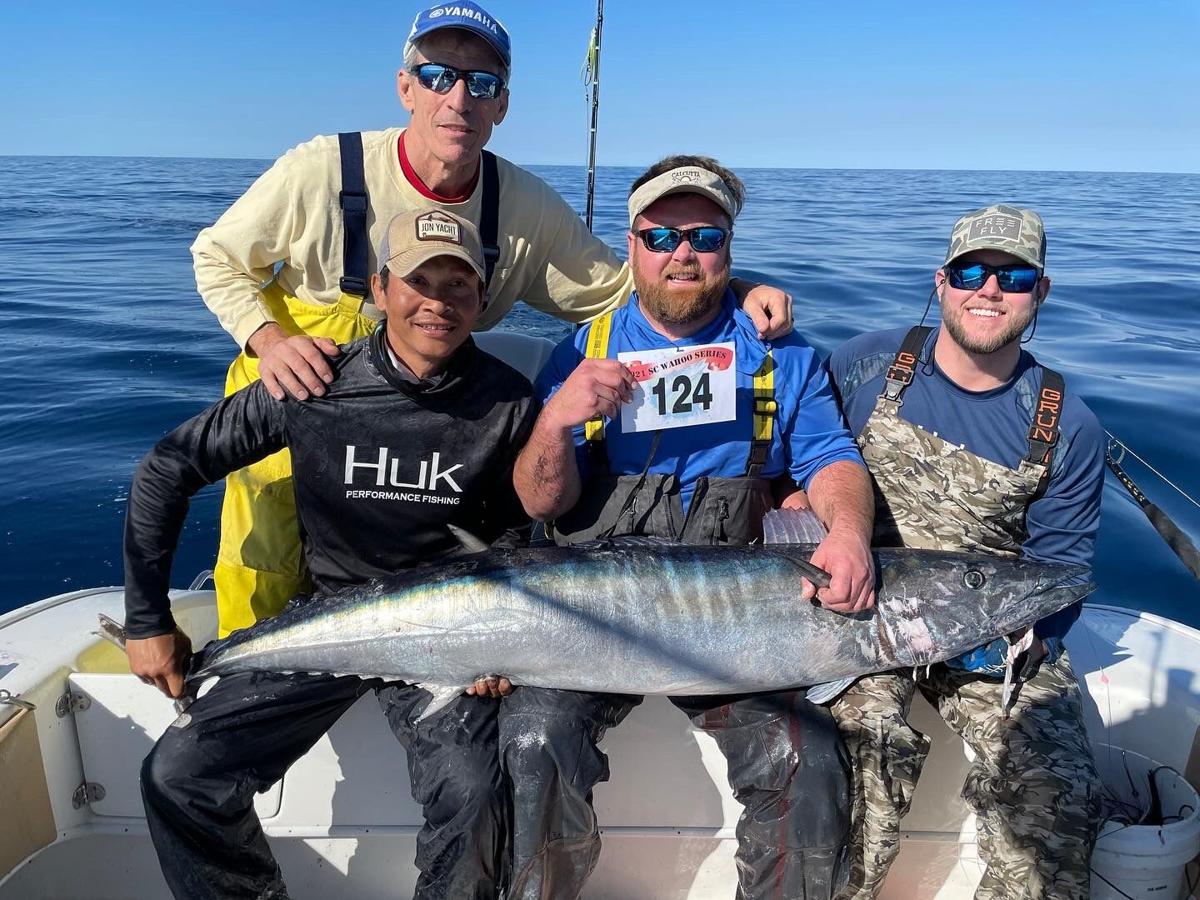 Swedish Fish of Charleston, captained by John Abbate, has the second-largest wahoo, 71 pounds, in the S.C. Wahoo Series. Provided photo 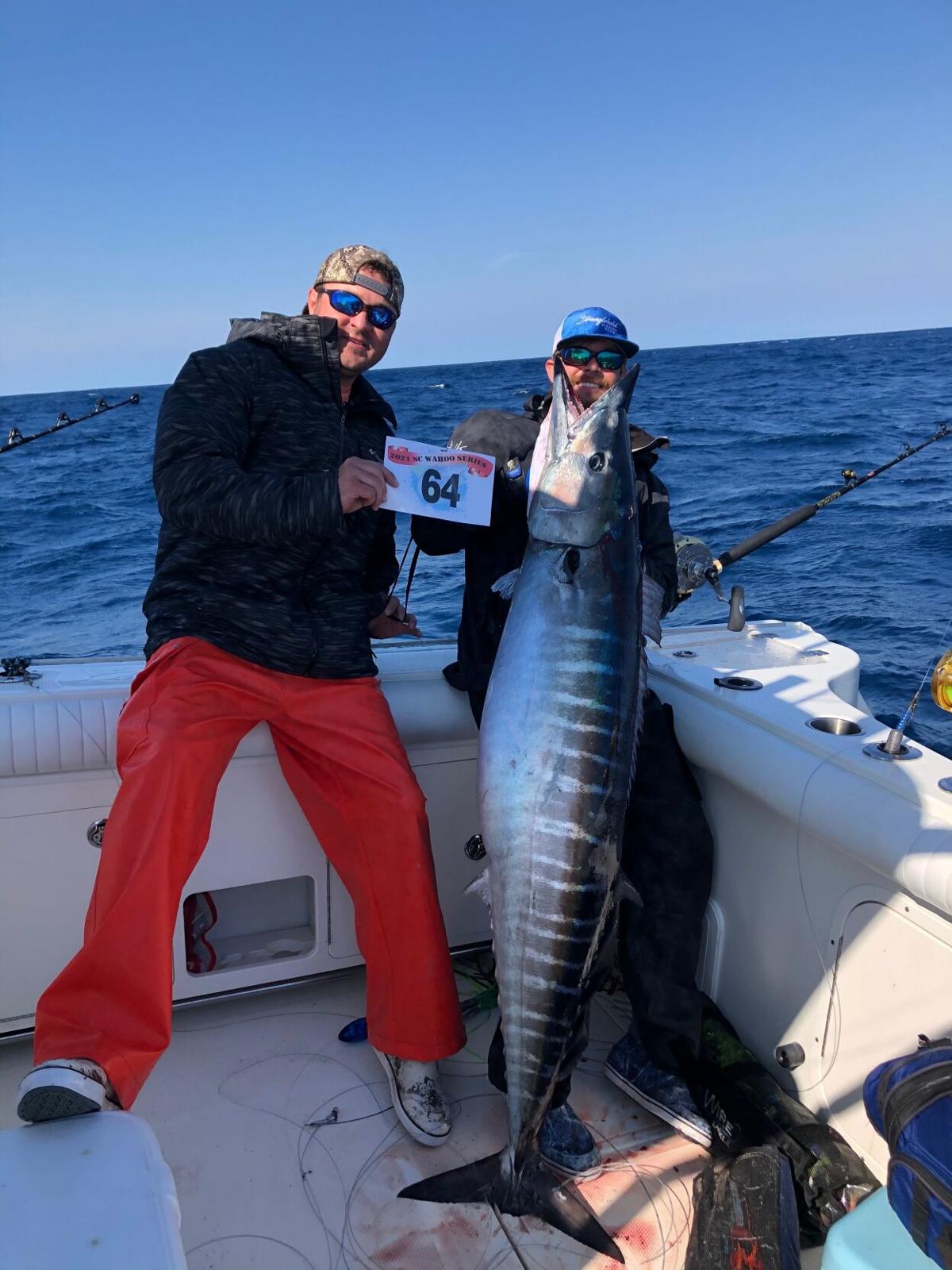 The big fish are biting as anglers approach the midway point of the 2021 South Carolina Wahoo Series, and tournament founder Capt. Marc Pincus says the best is yet to come.

"Traditionally, at least the last two years, the biggest fish has come in April. I think fishing is only going to get better from here," Pincus said. "Two weeks ago it really busted wide open and we had a nice run. And last week we had a really good run."

The S.C. Wahoo Series – which allows anglers to pick their three days of fishing, weigh one fish each day and count the two heaviest fish for the top prize – continues through April 24.

Mas Pescado, captained by Billy Freeman of Mount Pleasant, weighed an 80-pound wahoo on March 10. That same day, Capt. John Abbate's Swedish Fish out of Charleston, which finished second in the 2020

S.C. Wahoo Series, brought a 71-pound wahoo to the scales. On The Flip, captained by Cory Brumbelow of Charleston, narrowly missed cracking the 70-pound mark, weighed a 69.6-pound catch on March 10.

Four other boats landed wahoo weighing 60 pounds or more during a four-day period. On March 9, Game Hawg had a 69.0-pound catch and Dirty Martini had a 66.6-pound wahoo. On March 13, Stranglehold caught a 68.5-pound wahoo and Salty Cracker landed a 65.5-pound fish.

Mas Pescado is the overall leader in the tournament at this point, but Scallywag, captained by Heather Leman of Mount Pleasant, has a two-fish aggregate of 71.7 pounds. Swedish Fish, at 71 pounds, is third in the standings.

"Boats up and down the whole coast got into some good fish," Pincus said. "I fished Saturday (March 13) and I caught five right there where the big fish were caught but I didn't get my shot. Game Hawg had seven fish and (Mas Pescado) had a double-digit wahoo catch."

Pincus said that with the super moon coming up the fishermen are thinking it's going to be a great month. Anglers are looking for water temperatures of 70 degrees or more over structure to find their fish.

The husband and wife team of Morris and Tamesha Beck of Johns Island waited until April in 2020 to declare fishing days. They caught a 49.5-pound wahoo on April 6 and then landed a 98.3-pound catch on April 11 to win the series and $63,294. The 2020 series had 151 boats. This year's tournament has drawn 180 boats. The top prize is $40,000 plus additional cash in optional tournament levels.

This year anglers can compete in all three series, the S.C.  Saltwater Series sponsored by Huk, in a points race for the team of the year.

"I wanted to give these guys a competitive series trail for fishing team of the year, bragging rights and prizes. We want to try and build it up to make it really prestigious. All three are unique fish to catch with different styles of fishing. I was hoping to get 15 to 20 boats interested but we have 53 boats that have committed to fishing all three," Pincus said.

Pincus will be doing a live Facebook broadcast from Haddrell's Point Tackle in Mount Pleasant at 5:30 p.m. March 22, giving a series update as well as demonstrating how to rig wahoo lures and tips and techniques for catching wahoo.

Opening day for turkey hunting on private lands in the Lowcountry of South Carolina (Game Zones 3 and 4) is March 22, and hunters are reminded this year they are required to report their harvest electronically.

There are three ways to report your harvest. South Carolina Game Check is a smartphone app that can be downloaded. You also can go online and report your harvest through the S.C. Department of Natural Resources website (dnr.sc.gov). There's also a toll-free number (1-833-472-4263) for key punch entry.

Hunters should have received this information when they received their turkey hunting tags.

The seasonal bag limit for residents remains at three birds, no more than one per day, and hunters are limited to just one turkey during the first 10 days of the season. Non-resident hunters will be limited to two birds. State residents are required to purchase a set of three tags for $5 while the two tags for nonresidents are $100.