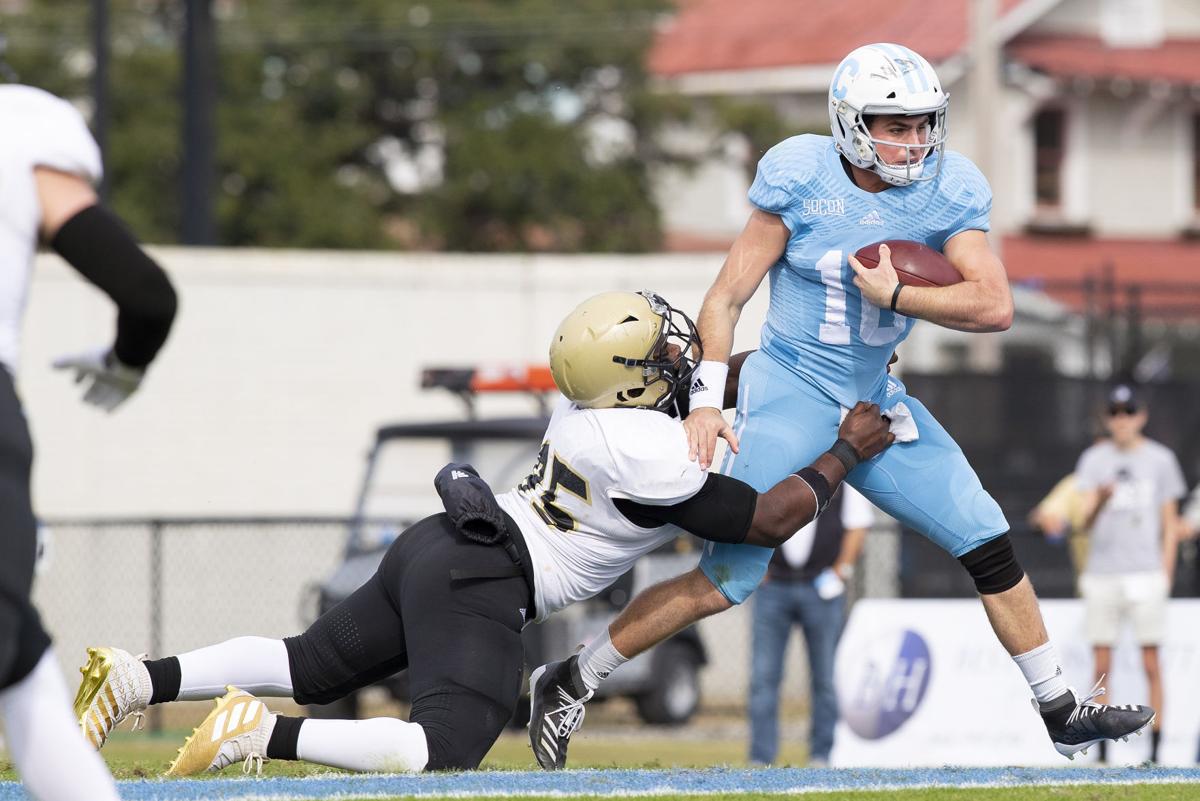 Citadel quarterback Brandon Rainey will coach one of the teams during the Bulldogs' spring game on March 7. Lauren Petracca/Staff 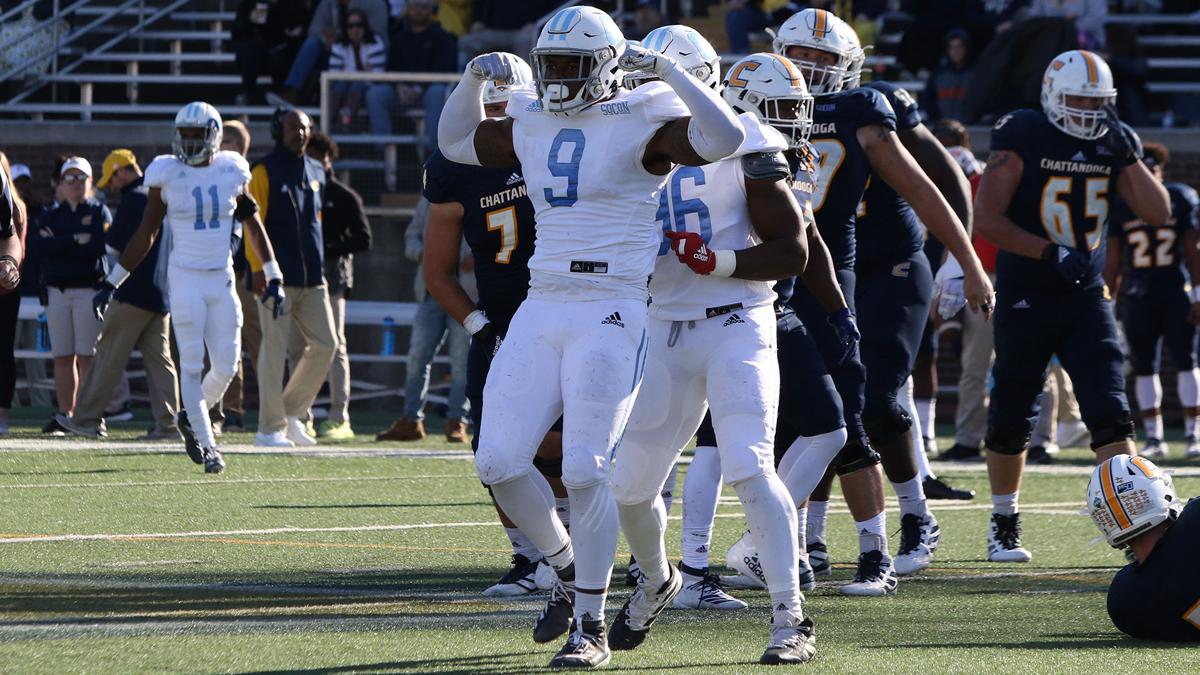 Citadel quarterback Brandon Rainey will coach one of the teams during the Bulldogs' spring game on March 7. Lauren Petracca/Staff

On Monday night, Citadel quarterback Brandon Rainey and linebacker Willie Eubanks III will meet in a room at Seignious Hall, the home of Citadel football.

Their task: Draft the players that will make up the teams for next Saturday's spring game.

"My draft strategy starts up front," said Eubanks, who will serve as head coach for one of the teams. "So I'm gonna get the offensive line and defensive line first, and then pick my skill players next."

Eubanks, the Southern Conference defensive player of the year in 2019, will match coaching wits and draft strategies with Rainey, the Bulldogs' starting quarterback who will coach the other squad.

"I'm just gonna draft the best available guys at each position," Rainey said. "I'm just going to go by feel and sort of wing it. I just like every chance I get to beat Willie."

With dad back home, James Island's Tereis Drayton is next man up for Citadel football

Player coaches and a draft are just a couple of the ideas that coach Brent Thompson dreamed up to add spice to the spring game, which is set for noon Saturday on Summerall Field, the parade deck on campus.

Perhaps the most radical idea Thompson came up with while on one of his daily runs around Charleston: Using XFL rules for the game.

The startup league has several features that are different from the NFL and college football, and Thompson saw the opportunity to put them to use.

"The last two weeks I've been watching the XFL, and I really liked a couple of aspects of it," Thompson said. "One thing I really like is the kickoff. During a spring game, you don't usually do a kickoff, because it can be a dangerous play. But the way the XFL does it is pretty safe, and it was a chance to get a special-teams play executed."

On kickoffs in the XFL, the kicker boots the ball from his own 35-yard line while his coverage team lines up at the other 35, just five yards from the return team at the 30. Neither team can move until the ball is caught by the returner.

The Citadel will also use the XFL extra-point format. Teams have the option of running a play from the 2, 5 or 10-yard line to score 1, 2 or 3 points.

"We have our punter (Matt Campbell) also playing place-kicker for us, so I thought the next best thing was the extra point rule," Thompson said. "And the more I thought about it, I said let's just play a game with XFL rules, and the kids will have fun with it."

XFL rules allow for a double-forward pass on a play as long as the first pass is behind the line of scrimmage. The teams will play four 12-minute quarters; overtime will be a shootout format, with the teams running one play from the 5-yard line in an attempt to score.

Rainey and Eubanks will be assisted by offensive tackle Prince Howard-Whitaker and receiver Raleigh Webb, respectively; none of the four veterans will play in the game.

With Rainey donning the coach's headset, available quarterbacks will include Cooper Wallace, Nathan Cronic and converted defensive back Jaylan Adams.

The draft has added some intrigue and motivation for the players.

And what will Thompson do during the game?

"I'll be commissioner," he joked.

Adams, a redshirt sophomore from Johnson City, Tenn., moved over from defensive back this spring and could get in the mix for the backup role behind Rainey in the fall, Thompson said. Redshirt freshman QB Evan Schickel is sitting out the spring after shoulder surgery.

"Jaylan, it's really been a pleasure to see him pick it up so quickly," Thompson said. "Originally, we just had a small package for him, but he's been able to expand it to where he can execute about 90 percent of our offense right now. Schickel will be back in the fall, and Cooper Wallace has gotten some good work out here and has come a long way.

"Logan has really done good job this spring, and I like the way the offensive line has come along. On defense, we've been testing Destin Mack at corner and safety, and we really like the way Andy Davis is playing at inside linebacker. (Linebacker) Marquise Blount has had a good spring coming off of injury. You wouldn't even know it, the way he plays so physical. And (defensive tackle) Dalton Owens has had a really nice spring. I don't know if we'll play him much in the spring game, because he doesn't really need much more work."

• Citadel football players Ryan McCarthy and Lane Botkin are not participating in spring practice this year while they play with the baseball team, and both are off to good starts for the Bulldogs, who have won nine of their first 10 games.

McCarthy, a receiver/outfielder, is batting .316 with six doubles and nine RBIs going into Sunday. Botkin, a defensive back/outfielder, is hitting .333 with four RBIs through nine games.

The football team attended Friday's game against St. Peters, with Eubanks throwing out the first pitch. It hit the dirt.

"The ball slipped out of my hand," he explained. "I was trying to throw a curveball."

Where: Summerall Field on campus