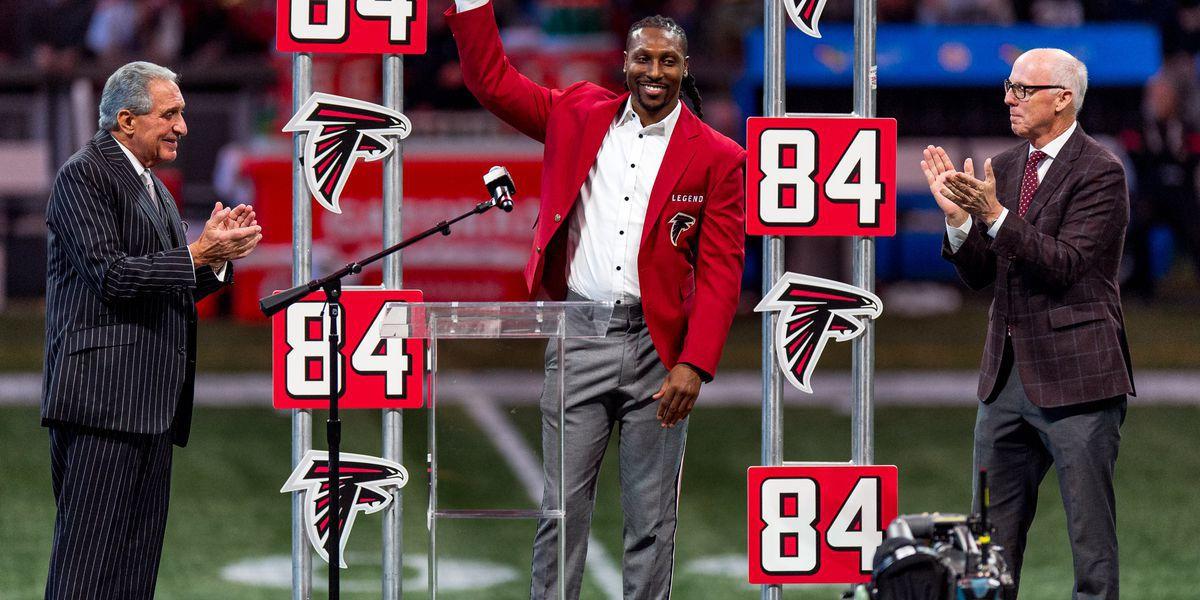 Roddy White entered the Atlanta Falcons Ring of Honor on Sunday, Dec. 8, 2019, during a halftime ceremony at the Falcons’ game against the Carolina Panthers at Mercedes-Benz Stadium. AP photo 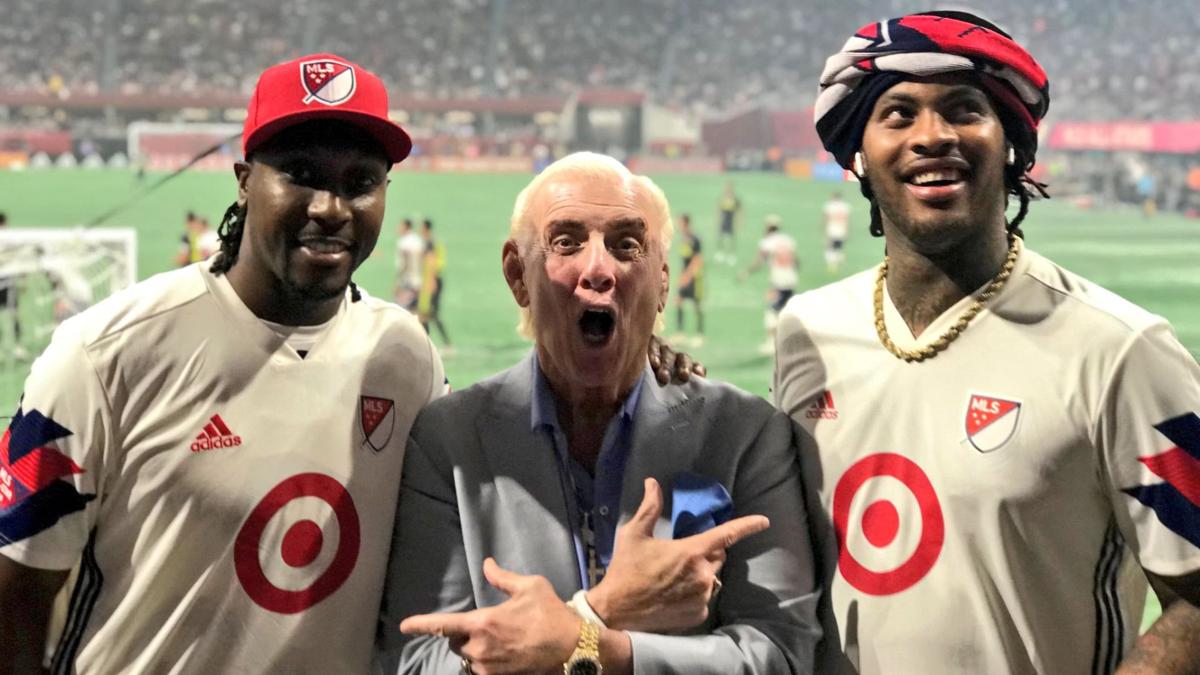 It may have been longtime ESPN broadcaster Chris Berman, noted for creating amusing nicknames for athletes, who first tabbed Roddy White with the moniker on a national level. But “Rowdy Roddy” was first exposed to that name years earlier on James Island.

It might come as no surprise that Roddy, who as a youngster became part of our extended sports family, first heard that name on those same fields where he excelled in football, baseball and just about any sport he chose to suit up for.

And when it came to wrestling, he was often the first to ask if I would take him to the local professional wrestling shows.

He loved the sport and its colorful stars like “Rowdy Roddy” Piper and “Nature Boy” Ric Flair. Many of my former players became fans, and Roddy (birth name “Sharod”) was one of the biggest.

Little did I know at the time, though, that young “Rowdy Roddy” White would continue to cultivate his passion for the type of athletic competition that wrestling afforded.

Roddy began wrestling in high school at a smallish 112 pounds (100 pounds lighter and more than eight inches shorter than his eventual NFL playing size) before working up to 152 as a junior and maxing out at 189 as a senior. Until he hit a couple growth spurts, he thought he was going to be a wrestler.

“I wrestled before I played football,” he said. “I thought I was going to be a wrestler who won state championships and eventually would make it to the next level. I had seen so many people in my family go out and win state titles. It was like a family tradition. It was what we do.”

Like other sports, Roddy would excel in wrestling, winning two state championships. In his senior season, he defeated an opponent 20 pounds heavier, impressing the crowd at the old Carolina Coliseum in Columbia that day with his technique and determination.

C.M. Punk could be headed for WWE showdown with Seth Rollins

But as much as Roddy loved wrestling, football would be his ticket to that next level. And his wrestling background would contribute to his eventual success in the NFL.

With wrestling in his side pocket, Roddy White became an overachiever who set receiving records at James Island High School and Alabama-Birmingham, where as a senior he caught a mind-boggling 71 balls for 1,452 yards and 14 touchdowns, the only receiver in the nation averaging better than 20 yards per reception with more than 60 catches.

When Atlanta Falcons scout and former NFL great Boyd Dowler was conducting a background check on White, a highly touted prospect who was looming as the Falcons’ top pick in the 2005 draft, I assured him that Roddy was not only a talent who would benefit the organization on the field, but a teammate who would be loyal, dedicated and intense, the same qualities that he had cultivated from wrestling.

While he might need a gentle push or two at times to get him going, there was no one more committed to winning than Roddy. If they could harness that potential, Atlanta would surely have one of the most productive players in the league.

Follow-up calls from Dowler reaffirmed what I already knew. With a keen sense of his image and standing in the community, team owner Arthur Blank was a stickler for integrity, a quality the league has increasingly strived for, and the organization couldn’t afford to make a mistake with its first-round draft pick.

They didn’t with Roddy, who was selected by the Falcons as the 27th pick in the first round of the 2005 NFL Draft.

While he struggled to play up to his potential his first two seasons, with a few “gentle” pushes he eventually became the all-star that everyone knew would emerge. And he never looked back.

Physically gifted at 6 feet tall and 212 pounds of muscle, White brought a wrestler’s mentality to the position of wide receiver. With great hands, good size and vertical speed to burn defenders, he used leverage and a strong upper body to his advantage, making him one of the league’s better blocking wideouts. They were the same skills he had used on the wrestling mat.

Defensive backs, some with no knowledge of White’s wrestling background, soon learned that Roddy was not one to be bullied on the other side of the line.

“I know I’m doing a good job on defensive backs because their coaches yell and cry to the referee all day about me holding and stuff like that,” he once said proudly.

Always locked and loaded, White became a football version of wrestling hero Ric Flair — a trash-talker who could talk the talk and walk the walk.

Several years ago, after being presented with a State Farm Falcons Player of the Week championship belt, White channeled his inner Ric Flair and cut a classic pro wrestling promo that even the Nature Boy would have been proud of.

“This is my moment,” he said before launching into his spiel. “I just want everybody to know you’re talking to the Rolex-wearing, diamond ring-wearing, kiss-stealing, wheeling-dealing, limousine-riding, jet-flying son of a gun. I’m having a hard time keeping these alligators under me right now! Wooo!!!”

Like 16-time world champion Flair, Roddy let his play do the talking.

Ranked firmly among the NFL’s elite wideouts, White would become a major weapon for the Falcons, setting records, playing in Pro Bowls, and becoming one of the greatest receivers in franchise history. And he wore the colors proudly, becoming a favorite of teammates and Falcons owner Arthur Blank, who would call White “the perfect role model.”

Outspoken, sometimes even labeled a loose cannon, Roddy has always had a special place in his heart for wrestling, amateur and pro.

He would come to the sport’s defense when the International Olympic Committee made the ill-advised decision in 2013 to drop wrestling, a sport which has ancient roots in the Olympics and had been on the program of every modern games except 1900, from the group of “core sports” for the 2020 Summer Olympics.

“Wrestling’s been around since the Olympics,” White said at the time. “Before they started introducing all these other sports, there was wrestling. To eliminate the oldest sport in the world is crazy.”

White also noted the mass appeal of the sport. Taking it away, he said, would deny many aspiring athletes the chance to chase a dream.

Seven months after losing its Olympic place, wrestling was reinstated for the 2020 Games when the IOC overturned a decision many members thought was a mistake.

USA Wrestling, which considered White an ideal spokesman for a campaign to link the benefits of wrestling to football, invited him to its USA Wrestling Olympic Training Center in Colorado Springs, Colo., in 2011. He took 10 wrestlers and a coach from his high school alma mater along with him and paid for the contingent to make the trip.

Roddy said his football training paled in comparison to his time on the mat.

“I tell people to this day that football training is not even close to how hard I had to train to get ready for wrestling matches. Just to get ready for a six- or seven-minute match is grueling. Training camp — getting yourself ready and prepared for the whole season — is the hardest thing we do in football. You go to wrestling practice for two weeks, and it makes football look like a breeze.”

To White, wrestling was a great sport for discipline and it breeds toughness — two elements necessary in the NFL

“That’s what a lot of people don’t understand ... just how grueling that sport is, You have to prepare yourself for that grind and get yourself in shape to do all that stuff.”

His initial exposure, though, were those pro wrestling shows back in the day.

“I love wrestling. I used to have a blast at all those shows,” he recalled. “It’s very entertaining. And you have to be in great shape to do what they do.”

Cody Rhodes forging his own legacy in All Elite Wrestling

Roddy White, who finished his career in 2016 as the Falcons’ all-time leading receiver, became the 11th player inducted into the team’s Ring of Honor in a special ceremony last Sunday at the Mercedes-Benz Stadium. One of the most beloved players to ever don the red and black, White’s No. 84 joins a list of Falcon greats that includes Warrick Dunn, Deion Sanders, William Andrews, Steve Bartkowski and Tommy Nobis.

Adhering to his vow that he would “always be a Falcon,” the 38-year-old White was a franchise fixture over the course of an entire decade. During that time, he caught 808 passes for 10,863 yards and 63 touchdowns, numbers that were team records. His 63 touchdowns also are more than any other Atlanta player has scored.

He was also an all-star off the field. With a charismatic personality and trademark smile that won over the hearts of Falcons fans over the years, his work ethic and willingness to provide counsel and help younger teammates such as Julio Jones was just as important to the Falcons as his on-field accomplishments.

“He paved the way for a lot of guys, myself included, being a wide receiver here,” said Jones. “He taught me the way to play the game, so I’m going to pass it down to these guys now.”

But that’s always been a hallmark of Roddy White. A student of the game, he paid his dues and more in order to be great while showing others what it takes to be a professional athlete.

How would be want to be remembered?

Simply for “giving everything he had.”

Mike Mooneyam column: Robert Bedard, much better known to generations of wrestling fans as Rene Goulet, a highly respected performer who wore a number of hats during his decades in the business, passed away on May 25 at the age of 86.

It really didn’t matter to Randy Colley if he was wearing face paint, behind a mask, or chewing on a bone — as long as he was doing the thing he loved most. The former pro wrestling star died on Dec. 14 at age 69.

Pierre Carl Ouellet's recent resurgence in Ring of Honor has been Rocky-esque, and it’s a testament to never giving up on your dreams.