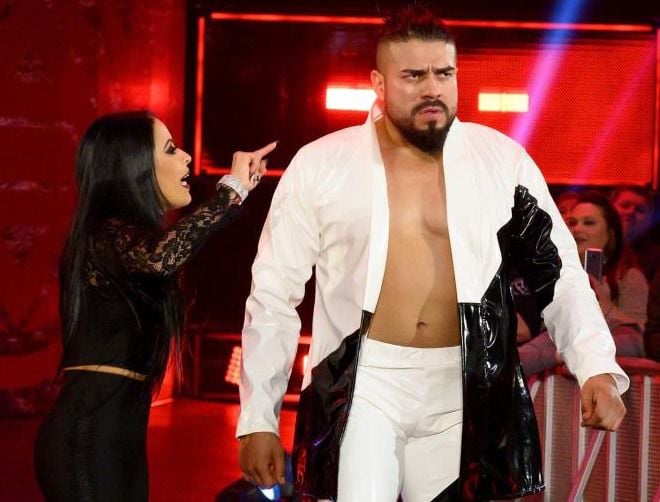 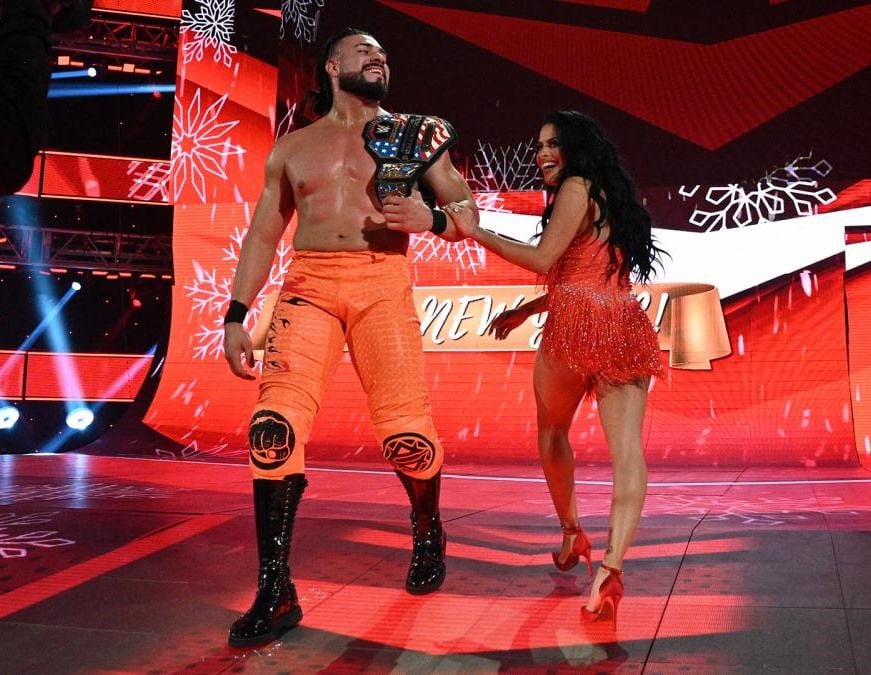 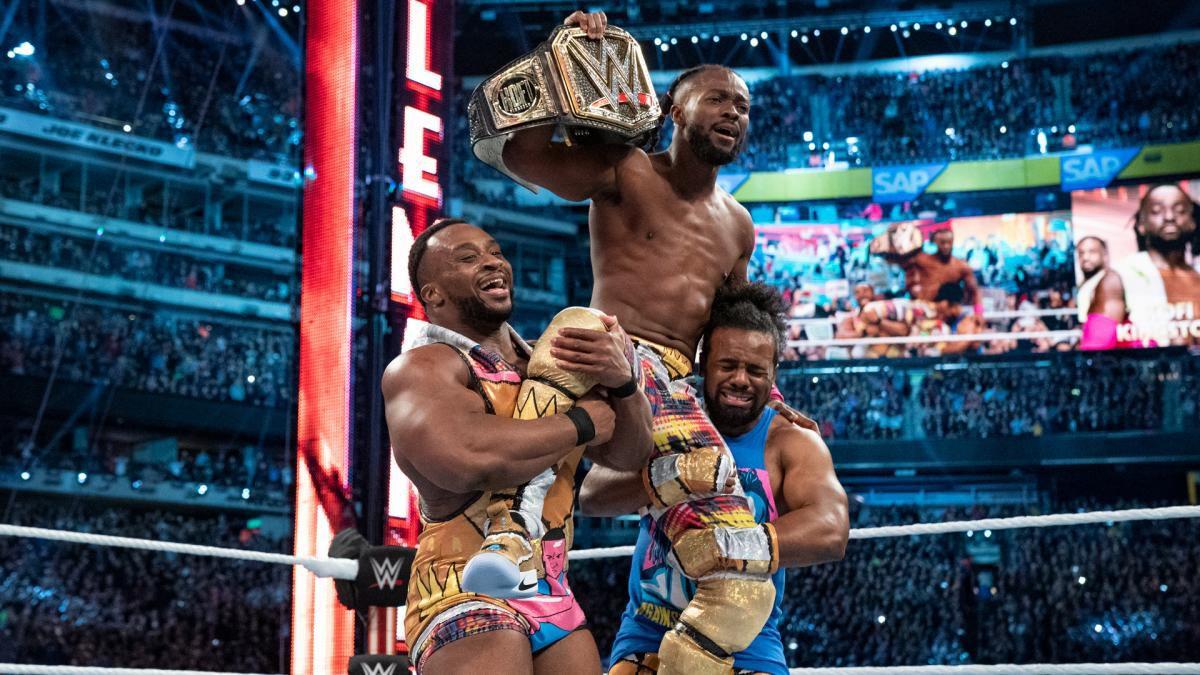 On the shoulders of New Day brethren Big E and Xavier Woods, Ghanaian-born Kofi Kingston hoists the WWE championship in front of a packed MetLife Stadium at Wrestlemania 35. WWE photo

The fact that World Wrestling Entertainment has become a more truly diversified international brand was underscored in a recent feature in the New York Post on U.S. heavyweight titleholder Andrade.

The 30-year-old Mexican-born star, whose real name is Manuel Alfonso Andrade Oropeza, claims to represent the new generation of Latino superstars in WWE.

“The WWE is a company that’s in the world,” the third-generation luchador told the Post. “There are many languages. There’s India, there’s Spanish, Japanese, Chinese, many languages.”

That statement is reflected by the current list of champions in WWE who speak little English during their interviews.

Intercontinental champion Shinsuke Nakamura and WWE women’s tag-team champs The Kabuki Warriors (Asuka and Kairi Sane) — all from Japan — have utilized “mouthpieces” (managers) to get their messages across to the audience.

Andrade, who began his wrestling career at the age of 13 in Mexico, credits “business associate” Zelina Vega, who was paired with him in NXT prior to his arrival on the main roster, with much of his success.

“Now it’s part of Andrade,” he told the Post. “Sometimes when Zelina is injured or something, sometimes when I go to the ring and Zelina’s not in my corner, something is confused or like I forgot something. Now Zelina is beside Andrade. Andrade is beside Zelina. Now it’s a team.”

The 29-year-old Vega, whose real name is Thea Trinidad, was born of Puerto Rican descent in Queens, N.Y., and is married to Dutch wrestler and WWE star Aleister Black (Tom Budgen). She grew up watching wrestling, with Rey Mysterio as her inspiration.

It’s superstars like former WWE champions Mysterio and the late Eddie Guerrero with whom Andrade wants to be compared as part of that new generation.

“Always Rey Mysterio was the face of Latinos (and) in the past Eddie Guerrero,” said Andrade, the former masked El Sombra in his native Mexico and once touted as a potential modern-day Mil Mascaras in this country. “Now is my moment to be the face of the Latinos in WWE. It looks strong to win the title, no? I’m more strong with more opportunities and focused on the next title.”

Andrade told the Post that he practices his English whenever he can, noting he works with his fiancée on “every drive, on the side, when we’re home.” He also has begun to mix English and Spanish into his promos more.

“I am trying to practice for the future (for) great promos in English and a little Spanish, you know the promos before with Rey Mysterio and, in the past, Eddie Guerrero,” said Andrade, whose engagement to 10-time WWE women’s champion Charlotte Flair (Ashley Fliehr) was announced on New Year’s Day.

“It’s a powerful thing to have representation, and it’s also a powerful thing to be able to see somebody that looks like you, and have them tell you, firsthand, the struggle and what it took to get there. And I think it’ll be balanced and great for the sport of wrestling, not from just a color standpoint but from an exposure standpoint. We need to have our kids exposed to seeing great talents like Kofi Kingston.”

Comparing WWE’s current roster with when he first signed with WWE, Henry noted the dramatic difference.

“I don’t think they have a diversity problem,” said Henry. “When I came into wrestling there were three people, three black people in the company. There is growth. There is a future for the African-American in pro wrestling, and you know, I want to be a part of that as much as I can.”

WWE star Titus O’Neil says he is proud of the company’s diversity efforts.

“In the 10 years I’ve been with the company, I couldn’t be more proud of how far we have come,” O’Neil told Sports Illustrated. “At some point anybody can pick out a race or a gender and say they should be doing more with this person or with that person. We’re a television show that is live 52 weeks a year. We’re a global brand, and we have representation not just of minorities, of African-Americans or Hispanics, but we have people from all over the world. And everybody can’t be a champion at that time. But what we can all we can do is exude the best characters on television and be the best characters off television that we can possibly be. I think our company has done a tremendous job in growing in itself in regards to our social awareness and our social impacts in communities year-round. I’m proud to be a part of that transformation.”

And the impact of the women’s revolution is still being seen in WWE, where Raw women’s champ Becky Lynch — born Rebecca Quin in Limerick, Ireland — has become one of the hottest properties in the company. Rhea Ripley (Demi Bennett of Adelaide, Australia) holds the NXT women’s title.

At last year’s Wrestlemania, a women’s match headlined the show for the first time in history.

While WWE has made great strides in recent years to improve diversity within its ranks, there remains more to be done.

AEW executive and performer Cody Rhodes, who left WWE in 2016 after nearly a decade with the company, said last year that diversity was a part of the plan for his new company, and that meant diversity in performers, styles and matches.

Noting how promoters often instituted racial quotas in wrestling’s regional days, Rhodes said, “The old territory system of ‘just one’ — and a lot of folks may remember that — that’s out. The best wrestlers are going to field the game, and that’s a very diverse profile. And I’m really proud of it. But I know we’re going to make that — we’re going to promote them as wrestlers. That’s all the elements of diversity. We’re not going to make it a PR element for us. And that I’m really proud of, because it’s about the wrestling.”