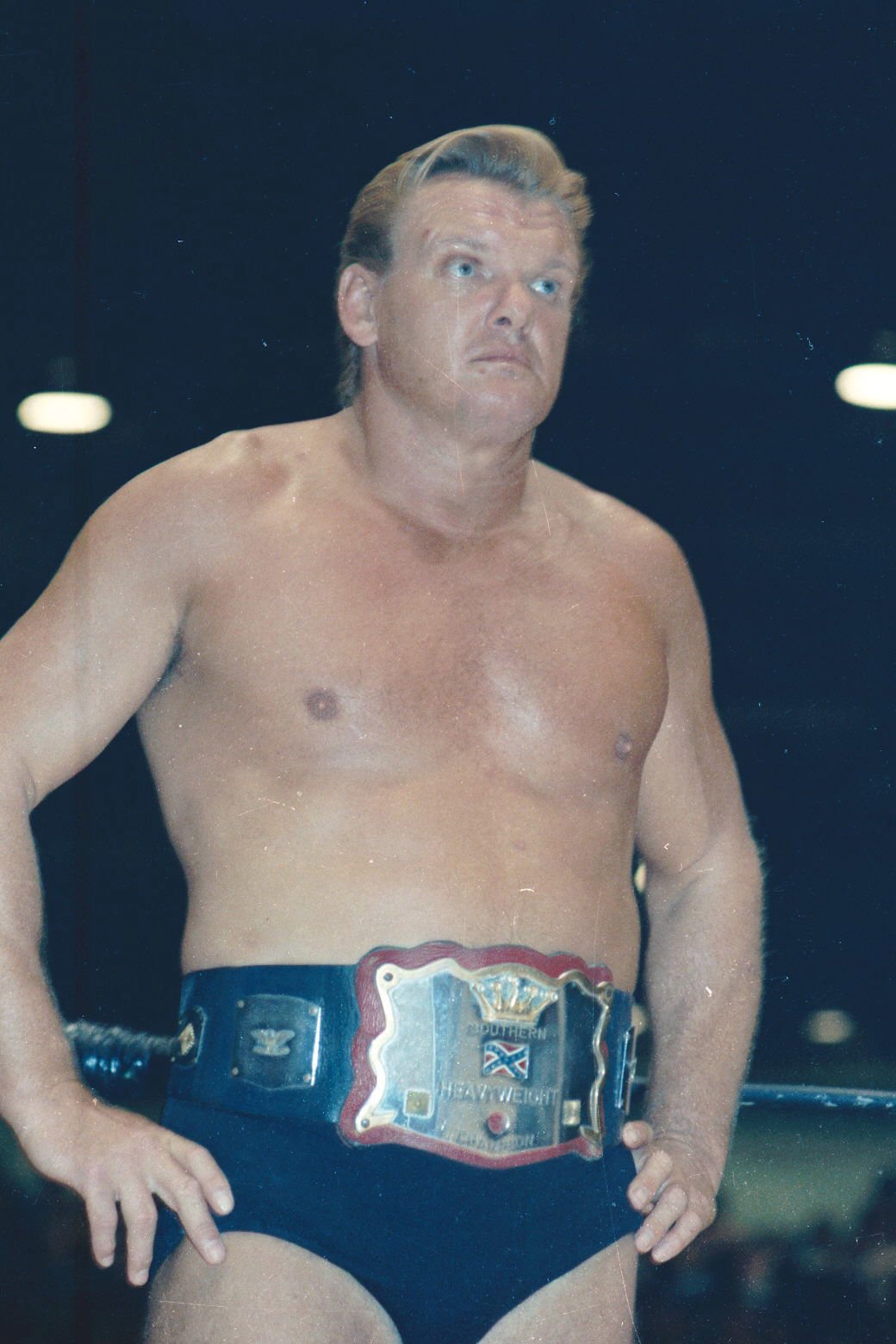 Johnny Valentine was one of the most famous heels of his era. Photo provided/Chris Swisher 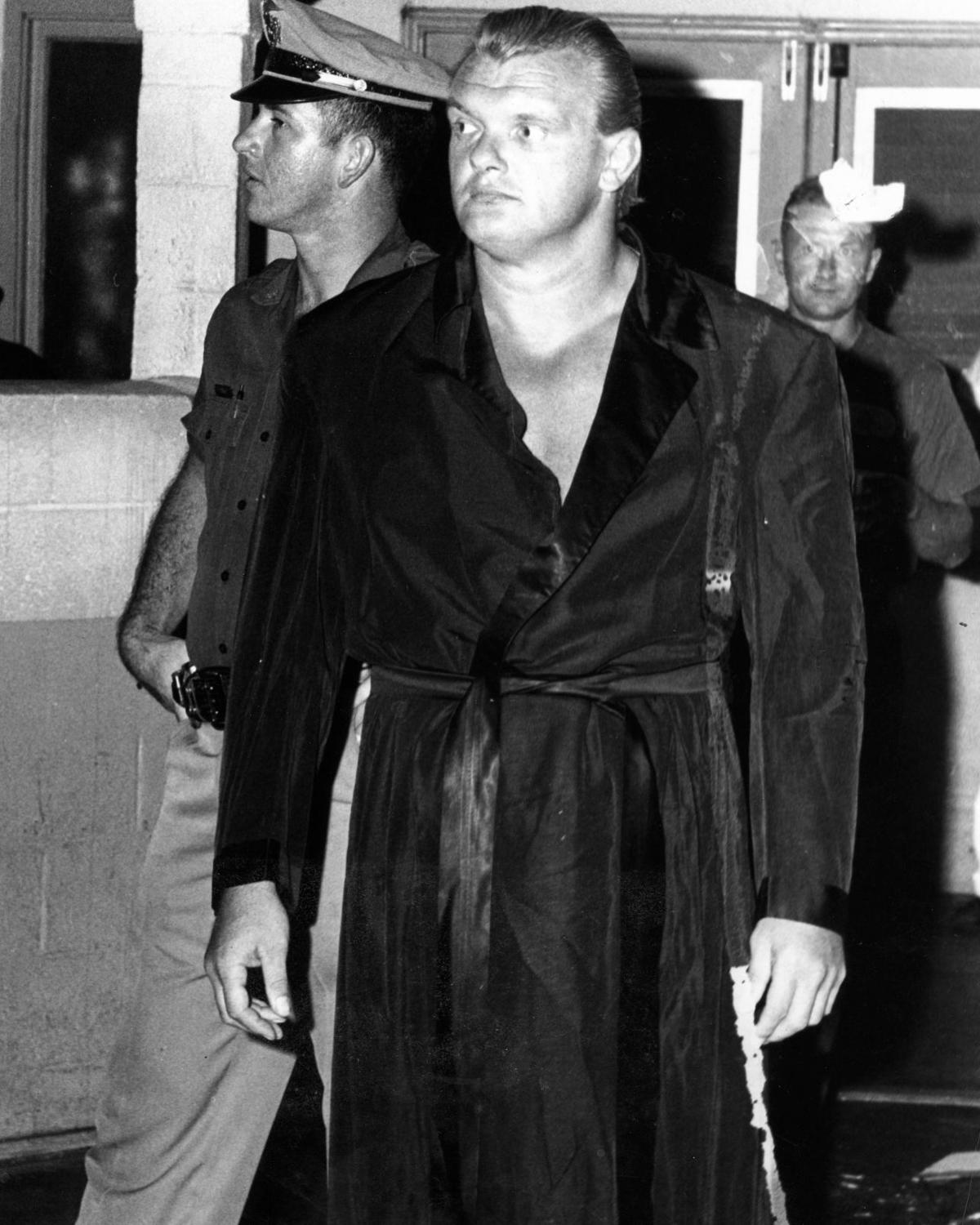 Johnny Valentine is escorted to the ring by security. Photo provided/Chris Swisher

That wasn’t just a catchphrase for Johnny Valentine.

It was the hard-hitting truth.

“I sure believed he was real,” said longtime fan Dan Thomas. “Nobody hit harder.”

Johnny Valentine was, indeed, one of the toughest men to ever step inside a pro wrestling ring.

He earned his respect the hard way – with blood, sweat and tears. And he insisted that promoters call him “The Champ.”

“If you ever saw him, you could never forget him. Nobody like him ... ever,” said John Hitchcock, a Valentine devotee since the days “The Champ” was wreaking havoc in the Mid-Atlantic territory during the 1970s.

Valentine’s style was deliberate and methodical, but when he landed blows, the impact could be heard throughout an arena. A no-nonsense battler, Valentine gained the respect, and sometimes fear, of his opponents.

If one wasn’t willing to give and take during a match, Valentine was more than ready to force the issue.

A product of an era where wrestling was promoted as a contest and grapplers were judged by their toughness as well as their ability, Valentine ranked at the top of a lofty list.

At a time when major territory titles meant something, he was the top man every place he went, from Charlotte to Seattle to Tokyo.

At 6-3 and 250 pounds in his prime, Valentine was an imposing physical specimen who was known not only for dishing out brutal punishment to his opponents, but also for taking punishment as well.

Perhaps no one ever did a better job of conveying believability and realism in pro wrestling than Johnny Valentine. It was his raw strength and stiff style that captivated audiences; he readily admitted that he never threw an easy punch.

Valentine wanted to leave no doubt among fans that he was the real deal, even if some were skeptical about the rest of the show.

And for those who ever saw Valentine do battle with warriors like Wahoo McDaniel, any doubts were surely erased.

Their matches from Texas to Florida to the Carolinas were some of the bloodiest and fiercest matches ever witnessed in those territories.

Former Charleston resident and wrestling personality Steve Prazak was one of those fans who was made a believer by wrestlers like Valentine and Wahoo.

“Just as my increasingly jaded self was beginning to figure out this whole pro wrestling ‘thing,’ here comes Johnny Valentine and Wahoo McDaniel legitimately and visibly beating each other up to a welt-rising pulp and making me a believer once again,” recalled Prazak.

“Wahoo and Flair and Valentine were famous for throwing those chops and bruising each other’s chests and causing the blood to flow,” Superstar Billy Graham said. “They’d stand in that corner and chop each other like there was no tomorrow.”

Late wrestling great Sandy Scott witnessed his share of bloodbaths between the two.

“He was tough, he was strong, and I’m telling you, if you didn’t get your hands up and fight him, he’d beat you to death with his own hands,” McDaniel once said. “I’d hit him as hard as I could. I’d beat him with that strap, and goose pimples would come on him. But I think he liked it. John was as tough as any man I ever crawled in the ring against. He was a great wrestler, he had a lot of talent and he was a very smart individual.”

Valentine’s career was cut short by an airplane accident in 1975 that would change the course of professional wrestling history.

Valentine, at that time a 27-year veteran and the biggest star in the booming Mid-Atlantic area, was aboard a twin-engine Cessna 310 along with a group of other wrestlers, en route to Wilmington, N.C. Accompanying Valentine on the 200-mile trip were David Crockett, Tim Woods (the original Mr. Wrestling), Bob Bruggers and a 26-year-old rising star named Ric Flair.

The fateful trip ended in tragedy. Just miles away from its destination, the plane ran out of gas and crashed, killing the pilot and injuring its passengers, with Valentine suffering an injury that would end the career of one of the greatest performers in the history of the sport. As fate would have it, Valentine initially had taken a seat in the back of the plane, but moved to the front next to the pilot at the request of Flair.

“I was in the back playing chess with Tim Woods,” Valentine would recall. “Ric Flair talked me into the front seat. Flair absolutely didn’t want to sit up front with the pilot. Something must have told him. I said, 'What the hell, we’ll play later.’ Otherwise he could have been in my condition.”

The plane plunged four thousand feet and landed on top of a tree.

With his arms braced against the dash of the aircraft, Valentine took the full brunt of the seats, the wrestlers and the baggage as they slammed forward into him, breaking his back in three places.

A piece of bone lodged in Valentine’s spinal column caused major damage, and Valentine used crutches the rest of his life.

Although in his late 40’s at the time, Valentine was still a major draw and likely had many good years left in the business.

Valentine, born John Theodore Wisniski, was a wrestler everyone feared and respected. When he boasted that he would make fans believe, he wasn’t exaggerating.

“Definitely a true comment for a great worker like Johnny Valentine,” agreed mat great Buddy Colt, who credits Valentine with encouraging him to break into the wrestling business.

Colt, who teamed with Valentine in Florida during the ‘70s, had been a big fan of the blond bruiser dating back to his pre-wrestling days.

“I first met him at Vic Tanny’s Gym in Washington, D.C., about two years before I got into the business,” says Colt. “It was the year I took second in the Mr. Washington, D.C., physique contest. I was selling cars at a Ford dealership then, so I got to talk to Johnny a lot.”

Next time the two crossed paths was three years later in a Houston dressing room.

“He was looking at me and said, ‘I know I know you, but I can’t place where.’ I told him it was Vic Tanny’s Gym in Washington, D.C., about three years earlier. He was such a great worker who really knew how to build that heat. He was terrific in the ring. He did nothing fancy. You didn’t need flying head scissors and flips off the ring. You need something the people can believe in.”

WWE Hall of Famer Jerry Brisco was young in the business when he first locked horns with Valentine, but recalled how tough the athletically built Valentine was inside the ring.

“I had so many hour matches with JV I finally went to (Jim) Crockett to ask if I had heat with him. I was getting the heck beat out of me every day and loved it.”

“He and Wahoo headlined almost every Friday at the Sam Houston Coliseum for over three years,” recalled Richard Egner. “Several times world’s title bouts were semifinals as nobody could go on after those two.”

“Saw him many times against Wahoo in strap matches at the Asheville Civic Center,” said David Isley. “When Johnny came out behind the curtains, the fans scattered and got nowhere near him. He was actually believable.”

“Best match of my life was Valentine vs. Paul Jones, headlining Camp Lejeune,” recalled Gary Bacon. “I think it went to time limit. I was ringside about 4-5 rows back. At one point they were toe to toe just chopping each other. Their sweat was all over us. I was just a kid but never forgot. That was real!”

“I feel sorry for those of you that never saw JV live. The man was a wrestling machine,” chimed in Tarron Coalson. “I was fortunate enough to grow up in Greensboro and watched many Johnny Valentine vs. Wahoo McDaniel matches. Those matches built Crockett’s territory. Anybody watching those two made wrestling believable.”

David Fuller of Fort Worth, Texas, credits Valentine with helping him break into the business.

“Johnny’s health was worsening. In October 2000, doctors gave him days. He lived until April 2001. He fought ‘til the end. The toughest man I have, or ever will, meet.”

The supreme compliment may have come from the late great Lou Thesz, who called Valentine “the most courageous guy I ever saw.”