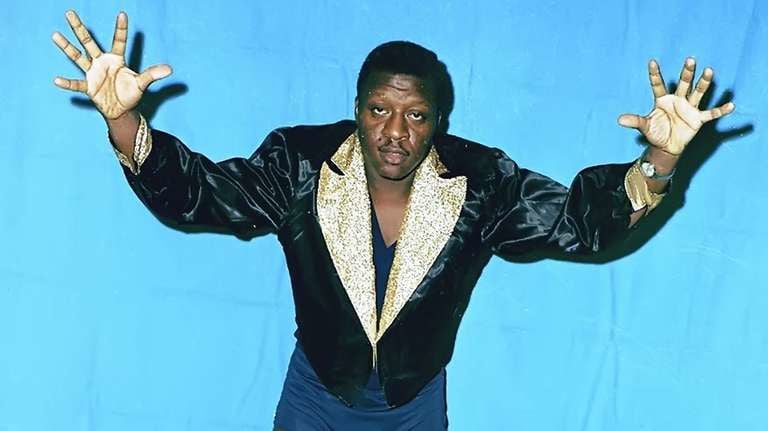 Burrhead Jones performed in front of thousands of fans and traveled around the world, but it was his rural Berkeley County roots that helped prepare him for a career in professional wrestling. Photo provided 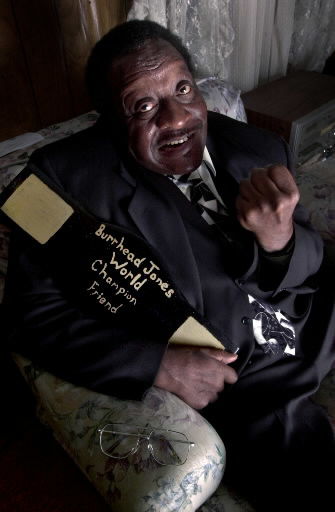 Burrhead Jones displays a championship belt that was presented to him. File/Staff 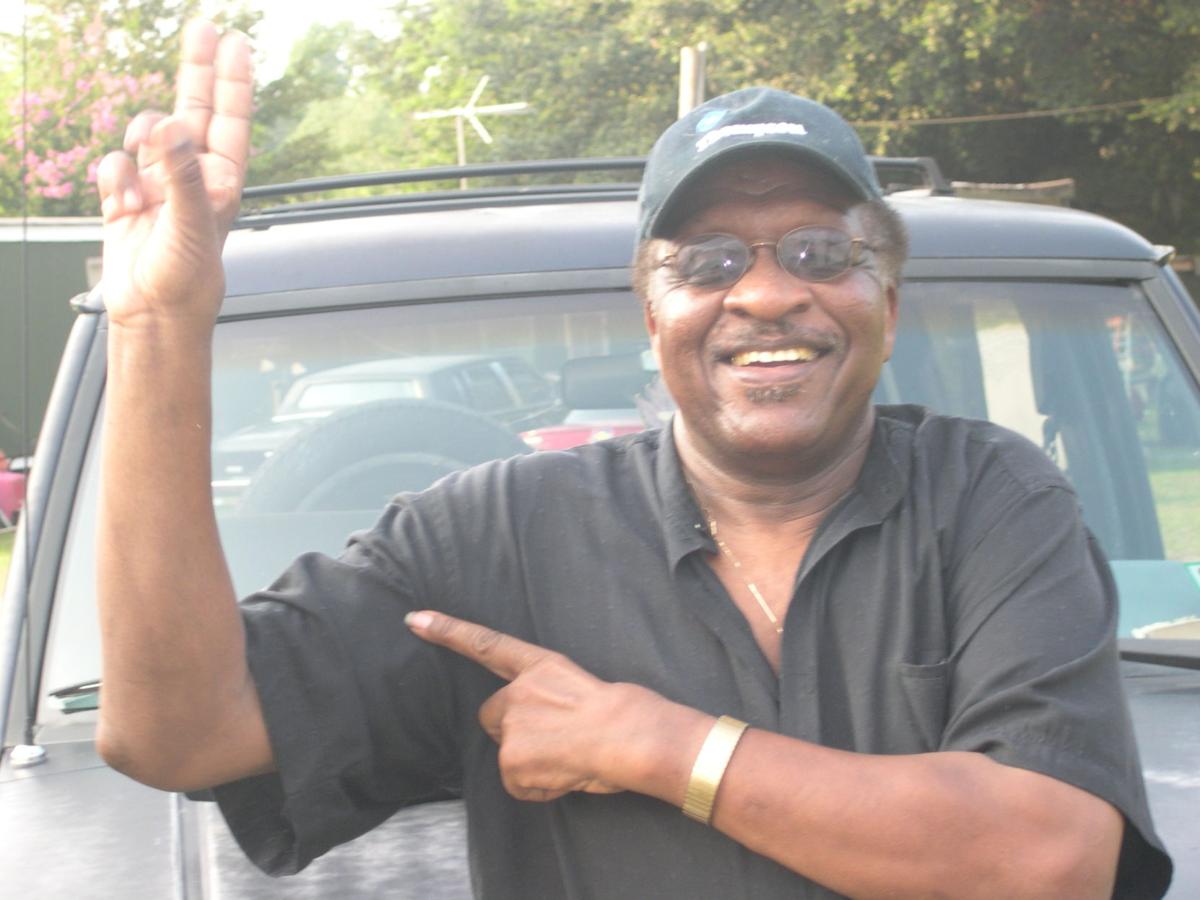 Burrhead Jones was a survivor and overcomer, a black man battling the odds in a business that mirrored a segregated society.

Call it sport, call it entertainment, call it whatever you like. But to me, professional wrestling has always been a family.

During my half century around the business, I’ve crossed paths with some of the greatest athletes and performers in the industry. From Lou Thesz to Ric Flair, from The Rock to Stone Cold Steve Austin, and a good number in between.

I’ve been fortunate enough to have enjoyed friendships with many of them that lasted throughout the years. At an early age I learned some of the ins and outs of a business that to most outsiders had always been a closed, almost secretive, society. Those strict rules, though, would be loosened as pro wrestling opened its doors to a mainstream audience and gradually morphed into sports entertainment.

One of my closest friends during many of those years was a man I affectionately referred to as “The Local Legend.” Anyone who ever met him would never forget him.

Burrhead Jones, who passed away in 2017 at the age of 80, never won a world title or got rich in the wrestling business.

What he did do was much more noble and inspiring. He worked his way out of Berkeley County cotton fields, survived the rampant racial discrimination of the time, and achieved his dream of becoming a professional wrestler.

“To make it as a black man back in the ‘70s, I had to be dedicated to the business and want it real bad,” Burrhead explained. “A newcomer to the business — black or white — had to pay his dues by spending some nights in the bus station or in his car just to have some money to live on. We always couldn’t afford a motel. I saw guys come in with a $5,000 car and leave in a $50,000 vehicle — a Greyhound bus out of town.”

Our friend Les Thatcher might have put it best when he described Burrhead.

“Burr was never world champ, he never headlined a pay-per-view, he never owned a BMW … hell, he may have never owned a car, but he was more the embodiment of our industry then Ric Flair, Bret Hart or John Cena.”

Why? The answer was simple.

“Because six or seven nights a week he ground it out in tank towns in front of a hundred fans to big crowds in major arenas making the current and future stars of wrestling look not good, but great, and he did it with love and passion because that was his job. He always met you in the back after making you look good with a handshake and a smile on his face. If anyone failed to say thank you to Burr, they should be tarred and feathered and run out of town.”

That was the Burrhead Jones we all knew and loved.

Burrhead Jones, whose birth name was Melvin Nelson, was a true original in a business that had more than its share of colorful, larger-than-life characters. A unique individual who never had a bad word about anyone (nor did anyone ever have one about him), Burrhead loved the wrestling business. To Burrhead, it was a family, and he was a beloved member.

Burrhead and I talked on a regular basis over the years. The Local Legend would regale me with stories from his wrestling days, putting a spin on the yarns like only he could. But we also talked about life, and the more he told me about his life, the more I grew to admire him.

With only a 10th-grade education, he spent his afternoons and evenings picking cotton for two cents a pound when he wasn’t busy plowing his own family’s fields with the help of his grandfather’s ox.

“My grandfather used to cut the plow handle off so I could reach it, so I figure I was only about 7 years old at the time,” he said.

What Burrhead might have lacked in schooling, he more than made up for with his knowledge of his fellow man and a sense of humor that made those around him comfortable.

And although there was racial prejudice and inequity, he always remembered his grandmother telling him to be patient.

“She told me to love my neighbor. If I was treated unfairly, she said, the Lord would take care of it ... in His time, that the Lord would make a way somehow.”

And somehow, the Lord always did.

The wrestling business ultimately accorded Burrhead the respect he had earned. In many ways, he would point out, the wrestling profession was like the large, close-knit family he had left behind years earlier.

“Wrestling is one big family that sticks together. I’ve gotten to meet many interesting people along the way. I never sensed any prejudice among the boys. Traveling was a great experience for me. I may have a 10th-grade education, but I’ve got a Ph.D. in common sense and knowledge. I can hold a conversation with anybody, no matter what level they’re on, no matter if it’s the President of the United States or a wino in the gutter. The experience of life and traveling around the world, meeting people from different walks of life, has given me that gift.”

Taking up residence in a mobile home that his late father owned less than a mile-and-a-half from his childhood home, Burrhead returned to the Lowcountry in 1990 after winding down his wrestling career, which came with no retirement benefits.

He worked for DAK America, formerly the DuPont fibers plant, where he retired in 2006 at the age of 68. Burrhead was proud of the work he put in at the plant and it afforded him some security in his later years.

Burrhead moved back to New York City shortly after retiring to spend more time with his children. Several lived in Manhattan; he told me he realized there would come a day when he might need their help. He also wanted to help them while he still could.

“I’ve also got a bunch of homies that I haven’t seen in quite a while,” he joked. “I guess I’m doing this in reverse. Most people retire and come back home. I retired and I’m going up there.”

But everything has a start and a finish, and Burrhead was obediently following the path.

“God has given me more than I ever expected. He’s never steered me wrong.”

While Burrhead wrestled mainly in the Southeastern region of the country, from the Carolinas and Virginia to Alabama, Tennessee and Mississippi, he really was known throughout the entire wrestling profession. Even in later years, long after the business had transformed from territorial promotions to large national companies, he would always be a welcomed visitor backstage.

Sometimes accompanying my friend, I marveled at how seamlessly he would interact with the legends of a past generation as well as the stars of a new one. It seemed as though everyone knew, or at least had heard of, the one and only Burrhead Jones.

Whether it be a Hulk Hogan (whom he had wrestled, and even once defeated, when Hogan was just starting out in the business as Terry Boulder) or The Rock (whom he remembered as his friend Rocky Johnson’s young son), there didn’t seem to be anyone that Burrhead couldn’t drum up a conversation with.

“He was just a sweetheart of a guy,” recalled Thatcher. “He was one of the kindest, sweetest human beings I have ever been honored to call my friend.”

Burrhead had enjoyed one of his most successful runs in the business teaming with a cousin he had met in New York several years before turning pro. He and fellow South Carolinian Carey “Buster” Lloyd (who would later become the inimitable Rufus R. “Freight Train” Jones) worked out at the same 42nd Street gym and first teamed in New York in the late ‘60s and again in the mid-‘70s for Charlotte-based Crockett Promotions.

One of Burrhead’s most memorable matches saw him take a seemingly vicious beating at the hands of Blackjack Mulligan during a televised show in 1976. It was a textbook angle that is still talked about in Mid-Atlantic wrestling circles today. “Burrhead really got instant recognition with that angle with Mulligan,” 16-time world heavyweight champion Ric Flair would recall. “He was a good worker, a great guy, and always in a super mood. He and Rufus were quite a pair.”

For his accomplishments, Burrhead would be inducted into the Lowcountry Legends Hall of Fame in 1998 and the South Carolina Pro Wrestling Hall of Fame in 2012. While I accepted the latter award on Burrhead’s behalf, he wanted to make sure that I let fans know that he enjoyed every minute of entertaining them over the years. Of course, I had already known that to be true, because he never failed to let me know.

Burrhead was a fun-loving friend, a hero of the past, a true legend who just didn’t portray a character. He was that character.

Like the old saying goes, “They just don’t make ‘em like that anymore,” and that certainly applied to Burrhead Jones.

Burrhead spent the last two years of his life blind and immobile. He had been born with glaucoma, a condition that causes damage to the eye’s optic nerve and gets worse over time. Not once, however, did I ever hear him complain about his situation. In his typical laid-back, down-home style, he would say that there were situations far worse than his.

His only complaint, he would half-jokingly declare, was that his hospital room wasn’t wired for cable and he couldn’t listen to his pro wrestling shows.

But he had enjoyed a wonderful life, a life that has afforded him many opportunities that he remained thankful for.

Through the good times, bad times and the enormous changes he’d seen, Burrhead remained steadfastly optimistic. When looking back over the many decades, he saw a life of joy and simple truths.

“A person can make anything out of life that he wants to,” he told me. “God has given me more than I ever expected. I thank my family for raising me the way they did. I will always respect them for that. I came through that time, and I’ve still got my sense of humor. I’ve been there and done that. I really did live the life of Riley.”

The end came suddenly. Burrhead had taken ill 24 hours earlier, and his condition rapidly deteriorated. Life support was tried temporarily, but it was in vain. Just like in his wrestling days, my good friend always knew when it was time to “go home.”

Two lines in his obituary described Melvin Nelson/Burrhead Jones to a tee.

“Melvin was a fun-loving man who was able to travel the world in pursuit of his life’s passion. He loved, he laughed, and he lived!”

I often think about Burrhead, especially during holidays, birthdays and other special occasions, when his calls would come in like clockwork, never failing to deliver his well wishes to my family.

But Burrhead was, in fact, a member of an extended family.

Everyone should be so blessed to have a friend like Burrhead Jones. But, like he said, there will never be a cotton-pickin’ nuther.