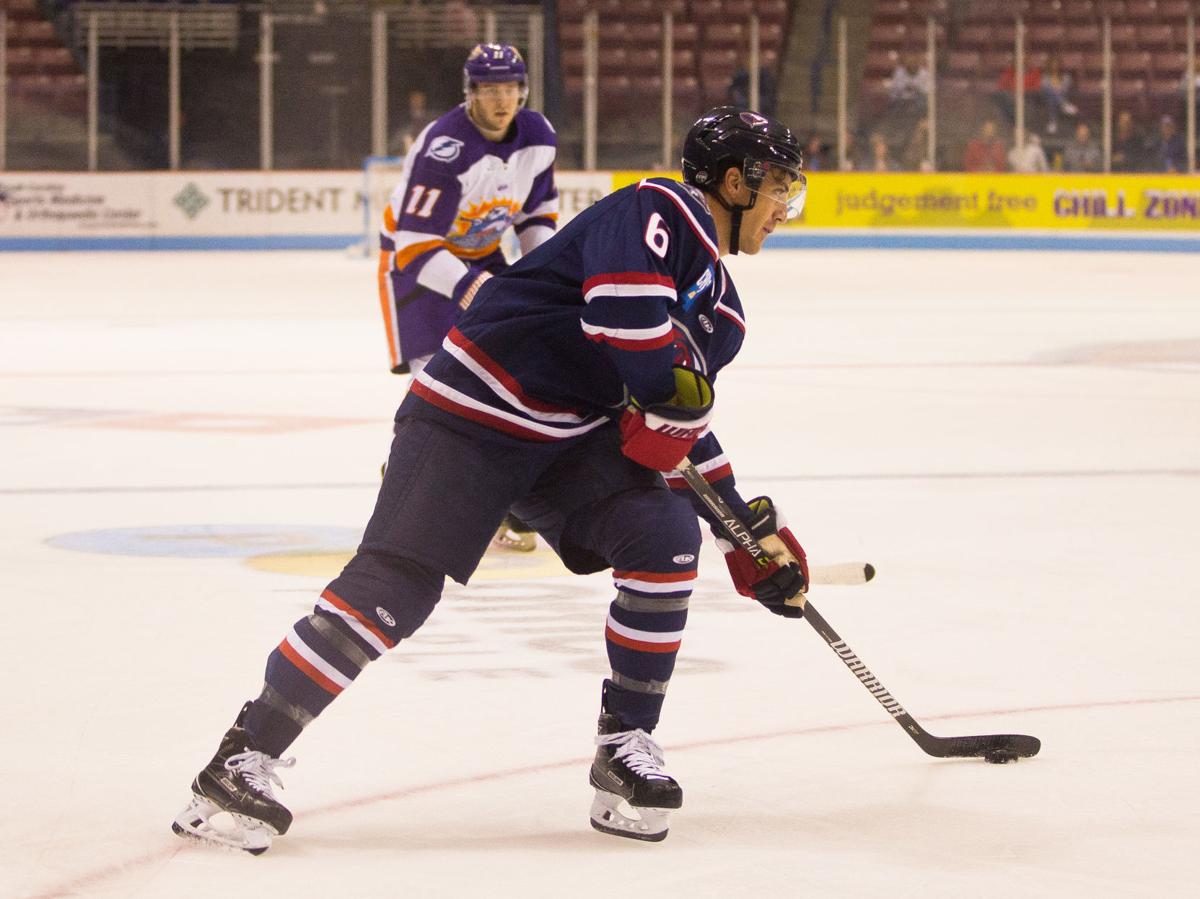 The Stingrays' Tom Parisi skates with the puck during a game against the Orlando Solar Bears on Tuesday, Dec. 10, 2019 at the North Charleston Coliseum. The Stingrays won, 2-1. File/Andrew Whitaker/Staff 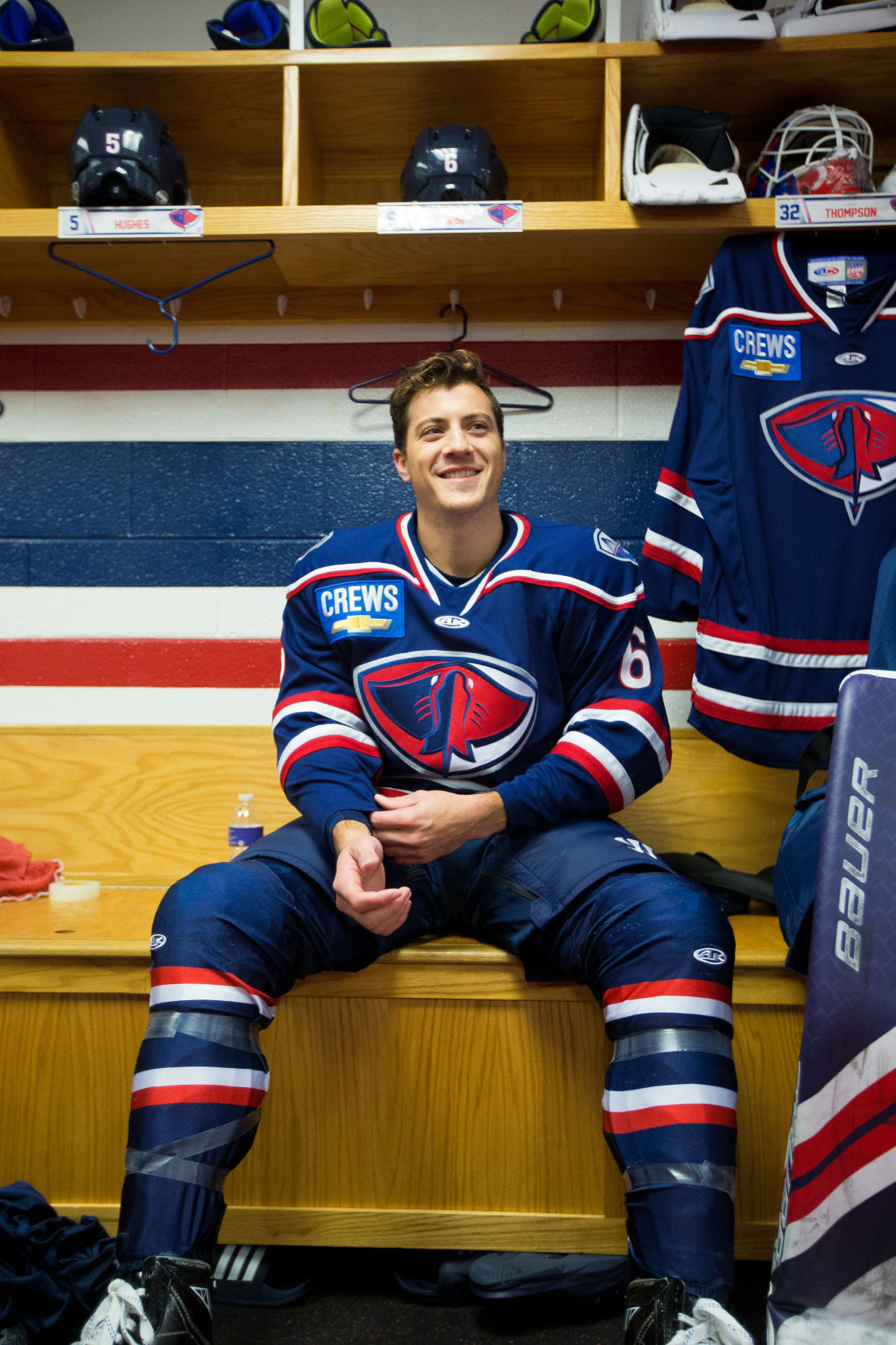 The Stingrays'  Tom Parisi sits in the locker room before a game against the Greenville Swamp Rabbits on Saturday, Dec. 14, 2019 at the North Charleston Coliseum. Andrew Whitaker/Staff

The Stingrays' Tom Parisi skates with the puck during a game against the Orlando Solar Bears on Tuesday, Dec. 10, 2019 at the North Charleston Coliseum. The Stingrays won, 2-1. File/Andrew Whitaker/Staff

The Stingrays'  Tom Parisi sits in the locker room before a game against the Greenville Swamp Rabbits on Saturday, Dec. 14, 2019 at the North Charleston Coliseum. Andrew Whitaker/Staff

Tom Parisi was living the dream.

Two years after graduating from Providence College, Parisi had an apartment in downtown Manhattan and a coveted finance job with a major player on Wall Street.

Parisi was making much more money at his investment job at Bank of America than he had in the two previous seasons playing professional hockey in the American Hockey League with the Montreal Canadians farm team.

There was something missing.

Sitting in his cubicle last summer, looking out at the New York City skyline, the South Carolina Stingrays defenseman began to think about returning to professional hockey.

He didn’t like the way he’d left the game. The two years he’d spent with the Canadiens' minor league teams – St. John’s IceCaps and Laval Rocket – had been miserable. The teams were barely competitive, finishing in the bottom five each season, and he'd come a whisper away from playing in the NHL.

When Parisi's entry-level contract expired with the Canadiens after the 2017-18 season, he knew he needed a change of scenery.

“It was a brutal two years,” Parisi said. “We had two guys on the team that had two years left on their entry-level deals that quit. They walked away and left about $250,000 on the table. That’s how toxic it was.”

Before the start of the 2018 season, the Commack, New York, native decided to step away from the game he’d been playing since he was a kid. Armed with a finance degree, he went into investment banking.

“If you’re a finance major, it’s probably the top job you can get coming out of school,” Parisi said. “It was a great situation, especially for your first job.”

South Carolina got two second period goals from Dan DeSalvo and Parker Milner made 21 saves to lead the Stingrays past Orlando, 2-1, Tuesday night before a crowd of 2,022 at the North Charleston Coliseum.

After a few months poring over balance sheets and stock options, the itch to play professional hockey began to enter his subconscious. In his second season in the AHL, he’d come very close to realizing his dream of getting called up to the NHL.

“I was playing top-two minutes every night and knew I was close,” said Parisi, who scored four goals and 13 assists with Laval during his final season in the AHL. “My partner got called up, but I didn’t for whatever reason.”

At 25, he didn’t want to play the ‘what if’ game, looking back on a professional hockey that might have been.

“I didn’t want to be in my 30s and wonder what might have happened had I come back and tried to play again,” Parisi said. “I didn’t want to leave the game with any regrets. The grind of those last two years had gotten to me and I think I just needed to refocus and recharge my batteries. I knew I had something left in the tank.”

Parisi reached out to his old college roommate Steve McParland, who had played with the Stingrays during their run to the Kelly Cup finals in 2017, to see what his options might be. McParland had bounced between the AHL and ECHL, but was headed to Europe for the 2019-20 season.

“Steve said I should check out the Stingrays and I'd known a couple of guys that had played there and had heard great things about Charleston and the organization,” Parisi said.

South Carolina head coach Steve Bergin was on a treadmill working out this July when he got a text from an unknown European cell number.

Bergin did his research on Parisi, knowing that he’d played a major role his junior season at Providence leading the Friars to the NCAA national title.

After a couple of phone calls, Parisi signed an ECHL contract.

In just 18 games, Parisi has already established himself as an elite two-way defenseman in the ECHL with four goals and nine assists. He is among the league's top-scoring defensemen.

“He’s been awesome,” Bergin said. “He doesn’t have an ego. A guy with his resume might not want to come down to the ECHL and play, but he hasn't been like that at all. He wants to be here. He wants to work and earn everything he gets. He has a ton of talent and a ton of skill, but he works extremely hard. He’s a great teammate and he wants to get better.”

His time in the Lowcountry has brought back the love of the game for Parisi.

“The two months I’ve spent here were so much better than the two years I was with Montreal,” Parisi said. “It was a struggle to go to the rink those two years and now I can’t wait to get here every day. It has been a tremendous experience. The coaching staff put a lot of faith in me. I hadn’t played in a year, so they didn’t know what to expect. I’m just thankful they have given me this opportunity.”

Parisi’s performance hasn’t gone unnoticed at the next level either. He’s already been called up to the AHL once, playing two games for the Belleville Senators last month.

“I thought I played pretty well and I got some good feedback,” Parisi said. “I didn’t think it would happen that quickly. Now, it’s a matter of getting another opportunity. But if it doesn’t happen, I won’t worry about it because I’m having such a great time down here playing on a great team with a locker room filled with good guys.”

Promotion: Teddy Bear Toss. Fans are encouraged to bring stuffed animals to the game to throw on the ice when the Stingrays score their first goal. The stuffed animals will be donated to the Salvation Army.

The South Carolina Stingrays are off to the best start in franchise history as the team heads into the ECHL All-Star break. But do they make the grade?