"I don't put a whole lot of faith in what I see there," Thompson said Monday. "I'm more worried about where they are than who they are."

Still, some coaches feel the need to retain an air of mystery about their depth charts, which typically list the starter and backup at each position on offense, defense and special teams.

New Georgia Tech coach Geoff Collins, for example, has released a depth chart for the Yellow Jackets' season opener against Clemson that includes just an alphabetical list of players at each position — no starters or backups are designated.

"Probably some gamesmanship going on there," said Thompson, whose Bulldogs play at Georgia Tech on Sept. 14.

Thompson played it straight as The Citadel released its first depth chart of the season on Monday in preparation for Saturday's season opener against Towson, ranked No. 12 in the preseason FCS coaches poll. 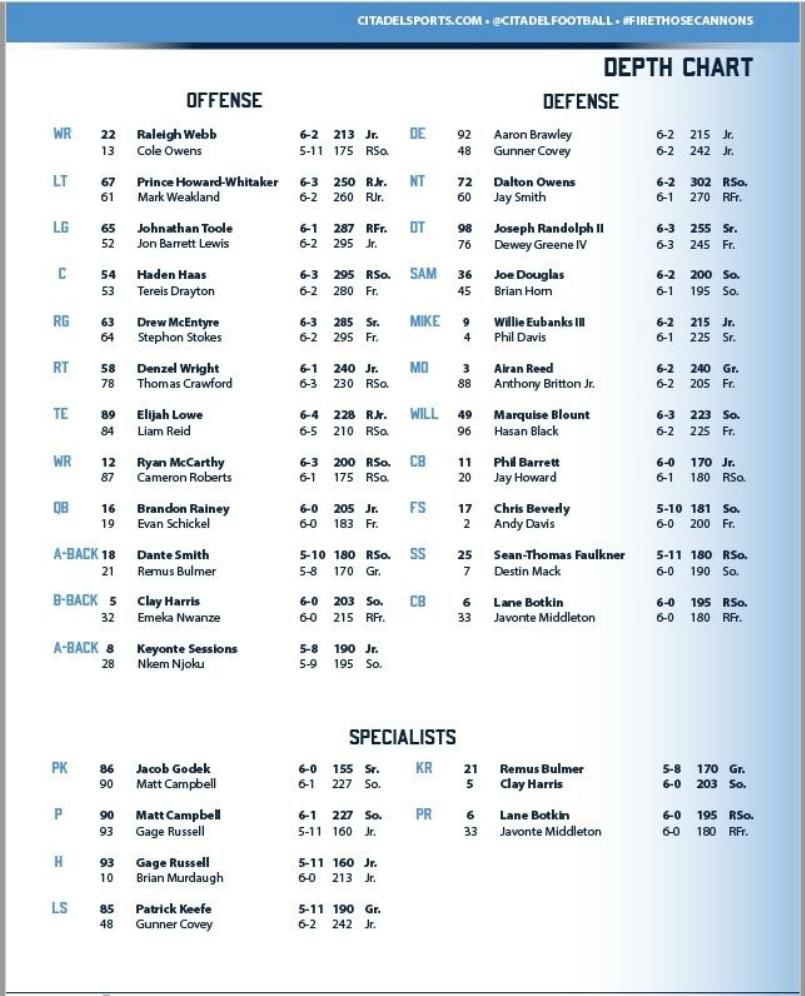 But the Bulldogs' lineup for Towson does include some surprises and some new names, which Thompson discussed during his first news conference of the 2019 season:

• Redshirt freshman Jonathan Toole is listed as the starter at left guard on offense, ahead of returning starter Jon Barrett Lewis. Toole is a 6-1, 287-pounder from Spring, Texas, who played in one game last year.

"Jonathan has competed hard for that spot and really came on strong last year," Thompson said. "But he didn't have as strong of a spring as we hoped and kind of got buried on the depth chart. But he really had a nice fall camp, so that will be a battle to the end."

It will probably be a game-time decision between Toole and Lewis, a 6-2, 295-pound junior who started all 11 games at left tackle last season.

Citadel preview: 'I backed my team up, and I like where we're at,' coach says

• The backup quarterback behind starter Brandon Rainey will be Brian Murdaugh, a walk-on junior from Walterboro who played at Colleton Prep in high school. Murdaugh redshirted in 2016, did not play in 2017 and played in one game last year. Freshman QB Evan Schickel has been slowed by injury, and redshirt freshman Javonte Middleton has moved to cornerback, where he's listed as a backup to starter Lane Botkin.

• As they did last year, the Bulldogs are listing a starter and backup at tight end, which usually amounts to a third tackle in The Citadel's triple-option offense. Redshirt junior Elijah Lowe (6-4, 228) and redshirt sophomore Liam Reid (6-5, 210) are the tight ends. Lowe, from the Bahamas, was the MVP of the offensive line at Easley High School; Reid played at state power Dutch Fork.

• Grad-student transfer Airan Reed (6-2, 240) from Southern Illinois is starting at one of the inside linebacker spots in new coordinator Tony Grantham's 3-4 alignment. Transfer Remus Bulmer from Sam Houston State is a backup at slotback and slated to start at kick returner alongside fullback Clay Harris.

'It gave us closure': Citadel QB ready for new season after friend's death

• Junior quarterback Rainey and junior cornerback Phil Barrett have been named team captains for The Citadel.