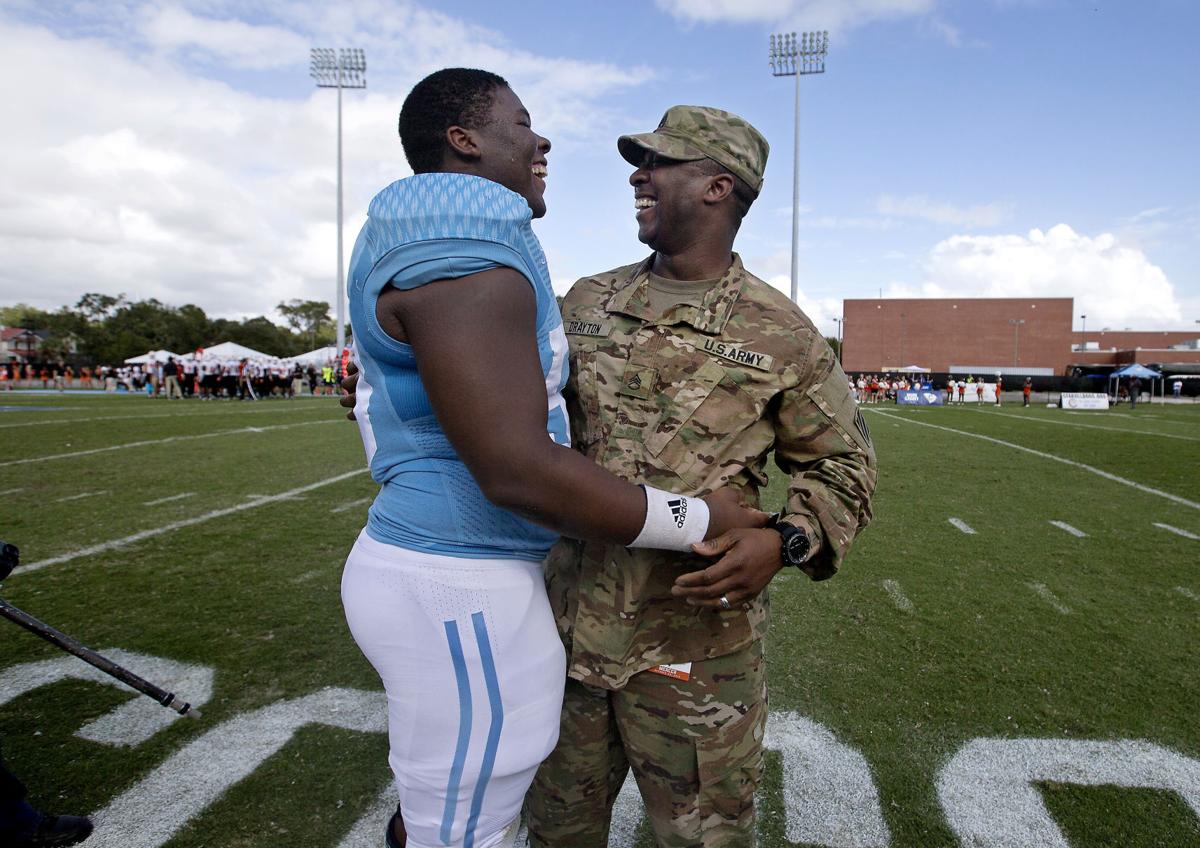 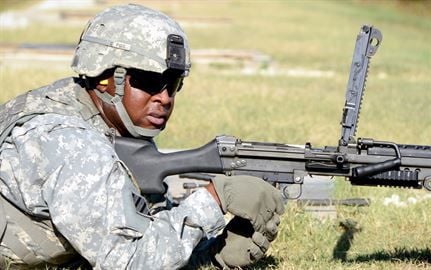 It started off as a secret among three people, and by game day about 10 staffers at The Citadel knew what was going on.

But as Citadel freshman football player Tereis Drayton stood awkwardly at the 25-yard line at Johnson Hagood Stadium last Saturday afternoon, more than 11,000 people could see what was coming.

Army Staff Sgt. Demond Drayton, in full uniform, marched across the grass to approach his son from behind. At the last moment, Tereis turned to see his father, a broad smile crossing his face as he realized what was happening — a surprise father-and-son reunion in front of a packed Citadel homecoming crowd.

"USA! USA!" Citadel fans chanted as Drayton and his father hugged, reunited after Sgt. Drayton returned early from an eight-month deployment in Europe.

On the sideline, offensive line coach Ron Boyd and his charges looked on.

"Boyd said all those guys on the offensive line started to tear up," head coach Brent Thompson said. "It was really neat to see everyone's reaction."

The stealth operation took a good week of planning by Citadel sports information director John Brush and others. The impetus came from Autumn Drayton, Tereis' stepmom, who wanted to arrange a homecoming surprise.

Sgt. Drayton, who is stationed at Fort Stewart in Savannah, works in supply and logistics. He is from Hollywood at the southern end of Charleston County, and joined the Army soon after Tereis was born. Sgt. Drayton fought in Operation Iraqi Freedom I and II from 2003 to 2005, and was often deployed (sometimes to Afghanistan and Pakistan) while Tereis was growing up.

"He missed a lot of the kids' stuff while they were growing up," Autumn Drayton said. "He missed Tereis' high school graduation last June. He tried to come back, but being deployed, you don't always have that option."

This time, Sgt. Drayton had been deployed to Europe since last April, and was not scheduled to return home until late January.

But when Mrs. Drayton learned her husband would be home early, she had an idea.

"She called and said she wanted to do something special, and wanted to know if we could help," said Brush.

Military homecoming surprises are often held at sporting events, but they don't usually involve a player participating in the game. That meant approval from the head coach.

"The first person I went to was Coach Thompson, to make sure he was okay with it," Brush said. "And he was fine with it."

Said Thompson, "I was informed, but I didn't tell anybody else. I wanted to see their reactions."

The next hurdle was to find a way to get Tereis on the field by himself during the game without arousing his suspicion.

"We had to come up with a way to fit it into the game, and to get Tereis away from the team without making it too obvious," Brush said.

The solution: An announcement after the first quarter recognizing the Brigadier Foundation and its donations to fund scholarships for Citadel athletes.

"I bought it for real," he said with a laugh. "They told me it was for the Brigadier Foundation. But when I got out there, there was no check and I'm like, 'What's going on?'"

Russell Frierson, the executive director of the Brigadier Foundation, was tasked with accompanying Tereis on the field, and with keeping him facing in the right direction.

"It was awkward, just staring at the Corps of Cadets and the fans," Tereis said. "He told me to wave."

Finally, as the murmurs from the crowd grew louder with each step, Sgt. Drayton appeared behind his son.

"Everybody has been telling me how big my smile was," Tereis said. "And they told me how they were crying when it happened. I was just laughing, because it was so crazy."

The moment also meant a lot to his father, Autumn Drayton said.

"These soldiers sacrifice so much, being away from their families, and the kids do, too," she said. "When you miss those life moments like that, it's not easy."

The only thing missing: Sgt. Drayton did not get to see his son play. Tereis is the backup center behind starting sophomore Haden Haas, but is redshirting this season and has yet to play in a game. Next spring, Citadel coaches plan to try him at different positions on the line, and he could be starting by next fall.

"When Tereis came to our camp, he moved like a defensive lineman and had the explosion of a defensive lineman," Thompson said. "He's 285, 290 pounds, but moves like he's 270 and is very strong for a young player. He's going to be a very good lineman for us."

THE CITADEL AT ETSU

Charlie Taaffe, who won more football games at The Citadel than any other coach, has died. "He made us better people," one of his players said.

With its Southern Conference title hopes on the line, The Citadel came up with two of its biggest plays of the season Saturday to keep that dr…

Lake City put Ra'Shaud Graham through The Citadel. Now, the Bulldogs' football team chaplain and head of the school's Fellowship of Christian Athletes is looking to give back.

Norris Burkes: The reasons we volunteer to go to war

How could I tell my wife that I wanted to go to Iraq to fathom the sorrow that had become my job to understand, not just regret? More than that, I wanted to tell families that I had seen how their loved ones handled the act of dying.

Citadel basketball fans got their first look at the Bulldogs' newcomers on Saturday in the team's season opener against UNC Asheville.