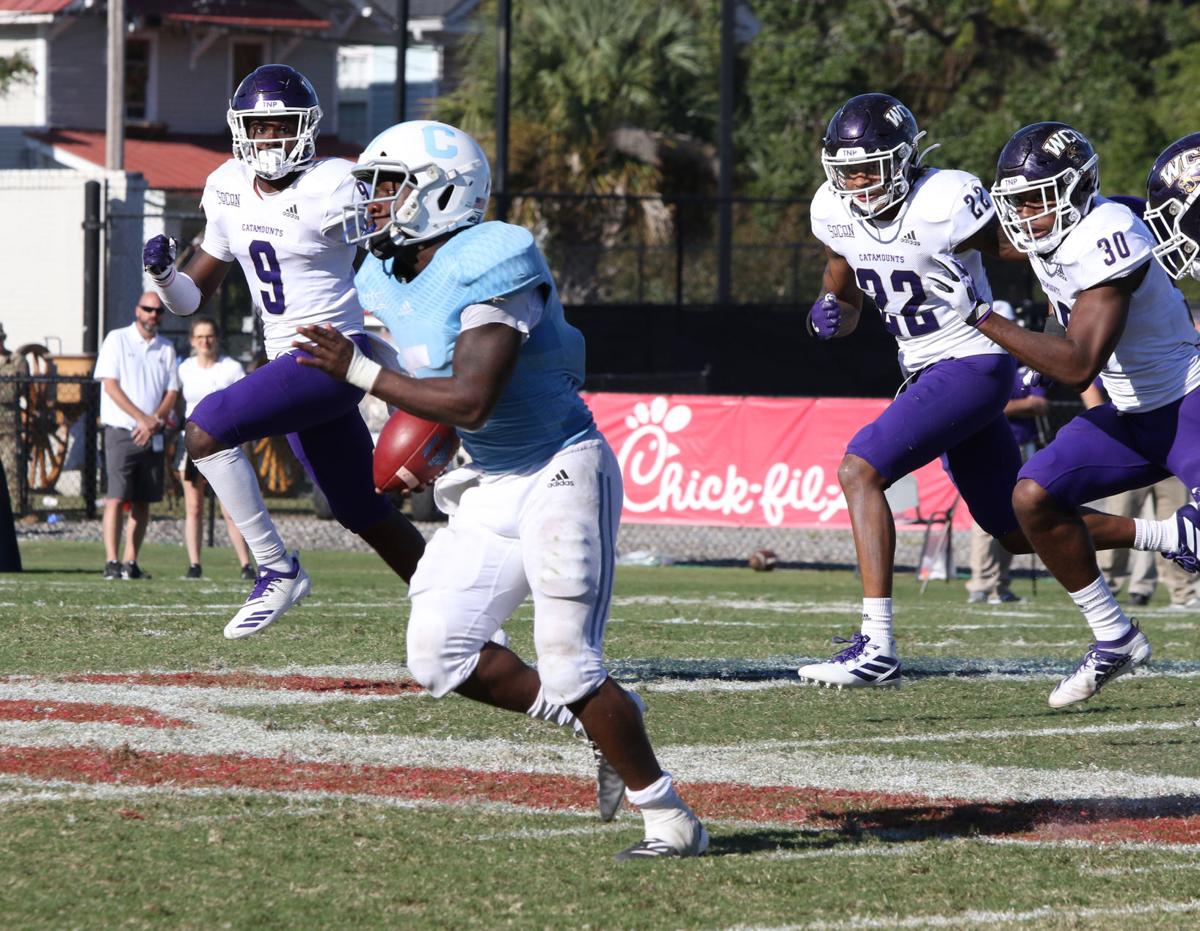 Citadel running back Clay Harris rushed for 154 yards in the Bulldogs' 35-17 win over Western Carolina on Saturday at Johnson Hagood Stadium. 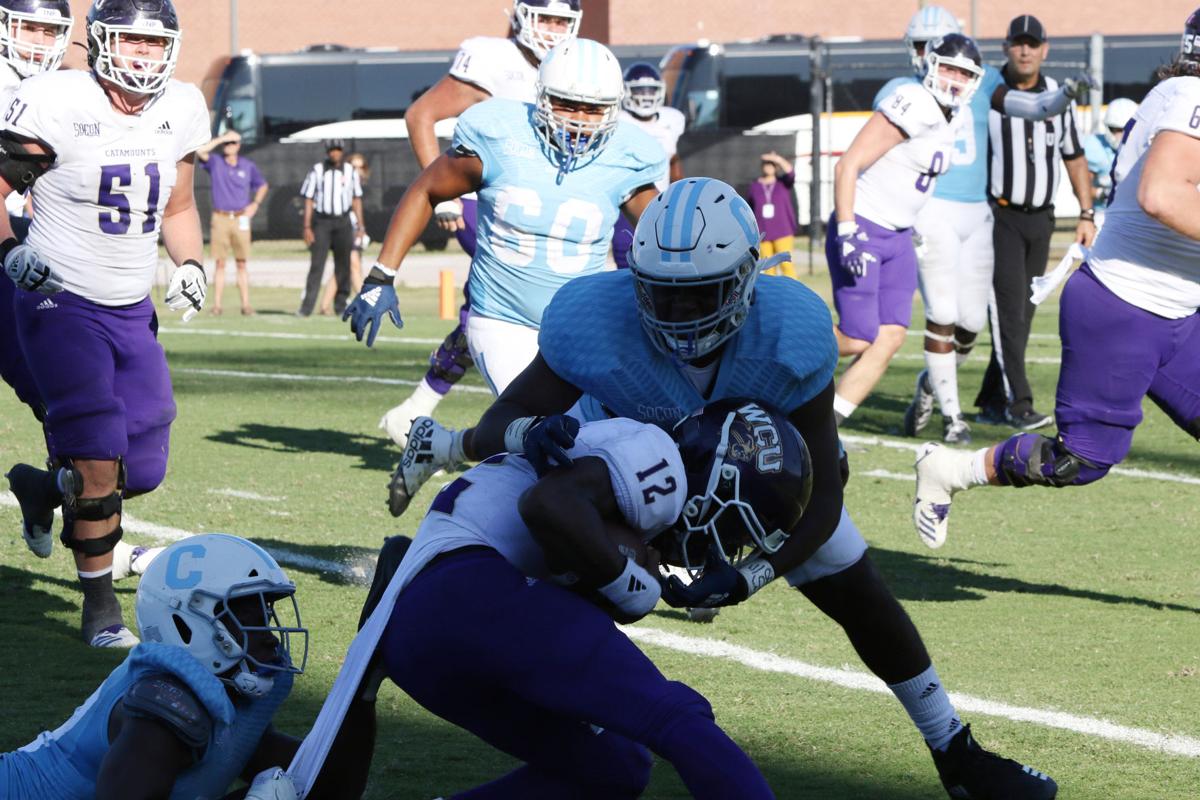 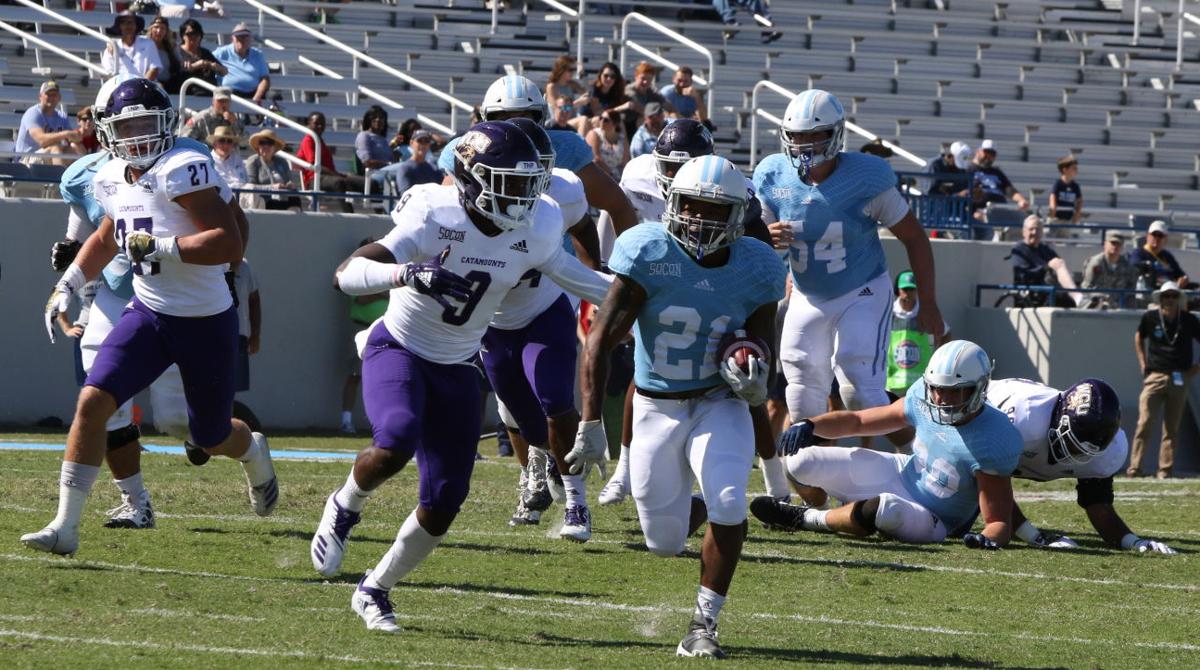 The Citadel's Remus Bulmer carries against Western Carolina on Saturday.

Citadel running back Clay Harris rushed for 154 yards in the Bulldogs' 35-17 win over Western Carolina on Saturday at Johnson Hagood Stadium.

The Citadel's Remus Bulmer carries against Western Carolina on Saturday.

That strange noise emanating from The Citadel's locker room Saturday afternoon — whoops and hollers, shouts of laughter, the sounds of victory — had been absent for only two weeks.

But it seemed longer. Much longer.

"It's been a tough two weeks," said Bulldogs coach Brent Thompson, reflecting on the aftermath of a four-overtime defeat at Samford and the loss of the coveted Silver Shako to VMI. "But we knew we were the type of team that could respond with our backs to the wall a little bit."

Thompson had called Saturday's game against Western Carolina a "must win," and the Bulldogs responded, storming to a 25-point lead and holding on for a 35-17 victory before 8,023 fans at Johnson Hagood Stadium.

Quarterback Brandon Rainey, who injured his knee a month ago in the upset win at Georgia Tech, is looking more like his old self. He ran for two touchdowns and passed for three more, two to Remus Bulmer, as the Bulldogs snapped a two-game skid to improve to 3-4 overall and 1-2 in the Southern Conference.

Fullback Clay Harris ran for a career-best 154 yards, and The Citadel's defense sacked WCU quarterback Tyrie Adams four times and forced three turnovers, including two interceptions. The Catamounts are 1-5 overall and 0-3 in the SoCon, tied for last place with ETSU.

It all added up to a sense of relief, and a dash of renewed confidence, heading into next week's game at No. 11 Furman (4-2, 3-0), which had an open date Saturday.

"This was a huge win for us," said Citadel guard Drew McEntyre, who helped pave the way for a season-best 339 rushing yards. "We've been close the last two weeks, and it was kind of a letdown. But it was good to see us come out and do what we know we can do."

"This was the first week (since Georgia Tech) that I've really seen Brandon at full go and ready to get back in the game," Thompson said. "All week long, he was fired up."

Bulmer, the graduate transfer from Sam Houston State, had his best game as a Bulldog, running five times for 54 yards and returning a kickoff 43 yards in addition to his TD catches.

"It means a lot, just to show these guys that they can trust me as a fifth-year player adjusting to this offense, because I've been in the spread my whole life," said Bulmer. "I wanted to show them I could get down with it and do what I'm supposed to do."

The Bulldogs sprinted to a 28-3 lead halfway through the second quarter, going for the jugular when Thompson ordered up an onside kick with his team ahead 21-3. Kicker Jacob Godek recovered his own kick, and on the next play Rainey found Webb over the top for the receiver's seventh TD of the season.

"We wanted to try to gain an extra possession there, and we checked to see if we had it," Thompson said of the onside kick. "When you've got the momentum there, you are feeling it, and we thought that was a good chance to get Raleigh open. I thought the ball was a little overthrown, but Raleigh did a good job and tracked it down."

But the Bulldogs could not deliver the knockout blow until the fourth quarter. WCU cut the lead to 28-17 with 5:05 left in the third quarter as Adams ran for a TD and passed for another. Adams, the preseason SoCon offensive player of the year, ran for 87 yards, including a 40-yard scramble, and hit 22 of 30 passes for 210 yards.

But on consecutive possessions, the Bulldogs' Jay Howard recovered a fumble and Destin Mack picked off a pass, The Citadel's third interception of the season. Rainey turned the interception into a 17-yard TD pass to Bulmer for a 35-17 lead with 9:44 left.

The Citadel sacked Adams four times on WCU's final possession before Howard picked off a Hail Mary throw in the end zone to seal the win.

"We needed to catch a little bit of fire, and hopefully we've got that now," Thompson said. "I told the players, it was a long week, a long two weeks really, but they grinded through it with us."

• Saturday's game was fullback Clay Harris' second career 100-yard game, both against WCU. He had 126 yards in his first career start at WCU last season ... Linebacker Marquise Blount had 1.5 sacks, and Phil Barrett and Joseph Randolph II had one each, with linebacker Gunner Covey credited with half a sack.

• Linebacker Willie Eubanks III and Blount each had nine tackles, and Blount and Randolph each had two tackles for loss ... Punter Matt Campbell missed his third straight game with a leg injury ... VMI, which beat The Citadel for the first time since 2002 last week, backed that up with a 48-41 overtime win over Samford on Saturday to improve to 4-3 overall and 3-1 in the SoCon, good for third place.