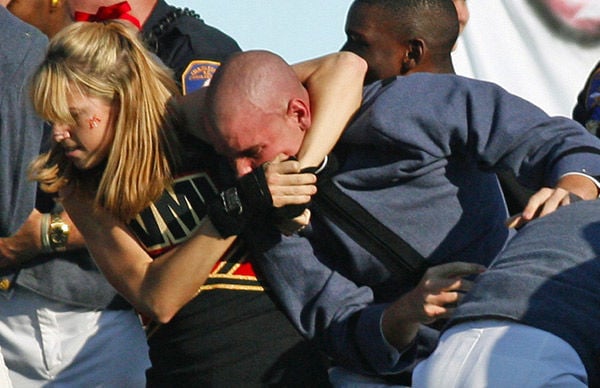 A VMI cheerleader scuffles with a Citadel cadet during the Keydets’ visit to Johnson Hagood Stadium in Nov. 2006. The Bulldogs won the game, 48-21. Staff/File 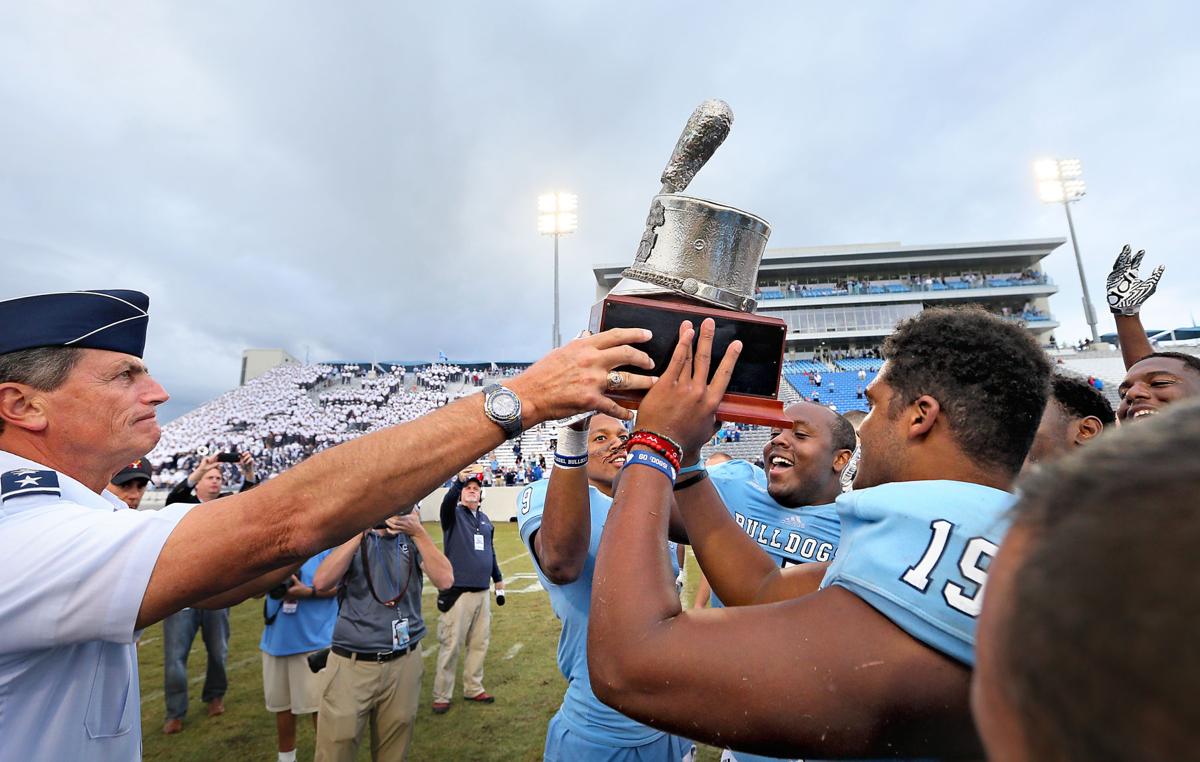 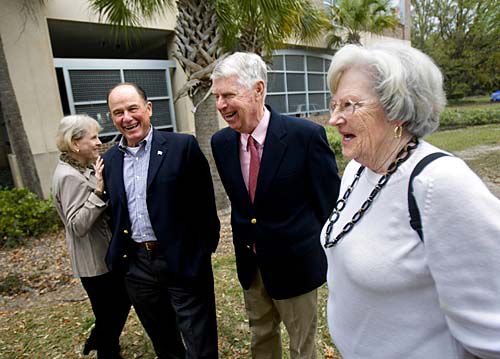 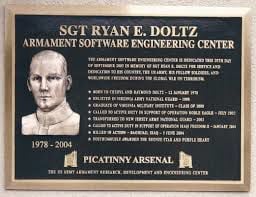 Word from that other military-school outpost in Lexington, Va., is that some 500 VMI cadets will make the long journey to The Citadel on Saturday to witness the 75th playing of the Military Classic of the South.

The presence of those 500 VMI cadets at Johnson Hagood Stadium may or may not increase the likelihood of another chapter in the lore of the military-school rivalry, which dates back to 1920.

Here are some of those chapters — and the rest of the stories.

In 2000, VMI cadets pulled one of the great pranks in the history of the rivalry, making their way to The Citadel's campus to steal a Jeep. They loaded it on a U-Haul trailer and drove it back to VMI, where they wheeled it gleefully around the stadium during a 41-21 win over the Bulldogs.

The rest of the story: The ringleader of the Jeep caper was Ryan Doltz, VMI class of 2000. The native of Mine Hill, N.J., had also led another stealth mission at VMI, to steal a Naval Academy boat during a VMI-Navy football game.

Doltz, who went on to join the National Guard, was just 26 when he was killed by a roadside bomb near Baghdad, Iraq, on June 5, 2004.

He was also known as "Babyface" after he starred with three other VMI cadets in a 1998 shaving commercial.

"His blue eyes sparkled with mischief whenever he could get his brother in trouble," his mother said in a 2004 interview.

The Jeep caper was actually masterminded by another VMI cadet, Mike Judge, who spent four years planning the prank. But on the night in question, he was on reserve duty with the Marine Corps and could not participate.

The rest of the story: Judge went on to write a memoir of his time at VMI, called "The Jeep."

"My freshman year, (Citadel cadets) came and dumped paint on one of our statues, Stonewall Jackson," Judge said in a 2009 interview. "So from that point on, I started scheming about how we can get them back. The planning started when I was a freshman and we pulled it off when I was a senior."

An unforgettable bit of Citadel-VMI lore happened in 2006 at Johnson Hagood Stadium. After a Citadel cadet tried to steal a VMI flag, one of VMI's female cheerleaders put a Citadel knob in a headlock. The video went viral, with more than 100,000 views in the immediate aftermath.

The rest of the story: The cheerleader's name was Carrie McAtee, and she went on to serve in the Marines, earn a master's degree in project management from The Citadel and founded an activewear company in Michigan, according to her Linked In profile.

Citadel's Webb design: A workout warrior who catches nothing but touchdowns

The Citadel's Raleigh Webb is movie-star handsome, with a physique somewhere between Olympic swimmer and Mr. Universe.

Another Jeep caper touched off perhaps the most famous incident in Citadel-VMI history, the story of Suzie Q the elephant.

Suzie Q was a mascot of Channel 2 in Mount Pleasant in the 1950s, living on station grounds with a menagerie that included "an alligator, kangaroo, donkey, exotic birds and other animals," according to a story by the television station's Brad Franko.

The elephant caught the attention of two Citadel cadets in 1958, with VMI coming to town riding a 17-game winning streak. The previous year, VMI cadets had pulled another Jeep caper, stealing Gen. Mark Clark's Jeep and painting it red and yellow.

The pair of Citadel seniors loaded Suzie Q into a trailer, hitched the trailer to a 1950 Ford and hauled the elephant across the old, two-lane Cooper River Bridge into Charleston. Somehow they made it, and paraded Suzie Q to Johnson Hagood Stadium for the game.

The rest of the story: The Citadel won the game, and cadets Bobby Schwarze and Jim Jeffrey escaped school punishment. Schwarze was drafted by the NFL's Pittsburgh Steelers, but joined the Marines and was inducted into The Citadel's Athletic Hall of Fame in 1990.

Jeffrey played tennis at The Citadel, where he was co-captain and team MVP in 1959, and went on to work for Allstate Insurance.

The Citadel's Joshua Roides is a third-team kicker who stands 5-foot-7 and weighs 166 pounds, sports a grin with a missing front tooth and likes to wear black-rimmed nerd glasses.

The fate of Suzie Q seems unclear, with various rumors locating her in Tennessee, Cincinnati, Kentucky, Jacksonville or Baltimore. But she was honored in 2009 with a historic marker near Channel 2 on Magrath Darby Boulevard.

On the field, The Citadel's chances of winning a 13th straight game over VMI will rely on how well linebacker Willie Eubanks III (the Southern Conference defensive player of the month) and his defensive mates can corral Keydets quarterback Reese Udinski and his posse of receivers.

Udinski, a junior, is the top passer in the SoCon, hitting 59.9 percent of his throws for 265 yards per game, with 10 touchdowns against no interceptions. VMI has five of the top nine receivers in the league, led by senior Rohan Martin with 25 catches, and is averaging 33.6 points per game, second in the SoCon.

Jeff's Take: For Citadel, facemask grab at Georgia Tech might be a turning point

VMI AT THE CITADEL