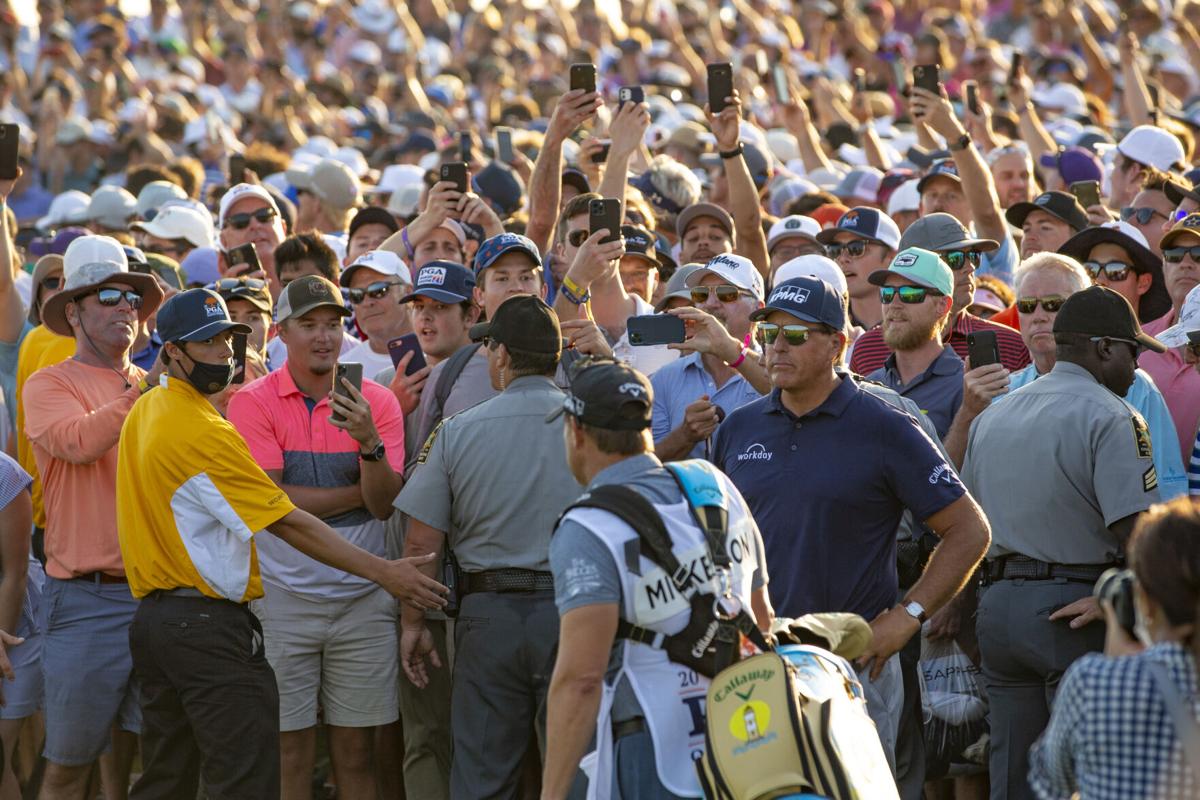 Phil Mickelson is surrounded by fans as he walks along the 18th fairway during the final round of the PGA Championship on May 23 at the Ocean Course on Kiawah Island. Andrew J. Whitaker/Staff 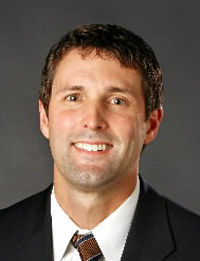 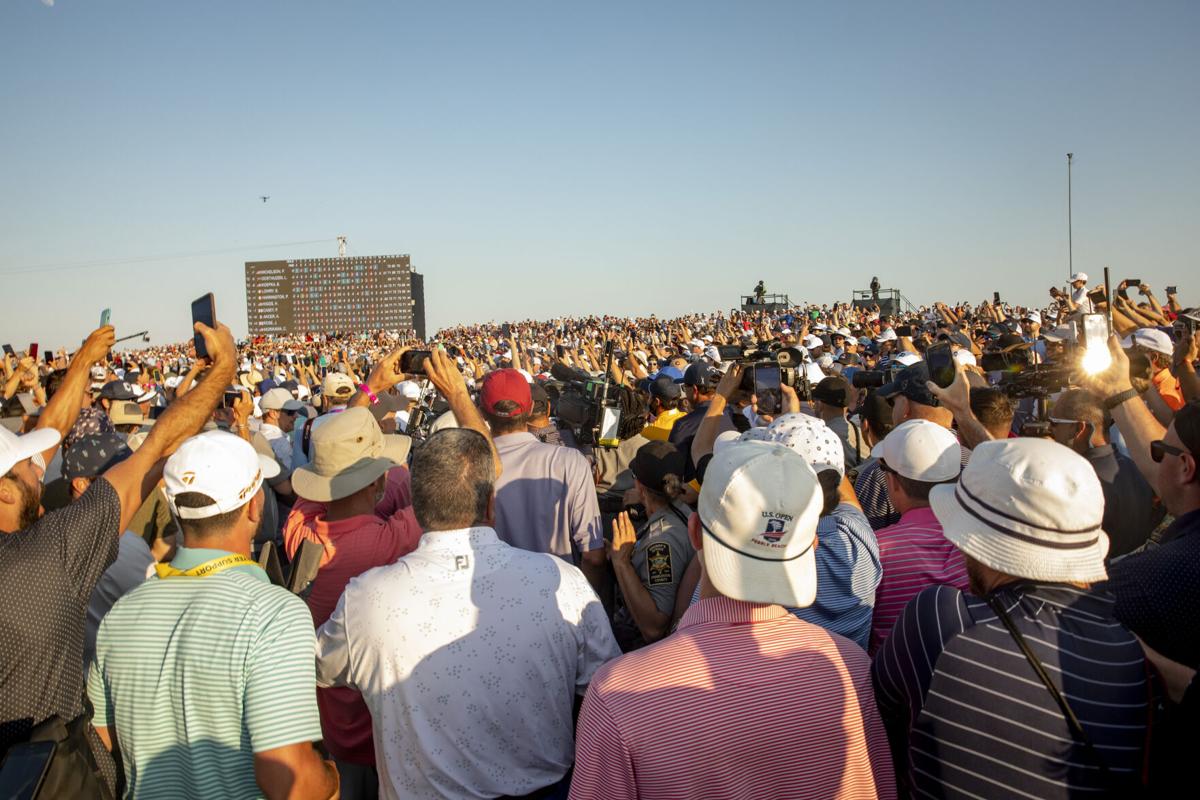 Fans swarm around Phil Mickelson on the eightieth hole during the final round of the PGA Championship on Sunday, May 23, 2021 at the Ocean Course on Kiawah Island. Andrew J. Whitaker/Staff

Phil Mickelson is surrounded by fans as he walks along the 18th fairway during the final round of the PGA Championship on May 23 at the Ocean Course on Kiawah Island. Andrew J. Whitaker/Staff

Fans swarm around Phil Mickelson on the eightieth hole during the final round of the PGA Championship on Sunday, May 23, 2021 at the Ocean Course on Kiawah Island. Andrew J. Whitaker/Staff

If there is one lasting image from last week’s PGA Championship on Kiawah Island, it was the swarm of fans around Phil Mickelson as he approached the 18th green to become the oldest winner of a major championship in golf history. Unlike many pundits who saw the crowd and worried about safety, I saw it as the end of COVID-19’s stranglehold on sports.

The tide started to turn in March. After Texas governor Greg Abbott announced the state would fully reopen business, the Texas Rangers decided to play games with no limits on fans. More than 30,000 attended the home opener. The dreaded surge in cases so many people predicted has not materialized. Despite being accused of “neanderthal thinking,” Abbott recently announced Texas experienced the fewest COVID cases in more than 13 months and its lowest hospitalizations since April 2020.

NFL commissioner Roger Goodell has claimed for months that teams would have full stadiums this fall. Sure enough, Carolina Panthers president Tom Glick announced that Bank of America Stadium will open at full capacity for all events, including NFL and college games. There will be no mask requirement, and event personnel will not check fans' temperatures before admission. Even the New York Giants and Jets have announced they will play with full fan attendance despite that region having among the strictest lockdowns during the pandemic.

What's next for 'incredible' Ocean Course? Another PGA, Ryder Cup could be on horizon.

Sure, those are outdoor stadiums, where the risk of virus spread is thought to be lower than one percent. But what about dome stadiums and indoor arenas? Well, for the first round of the NBA playoffs, the Utah Jazz played the Memphis Grizzlies in front of 13,000 fans. Nearly 10,000 fans will watch in FedEx Forum when the series shifts to Memphis.

People urging caution about full stadiums point to a recent study, which has not been peer reviewed, submitted to The Lancet Medical Journal. In that study, researchers found that in the counties close to the NFL teams who played games last season in front of more than 20,000 fans, there were "episodic spikes in the count of COVID-19 cases" in the 21 days after the games.

The authors of the study conclude that "particularly for large crowds of over 20,000 ... return to sporting and other mass gathering events should be handled with extreme caution and may indeed be premature."

Maybe, but there are a few counterpoints worth considering. One, positive cases were not traced specifically to the games. The stadiums weren't the only places fans gathered. The researchers couldn’t prove the cases didn't come from other places in those cities, like packed bars, for example. In fact, health officials in Kansas City and Tampa, two of the cities with large numbers of fans at games last season, told the New York Times they don't believe fans in the stands spread the virus.

Second, a similar study earlier this year showed no surge in cases from football. Researchers found no increase in COVID cases per 100,000 residents in the counties where NFL and NCAA games were held with in-person attendance compared to similar counties without football games.

Finally, and most importantly, the study submitted to The Lancet examined cases from NFL games played at a time when almost no one in this country had been vaccinated. As of Monday, almost 40 percent of the American population is fully vaccinated, and about half of the population has received its first dose. Those numbers, plus the exponential drop in cases in recent weeks, suggests that if there are cases of COVID-19 arising from sporting events this summer and fall, they will be substantially less common than last year.

While numerous health experts, including those at the CDC, warn of a theoretical possibility that fully vaccinated people can still spread the virus, there is no definitive proof it’s actually happening.

Studies performed here in the U.S., the U.K., and Israel have shown the vaccine causes a significant reduction in infections and transmission. Even experts who believe that vaccinated people can spread the virus to others admit this risk is likely very low.

The main threat for a resurgence cited by most experts comes from coronavirus variants. But at least so far, data suggests the vaccines protect us against these variants.

Yes, as we have seen throughout the pandemic, the situation can change rapidly. But if you’re a sports fan, get your vaccine. Then buy your tickets, make your hotel reservations, and celebrate the return of sports.

Dr. David Geier is an orthopedic surgeon in Charleston and author of “That’s Gotta Hurt: The Injuries That Changed Sports Forever.”