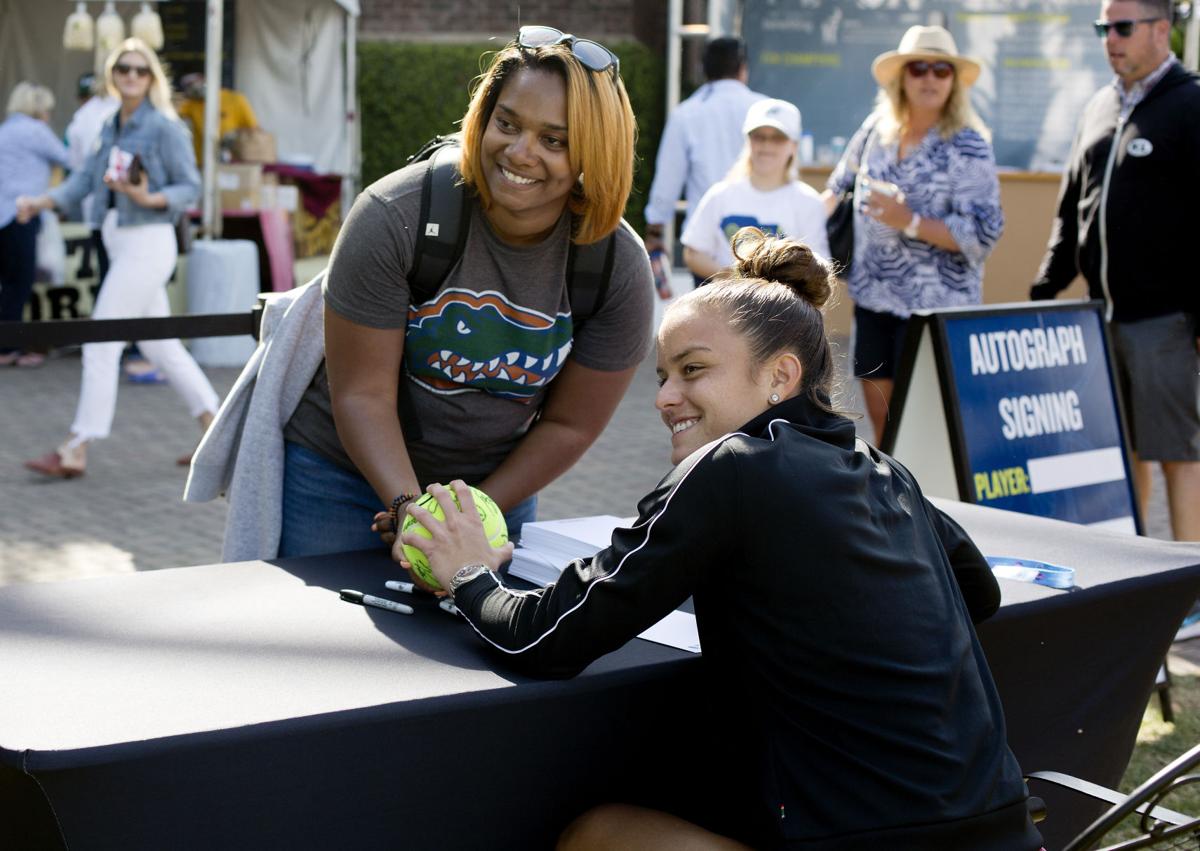 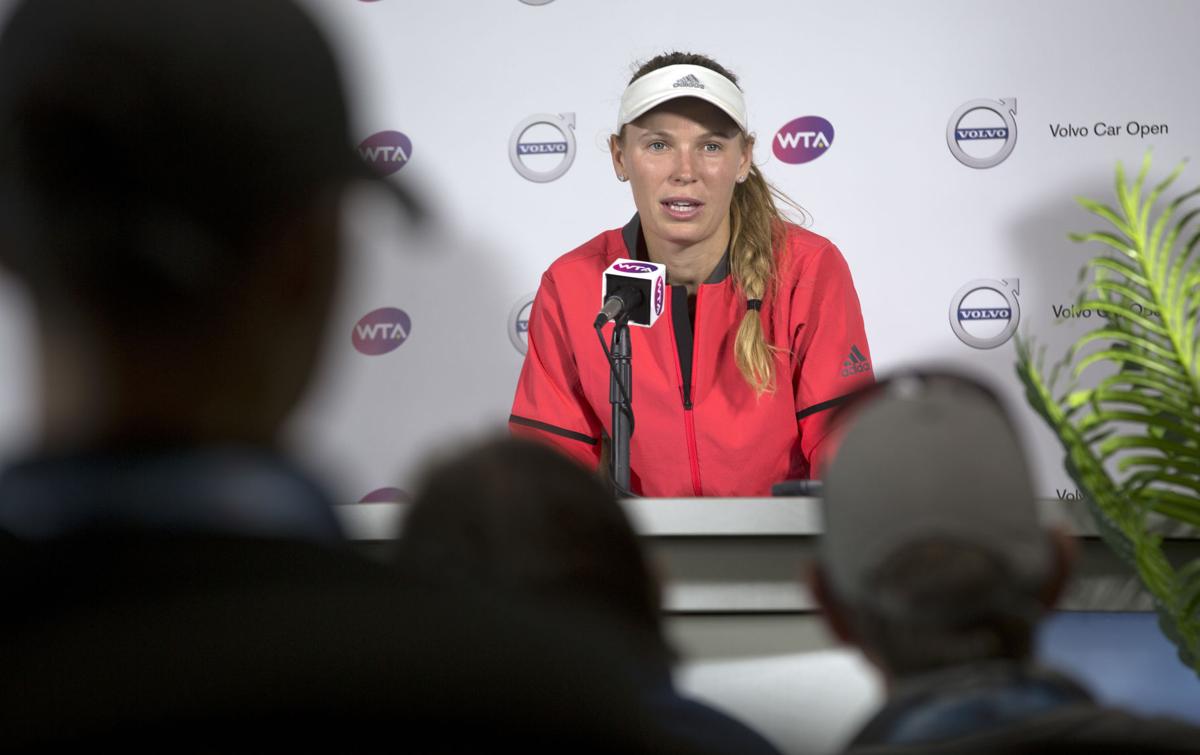 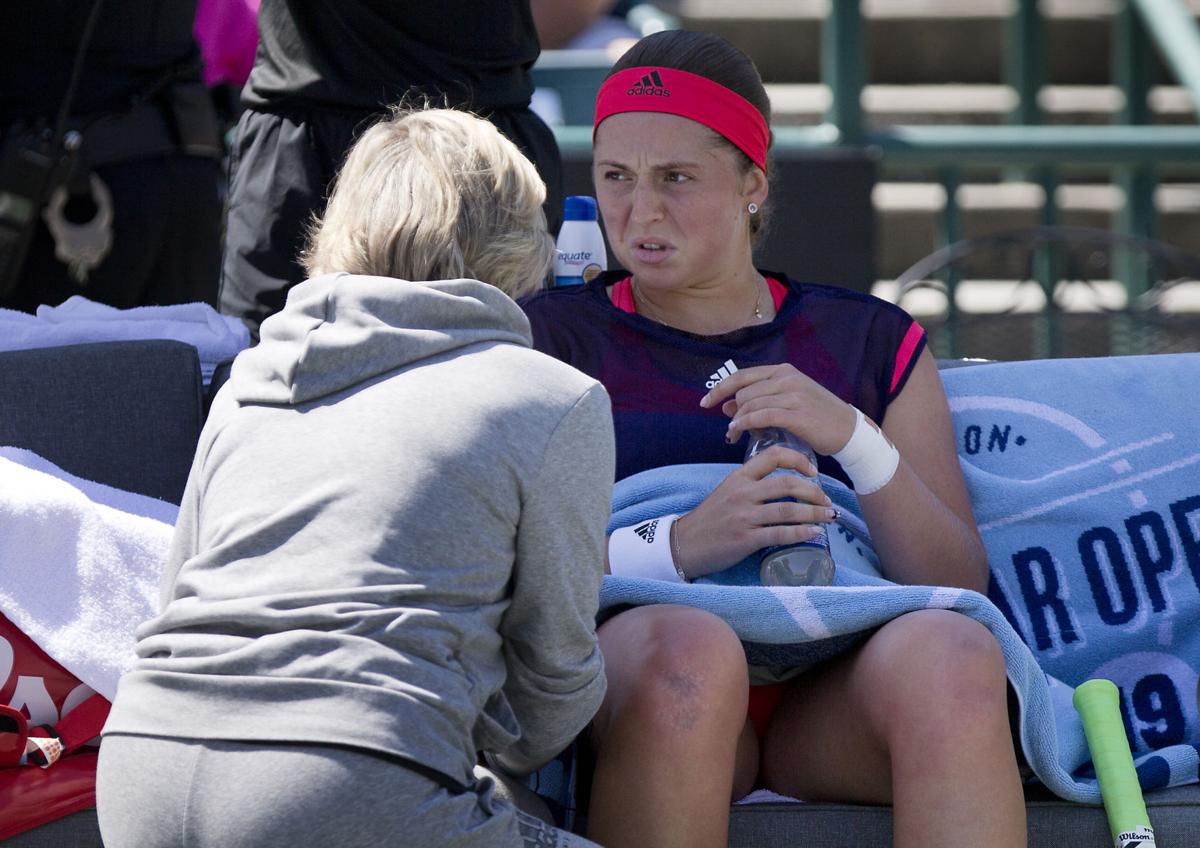 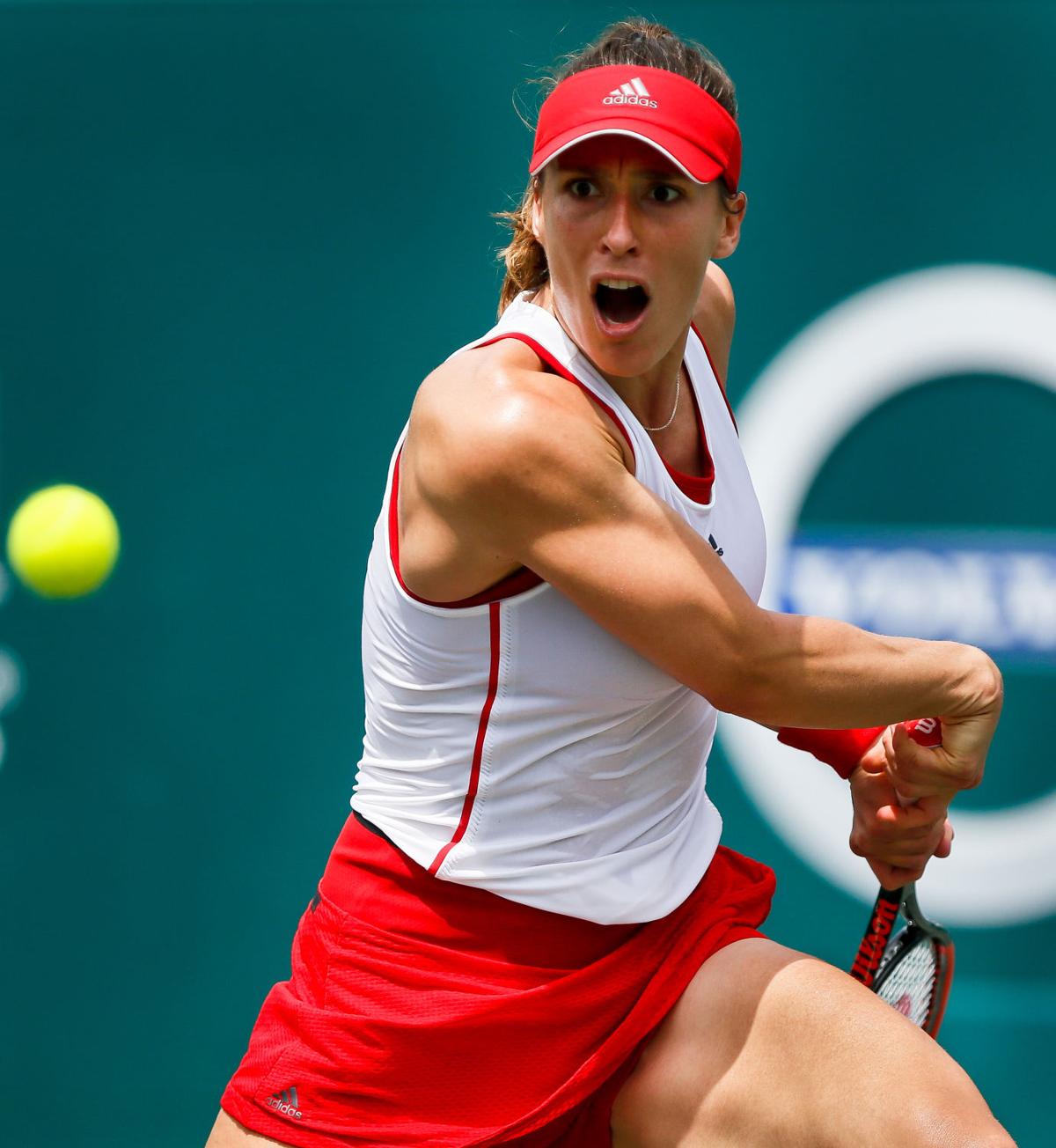 Andrea Petkovic returns the ball against Varvara Lepchenko at the Volvo Car Open on Monday, April 2, 2018. Lepchenko won the match 6-4 and 7-5. Andrew Whitaker/Staff 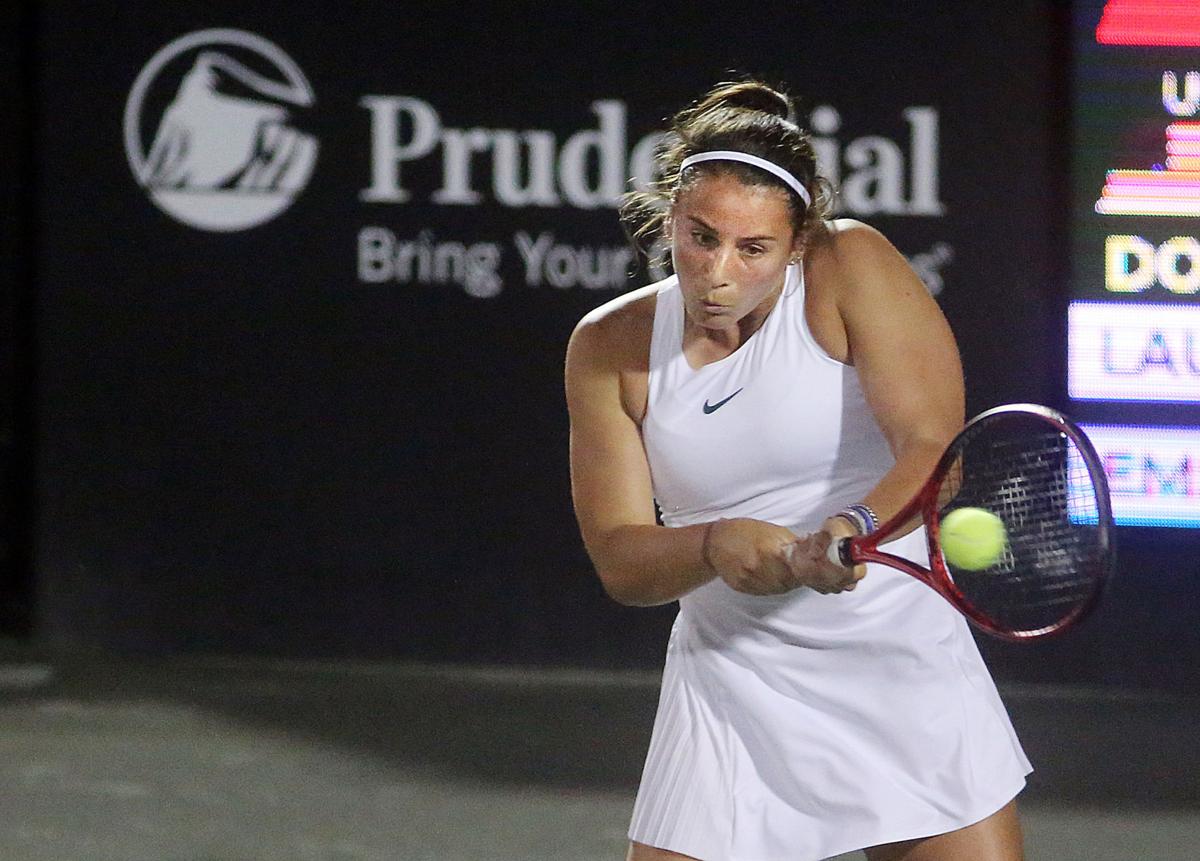 Emma Navarro returns a shot against Laura Siegmund during there match Tuesday at the Volvo Car Open. Brad Nettles/Staff

Charleston teenager Emma Navarro got a glimpse this week at what her future life might look like.

She mingled in the locker room with veteran pros, played under the bright lights on stadium court, did a live interview with Tennis Channel and faced the post-match media after a tough loss.

For one of the world's best junior players — and a 17-year-old who is still a junior at Ashley Hall — the Volvo Car Open provided insight into what life on the WTA Tour is like.

"It was very cool just like walking into the bathrooms and seeing people I've seen on TV and in the clubhouse and stuff," Navarro said after her loss in her pro debut Tuesday night to German veteran Laura Siegemund. "It was very cool.

"The professional (life), it's definitely different. But it was good to see how that works,  and I'm excited for the future, because now I've seen it behind the scenes, kind of."

Behind the scenes, in front of the TV cameras, the WTA Tour is full of drama and downtime. Victory, defeat, money, friendships, feuds, personal relationships, player parties and social media hate — it all plays out in a quasi-public forum that has its rewards and drawbacks.

"Don't do it!" WTA veteran Anastasija Sevastova joked this week when asked for advice for teenagers who aspire to the Tour.

Sevastova, 28, already has retired once and is ranked No. 12 in the world during this second phase of her career.

That's not always the case, of course. Navarro, for example, plans to play college tennis at Duke, more like the route of American star Danielle Collins, a two-time NCAA champion at Virginia.

"Going to college was crucial for me and my development," Collins once said. "I learned so much both on and off the court, and in the classroom."

But even after college, the WTA Tour is an education in itself.

"We play on a girls' tour, and (stuff) happens," said American star Sloane Stephens, who won the 2017 U.S. Open and has been ranked as high as No. 3 in the world. "A lot of (stuff) happens. Periods happen, parents happen, boyfriends, all types of stuff."

That's why having friends on tour is important, even if you might find yourself facing a friend in the second round in Bogota, or the finals at Wimbledon.

"Since we play an individual sport, it's kind of frowned upon to be friends with people you compete with," said Stephens, who also won the VCO in 2016. "I think that depends on the person. If I'm going to spend every week of my life looking at these people, I'm not going to be like, 'Oh yeah, it's a competition.'

"I'm literally traveling the world with these people," she said. "So it's really nice to say hi and act like you like them. Because one day you might be stranded in an airport with them. That's happened to me more than once."

The travel isn't always glamorous, either.

Aryna Sabalenka, ranked No. 10 in the world, has won almost $1 million this year. But late Sunday night, she found herself carrying three racquets in her hands while boarding a packed flight from Fort Lauderdale to Charleston that had been delayed by an hour.

Dealing with drama in public also is part of the deal. American Madison Keys, 24 and ranked No. 18 in the world, was in tears a couple of times during what seemed a routine opening match on Wednesday, a three-set win over Tatjana Maria.

"I think at some point, I kind of just said, 'Screw it,'' said Keys. "You're already down, you might as well go for it. And honestly, I started playing a lot more free."

A loss there might have exposed Keys to the sort of social-media hate — often from losing bettors — that has become part of today's game, as Charleston's Shelby Rogers was reminded after a year away from the tour due to a knee injury.

So close😩.....#tennisCue the haters, betters, and unnecessary insults that I didn’t miss for the past year 😂👋🏼

"I under-appreciated my year away from the game and the lack of hate messages I was getting," Rogers said after her second-round loss to 2017 French Open champion Jelena Ostapenko. "Now, I did not miss that at all. So now, I get to go on social media and just block a bunch of people. I'm excited."

And then there's healthcare. Weeks on Tour can be a grind, especially in the transitions from hardcourts to clay and grass and back to hardcourts.

"Listen to your body, that's the most important thing," said Rogers, who just came back from her first major injury. "There's really no reason to rush back before your body says its okay.

"And that's something I've had to maybe learn the hard way. The day you wake up and maybe you can't do everything you did the day before, just be really aware."

Tennis as a tool

In the end, perspective is key and perhaps the hardest thing to earn.

"Now, I think of tennis as more of a tool for me to evolve as a human and as a personality," said Andrea Petkovic, who is 31, won the VCO in 2014 and has been ranked in the top 10. "There are still so many things where I'm so stubborn, and sometimes I think I'm smarter than everybody else just because I read two books in my life.

"Those are the things I try to change, and tennis is a tool for me to achieve that, where I have to listen to others and evolve every day. In tennis when you don't do that, you get the cost right away.

"You have to pay your debts, and that's what I like about tennis."