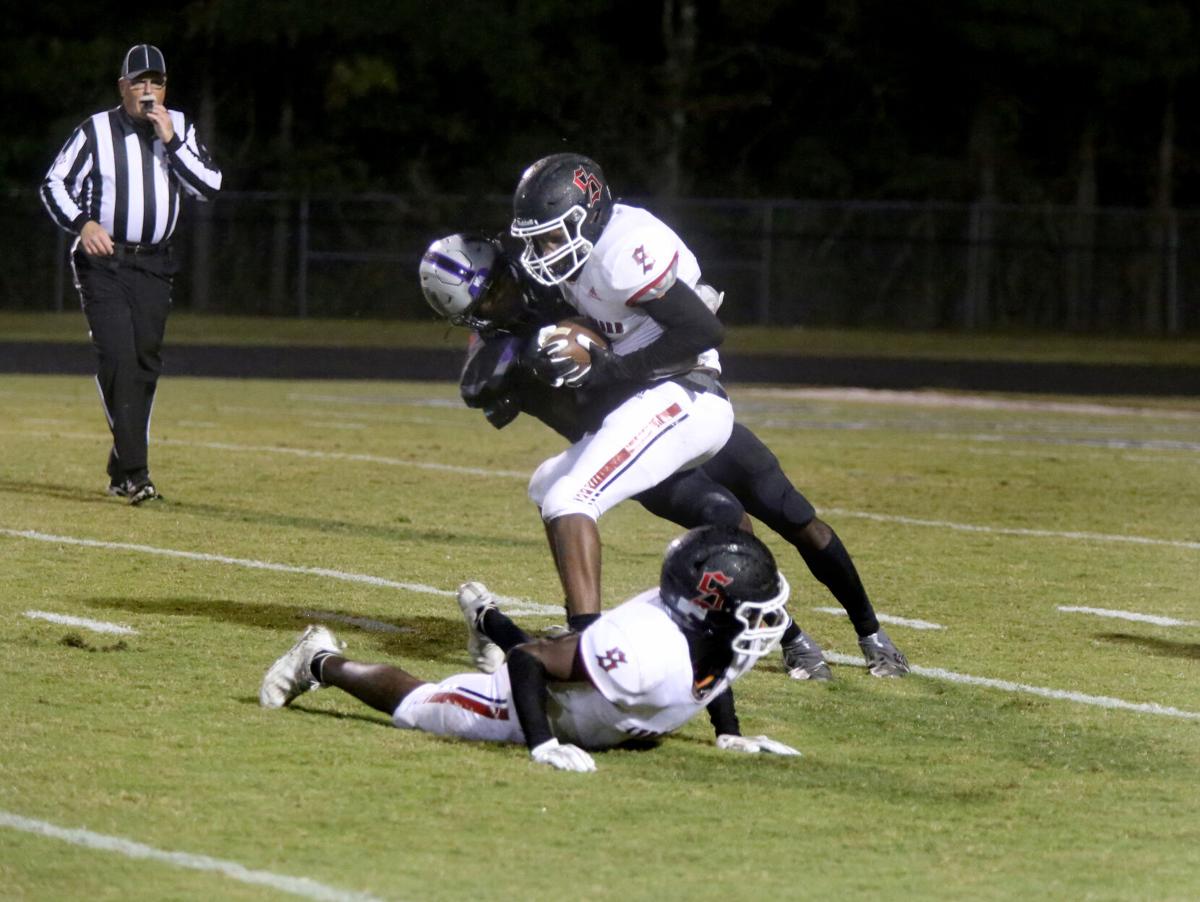 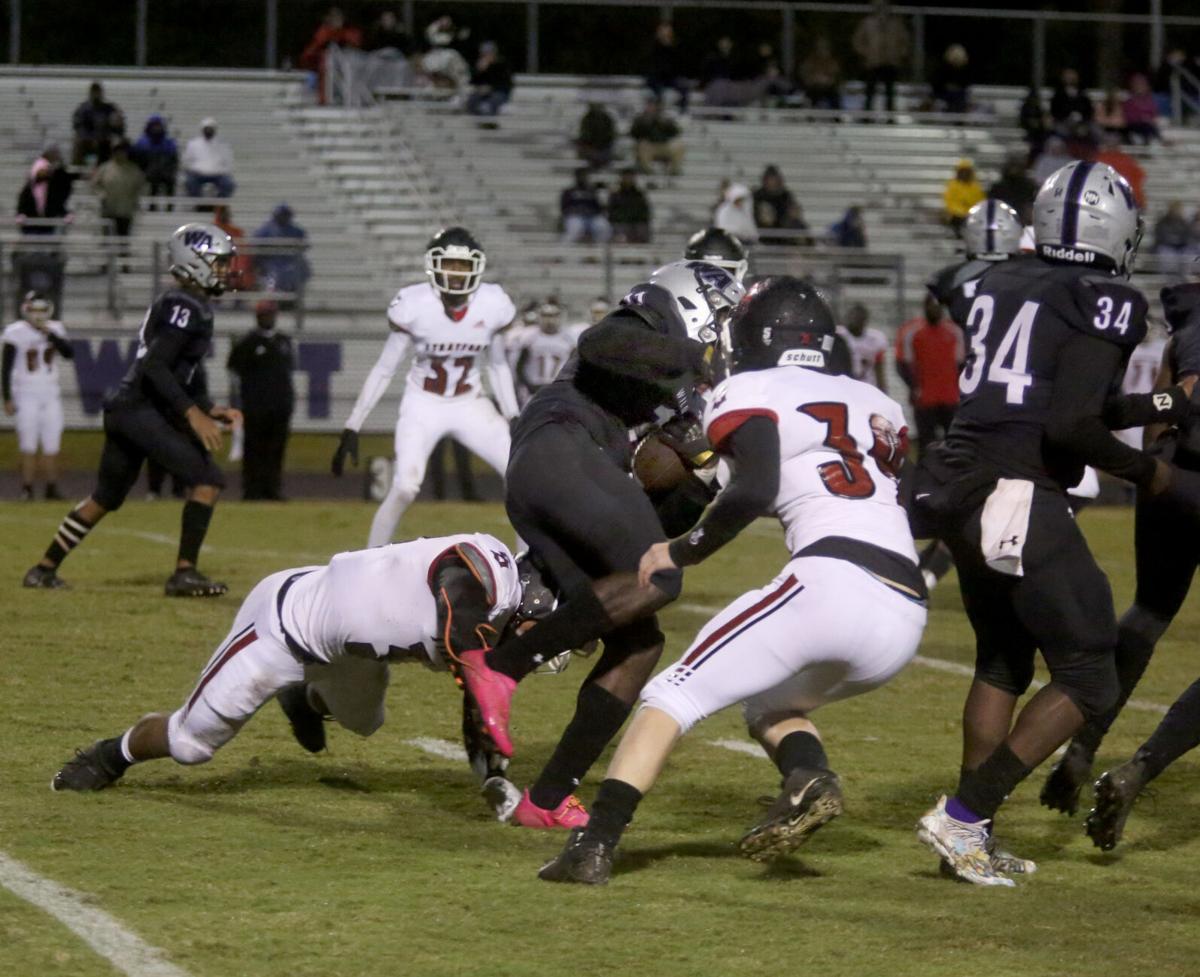 West Ashley’s Antwaine Chisolm gets taken down by the Stratford defense during their playoff game November 5, 2021. Brad Nettles/Staff 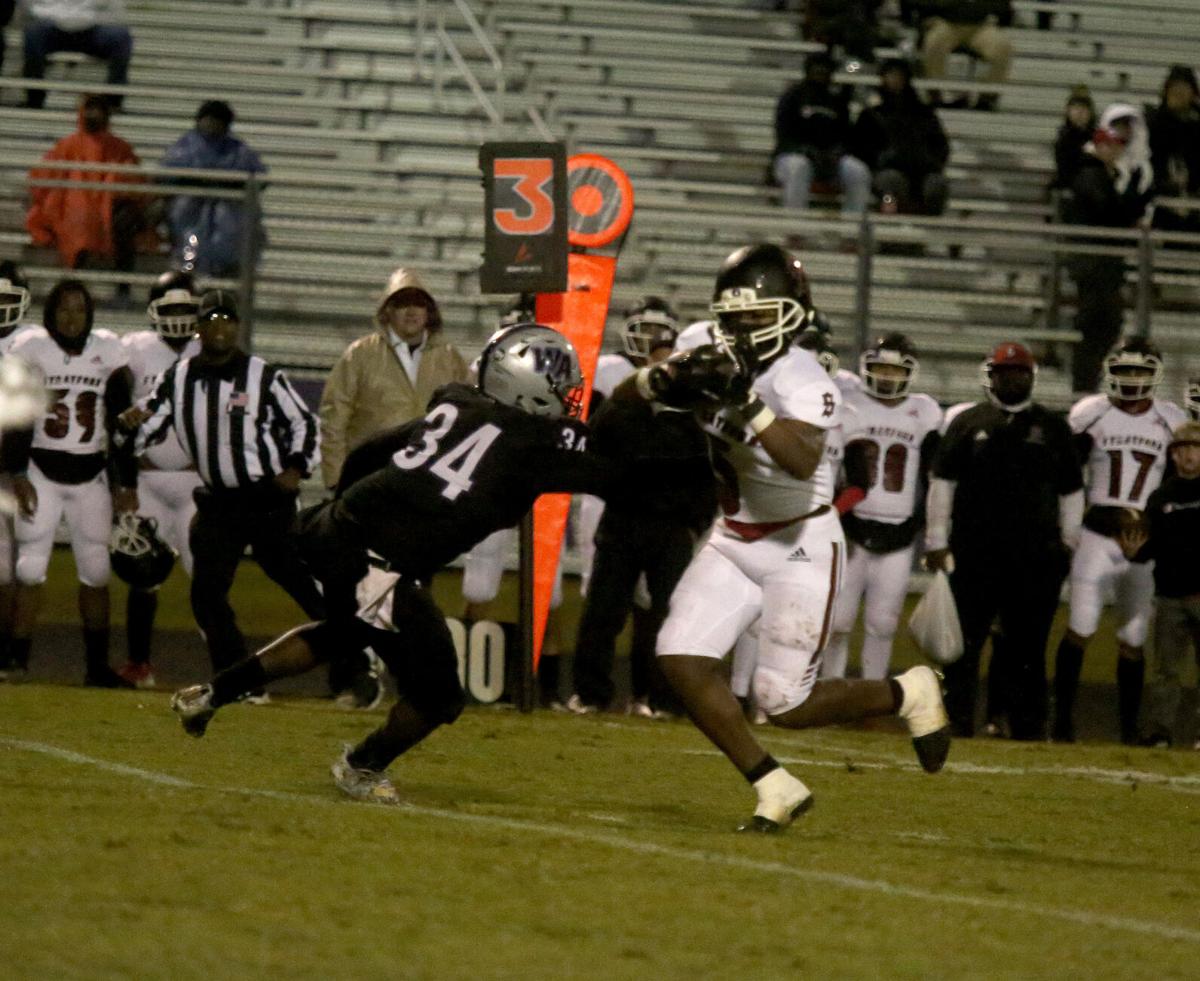 West Ashley’s Antwaine Chisolm gets taken down by the Stratford defense during their playoff game November 5, 2021. Brad Nettles/Staff

McDaniel and his Knights will get another opportunity to gain postseason experience after beating West Ashley 40-24 in the opening round of the Class AAAAA Lower State playoffs.

Stratford (4-4) advances to the second round at Sumter next week.

“We have seven seniors and a whole bunch of young ones, so this is huge for our program,” McDaniel said. “We are in Year 4, and every day we get better. We grew up a lot tonight. West Ashley is a good football team. I thought our kids did a great job of coming from behind and then putting the game away in the fourth quarter. Great win.”

One of the many underclassmen playing a key role on Friday was sophomore quarterback Jalen Barry. The 6-3 signal caller threw for nearly 300 yards, most in the first half, and accounted for five touchdown passes.

“We felt coming in that we could have success in the passing game,” McDaniel said. “We did a great job in the first half and then I thought we ran the ball with the lead in the fourth quarter.”

Stratford overcame a 10-point first-half deficit and ended the game on a 26-0 run.

West Ashley (5-5) rushed for more than 250 yards, with ZayeQuan Smith and Jahleel Porter each gaining more than 100 yards on the ground.

Porter put the Wildcats up midway through the first quarter with a 46-yard run, but Stratford and Barry answered two plays later. Berry connected with Quinn on a 59-yard touchdown pass to give the Knights a 7-6 lead with just under seven minutes remaining in the first period.

Quinn added a 4-yard run with 2:10 left in the first quarter to give the Knights a 14-6 lead. But, the running game of West Ashley struck again, this time with Smith racing 73 yards for a score with 1:48 to play. A two-point conversion attempt failed and Stratford led 14-12.

On the second play of the second quarter, Smith scored from 14 yards out to give West Ashley an 18-14 lead.

After Brandon Mungin intercepted a Barry pass, West Ashley went 51 yards on three plays with Porter scoring from 35 yards out with 10 minutes left in the second quarter.

Trailing 24-14 the Knights scored twice in the final 10 minutes. The first touchdown capped a 99-yard drive with Barry completing eight passes on the drive. The final 12 yards of the drive was a pass from Barry to freshman Timothy Lloyd, cutting the lead to 24-21 with 4:28 to play in the half.

After forcing a West Ashley punt, Stratford covered 64 yards on four plays. A 27-yard completion to Quinn was followed by a 35-yard touchdown toss to Christian Sinclair, giving the Knights a 28-24 halftime lead.

Berry had 265 yards passing at the break with Quinn grabbing six passes for 168 yards.

The Knights scored twice in the second half. Barry threw a pair of touchdown passes in the third quarter, then leaned on Quinn and Lloyd in the running game during the fourth quarter.

The Stratford Knights move on in the playoffs after defeating West Ashley Wildcats 40 to 24 in their playoff game Friday night.