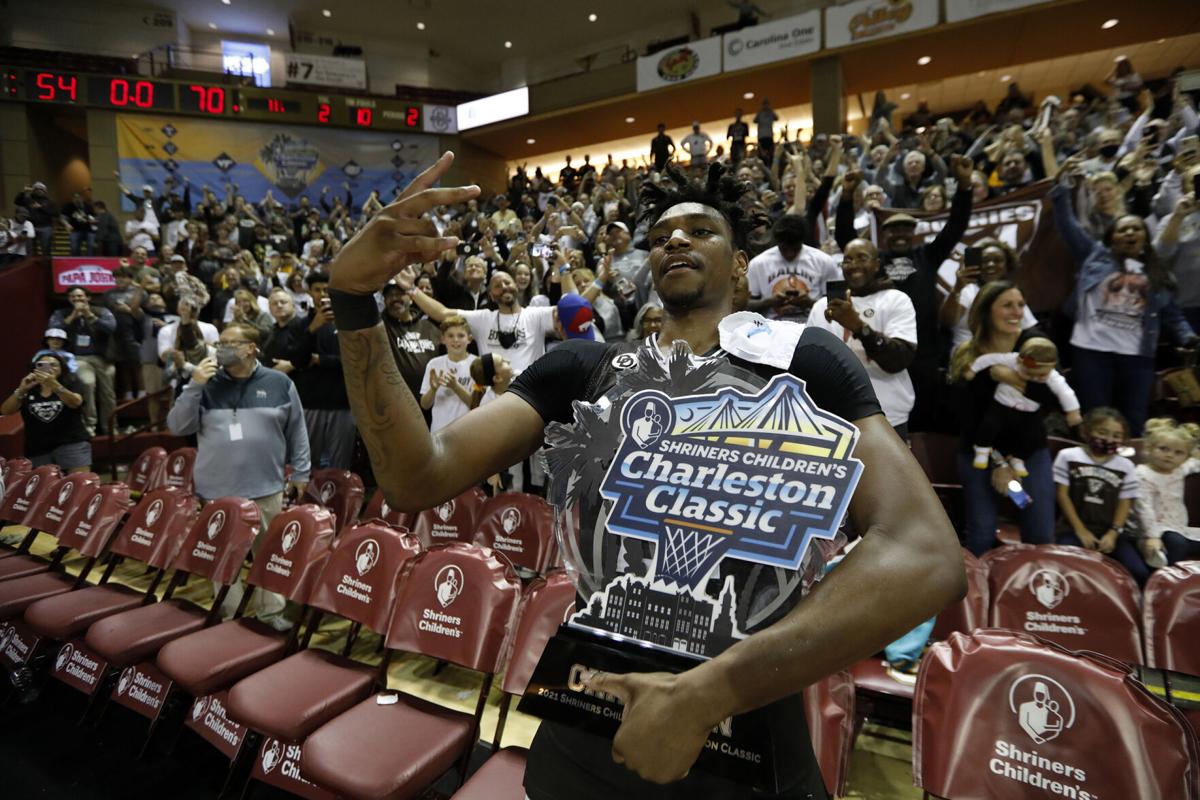 St. Bonaventure's Osun Osunniyi (21) looks for a shot over the defense of Marquette's Kur Kuath (35) in the first half of an NCAA college basketball game at the Charleston Classic finals in Charleston, S.C., Sunday, Nov. 21, 2021.

St. Bonaventure's Osun Osunniyi (21) dunks over the defense of Marquette's Kur Kuath (35) in the first half of an NCAA college basketball game at the Charleston Classic finals in Charleston, S.C., Sunday, Nov. 21, 2021.

St. Bonaventure's Osun Osunniyi (21) looks for a shot over the defense of Marquette's Kur Kuath (35) in the first half of an NCAA college basketball game at the Charleston Classic finals in Charleston, S.C., Sunday, Nov. 21, 2021.

St. Bonaventure's Osun Osunniyi (21) dunks over the defense of Marquette's Kur Kuath (35) in the first half of an NCAA college basketball game at the Charleston Classic finals in Charleston, S.C., Sunday, Nov. 21, 2021.

Jaren Holmes had 19 points and a career-high 13 rebounds, Osun Osunniyi added 16 points and 11 rebounds and No. 22 St. Bonaventure beat Marquette 70-54 on Sunday night to win the Charleston Classic at TD Arena, while Clemson fell 66-59 to West Virginia in the third-place game.

Osunniyi — who went into the game as the NCAA’s active leader in blocks per game (2.73) and had four on Sunday — made 8 of 10 from the field. Jalen Adaway had 14 points on 7-of-11 shooting and Kyle Lofton added 12 points, four assists and two steals.

Marquette missed its first nine field-goal attempts in the second half as Holmes and Adaway scored six points apiece in a 16-2 run that gave St. Bonaventure (5-0) a 49-27 lead with 13 minutes to go. The Bonnies led by double figures the rest of the way.

Osunniyi and Adaway had back-to-back dunks to give St. Bonaventure (5-0) the lead for good at 17-15 midway through the first half and then scored 10 of the last 13 before the break to make it 33-25 at halftime.

Darryl Morsell, a graduate transfer from Maryland who came in averaging a team-leading 20.2 points on 54.5% shooting, scored a season-low three points for the Golden Eagles, going 0 for 8 from the field.

Sean McNeil scored all 15 of his points in the final 10:12 of the game and West Virginia rallied past Clemson in the third-place game — handing Mountaineers’ coach Bob Huggins his 904th career victory.

The win moves Huggins past Roy Williams to fourth place on the all-time list. Huggins, in his 39th season, trails only Mike Krzyzewski (1,170), Jim Boeheim (982) and Jim Calhoun (918).

West Virginia led 35-34 at halftime in a game that saw 14 lead changes. Clemson (4-2) trailed 39-38 when Hunter Tyson hit a layup and Al-Amir Dawes sank a 3-pointer to spark an 11-0 run that put the Tigers ahead 49-39 with 14 minutes remaining in the game. The Mountaineers trailed 49-41 when McNeil sank his first shot. McNeil sank a 3 with 6:29 left to get West Virginia within 54-50. Following a layup by Clemson’s Naz Bohannon, McNeil hit two shots in a 10-0 run that gave the Mountaineers a 60-56 lead with 2:03 to go and they stayed in front from there. McNeil made two free throws with 17 seconds left for a 64-59 lead after Clemson received a technical foul for having six players on the court. He sank two more with 3 seconds remaining.

Taz Sherman finished with 12 points for West Virginia. McNeil missed all four of his first-half shots before knocking down 5 of 8 after intermission.

Dawes scored 15 of his team-high 18 points in the first half for Clemson. PJ Hall and Nick Honor scored 10 points apiece.

The Broncos (3-2) nearly doubled their shooting percentage from 32% in the first half to 61% after the break, stringing together an 11-3 run early in the second to forge a 34-34 tie and stay within two possessions of Ole Miss (3-2) thereafter.

Jarkel Joiner was the lone Ole Miss player to reach double figures with 10 points, three after halftime. Ole Miss came in averaging 80.3 points per game but shot 37% and was just 2-of-10 from distance.

Jeremiah Williams added a career-high 22 points for the Owls, who snapped a three-game losing streak in the game for seventh place. Williams also had eight rebounds and eight assists.