Clemson quarterback Trevor Lawrence holds up the Fiesta Bowl trophy after the Tigers' 29-23 win over Ohio State on Saturday. Looking ahead to next season, Lawrence will be a favorite for the Heisman Trophy and Clemson will be expected to return to the College Football Playoff. Rick Scuteri/AP 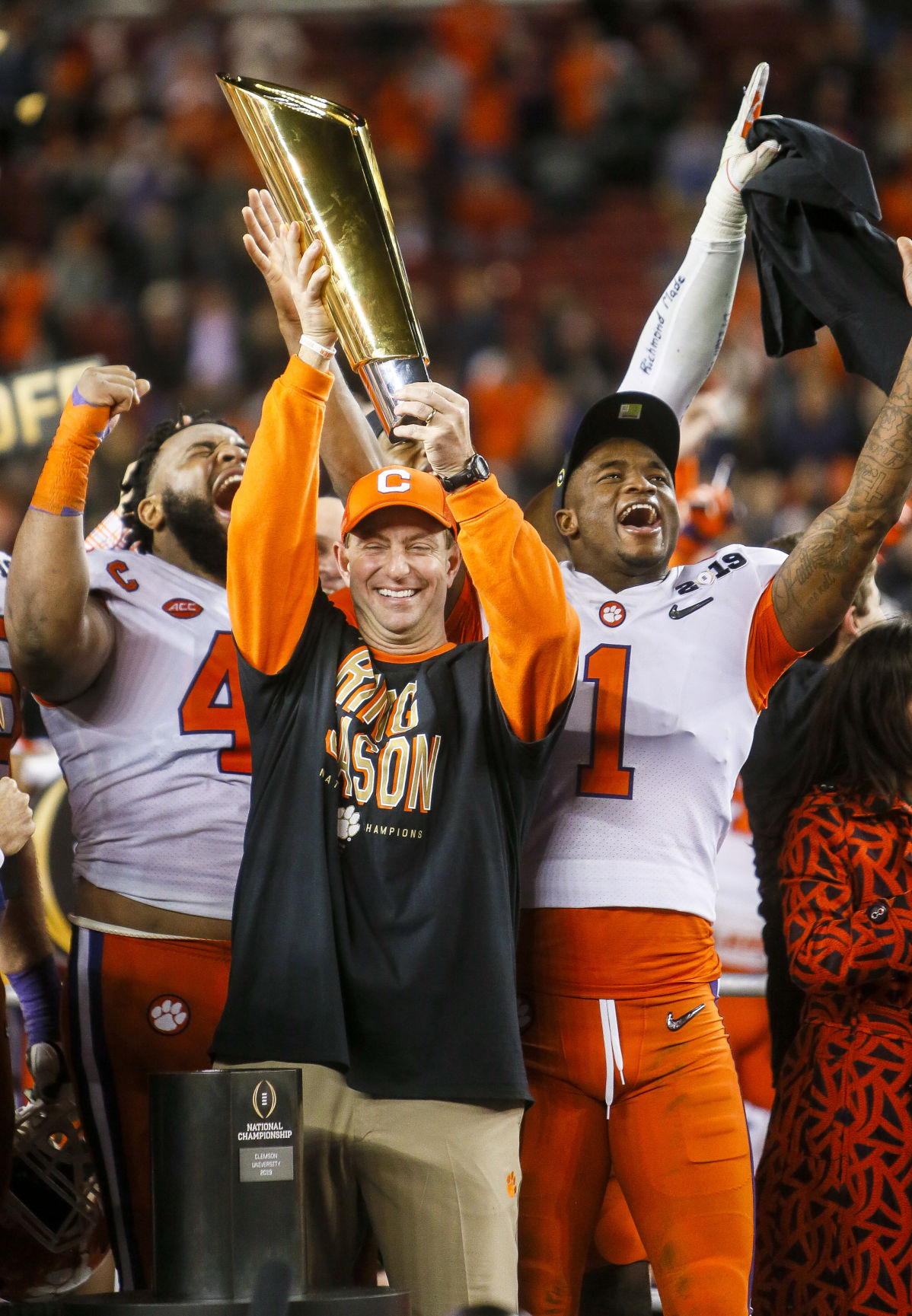 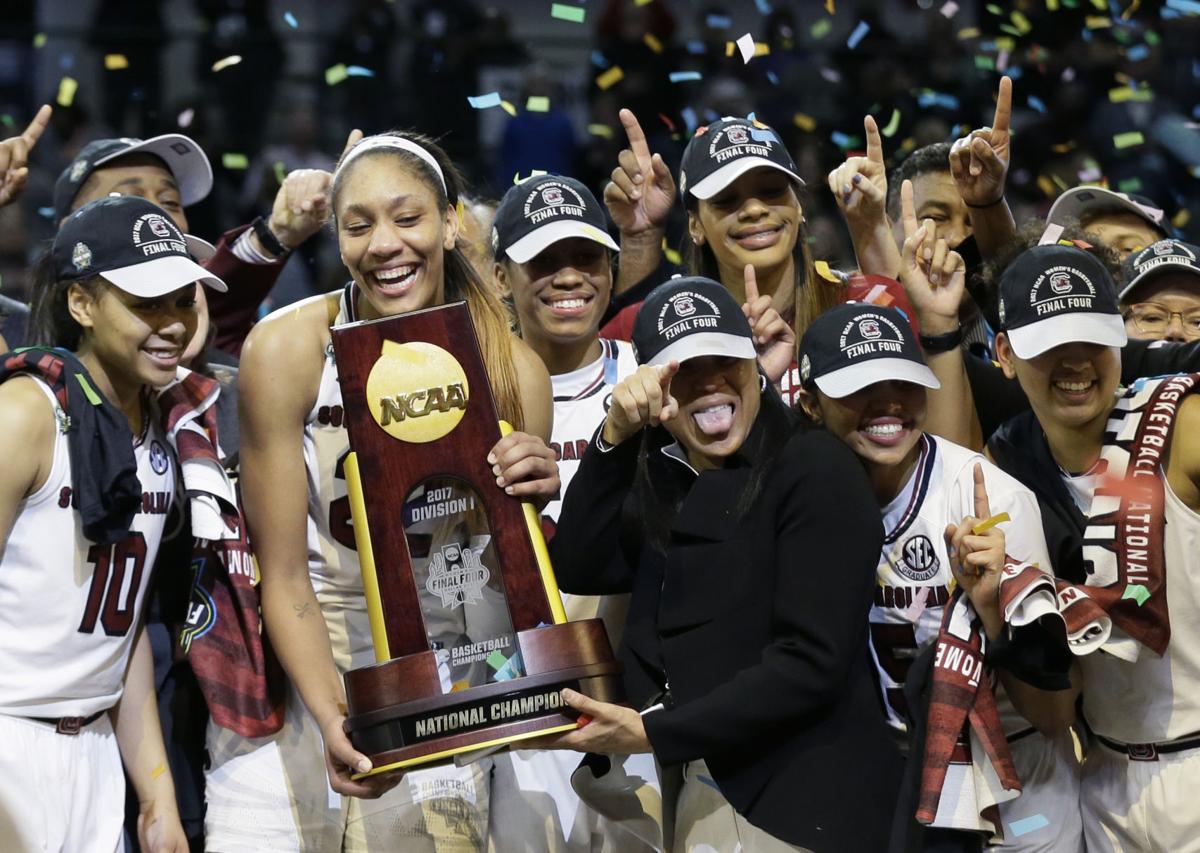 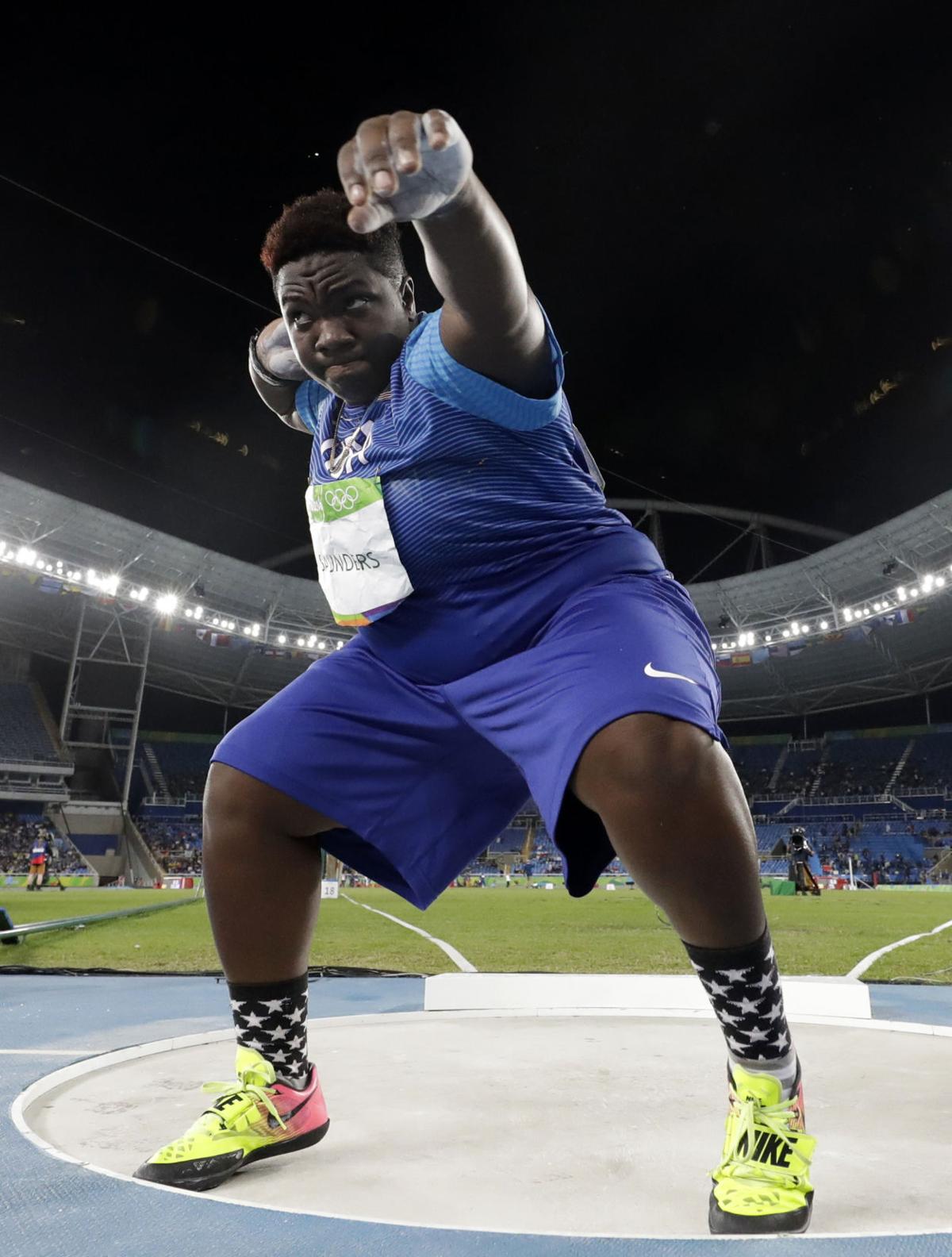 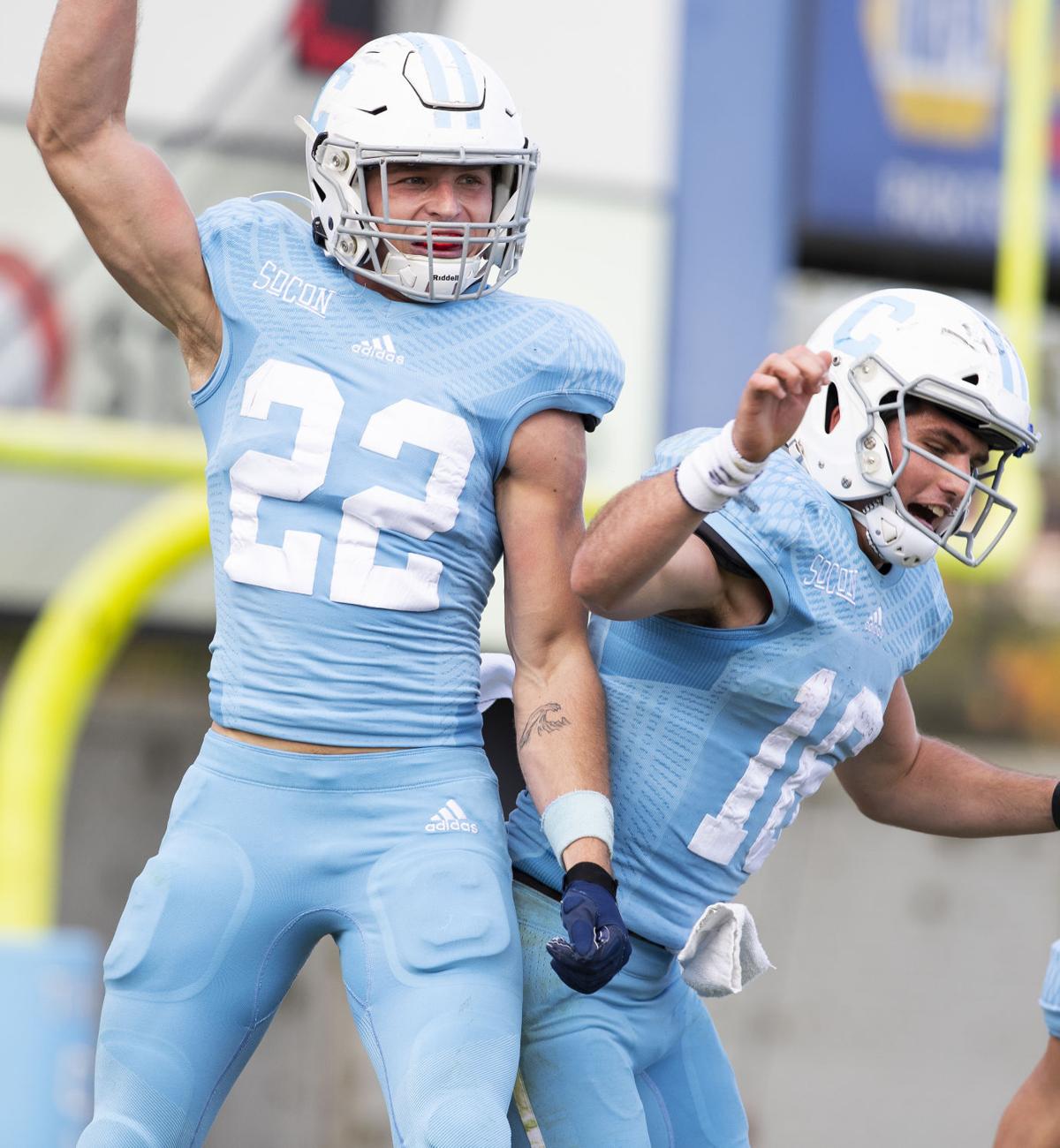 The Citadel's Raleigh Webb celebrates with Brandon Rainey after making a catch in the end zone for a two-point conversion during a game against Wofford at Johnson Hagood Memorial Stadium on Nov. 23, 2019. File/Lauren Petracca/Staff

Clemson quarterback Trevor Lawrence holds up the Fiesta Bowl trophy after the Tigers' 29-23 win over Ohio State on Saturday. Looking ahead to next season, Lawrence will be a favorite for the Heisman Trophy and Clemson will be expected to return to the College Football Playoff. Rick Scuteri/AP

The year 2020 is the year of the metal rat, according to the Chinese zodiac.

But if you prefer the Gospel of Dabo, there seems to be little to prevent 2020 from being the year of the Tiger — again.

Win or lose in the 2019 national championship game on Jan. 13 against LSU, coach Dabo Swinney's Clemson juggernaut is set to roll again in 2020. With the nation's No. 1 recruiting class joining star quarterback Trevor Lawrence for what will be his junior season, Clemson football will surely be the state's No. 1 sports topic in the upcoming year.

Here's a look ahead at 20 sports stories that will be trending in the Lowcountry and in the state in 2020.

The lanky quarterback with all the flow didn't get much love in the 2019 Heisman voting, collecting only three first-place votes to finish seventh, well back of winner Joe Burrow of LSU.

That was due to what was perceived as a slow start for the 6-foot-6 Lawrence. But he finished the season with standout numbers — 68.8 percent completions for 3,172 yards and 34 touchdowns against eight interceptions — while running for 407 yards and seven more scores.

Only one of the Heisman vote-getters who finished ahead of him, Ohio State QB Justin Fields, should return next season. Coupled with his performance in a stirring come-from-behind semifinal victory over Ohio State, a standout showing in the national title game would get Lawrence's 2020 Heisman campaign off to a shiny start.

2. Can Will Muschamp keep his job?

When the rubble settled after a disastrous 4-8 record in his fourth season, South Carolina football coach Will Muschamp held on to his job — but just barely, it seemed.

Muschamp was forced to reshuffle his coaching staff and hire a new offensive coordinator, and also gave up an automatic annual raise of $200,000, reducing his potential buyout after the 2020 season from $15.3 million to $13.2 million.

Muschamp is betting that new offensive coordinator Mike Bobo can make something out of a shaky quarterback situation, with Ryan Hilinski coming off knee surgery and freshman Luke Doty and transfer Collin Hill from Colorado State joining the QB room. The state's top recruit, Hammond defensive end Jordan Burch, will provide a big boost if he follows through on his commitment by signing in February.

With Dawn Staley's South Carolina women's basketball team off to a 12-1 start and ranked No. 4, it's not to soon to ask: Where is the Final Four this season?

One of the four regionals is set for the Bon Secours Wellness Arena in Greenville on March 27-30. The four regional champs head to the Smoothie King Center in New Orleans for the Final Four on April 3 and 5.

Staley's Gamecocks are gunning for their third Final Four and second national championship in six seasons.

With the Olympic Trials set for June, can Saunders and Camacho-Quinn — both three-time NCAA champs in their events — regain Olympic form in time for Tokyo 2020 in July? Stay tuned.

It's shaping up as quite a birthday party as the Volvo Car Open women's tennis tournament celebrates its 20th year on Daniel Island in April.

South Carolina's recent victory over defending NCAA basketball champ Virginia suggests the Gamecocks could make it to March Madness in 2020. Clemson's loss to the Ivy League's Yale suggests that the Tigers won't.

After losing just twice in their first 26 games, the South Carolina Stingrays look like a good bet in the ECHL playoffs, set to start in April.

The Stingrays have won the Kelly Cup three times, the last time in 2009, and made the finals in 2015 and 2017. January, February and March are chock-full with 26 home games at the North Charleston Coliseum.

The state's 2019 college baseball season was a forgettable one, with only Clemson making the 64-team NCAA Tournament field (and the Tigers went out with a quick 1-2 showing).

Are coaching seats warming up in Clemson and in Columbia? Has College of Charleston put all its courtroom drama behind it? Can Coastal Carolina regain the form that won a College World Series title in 2016?

We won't have to wait long to find out. Baseball starts in February.

The Charleston Battery will be under new ownership and will have a new home in 2020 at College of Charleston's Ralph Lundy Field at Patriots Point in Mount Pleasant.

Former Battery principal owner Eric Bowman and B Sports Entertainment sold MUSC Health Stadium on Daniel Island – the club’s home for the past two decades – last May to Holder Properties for $6.4 million. The stadium is set to be demolished for commercial or residential development.

What is the club's long-term future under new owner Rob Salvatore, who takes over the oldest continually running pro soccer club in the U.S.?

In 2019, Citadel football knocked off an ACC foe for the first time (Georgia Tech), won at Furman and remained in contention for the Southern Conference championship until the final weeks of the season.

Can the Bulldogs break through the .500 wall in 2020? The return of quarterback Brandon Rainey and receiver Raleigh Webb as fifth-year players will help, as does a schedule that includes five home games in the first seven.

The High School League's plan for 2020-22 will surely cause the usual heartburn and appeals for justice. Biggest movers locally are James Island Charter (from Class AAAAA down to AAAA) and Oceanside Collegiate (from AA to AAA).

The Carolina Panthers and the city of Rock Hill will continue working toward a $2 billion deal that will bring the NFL team's headquarters to the S.C. town just south of Charlotte.

The Charleston County School District's new $22.5 million regional football stadium in North Charleston should open in the fall of 2020. It will be the home field for North Charleston, Stall, Academic Magnet and Military Magnet high schools.

May 17 of 2020 will mark exactly one year from the return of the PGA Championship to the Ocean Course on Kiawah Island. The major championship is set for May 17-23 in 2021. Tiger Woods will be 45 years old.

The new $22.5 million Aquatics Center near Fort Dorchester High School, built by the City of North Charleston and Dorchester School District 2, should be ready to open in the spring of 2020. Everybody in the pool!

After a year off for the U.S. Women's Open, the Azalea Invitational, one of the country's top amateur golf tournaments, returns to the Country Club of Charleston March 26-29. No word on Tony Romo's entry.

The Charleston RiverDogs will escape the axe as Major League Baseball tries to trim its minor-league system by 42 teams after the 2020 season. But the future of the minor-league landscape will continue to be a major story in small towns across the country.

The S.C. High School League set up a committee to study how to handle "non-traditional schools" such as charter schools (Oceanside Collegiate) and private schools (Bishop England) and their perceived competitive advantages. The committee's recommendations, if any, should be known in 2020.

Coach Autry Denson's Charleston Southern football team won its last four games to finish 6-6 in his first season. In 2020, the Bucs will get shots at The Citadel and Arkansas of the SEC.

Pucks, Pride, plates and paws lead the way for an eventful Charleston weekend

It's a busy weekend in Charleston with special promo nights with the S.C. Stingrays, Mex 1 Cantina's Snowboard Rail Jam, the kickoff of Restaurant Week and more.

The Citadel outscored Wofford by nine points in the final 40 seconds of Saturday night's basketball game at Richardson Indoor Stadium. Unfortunately for the Bulldogs, they were behind by 11.

The Citadel is ready to install artificial turf at Johnson Hagood Stadium, with the new surface slated to be finished by the end of April.