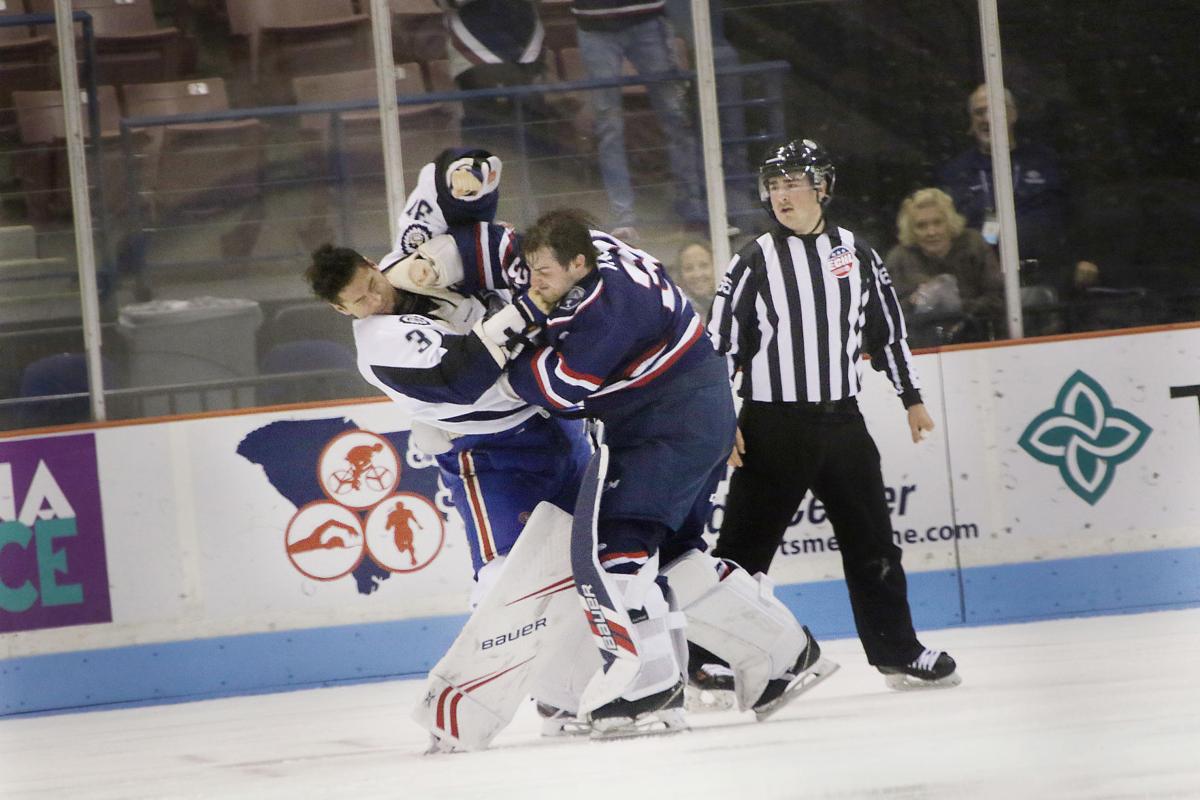 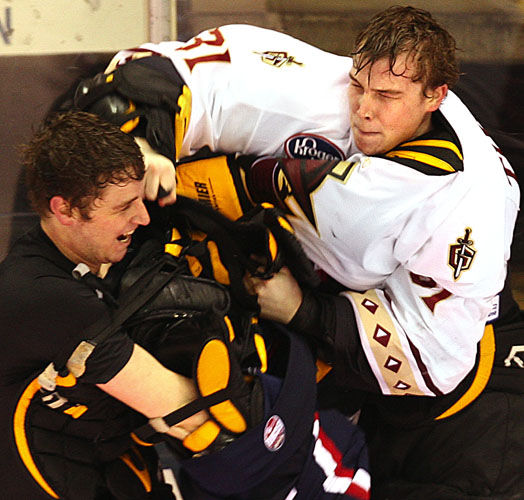 South Carolina Stingrays goalie Logan Thompson was 12 minutes away from his second professional shutout when things got crazy.

The Stingrays game with the Jacksonville Icemen was "chippy" from the drop of the puck last Sunday. There had been plenty of after whistle scrums, including the obligatory pushing and shoving between the two ECHL South Division rivals throughout the first two periods.

The Icemen took exception to what they perceived as Vanderlaan’s rough treatment of their goalie. Defenseman Dalton Thrower jumped on Vanderlaan and began to pummel him with punches. Thrower was issued a two-minute roughing penalty and a game misconduct by the referee Riley Yerkovich. The ECHL would later suspend Thrower for a game for his actions.

A minute later, Jacksonville’s Emerson Clark collided with Thompson in retaliation for Vanderlaan’s hit on McNiven.

“Mitch didn’t run into their goalie on purpose,” said Stingrays forward Cole Ully. “He kind of got pushed by one of their defensemen and maybe he could have let up a bit, but that’s hockey. They just came down and blatantly ran into Logan.”

Fighting in professional hockey is on the decline, down 70 percent in the NHL over the last 10 years. But players and coaches say it will always be a part of the game.

A couple of minutes later things really got out of control.

During the ensuing Stingrays' power play, Icemen defenseman Kyle Shapiro slashed Ully and then Evert Clark, Emerson’s younger brother, tackled Ully and the fight was on.

Thompson was skated to the bench so the Stingrays could get an extra attacker on the ice for the delayed penalty when, out of the corner of his eye, he saw McNiven skating down the ice.

It had been a week since Thompson had played in a game and was 26 saves towards his second shutout. Thompson is having an excellent start to his rookie season, going 8-2-1 with a 2.37 goals against average and a .919 save percentage. The last thing the Calgary, Alberta, native wanted to do was drop the gloves and get into a fight.

“We were up 2-0, I had a shutout going, I wanted to finish the game,” Thompson said.

But as McNiven began to shed his gloves, blocker and goalie mask, Thompson realized he didn’t have much of a choice.

Fun fact: the 22-year-old Thompson had never been in a fight on the ice.

“Once he started to take his gear off, I knew I was going to have to fight,” Thompson said.

In a bit of WWE theatrics, the two linesmen, who would have normally stopped the Jacksonville goalie from crossing red line, were trying to break up the fight between Ully and Clark, so they didn’t see McNiven coming down the ice.

Any goalie that crosses the red line is automatically issued a game misconduct penalty.

Fighting has steadily dropped across all levels of hockey and is down as much as 50 percent in the pro ranks over the past decade. A goalie fight is even rarer still. The last goalie fight that many Stingray fans remember came a more than decade ago when Jonathan Boutin fought Atlanta’s Dan Turple during the 2008-09 season.

“I’ve never seen a live goalie fight in person and especially during a game I was playing in,” Ully said.

For his first fight, Thompson conducted himself in a respectable fashion, connecting on a couple of jabs and glancing right hand.

“My mindset going in was not to get hit, be more defensive; I thought I held my own,” Logan said. “Obviously, it’s not something a lot of goalies get to do. I thought I did OK under the circumstances. I’m not a fighter, and I don’t plan on fighting again.”

Both players were issued game misconducts and escorted off the ice.

The Stingrays other goalie, Parker Milner, had planned on taking the afternoon off after playing in back-to-back games already that weekend.

“It happens, but I was really proud of Logan for standing up for himself,” said Milner, who leads the ECHL with five shutouts this season. “It was a bizarre situation. It was still a close game, so I’m not sure why any of that had to happen. You don’t see that every day. I know the guys on the bench were really fired up afterwards.”

Milner would play the final 12 minutes and make 12 saves on 13 shots as the Stingrays would go on to win 2-1. The game featured 113 penalty minutes as three Jacksonville players were eventually suspended for at least one game by ECHL officials.

The two teams are set to meet again in Jacksonville on Saturday. The Icemen won’t return to North Charleston until mid-January.