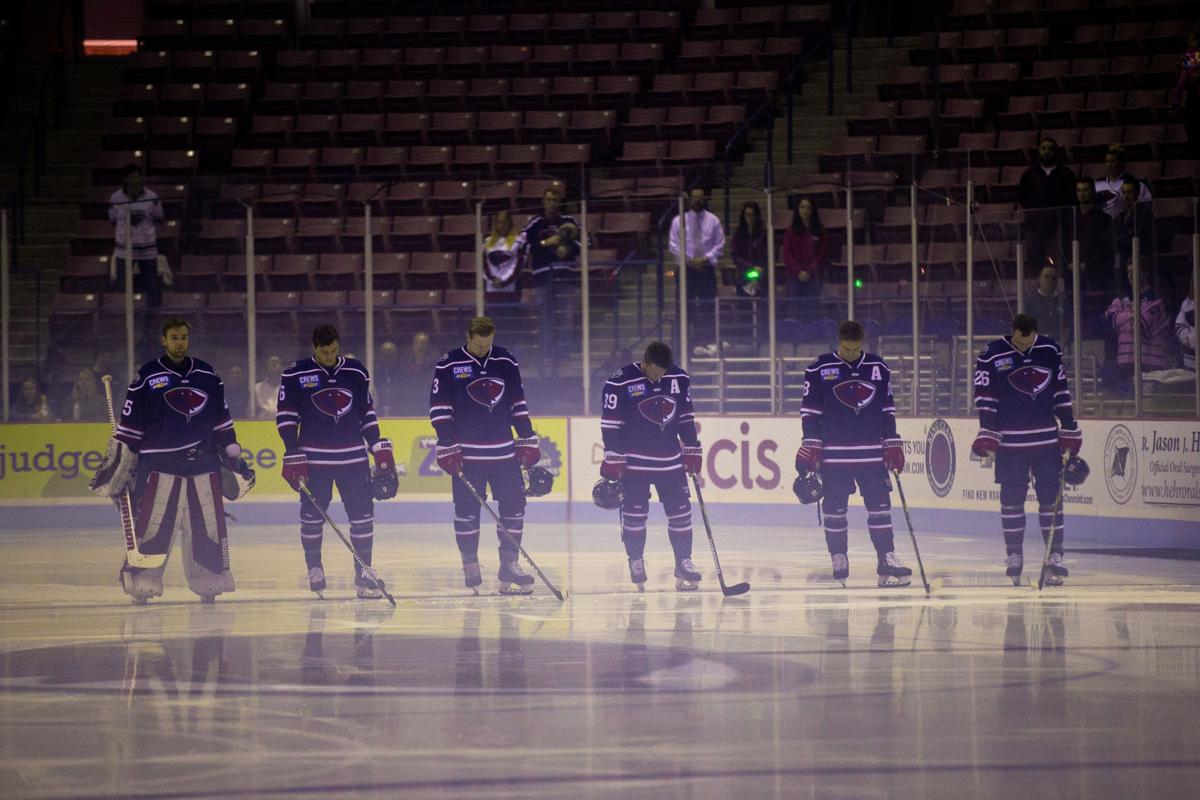 The South Carolina Stingrays had the best record in the ECHL when the season was canceled due to the coronavirus pandemic. The Stingrays won, 2-1. Andrew Whitaker/Staff 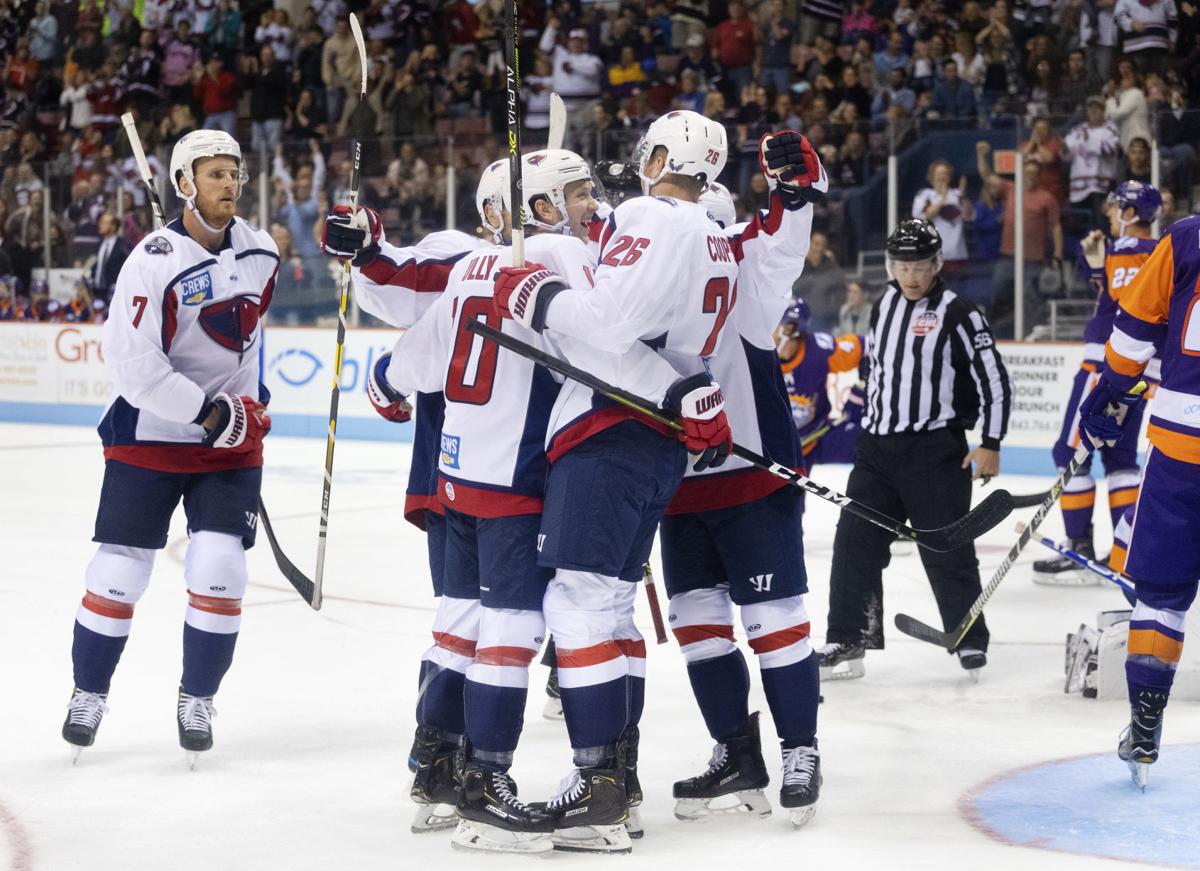 The South Carolina Stingrays have the best defensive team in the ECHL. Brett Lemmo/Special to the Post and Courier 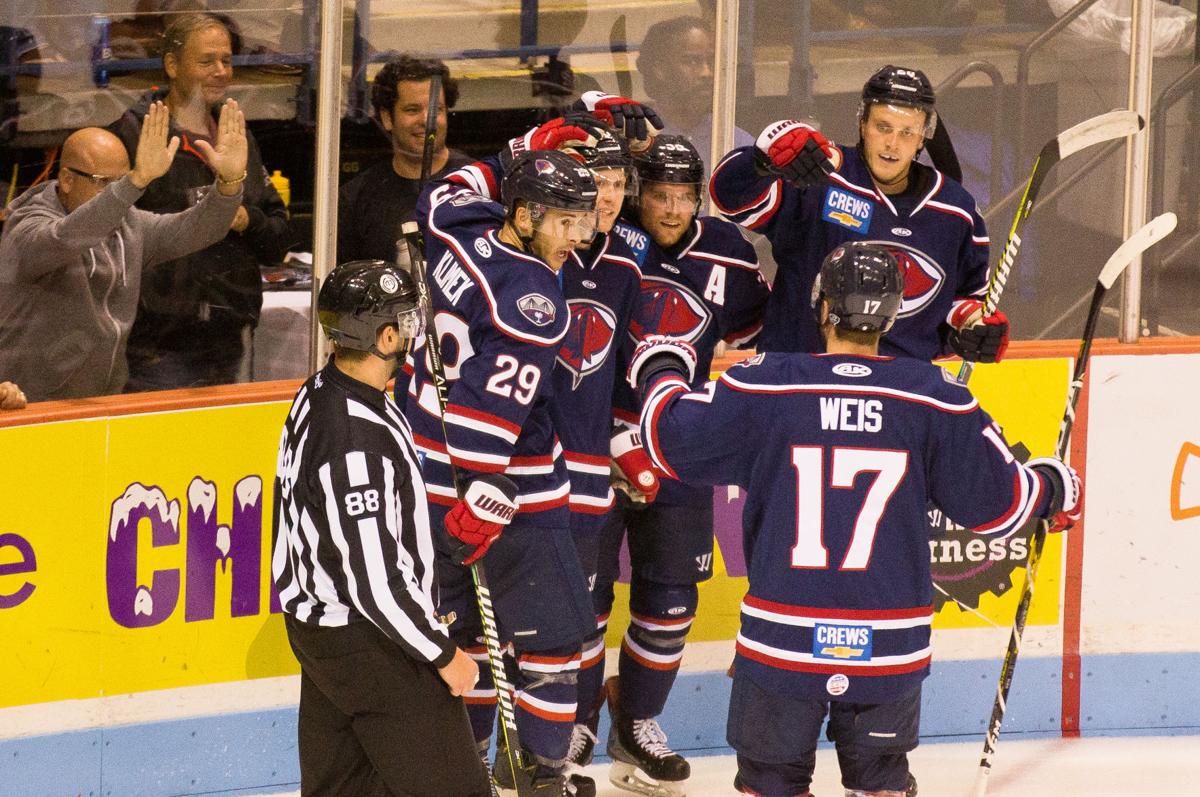 The South Carolina Stingrays' .742 winning percentage was the best in the franchise's 27-year history. Andrew Whitaker/Staff

It’s been more than a week since the ECHL decided to cancel the rest of the hockey season because of the coronavirus pandemic.

The wounds from the abrupt cancellation of the season are still fresh for the coaching staff and players for the South Carolina Stingrays. The Stingrays were in the midst of an historic regular season. With 10 games to play, the Stingrays had already won 44 games, just four short of the franchise record.

They had the best record in the ECHL, and had they won at their current .742 pace, they would have likely finished the season with 107 points in the standings – the most in the franchise’s 27-year history – and would have been the favorites to win an ECHL record fourth Kelly Cup championship.

Now that the players have finished up their exit interviews and physicals and for the most part left town, Stingrays coach Steve Bergin has had a little time to reflect on the season.

“I think the thing that hurts the most is that there was no real closure to the season,” Bergin said. “We will also have those haunting thoughts of what could have been. Guys chase championships their whole careers. When guys look back on the year we had, I think they will have great memories and positive feelings, but there will always be that question of what if, what could have happened in the playoffs.”

“It’s like they could see the finish line and then it was just taken away,” said Seitz, who helped lead the Stingrays to Kelly Cup title in 1997 and 2001. “You get judged on what you do in the playoffs. No one remembers what happens in the regular season. My heart breaks for those guys because winning a championship is special. It’s a special bond you share with the guys in that locker room and the fans. As a player, you live for the playoffs, and they got that taken away from them. It’s like having a season-ending injury right before the playoffs start.”

From the players to the front office to the ownership group, the Stingrays were geared for a deep run in the Kelly Cup playoffs.

“I’ve seen a lot of Stingrays teams over the years, and you could tell from the first month of the season that this was a team that had a chance to compete for a championship,” said Concannon, who was a teammate of Seitz’s on that 1997 Kelly Cup championship team.

Bergin won championships with Pensacola in the Southern Professional Hockey League and had been to the Kelly Cup finals in 2017 as an assistant coach with the Stingrays. He knew what a championship team looked like, and this was one of them.

No. 1 Gamecocks, Dawn Staley left wondering what might have been after coronavirus ends season

“This was a focused team that desperately wanted to win,” Bergin said. “They earned every piece of success the got. You mix in the caliber of players we had, the approach they took and their work ethic, and you have a team that was ready to make a run at a championship.”

Bergin, however, understands that it takes more than just talent to win a championship. You have to be healthy. You have to have a little luck, good goaltending and the ability to overcome the adversity that every team faces in the postseason.

“If winning championships was easy, everyone would do it,” Bergin said.

Having a complete roster is crucial in making a long run in the playoffs. Being healthy and getting players back from the American Hockey League is often the difference between getting bounced out of the opening round of the postseason and playing until late May and early June.

In 2018, when the Stingrays set a franchise record with 48 regular-season wins and 104 points, they were without several key players in the playoffs. Steven Whitney, the team’s second leading scorer, defenseman Frank Simonelli, Andrew Cherniwchan, Kris Bindulis and Hampus Gustafsson did not play a single game against Orlando, which swept the opening-round series in four games. Had those players been in the lineup in 2018, Bergin is confident the Stingrays would have advanced deep into the playoffs.

“We ran into some injuries, guys got called up and didn’t come back, and that depleted our lineup,” Bergin said. “I think if we would have our guys back and healthy, we would have gotten past Orlando and then made run at it.”

This year, forwards Mark Cooper, Branden Troock and defensemen Tom Parisi, Tommy Hughes and Eddie Wittchow were up in the AHL when the season was cancelled. Dan DeSalvo, who was averaging a point a game in the regular season, had just returned to the Lowcountry after a stint with the AHL’s Chicago Wolves.

Bergin expected Cooper, Troock, Parisi and Hughes to be back for the opening round of the playoffs in mid-April. Wittchow was probably going to remain in the AHL with Hershey. There was also a chance that Whitney, who played five games for the Stingrays and had five goals, and Chris McCarthy, a proven scorer in the ECHL, would have been on the Stingrays' playoff roster.

“You never know what’s going to happen with guys that are called up or what college guys are going to sign in the ECHL or AHL,” Bergin said. “I think most of our guys were going to come back down and be here. Wittchow, to me, was the least likely. But if things go our way and we get a Steven Whitney or a Chris McCarthy as well, those guys are elite players at our level and can give a jolt to our lineup. Those guys can change your lineup.”

That doesn’t mean the Stingrays would have had a completely full lineup. Max Novak, who was tied for the team lead in points, had a broken thumb but was expected to be back on the ice by the opening round of the playoffs. Matthew Weis, who had 41 points in 39 games this year, was out for the playoffs with a lower body injury.

“When you get deep in the playoffs, teams are not going to be at full strength,” Bergin said. “There are always obstacles to overcome the deeper you get into the playoffs.”

If history is any indication, just because the Stingrays were having an historic regular season doesn’t guarantee that the club would have had success in the playoffs. Of the top-six teams in ECHL history – the clubs that had the highest winning percentage and most points in the standings – the 2008 Cincinnati Cyclones and the 2006 Alaska Aces went on the raise the Kelly Cup at the end of the season. The best team in ECHL history, the 2002 Louisiana IceGators, which won a league-record 56 games, were knocked out of the playoffs in the quarterfinals.

“The playoffs are such a different animal,” said Cherniwchan, the Stingrays’ captain this season. “There are lot of things that kind of have to fall your way to win a championship.”

The Stingrays would have most likely faced Florida, which was having just as good a season as South Carolina, and Newfoundland, the defending ECHL champs, to get to the finals. Still, the Stingrays were confident that no matter who they faced, with a full complement of players in the lineup, there were few teams that would have been able to beat them four times in a seven-game series.

“We hadn’t seen every team in the league, but I doubt there was one out there that could win four out of seven games against us when we had everybody,” DeSalvo said. “This team was special.”

That doesn’t mean the Stingrays are interested in being given the Kelly Cup at this point. They didn’t earn it on the ice, so they don’t want it.

“I wouldn’t like it if they did that,” said Stingrays goalie Parker Milner, who played in the 2017 Kelly Cup finals against Colorado. “You just can’t give out the Kelly Cup. That’s something you earn. It’s not something you just give out.”

While Bergin and the Stingrays had no interest in raising a Kelly Cup they didn’t earn, they were more receptive to the idea of claiming the league’s Brabham Cup, given to the team with the best regular-season record. Even with 10 games left, Bergin feels there was still a big enough sample size to claim at least one trophy.

When the season ended, the Stingrays and Florida Everblades were tied with 92 points, but the Stingrays would have been the top seed in the playoffs with one more regulation victory.

“I’d like to see this team get some recognition for the season they had,” Bergin said. “I think everyone had the same opportunity. We had the highest winning percentage, we won the most games. If the league decides that we are the regular-season champions, I think the guys would fully embrace that. If not, and they don’t want to give anything out, I’d understand that as well.”

ECHL commissioner Ryan Crelin said the league hopes to address the issue in the coming days.

“It’s been such a chaotic week that we haven’t even begun to discuss the Brabham Cup - it’s pretty far down on the priority list right now,” Crelin said. “I know we’ll hand out some regular-season player and coaching awards, and I think the Brabham Cup will be discussed with the board of governors at some point in the very near future.”

Whether or not South Carolina is ever recognized by the league for what they accomplished during the year, it was a special season on the ice for the Stingrays.