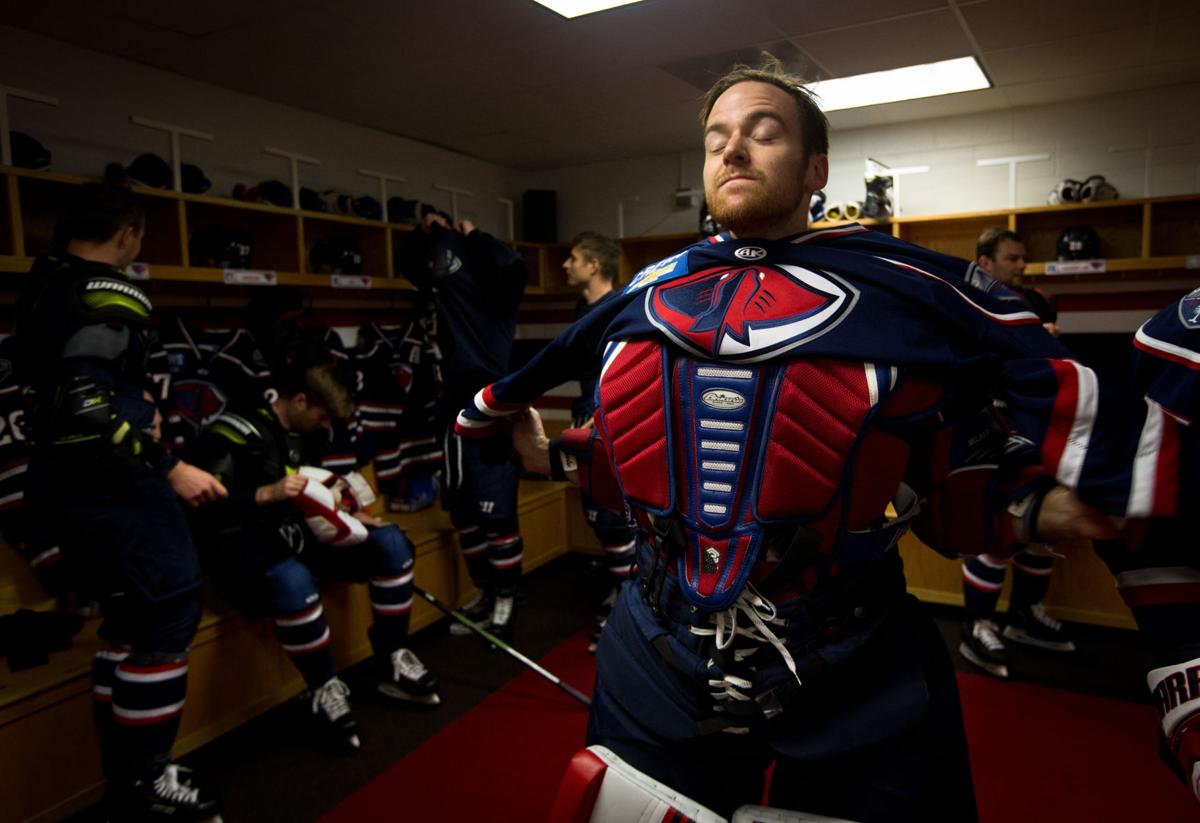 South Carolina Stingrays goalie Parker Milner puts on his gear in the locker room before a game at the North Charleston Coliseum. Andrew Whitaker/Staff 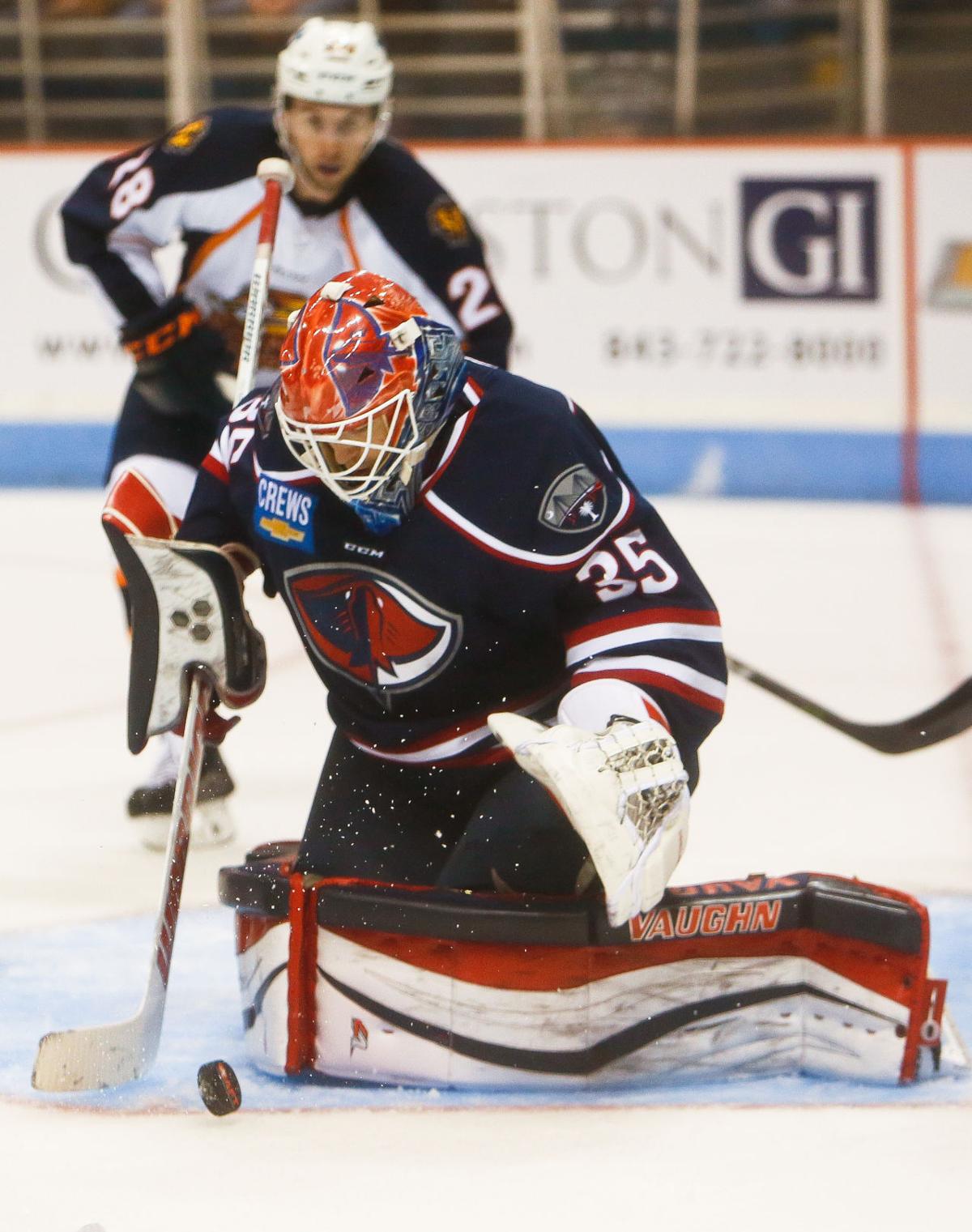 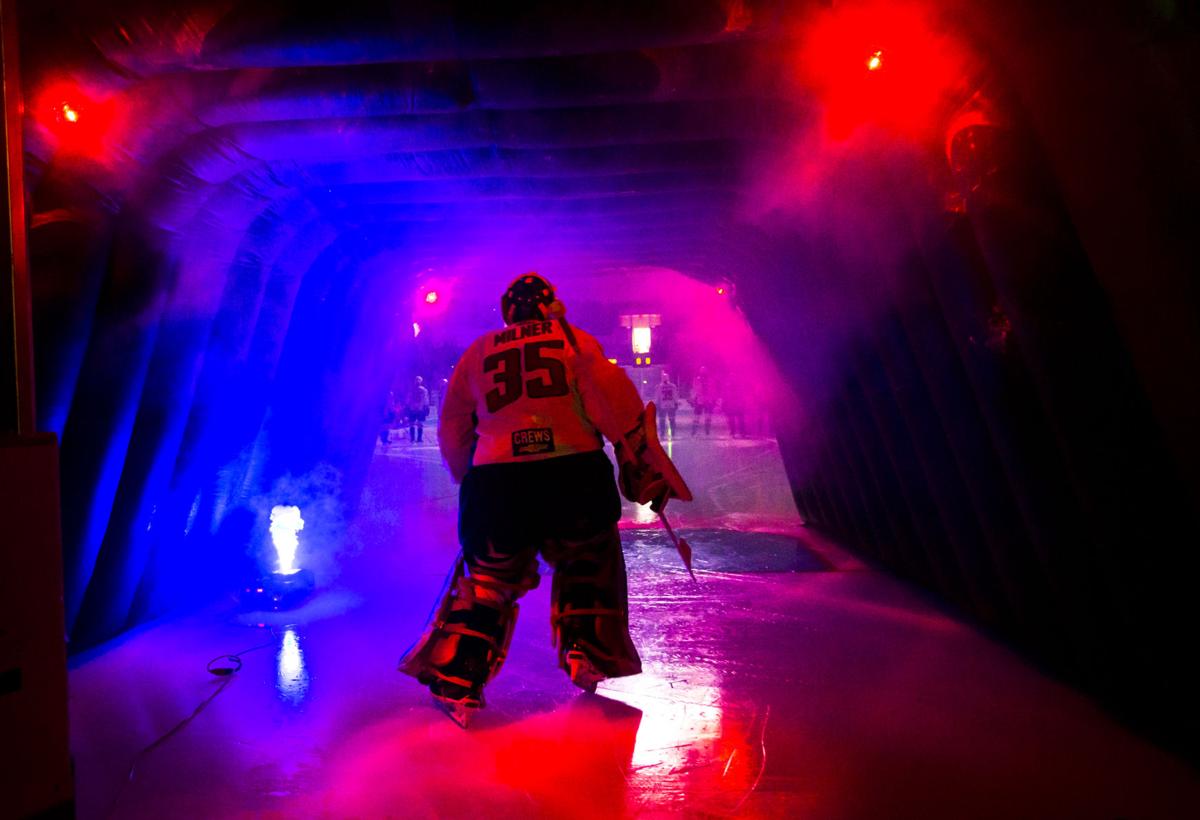 South Carolina Stingrays goalie Parker Milner is 11-0-3 this season with a 1.86 goals against average and a .927 save percentage. Andrew Whitaker/Staff

It’s the kind of road trip that just about every hockey team in the ECHL faces at least once during the season.

The day after Thanksgiving, the South Carolina Stingrays boarded their team bus for a six-hour drive to Orlando, Fla., for a pair of games against the Solar Bears. After splitting two games, the second an overtime loss, the Stingrays piled onto the bus for a seven-hour overnight ride to Duluth, Ga., for a game the next night against the Atlanta Gladiators. After beating the Gladiators, the team was back on the road for a nine-hour trek to Estero, Fla., for two huge games against South Division rival Florida.

After losing the second game in overtime to the Everblades, the Stingrays returned to the Lowcountry where they had just one day off before hosting the Solar Bears at the North Charleston Coliseum.

In all, the Stingrays traveled nearly 2,000 miles and spent more than 30 hours on the bus in less than a week.

In his seventh professional season, Milner, 29, has accepted the fact that travel in the ECHL isn’t always going to be glamorous. It means long bus rides, most of the overnight variety, and playing in multiple cities over multiple days.

It’s something that used to bother the former Boston College star about playing in the ECHL. This year he’s trying to take such things in stride, which might be one reason the former ECHL Goalie of the Year is having his best season as a professional.

“I’ve kind of tried to go with the flow a little bit more this year,” said Milner, who leads the ECHL with five shutouts this season. “That’s not always been part of my nature. I’ve been trying to be more positive and be a good teammate and not complain so much about things I can’t control.”

Said Stingrays head coach Steve Bergin: “Parker is taking the day in and day out stuff in stride. There are tough days, tough travel, but nothing seems to faze him. If there are issues with travel or something isn’t the way he wants, he just goes with it. Our team has kind of taken that on. We talk about things being contagious in a good way or bad way. He’s one of those guys that sets the tone.”

Two years ago, Milner set career highs in wins (28) and save percentage (.929) in leading the Stingrays to a franchise-record 48 regular-season victories. He was named the league’s goalie of the year. His numbers might be even more impressive this season. Through 14 appearances, Milner is 11-0-3 with a .927 save percentage and 1.86 goals against average.

“The is the best that I’ve seen Parker play in the regular season,” Bergin said. “The only time I’ve seen him play in the same stratosphere was when we went to the finals my first season here (2016-17) and that’s the most focused I’ve ever seen any hockey player.”

Milner said it was the lessons he learned last year, when he went 19-17-3, that forced him to reexamine his approach to this season.

“Last year took a toll on me in some ways,” Milner said. “When you have a high standard for yourself and you are not playing at that level, it's frustrating. I kind of let it get the best of me at times.

"My first two years here were super successful and when you’re not getting those results sometimes frustration sets in. I don’t think I was overly negative last year, but there was definitely a lot of frustration and I wanted to come in with the mindset that I was going to lead by example."

Milner is a major reason the Stingrays are off to their best start in franchise history and leading the ECHL’s South Division by eight points. South Carolina hopes to continue that success this weekend with games Friday and Saturday against Florida at the North Charleston Coliseum.

“Parker has been unbelievable,” said Stingrays team captain Andrew Cherniwchan. “When he’s playing at this level, it gives everyone in our locker room that much more confidence. If you make a mistake out there, you know he’s got your back.”

Milner was called up to the Hershey Bears of the American Hockey League last week and made 18 saves in a 3-0 win over Lehigh Valley to record his first shutout at the AHL level.

“You never know when you go up if you are going to play, and normally it doesn’t happen very often for a call-up goalie,” Milner said. “It was good to get that opportunity and perform like I did. I tried to keep things simple. That’s really the key up in the American League.”

Milner said he can’t take all the credit for his start this season.

“The guys are doing a great job in front of me,” Milner said. “This is a super close group of guys. I know that’s kind of cliché but it’s so fun to come to the rink every day. These guys are awesome and they are making us want to win for each other.”

Milner has been on another team that got off to a similarly strong start. The Missouri Mavericks won 52 games during the 2015-16 season and had the best record in the ECHL’s Western Conference only to lose in the second round of the playoffs.

“We got way up in the standings and then I think we got a little complacent,” Milner said. “That’s why January and February will be really important for us.”

Milner’s passion off the ice is food and he continues to write a blog about his dining experiences in the area. His latest find in Charleston is the Chubby Fish — a seafood restaurant located on Coming Street.

“They have great small seafood dishes and their crab tagliatelle is insanely good,” Milner said.