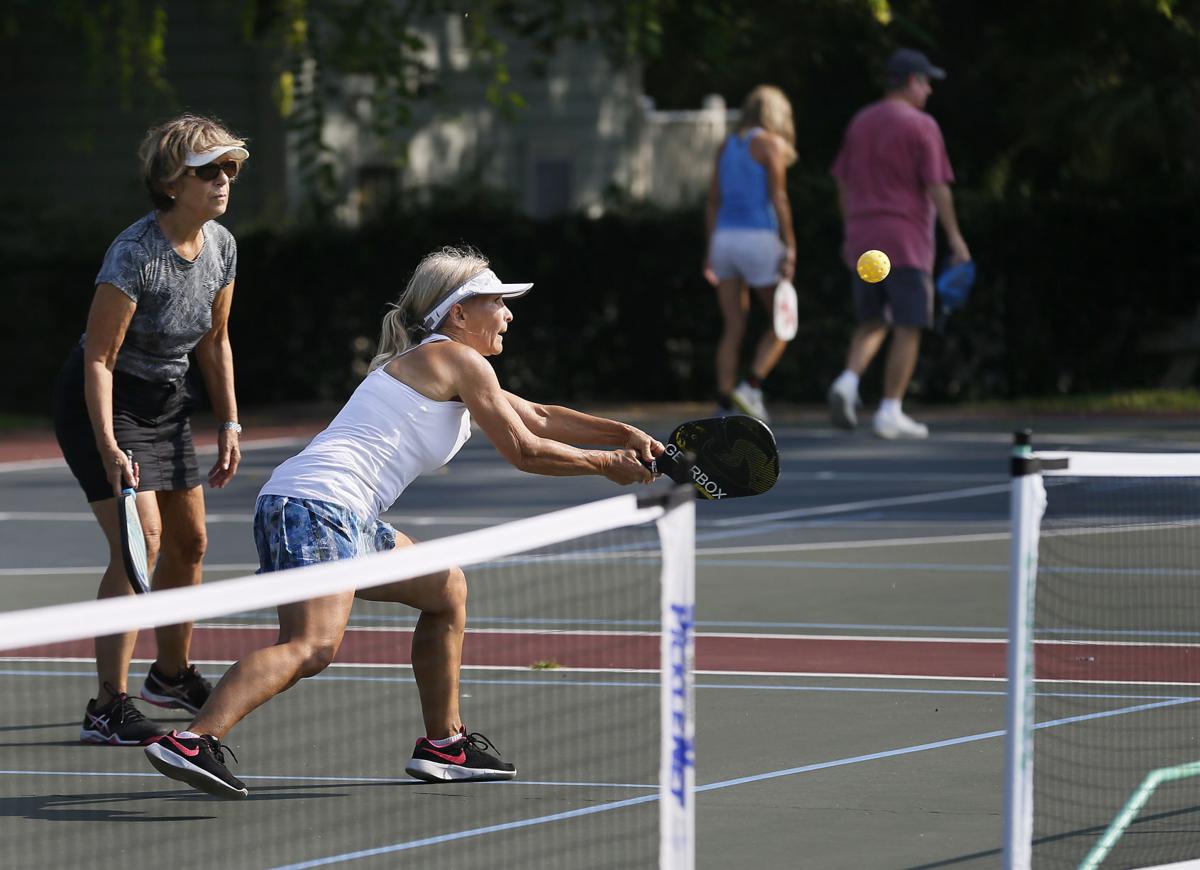 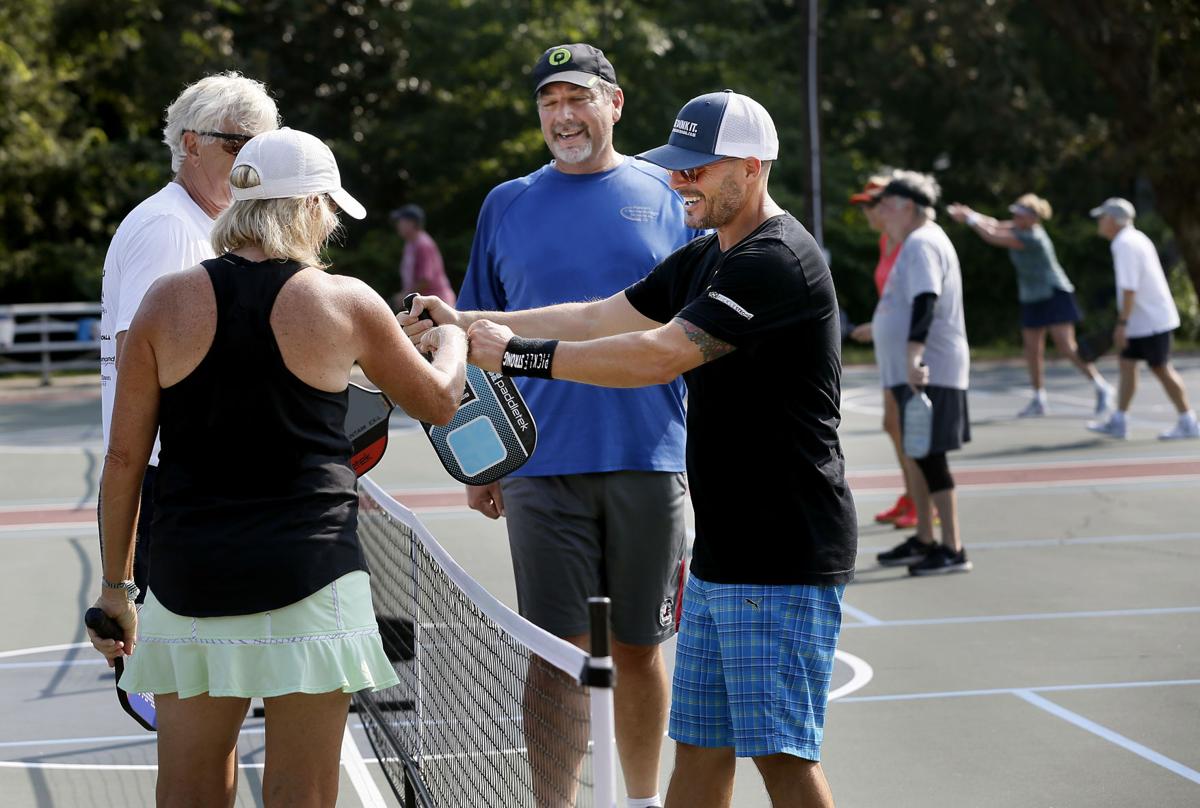 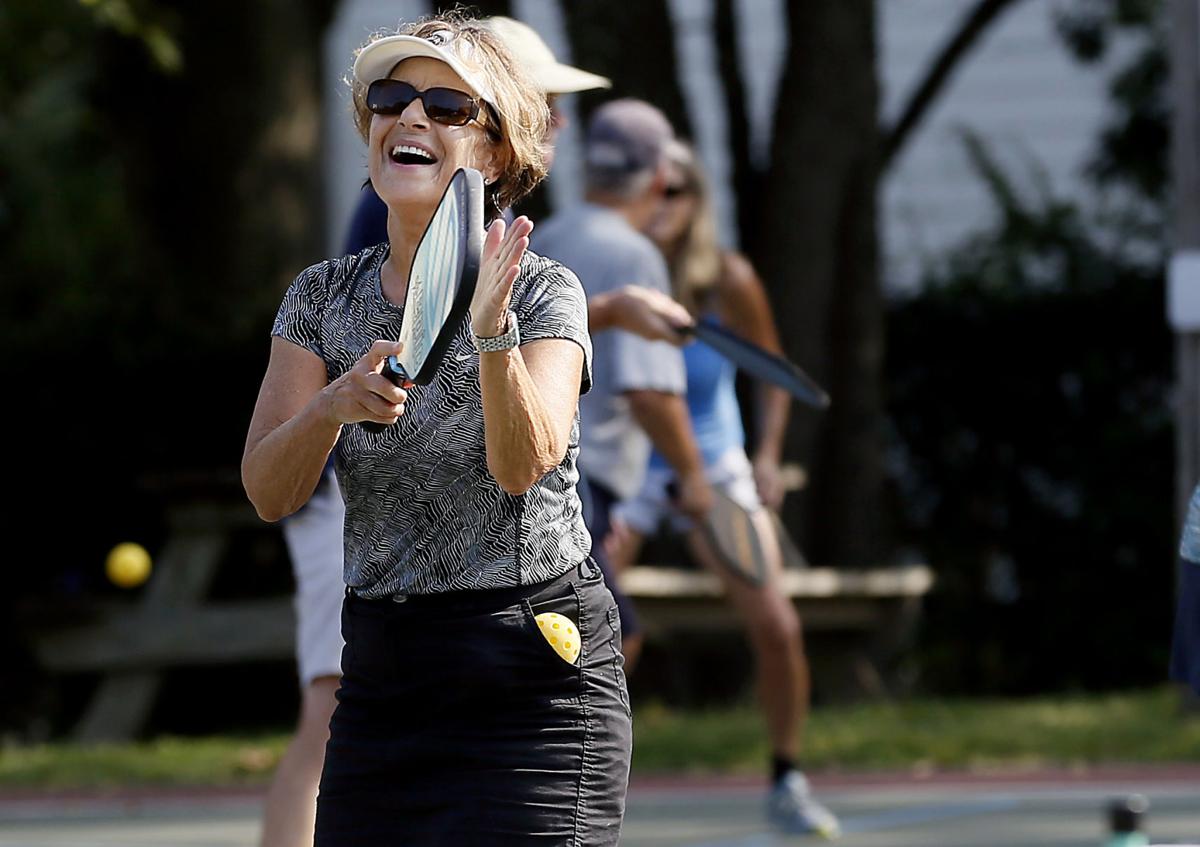 MOUNT PLEASANT — As most of the group said their farewells and left the basketball courts off Royall Road, Rich Williams couldn’t resist sticking around for one more game of two-on-two.

But the Columbia resident wasn’t shooting hoops; he was playing pickleball.

His job as a project manager for a construction company keeps him on the road all the time. But Williams never forgets to bring his odd-shaped paddle.

Dripping sweat from the intense match, he said there’s a community of pickleball players everywhere he travels, with the local stop being one of his favorites.

“The sport is exploding,” Williams said. “Every year, more people are gravitating toward it.”

The facts back him up. The USA Pickleball Association estimates there are roughly 3 million players, a huge increase since the USAPA was founded in 2005.

Pickleball combines elements of badminton, tennis and table tennis. Two or four players use solid paddles to hit a perforated ball, similar to a Wiffle Ball, over a net. A pickleball court would be about half the size of a regulation tennis court.

The growth of the sport in recent years has shown up in Charleston, so much so that players are asking Mount Pleasant to provide official pickleball courts.

Charleston County alone has nearly 500 players, said Mary Kennerty, a professional coach who was recently certified to teach the sport.

Kennerty keeps a mailing list to update players on places where they can play. Pretty much any public basketball or tennis court, ranging from downtown Charleston to Hanahan, is a good option.

Of the 500 players on the list, about 35 of them meet at the Royall Road location every week.

“It’s a leisure sport that provides a good workout, and I think that’s why people are drawn to it so much,” Kennerty said.

The basketball and tennis courts work well, but it would be more ideal if Mount Pleasant and other local municipalities invested in official pickleball courts. That way, each sport can have its own facilities without infringing on others, Kennerty said.

The group is crossing their fingers that a plan announced two years ago will come to fruition. Mount Pleasant is looking to bring a large park to Rifle Range Road that would include about a dozen pickleball courts. There hasn’t been any recent movement on that.

However, Kennerty said a separate project that will bring four pickleball courts to Mount Pleasant will likely reach completion by next summer.

That’s good news for local players, said Scott Manetta, the creator of pickleSTRONG. A member of the local group, Manetta launched the clothing brand after falling in love with the sport less than two years ago.

He said once he got involved, he wanted the world to know that pickleball knows no age or particular demographics.

We play with everyone from 20 to 90,” he said. “I wanted something to reflect what pickleball players are. We’re strong, passionate and competitive. And it takes dedication and skill just like any other sport.”

Kennerty will begin conducting clinics in October through the Mount Pleasant Recreation Department. For information, call 843-442-7430.

Pickleball players enjoy game that incorporates players of all ages to courts throughout the Lowcounrty.