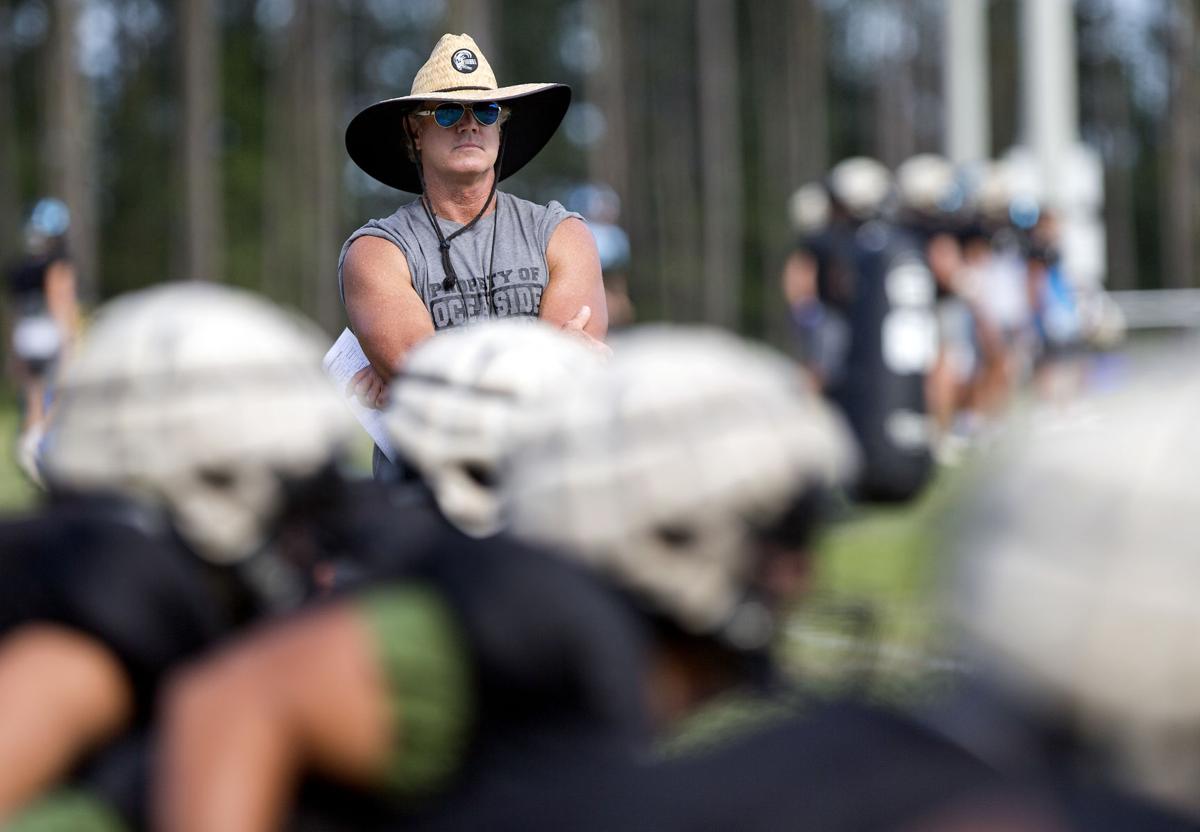 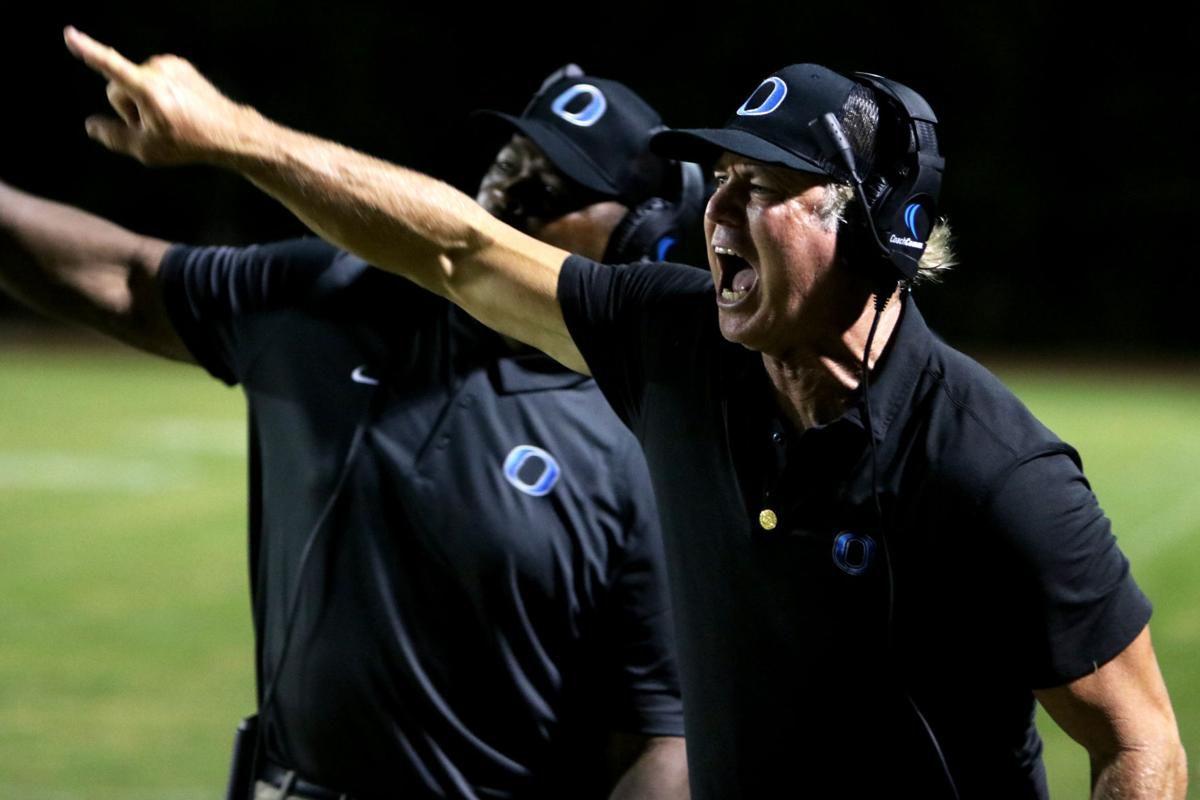 He’d sent out a group text and email asking players to meet him at the school. With public officials asking to limit the number of group gatherings because of the coronavirus pandemic, Grier didn’t want to hold the meeting indoors. He wanted there to be plenty of social distancing.

Grier, who also has served as the school’s athletic director for the past two years, had an announcement and he wanted to do it in person. He felt like his players deserved to hear the news from his own lips.

More than two dozen players showed up at the school and when Grier started to speak, no words came out.

“I was speechless, I didn’t know what to say or how to tell them and that’s not normal for me,” Grier said. “People who know me know that I’m rarely at a loss for words.”

Grier told the players who helped build Oceanside Collegiate from a football laughing stock to a Class AA power in just three years that he was leaving the Lowcountry to take over as head football coach at Providence Day, an elite private school in his hometown of Charlotte.

“To look those boys in the eye and tell them I was leaving was the toughest thing I’ve ever done professionally or coaching,” Grier said. “I wasn’t sure I was going to be able to get through it without breaking down.”

As the gathering broke up, the players got together and recited the seven core values that Grier has instilled in his program since arriving in Mount Pleasant. The values range from showing up on time, to respecting your teammates and opponents to never giving up.

“Those are the values we’ve built our program around and the kids recite them after a practice or a workout,” Grier said. “When they started to recite those values, it took everything I had in me to hold it together emotionally. It just shows you the commitment those kids had and their buy-in into what we were doing."

Grier, 52, said he wasn’t looking to leave Charleston. Grier came to OCA from Davidson Day, a program he started from scratch just a 30-minute drive north of Charlotte. The team went 64-9 in five seasons and won four state championships. What he found in Mount Pleasant was a program that didn't have a building or a stadium to play in and that had gone 0-8 the previous year, losing games by an average of 35 points.

This past season, the Landsharks won every game in the regular season, advancing to the Class AA Lower State final.

“When I moved down here I thought this was going to be it, I was going to retire here,” Grier said. “I mean, who leaves Charleston? Why would you want to leave this place? I wasn’t looking for a job anywhere. It was very, very hard for me to walk away from this. I was very, very happy at Oceanside.”

Grier was renting a home in Toler’s Cove and had started house hunting in Mount Pleasant, looking for something more permanent, when Providence Day officials reached out to him a few weeks ago. Providence Day head coach Adam Hastings had left the school and taken a job over the South Carolina state line at Indian Land High School.

“I remember beating them in the playoffs on our way to winning a state championship and that kind of put Davidson Day on the map,” Grier said.

The turning point for Grier came when Providence Day officials told him his 11-month-old son, Hank, could attend the school.

“Honestly, that was the biggest part of my decision to leave,” Grier said. “There have been a couple of other jobs in the Charlotte area where people thought I’d go and I wasn’t interested. We couldn’t look at it for this year or next year, but what does it look like in five, 10 years from now. Where’s Hank going to school?

“I was an empty nester when I moved here. I wasn’t planning on having any more kids. But Hank came along and he’s been a blessing. When you are a parent you do what’s in the best interest of your kid. Now, I’m making a really hard choice, but one that I think is best for my son.”

Returning to Charlotte will also bring Grier closer to his extended family, including his son, Will, who is a backup quarterback for the NFL’s Charlotte Panthers. Chad has two young granddaughters Eloise (3) and Adeline (2 months) and now hopes that Hank will be able to grow up alongside them.

“They are going to be Hank’s sisters,” Grier said. “I grew up around my entire family. Family is so important to me. I really want Hank to experience the same thing I did and my three sons did.”

The Landsharks have won six state titles with Grier serving as athletic director and played in five more championship games. But Grier and the Oceanside athletic department have had their share of battles with the South Carolina High School League. OCA had to forfeit four games and pay a fine for using ineligible players during the football season. A recent rules change by the high school league would make it harder for students to transfer to OCA.

Grier said none of that had anything to do with his decision to leave.

“It had no impact at all,” Grier said. “That stuff is just noise. I think people know where I stand about some of the things that have gone on with the high school league, but they didn’t run me off. No way. I don’t quit.”

Oceanside principal Brenda Corley said she was sad to see Grier leave, but understands his decision to return to Charlotte.

Corley said she hopes to start interviewing candidates as soon as Monday and to have an announcement late next week.

“This isn’t the job opening it was three years ago and I’ve gotten a tremendous response already,” Corley said. “I feel good about getting the pick of the litter from not only South Carolina but across the Southeast. We are looking for someone that has an innovative, creative, energetic passion for education and kids.”