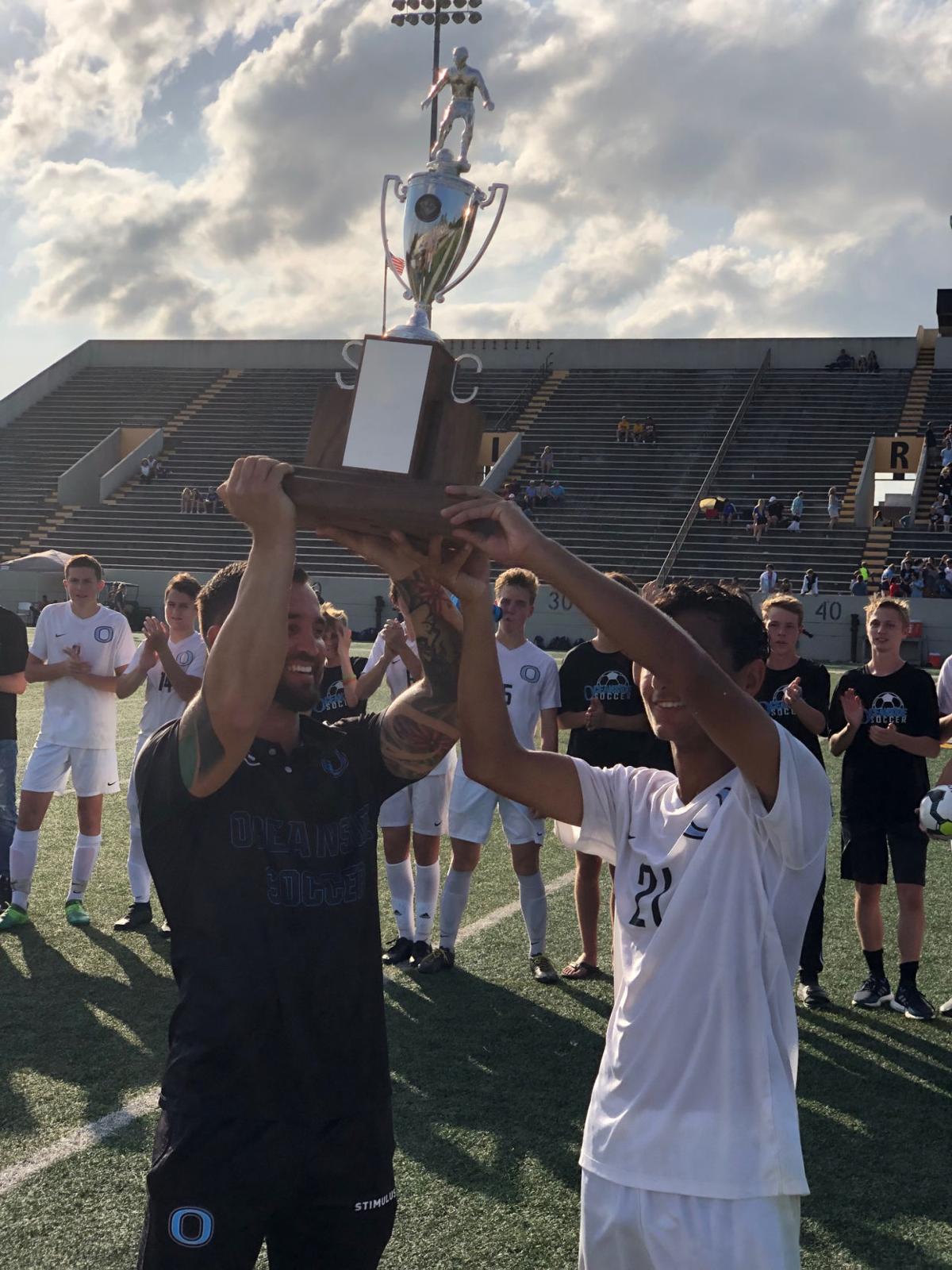 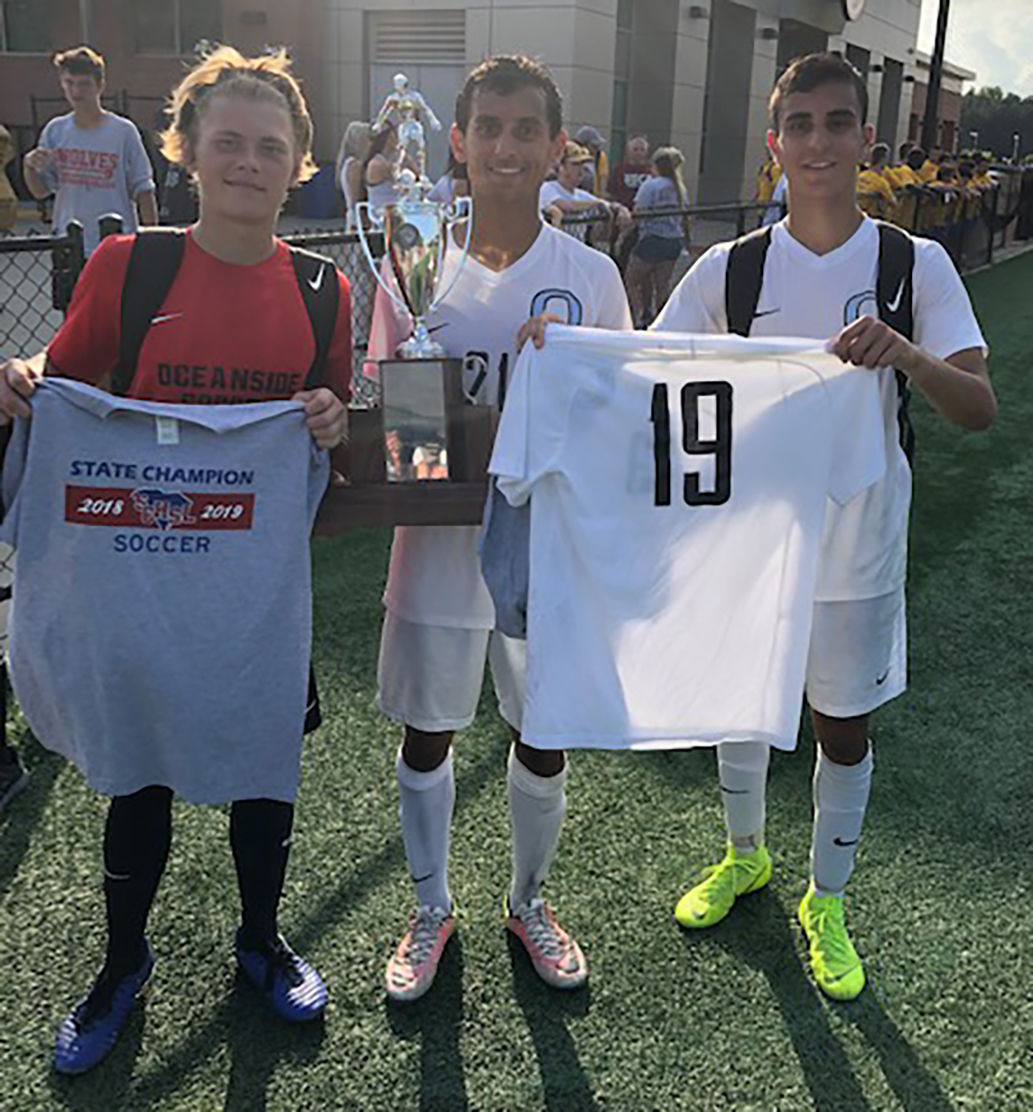 Oceanside Collegiate goalkeeper Hannon Templeton (left) along with brothers Stephen and Philip Siegwald hold the No. 19 jersey of former teammate Sergio Gonzalez, who died in January 2018. 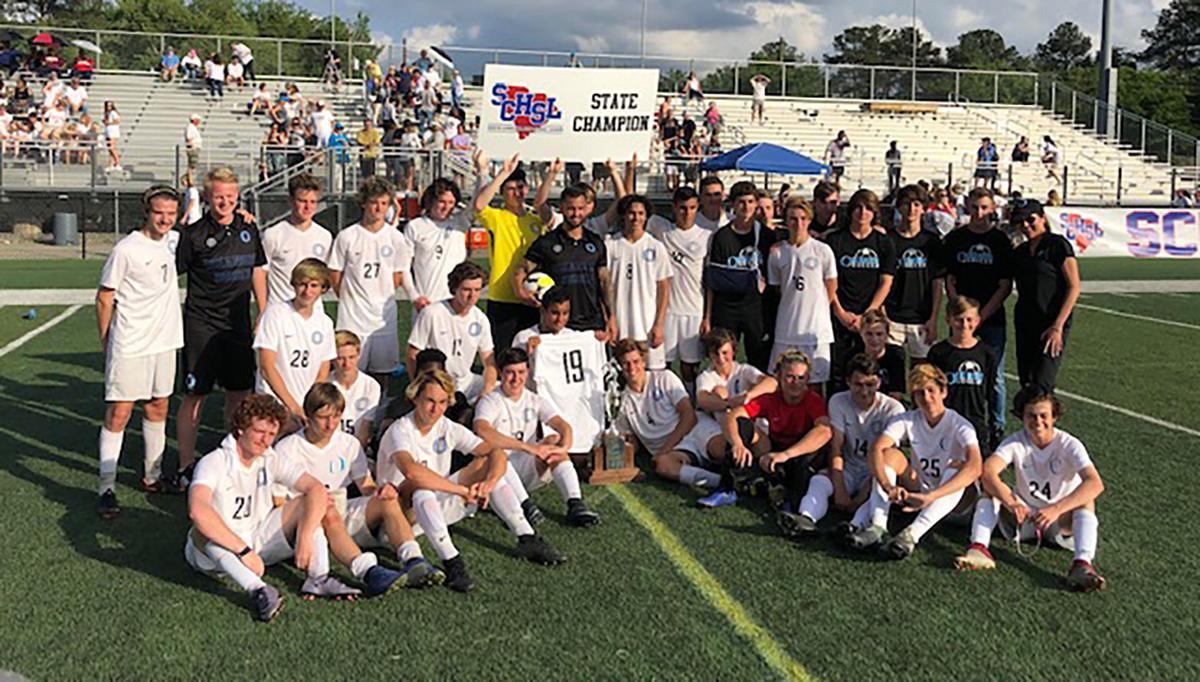 Oceanside Collegiate goalkeeper Hannon Templeton (left) along with brothers Stephen and Philip Siegwald hold the No. 19 jersey of former teammate Sergio Gonzalez, who died in January 2018.

As the final seconds ticked off the clock in the Class AA boys soccer state championship game, Oceanside Collegiate senior Philip Siegwald immediately began to think about the one teammate who wasn’t on the field to celebrate the Landsharks’ 2-0 win over Southside Christian.

It was the school’s first title in their first year of playoff eligibility, capping a 25-2-1 season. Siegwald, who even scored a goal in the victory, was happy to celebrate with his teammates. First, however, Siegwald ran to the sideline and grabbed a No. 19 jersey, hoisting it high above his head in tribute to former teammate Sergio Gonzalez, who died in January 2018.

“He’s not here on the field, but he’s here with us,” Siegwald said. “He would be very proud of this. This is special, to do it in our first year. Nobody thought we had a chance, but this is what we have been working on for three years. To finish today, with a state championship, made all of the work worth it.”

“The boys worked really hard, and there was no way this was going to end any other way,” coach Andre Berenzon said. “These guys would not be denied. They’ve been waiting for this opportunity for three years. It was our year.”

The Landsharks got on the board in the 18th minute on a goal by Tyler Boselowitz, who perfectly angled a shot from the right side to the left corner of the goal.

Despite dominating ball possession and getting off several clear shots on goal, the Landsharks clung to a 1-0 lead until late in the contest when Siegwald delivered the clincher in the 75th minute.

“We were winning every 50-50 ball and keeping the pressure on them, so I felt like we had another goal coming at some point,” Berenzon said. “We expected this to be a tough game, but again, we did what we supposed to do. Everyone gave 100 percent, from the back to the front. All I asked was 100 percent, and they answered the call.”

The girls were first on the turf, kicking off at 2 p.m. on a warm, humid day. A goal by freshman Ellie Smith gave the Landsharks a 1-0 lead in the 36th minute of the first half.

However, it wasn’t long into the second half that Southside Christian, which lost to Academic Magnet in the state final last season, took control of the contest.

A goal in the seventh minute of the second half tied the game at 1. That score was the first of five tallies over an 18-minute span that pushed to advantage to 5-1. A late goal provided the final score.

Oceanside was able to get a few solid scoring opportunities over the second half, hitting the crossbar twice, but could not find the back of the net.

“We play a lot of underclassmen, and this was our first time in this environment, so maybe it got to us a little bit,” Oceanside coach Mark Meyer said. “We had some chances. We played really hard. We’ll learn from this experience and we will get better. We will handle it better the next time.”

Mary Kate Wyer and Ashleigh Keiser each scored twice for the Sabres, while Rachel Castellani and Samantha Speaks added a goal each. Keiser also recorded an assist.

Oceanside Collegiate, which had only two seniors on the roster, finished with a 14-4 record.