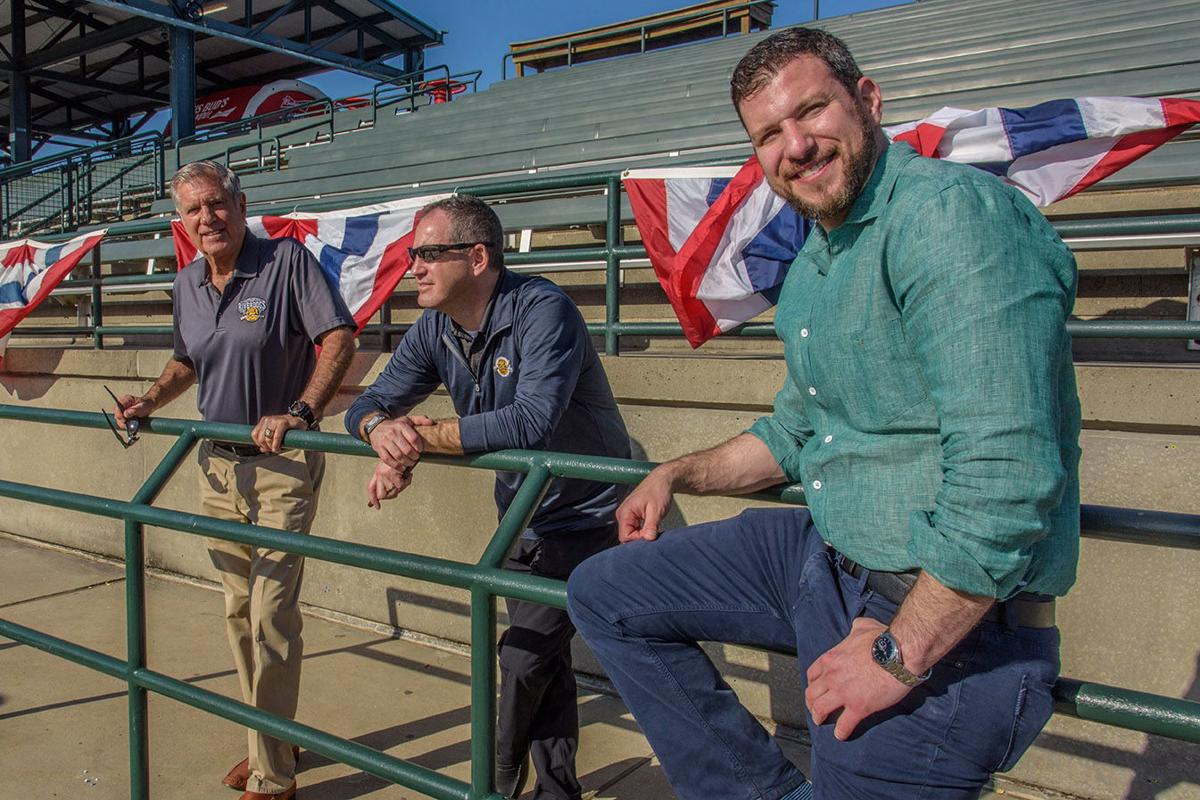 Marvin Goldklang (from left) and his sons, Jeff and Michael, are part owners of the Charleston RiverDogs and New York Yankees. Provided photo 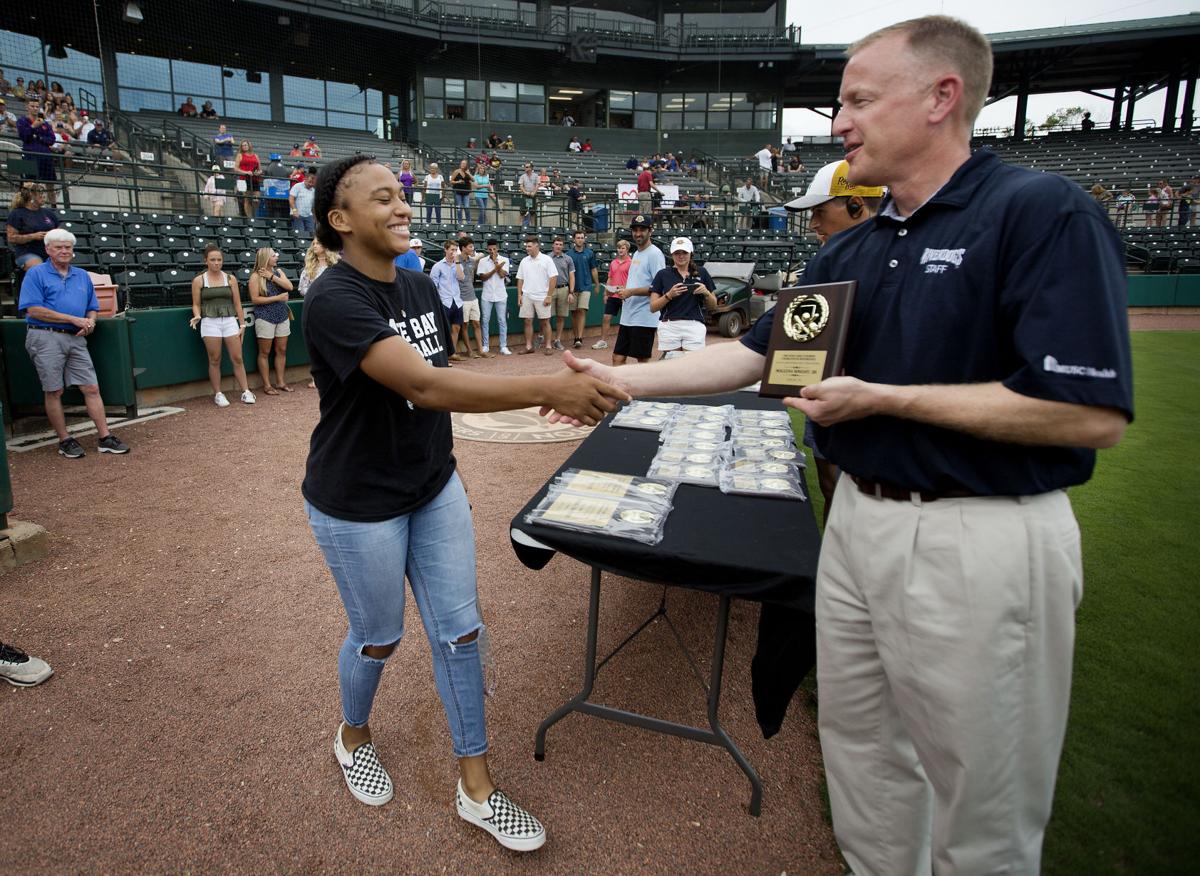 Charleston RiveDogs president Dave Echols says the team should not be in jeopardy of being eliminated if and when the MLB cuts minor league teams from the farm system. Here, he congratulates The Post and Courier's All-Lowcountry baseball and softball players on July 9, 2019. Grace Beahm Alford/Staff 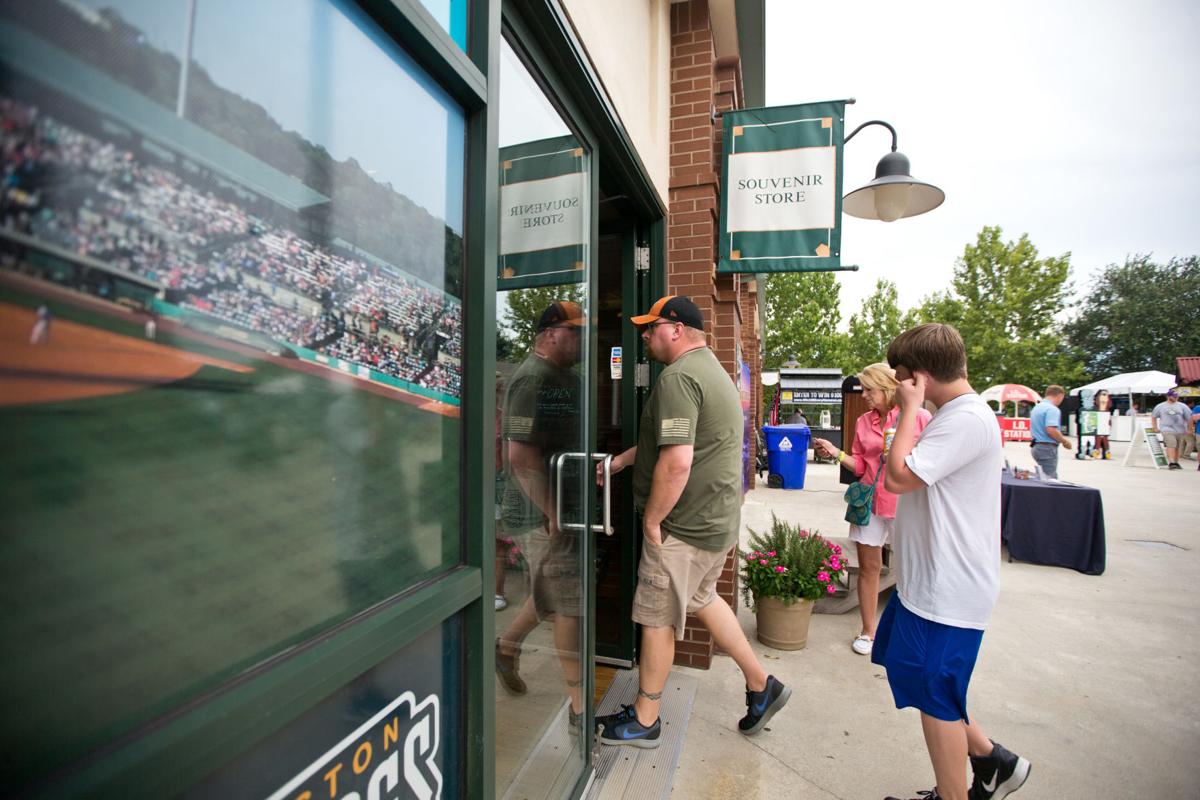 Fans enter the Charleston RiverDogs' Souvenir Store at Riley Park. The RiverDogs finished in the top 25 in all of minor league baseball in merchandise sales for 2018. File/Staff 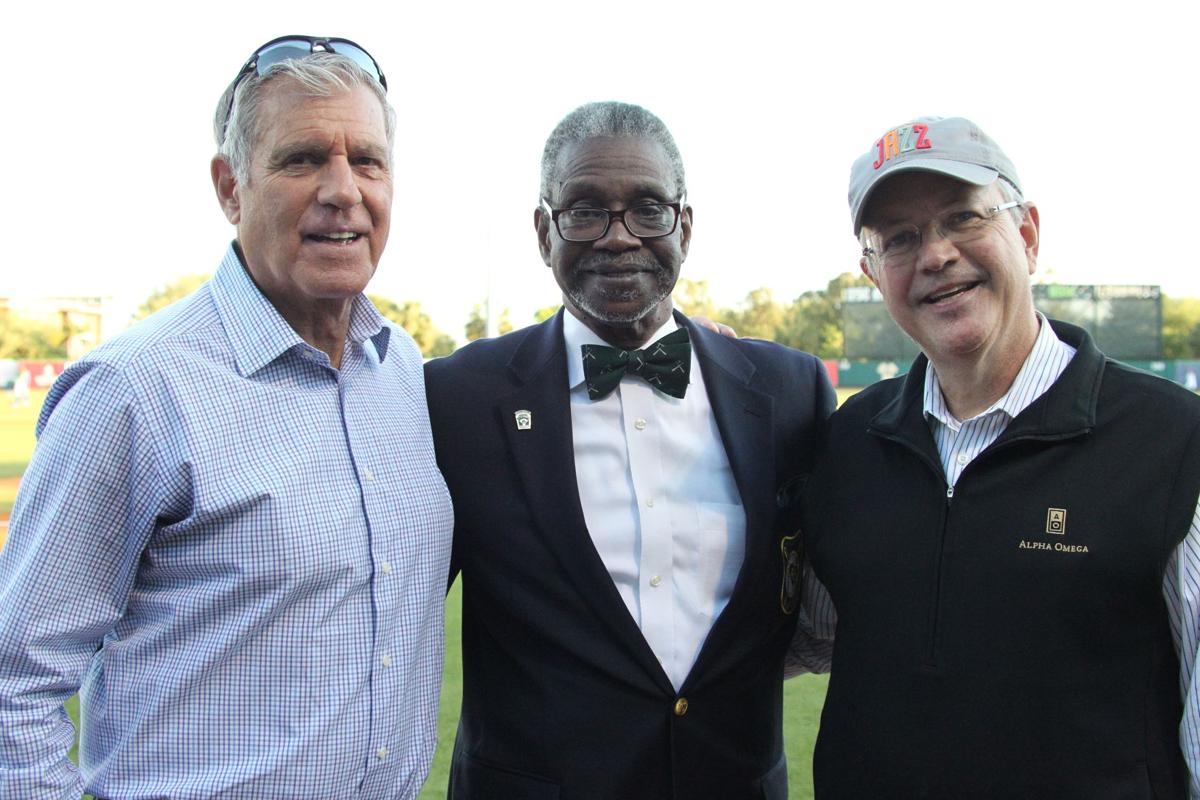 Marvin Goldklang, left, is a part owner of the Charleston RiverDogs. Here, he stands with Gus Holt and Charleston Mayor John Tecklenburg on Opening Day in 2019. Provided/RiverDogs

If the New York Yankees are forced to scrap one of their Class A minor league teams, two lawmakers from the Empire State have asked the team to eliminate the Charleston RiverDogs and retain their Staten Island club.

U.S. Representative Max Rose, a Democrat from New York, and Republican James Oddo, the Borough President of Staten Island, crafted a May 11 letter to Yankee ownership, asking that the team maintain its “mutually beneficial” relationship with the region.

But the request is all for naught, according to RiverDogs’ ownership. The team says individual franchises won’t have a final say on which teams are cut or kept in a proposed plan to eliminate 42 clubs from the minor leagues.

"These are decisions that are being made or overseen by the Commissioner's Office, not the minor leagues or even the Major League teams themselves," said Marvin Goldklang, a part owner of the RiverDogs.

How we got here

In October, a proposal drafted by Major League Baseball leaked to the masses, revealing the organization’s plan to cut 42 of the 160 minor league clubs.

The proposal was part of negotiations between the MLB and Minor League Baseball as the two parties look to ink a new Professional Baseball Agreement before the current one expires after the 2020 season.

The MLB has been met with nationwide criticism over the proposal. A political group, which includes Charleston Mayor John Tecklenberg, was formed to show unity across minor league communities. And members of the U.S. Congress created a task force to save Minor League Baseball.

Sapakoff: A former player example of why Furman baseball mattered

In the aftermath of the news, the MLB expressed frustrations over the leak, and said the proposal was misunderstood, adding that “it is not Major League Baseball’s goal to eliminate any club.”

Still, news broke last month that the MiLB will agree to the cuts, a move that will allow player salaries to increase and ballpark facilities to be updated.

The Staten Island Yankees are one of the teams listed in the proposal. Neither the RiverDogs, nor any of South Carolina’s other four minor league clubs, made the list.

In their May 11 letter, Rose and Oddo wrote that the Staten Island club provides an economic boost and family atmosphere to the region.

“It is our understanding that the Yankees will need to decide between keeping the Staten Island Yankees or the Charleston RiverDogs as its low A affiliate,” the two lawmakers wrote. “As such, we strongly urge you to choose Staten Island as one of the four minor teams that you grant a Player Development Contracts to.”

RiverDogs President Dave Echols said he expects Charleston to keep its team, since the MLB proposal was looking to address the geographical landscape of the minor leagues.

South Carolina and bordering states house several teams, so there would be no rhyme or reason to eliminating the Holy City if the goal is to make travel and expenses more accommodating.

“We’re all trying to avoid the chopping block,” he said. “It’s just one of those things where we’re not quite sure where all of this going, so everyone is trying to protect their teams.”

Questions sent to the Yankees were not returned.

While he empathizes with the lawmakers’ concerns, Goldklang, the principal member of the RiverDogs’ ownership group and a part owner of the Yankees, says the decision won’t be left up to the Yankees.

Goldklang's sons, Jeff and Michael, are also part of the RiverDogs' ownership, along with longtime marketing guru Mike Veeck and comic actor Bill Murray, among others.

The MLB proposal targets the farm system’s Class A Short Season leagues. Teams in those leagues only play about 70 games a season, roughly half the number of games played in the full Class A conference, where the RiverDogs reside.

The RiverDogs' Vasectomy Night: An oral history of the zaniest sports promotion

He added that these decisions are being overseen by the MLB Commissioner’s Office, not the 30 teams that make up the sport.

“The important point is that it's not a situation in which minor league teams are competing against one another and soliciting individual Major League teams for affiliations,” he said.

Goldklang has faith that the RiverDogs will stay in Charleston. But he isn’t as certain on whether or not they’ll remain a Yankee affiliate.

If cuts are made, they will come with other caveats, including changes to which franchises oversee which teams. That means the RiverDogs’ 16-year affiliation with The Bronx could come to an end.

“We are confident that we will continue to play full season affiliated baseball,” he said. “Although our specific affiliation, along with that of many if not most minor league clubs, remains subject to further decisions by Major League Baseball.”

As teams are eliminated, the sport will find itself in a situation where it will need to even out the affiliations to ensure each franchise is equally represented in the farm system.

If the RiverDogs lose their Yankee affiliation and are picked up by another organization, it wouldn't be the first time.

Before the RiverDogs, the team was known as the Charleston Royals, an affiliate of the Kansas City Royals, in its first years of existence from 1980-1984.

In 1985, the San Diego Padres took over the Holy City team and renamed it the Charleston Rainbows. The Texas Rangers retained that name when they took over in 1993, but eventually renamed the team the RiverDogs a year later.

That name has stayed the same, even after the Tampa Bay Rays took over in 1997 and finally the Yankees in 2005.

Another reason the RiverDogs won’t be disappearing any time soon: the brand is too valuable, said Goldklang.

In 2017, Charleston reached a years-long goal by eclipsing 300,000 fans in a single season. They repeated that feat twice and were hoping for a fourth consecutive year in 2020.

“The focus often is on the quality of the minor league ballpark and the support the minor league team receives from its community in terms of attendance,” he said. “We're confident that the RiverDogs rank well on those as well as other metrics.”

He isn’t wrong. Year after year, the Holy City team ranks among the best in terms of promotions and merchandise sales.

For example, Minor League Baseball in July 2019 gave Charleston Promotion of the Month for Helen McGuckin Night, one where the team made light of a bad Google review posted by McGuckin, who didn’t actually visit the stadium.

Also in July, the RiverDogs learned that they finished among the top 25 in 2018 merchandise sales in the entire farm system. The team accrued more than $400,000 in sales for that year.

The MiLB office has not yet released its top 25 list for 2019. But it could bear good news again for Charleston, since last year's sales increased by 10 percent.