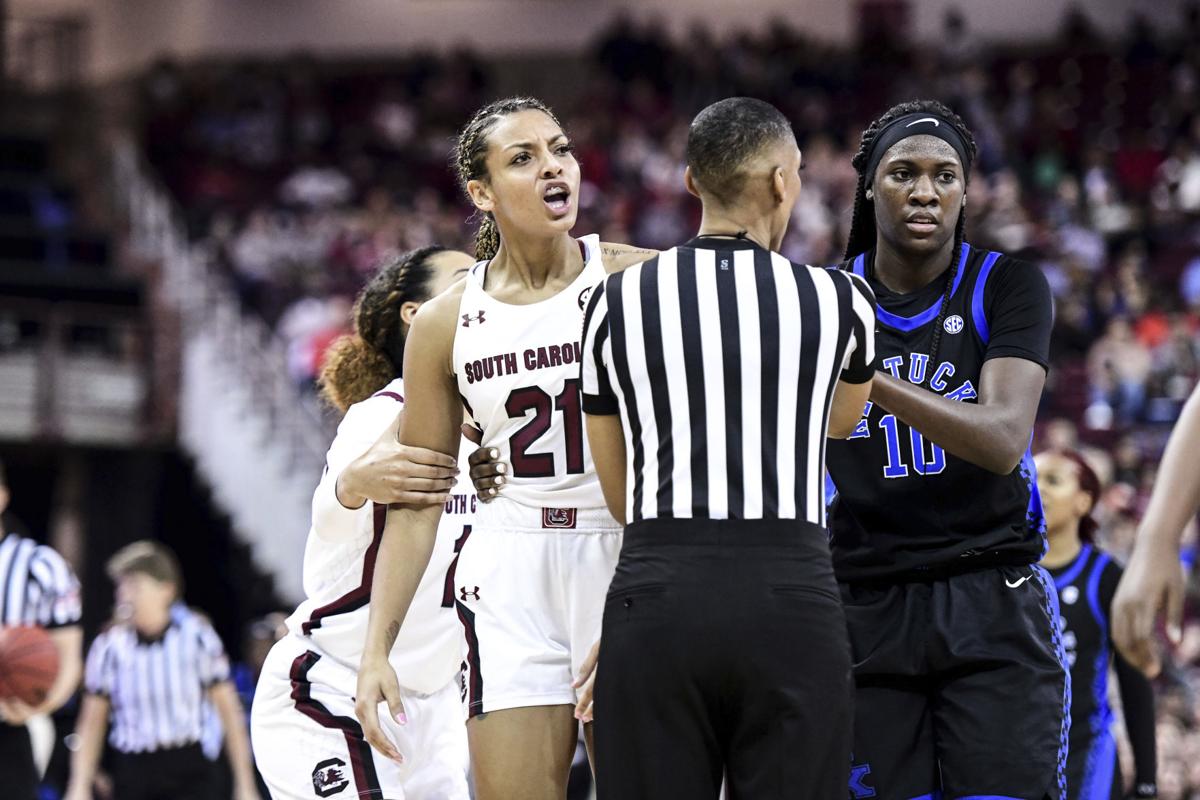 Mikiah Herbert Harrigan, aka "Mad Kiki," has channeled her temper into an All-SEC season. File/AP 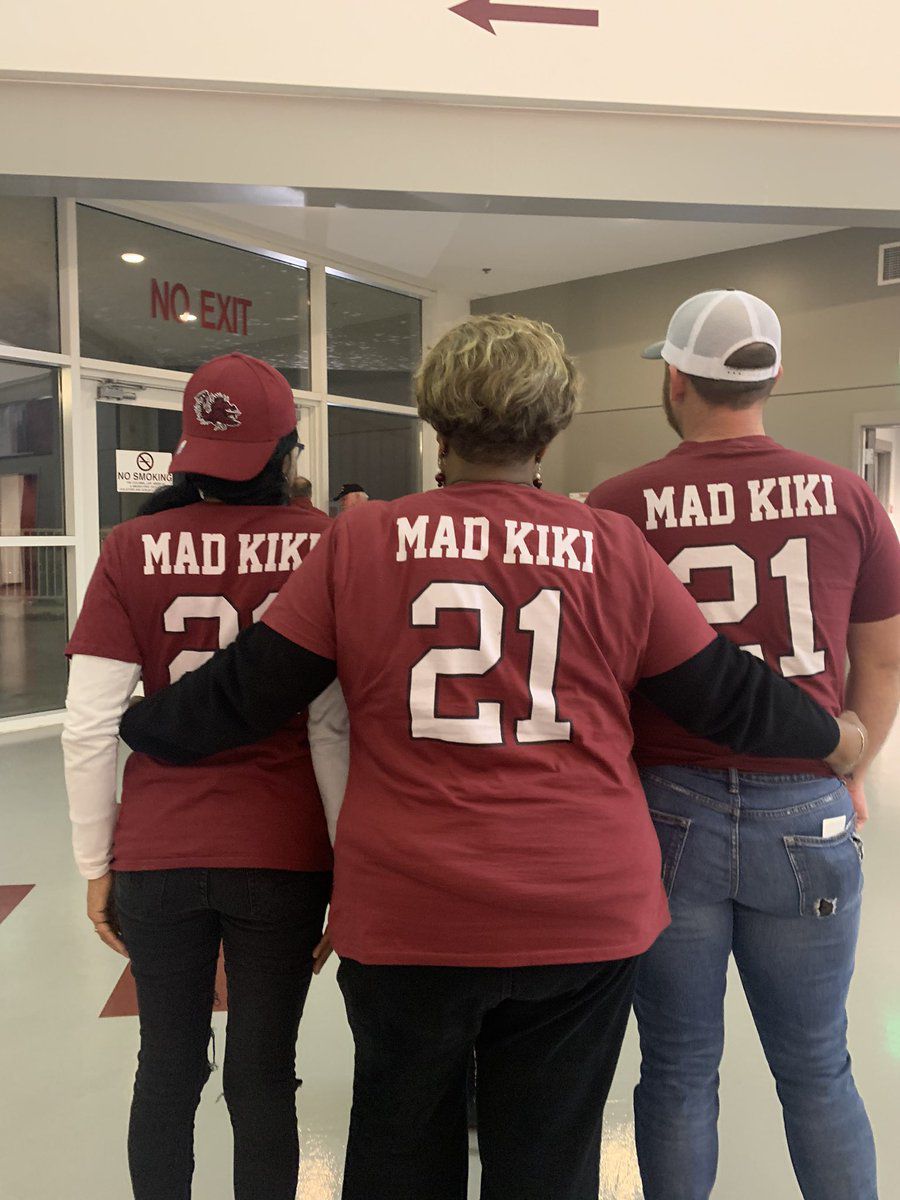 A group of fans has adopted "Mad Kiki's" nickname. File/Twitter 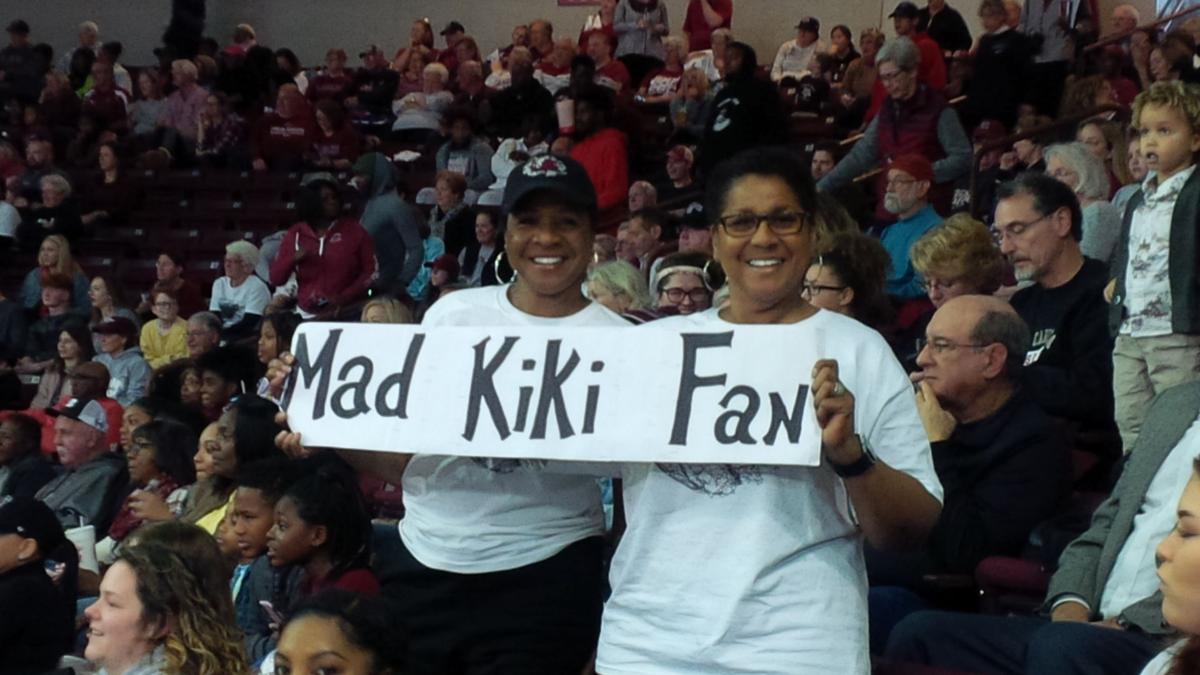 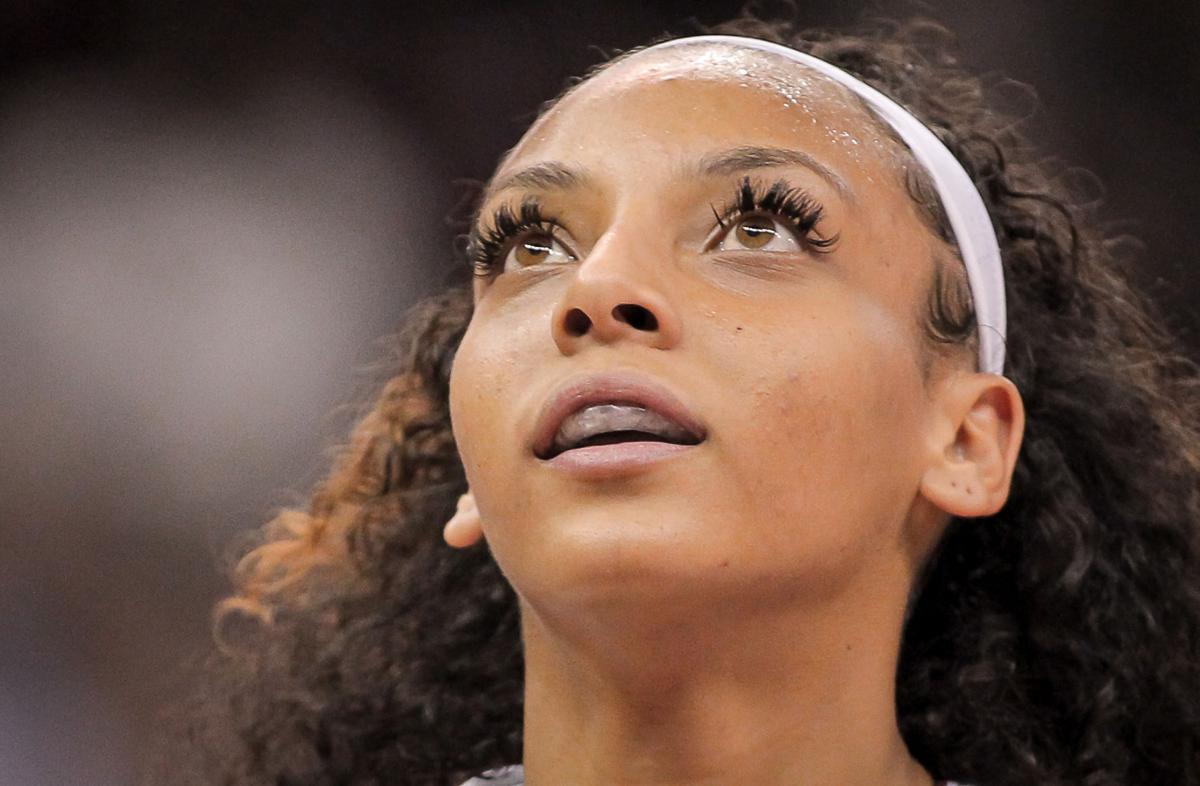 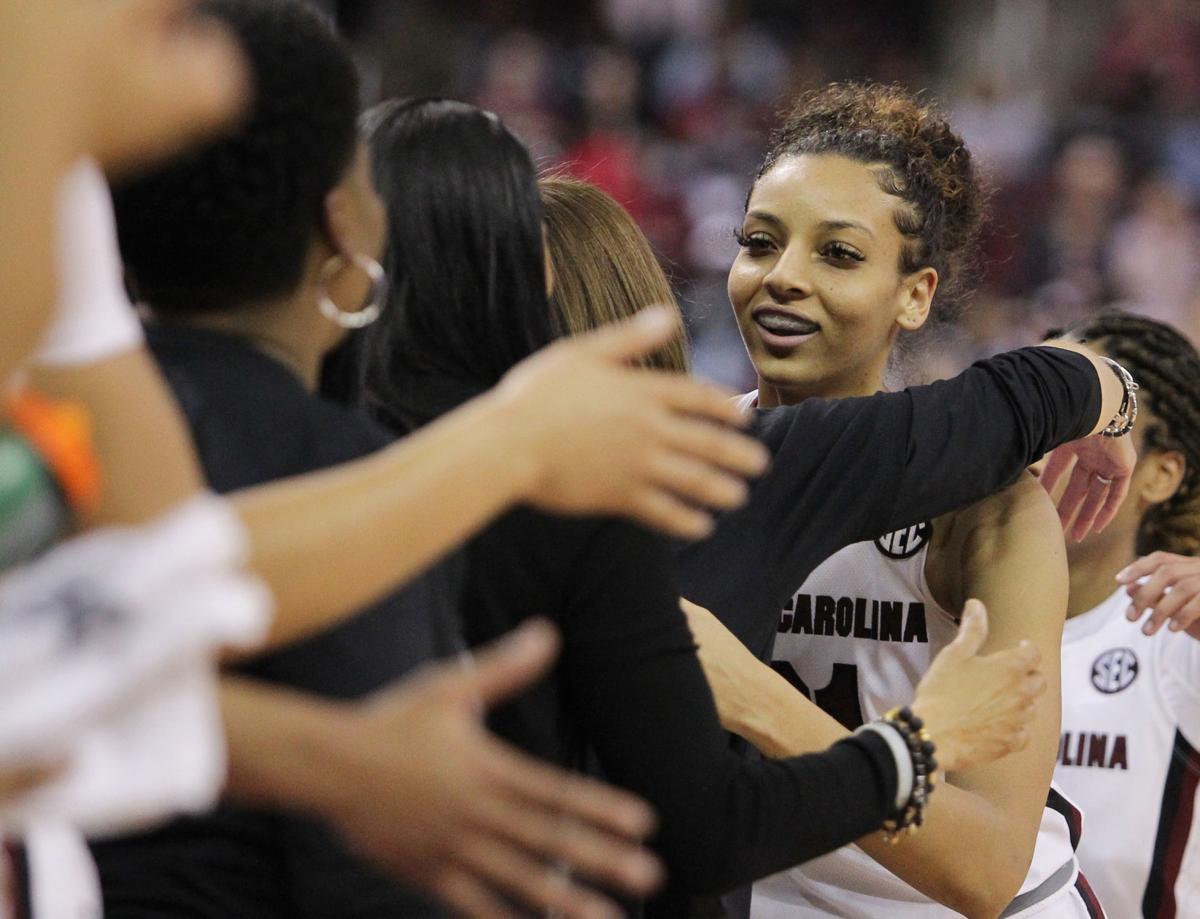 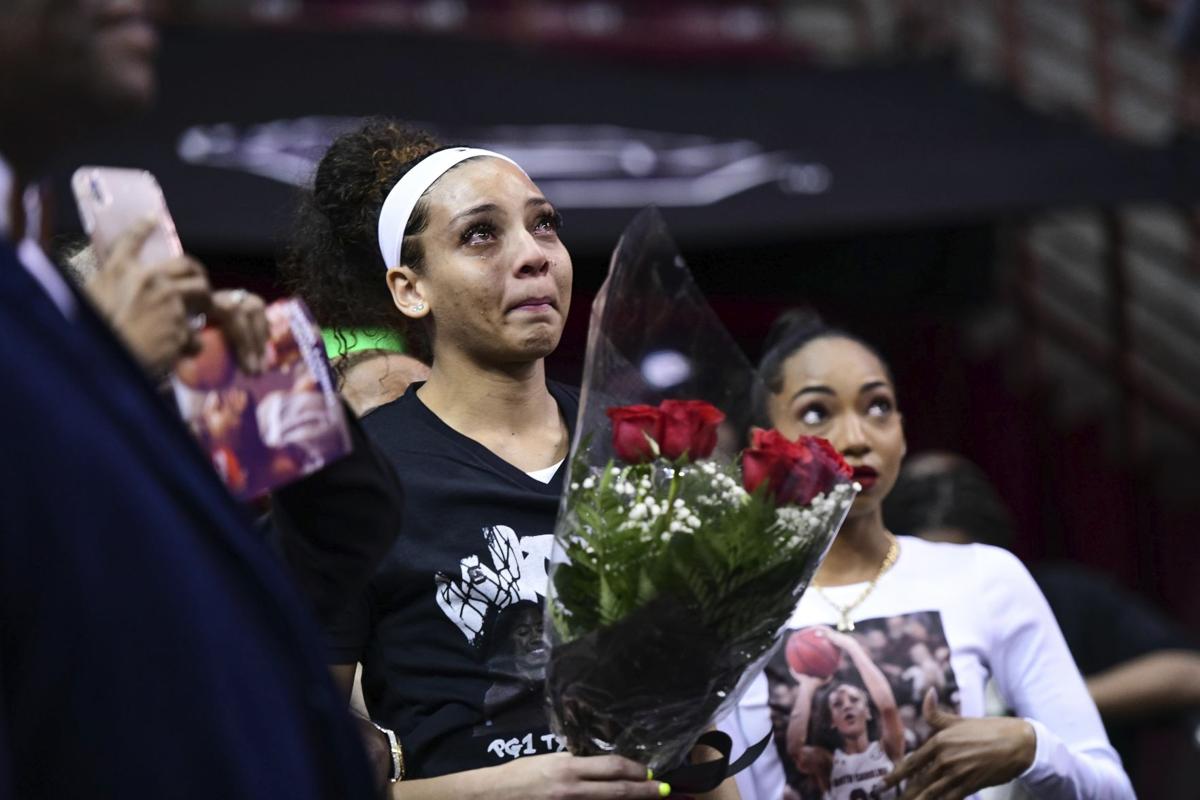 Mikiah Herbert Harrigan was honored for Senior Night before a win over Texas A&M. Sean Rayford/AP 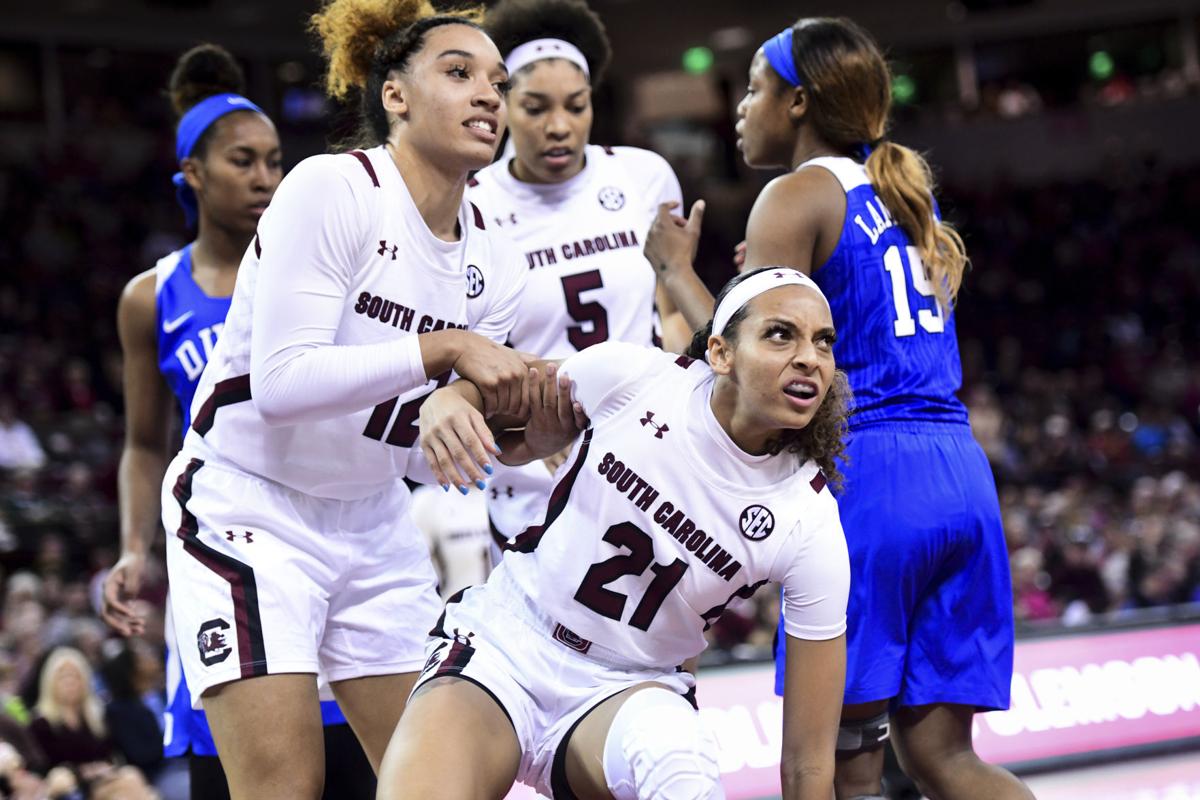 Mikiah Herbert Harrigan (21), has learned to channel her aggression this year instead of letting it sap her game. File/AP

Mikiah Herbert Harrigan, aka "Mad Kiki," has channeled her temper into an All-SEC season. File/AP

COLUMBIA — They love her when she’s angry.

It’s become a movement this season. Any time senior forward Mikiah Herbert Harrigan makes a play, they’re on their feet.

“When she gets fouled or anything, she gets that attitude,” gushed Anita Darby of Irmo. “In one of Dawn’s interviews, she said, ‘You don’t want to see Mad Kiki.’ That started it and we just ran away with it.”

Herbert Harrigan shows off the deadly 15-foot jumper that has her tied for the scoring lead for the No. 1-ranked South Carolina women's basketball team. Then someone in the stands unfurls a banner reading, “Mad Kiki Fan.”

She swats another shot, further linking her with legendary Gamecocks Alaina Coates and A’ja Wilson as the only players in program history to breach the 200-block barricade. Fans stand up to display Herbert Harrigan’s No. 21 with “Mad Kiki” etched above it.

When she gets the look — “I don’t like people tryin’ me,” she growled after a sophomore-year talking-to — fans clasp their hands and crane their necks.

The Incredible Hulk always warned people they wouldn’t like him when he’s angry just before he transformed into a green Hercules.

She scored 15 of the Gamecocks’ first 17 points and finished with 20 Sunday as USC beat No. 12 Texas A&M and completed a 16-0 SEC season. She’s chipping in 12.9 points per game (tied with SEC Freshman of the Year Aliyah Boston) and is second on the team with 5.6 rebounds.

But those are numbers. The ferocious temper mounted on a hair trigger can appear anytime, anywhere, as evidenced Sunday when Herbert Harrigan was in tears for her Senior Night, then plowing through Aggies five minutes later.

Her game has always been there, Herbert Harrigan refining her status as a 6-2 forward who willingly bloodied her nose to grab rebounds while sticking jump shots from all over the court. A&M coach Gary Blair bemoaned losing her to Staley and the Gamecocks on the recruiting trail four years ago, while Staley reflected on how early and often she had to yank the reins of her headstrong power forward.

She scored the last points of a national championship season as a freshman, but Staley was so fed up after a particularly galling sophomore-season loss (Herbert Harrigan blocked four shots but had zero points and two rebounds), that she told her to either play her game or sit down.

Herbert Harrigan responded with four straight games in double figures, helping guide the Gamecocks to the 2018 SEC Tournament championship. Staley knew how to coach the player but the personality was something else.

“I have the same competitive attitude to my game,” said her mother, Michelle Herbert, a recreational star in tennis, volleyball, tournament racquetball and taekwondo. “I’ve always known Kiki to play her game. It’s a very aggressive game.”

The family moved from Anguilla, a British territory in the Caribbean, to Pembroke Pines, Fla., in 2010. Herbert Harrigan was fluent in netball but not basketball. It’s the same concept, but there are seven players on a squad, no dribbling (players have to pass the ball) and a rim with no backboard.

Her netball experience had been to stand under the basket, catch and shoot, which went well outside of getting undercut one time and breaking both wrists while trying to catch her fall. Her middle-school coach pulled her out of the between-classes corridor one day and asked if she’d like to play basketball.

That led to a strong high-school basketball career and then a scholarship at USC, where she has routinely played in front of crowds larger than the population of her entire home island. Her contributions steadily increased, surviving a mess last offseason where she thought she wanted to transfer only to change her mind three days later.

“It was really like a focus for me, coming into my senior season, trying to calm down, take a deep breath, and relax and try to lead my team. So we can win a national championship,” Herbert Harrigan said. “(My teammates) know how when I get frustrated, they know how I am, so they kind of just come to me.”

Controlling, shaping and using the rising tide of her aggression has combined with the Gamecocks’ other factors to present a formidable team as it enters the postseason. Beginning at noon Friday in the SEC Tournament, Herbert Harrigan gets to take her show on the road.

“It came from the fans, kind of, seeing me play. You know I get a little upset,” she said of her nickname. “Someone sent it to me on Instagram and that’s when I started seeing all the posts.”

It could be a four-stop tour over nine games and three cities. The Gamecocks are in Greenville this weekend, back at Colonial Life Arena in two weeks for the first two rounds of the NCAA tournament and plan to return to Greenville in three weeks for the next two rounds. After that’s the Final Four in New Orleans.