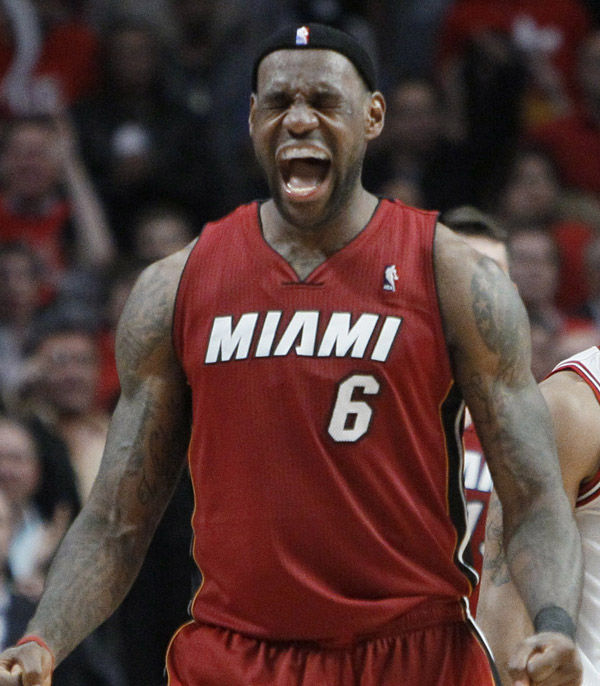 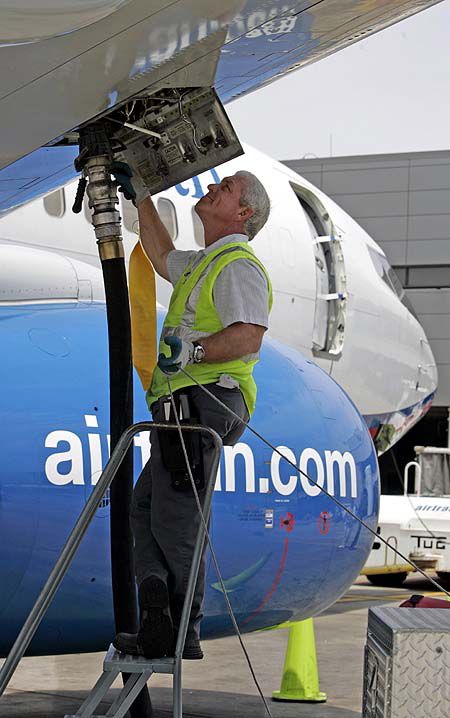 With many U.S. airlines shedding domestic flights and putting off plane orders, Don Thompson can only hope that he can keep his job refueling jets at Hartsfield Jackson Atlanta International Airport. Some small carriers already have filed for bankruptcy p

With many U.S. airlines shedding domestic flights and putting off plane orders, Don Thompson can only hope that he can keep his job refueling jets at Hartsfield Jackson Atlanta International Airport. Some small carriers already have filed for bankruptcy p

MIAMI -- LeBron James walked through the tunnel leading from the Miami Heat locker room Monday, stepped onto the court and gave a yell. He looked down at the NBA Finals logo newly affixed on the floor, smiled and nodded.

With that, it became real.

His championship chance -- the biggest reason he came to Miami -- has finally arrived.

Swept out of his only other finals appearance four years ago, James will get his long-awaited second opportunity starting tonight (9 p.m., WCIV-TV) when the Heat play host to the Dallas Mavericks in Game 1 of the NBA's title series. After a year like no other in his life, starting with the much-criticized "Decision," his jerseys being torched in Cleveland and never-ending, intense scrutiny of his every move, the last challenge will likely prove to be the toughest of them all.

"I'm honored to be here once again," said James, who led the Cavaliers to the 2007 finals and lost in four games to San Antonio. "Now with this franchise, it's an honor. As players, we worked hard. I worked hard individually to get to this point. And I had a lot of visions of being in this moment and now it's hit me, being on that floor, seeing the championship logos and everything, the finals logos. I'm very excited."

He chatted with teammates, taking part in a long shooting contest with Dwyane Wade, Eddie House and others, looking perfectly comfortable as dozens of photographers clicked away for 30 straight minutes. By now, being in the microscope is an accepted part of the deal for James, who has been dealing with this since his high school days.

Away from the court, though, those who are around the two-time NBA MVP say his focus is even sharper than usual. Winning a title likely won't change perceptions about James. His fans will surely remain fans, his critics will surely remain critics, no matter what happens. But to him, a championship would mean everything that took place since 9:27 p.m. on July 8, 2010 -- the moment he publicly said he would join the Heat -- was all worthwhile.

"He's focused," Wade said. "Obviously, we all want it. But in a different sense, he wants this, he wants to seize this moment. And you can tell by the way he's been playing, especially in late games. He hasn't left anything to chance, whether it's guarding the other team's best player, whether it's taking big shots, doing anything it takes. That's a player that I see hungry for a championship."

He's been that way since July.

When the Heat threw that much-maligned signing party for Wade, James and Chris Bosh -- an idea that was born from the team hoping to simply welcome Wade back to Miami, those organizing the event never knowing it would be James and Bosh sharing the stage with him until less than 24 hours before the bash began -- James talked about winning title after title after title.

With that, the bar was set.

"He's been zoned in and he has that killer instinct that is warranted for the playoffs," Heat center Jamaal Magloire said. "You can see that he's willing to do whatever it takes to win."

Even his detractors likely couldn't argue that this season.

Despite sharing the ball with Wade and Bosh, James finished the season averaging 26.7 points, 7.5 rebounds and 7.0 assists, numbers very comparable to what he was accustomed to posting when he was starring for the Cavaliers. To prepare for facing Miami in this series, the Mavericks have used Dominique Jones and Corey Brewer in practice, asking them to do the impossible: play like LeBron.

Mavs coach Rick Carlisle lauded their efforts. "You are trying to simulate a guy, that many would argue is unsimulatable."

The Heat have brought out their 2006 championship trophy at times this season for motivation -- James was among the players and coaches that posed with this year's trophy at ABC's request, part of the promotional photos and videos that will be used on finals broadcasts, joking that he held it and was asked to do everything with it "besides take it home."

It's not just redemption James seeks for what's happened over the past year. It's for what happened in 2007, too, and much more than that as well. He's long been considered one of the game's greats, but without a title, he knows that label would ring hollow.

"To be here is very humbling. It's very satisfying at this point," James said. "We want more."