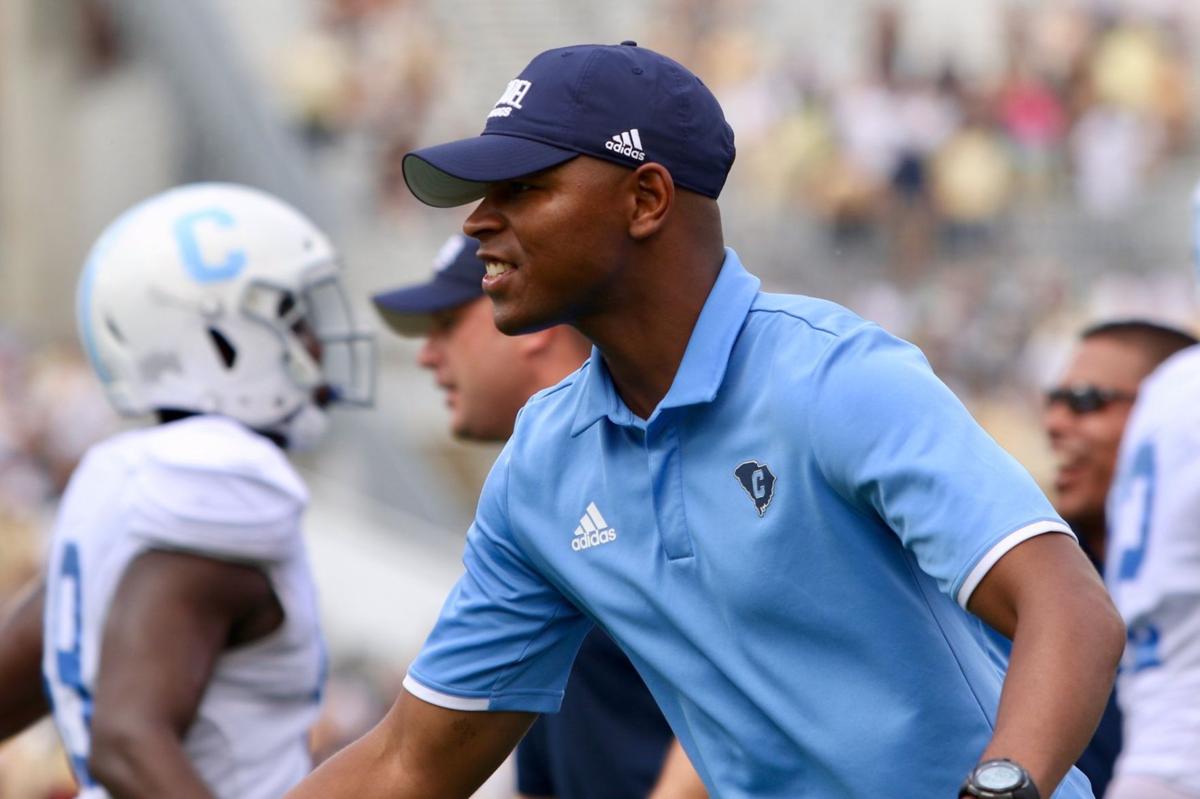 Ra'Shaud Graham, a 2016 graduate of The Citadel, is the team chaplain for Bulldogs football and campus director for the Fellowship of Christian Athletes at The Citadel. Provided 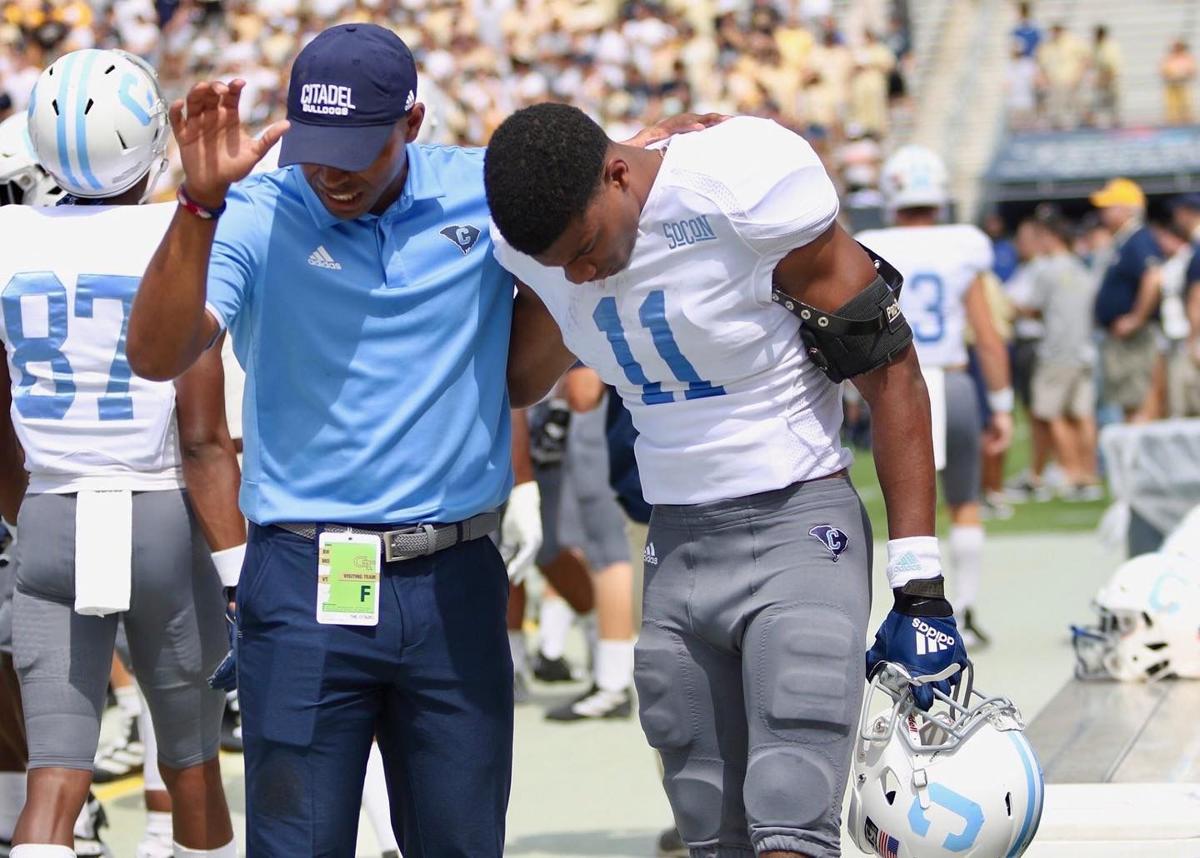 Ra'Shaud Graham, a 2016 graduate of The Citadel, is the team chaplain for Bulldogs football and campus director for the Fellowship of Christian Athletes at The Citadel. Provided

Ra'Shaud Graham sat in his grandfather's pickup truck, lost in thought and unsure of his next move.

Graham, who had just graduated from Lake City High School, had been accepted into The Citadel, where he planned to try out for the track team. But he didn't have the first clue as to how he'd pay for tuition and board and uniforms at the prestigious military school.

His mom didn't want him to go. His grandfather didn't know what to do. Graham was due to report to The Citadel the next day.

"I said, 'God, if you want me to go to this school, make it obvious to me,' Graham recalled. "I didn't want to be arguing with my family about going to The Citadel if I wasn't really called to do it."

An hour later, a friend called. He wanted to donate money to help pay for Graham's first semester.

"I took that money to The Citadel the next day and that's how I paid for school," Graham said.

That's also how Graham, who graduated from The Citadel in 2016 and is now the school's campus director for the Fellowship of Christian Athletes, made it through school. Semester by semester, the people of Lake City, a rural town of 6,000 in Florence County, put Ra'Shaud Graham through school.

"Gifts from people, donors from back home, the people poured into me time after time," Graham said. "I guess people saw the good in me that I didn't see in myself."

Support The Citadel's Fellowship of Christian Athletes at https://my.fca.org/rashaudgraham

Graham played football, wrestled and ran track at Lake City, the hometown of Challenger astronaut Ron McNair and Darla Moore, namesake of the school of business at the University of South Carolina. But he wasn't the best athlete ever from Lake City; that might have been former Major League Baseball player Tripp Cromer or former NFL player Derrick Faison.

"Ra'Shaud just had this charisma about him," said Lake City High School athletic director Matt Apicella, who coached Graham. "I think about 28 families in town adopted him and I was one of those. He was just one of those kids who, from a young age, you knew he'd be successful."

That doesn't mean it was easy. Graham, who ran track for two years at The Citadel, needed a fifth year to graduate. Again, it was with the help of his grandfather, a United Methodist minister.

"I was home one summer and he said, 'What are you doing at this place? Your grades are bad, you are not playing a sport, you're not involved in cadet life. Your are wasting time,'" Graham recalled. "And that moment really clicked with me."

By the end of the year, Graham had been named a company commander, tried out for and made the Summerall Guards, a precision drill unit, and earned graduation day awards.

The story behind The Citadel's surprise father-son homecoming reunion

During his Citadel career, Graham often returned to Lake City to speak at schools and churches and to help out the football team on Friday nights. In 2016, Lake City's mayor and city council honored him with a proclamation hailing his “love and devotion to our children and community."

Determined to give back to Lake City, Graham went back to his hometown after graduation, working as a coach and teacher for two years. Then, the FCA job at The Citadel came open, and Graham felt another calling.

"I could feel the tug on my heart," he said. "I love being around Citadel land, as I call it."

As the campus director of FCA at The Citadel, Graham ministers to all the Bulldog student-athletes. He's in the locker room and on the sidelines for almost every football practice and game.

"He plays a lot of different roles for us," said football coach Brent Thompson. "He knows the guys and went to school with a lot of them, and has an opportunity to guide them in a way that we as coaches don't. He served in high leadership roles around here and can help them navigate life at The Citadel, not just from a religious standpoint but as a cadet."

Graham's FCA salary at The Citadel depends on fund-raising, so some former Citadel athletes have been raising money to support the ministry. Former Citadel football player and track athlete Dylan Gidado is one of those.

"By meeting with the athletes individually, traveling with the teams to away games and hosting weekly FCA meetings, Ra’Shaud spends copious amounts of time ensuring that these young men and women get the spiritual support and guidance that they need in order to excel, not only on their respective sporting surfaces but also in life," Gidado said.

Through the FCA, Graham said, he can give back both to The Citadel and the folks back home in Lake City.

"That community put me through school, bought me food and clothes," he said. "I owe a lot to Lake City. The Citadel gave me all these opportunities, and now I have the platform to go back to Lake City and share what God can do with the young people there."