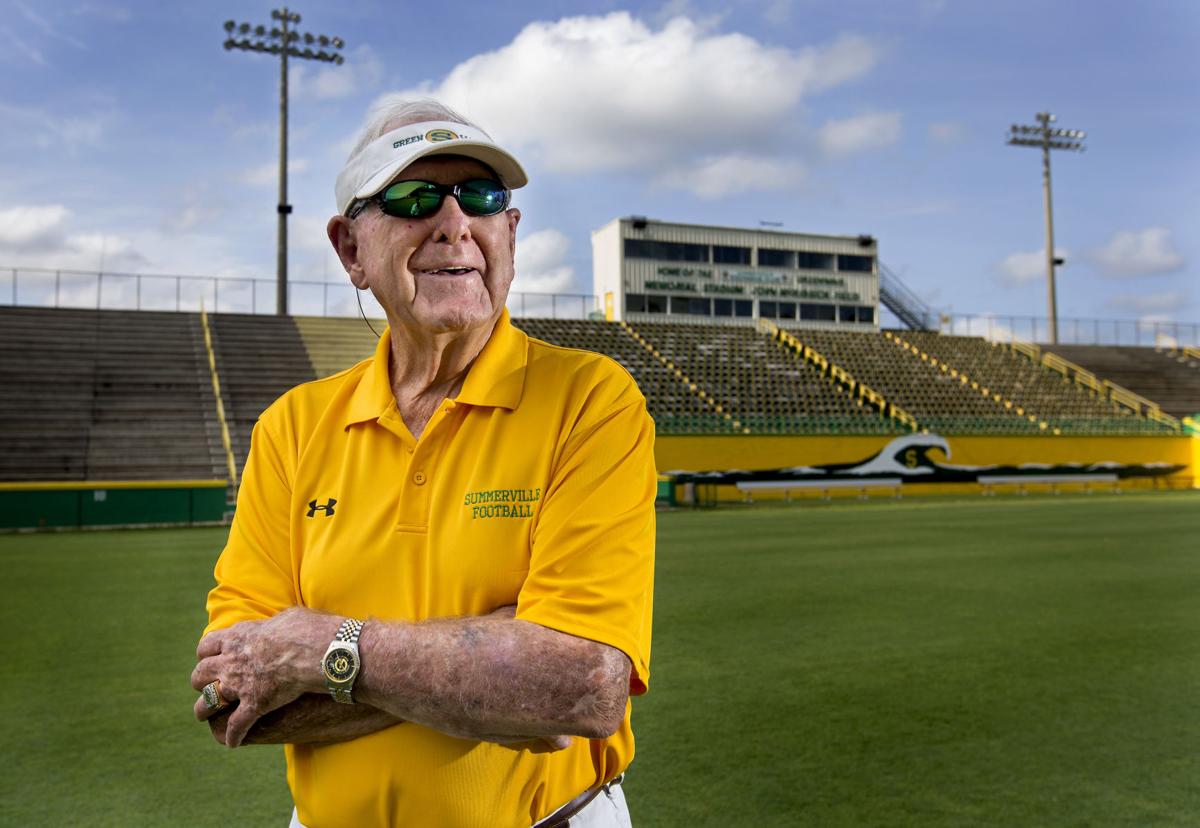 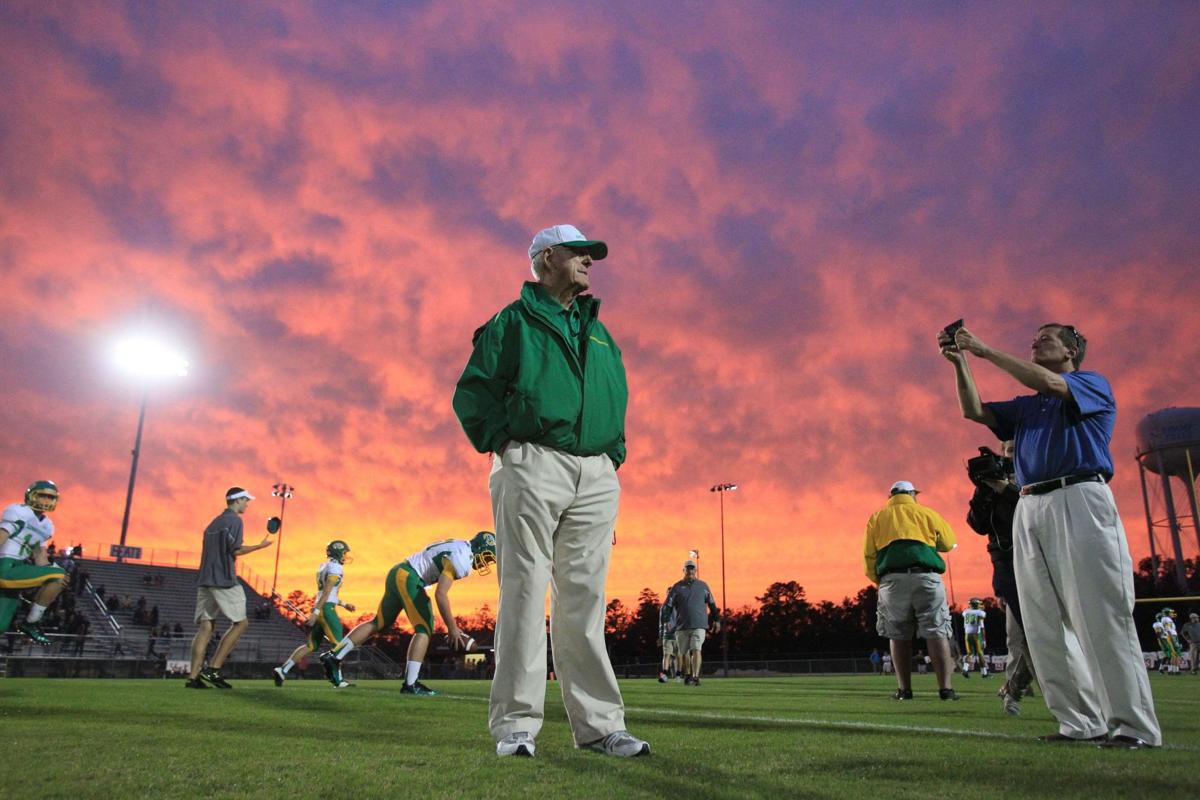 Summerville coach John McKissick before a 2012 game. McKissick died Thursday at his home in Summerville. File 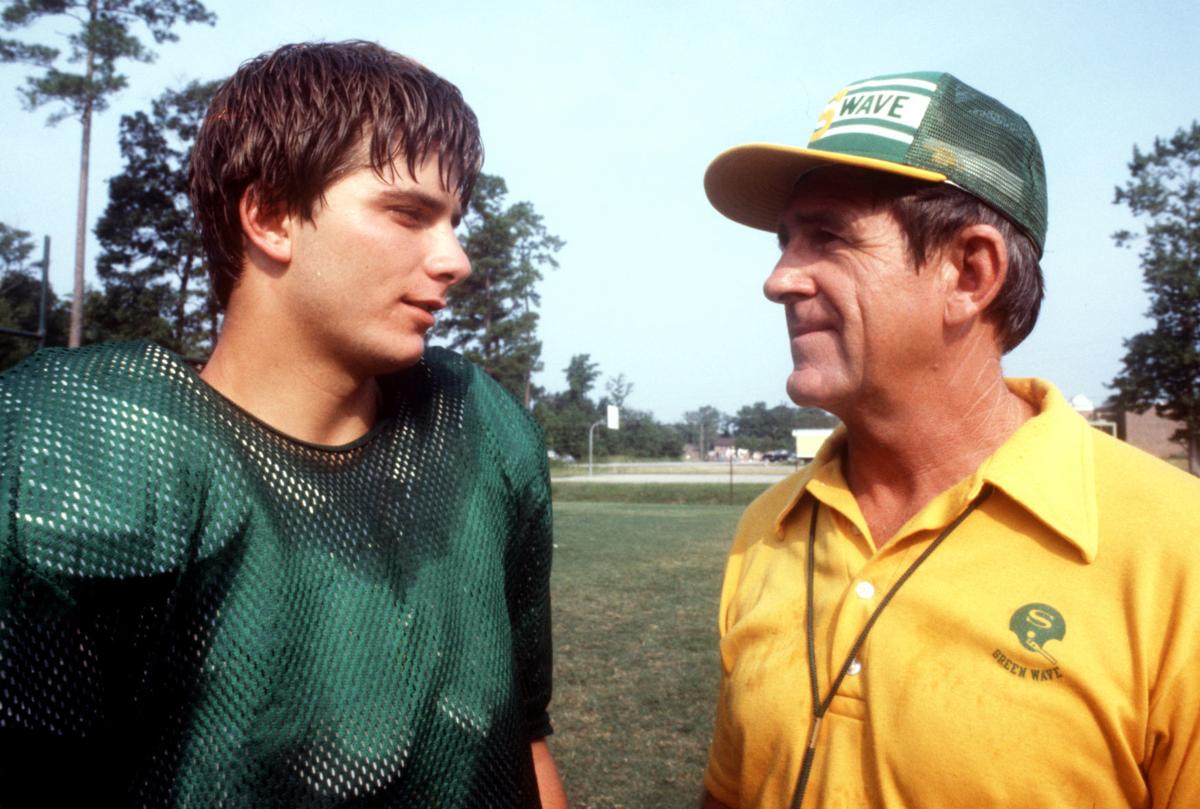 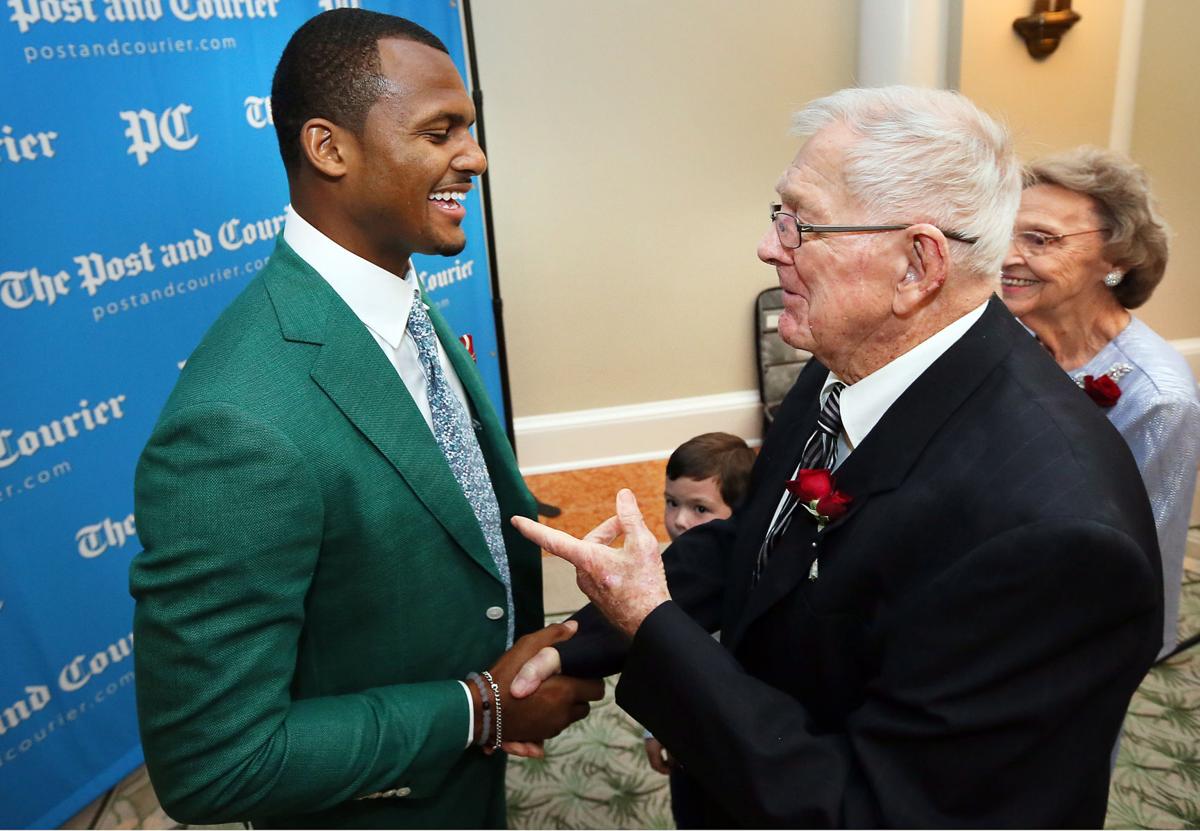 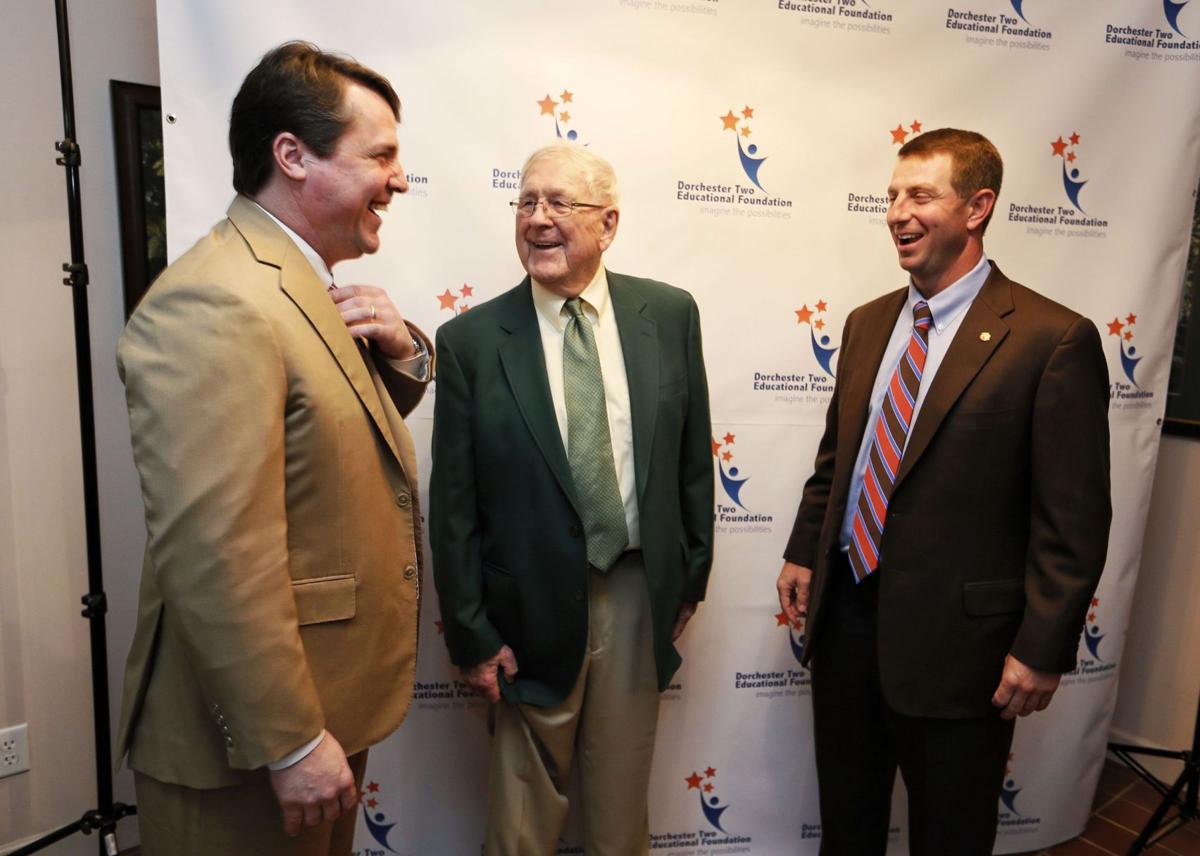 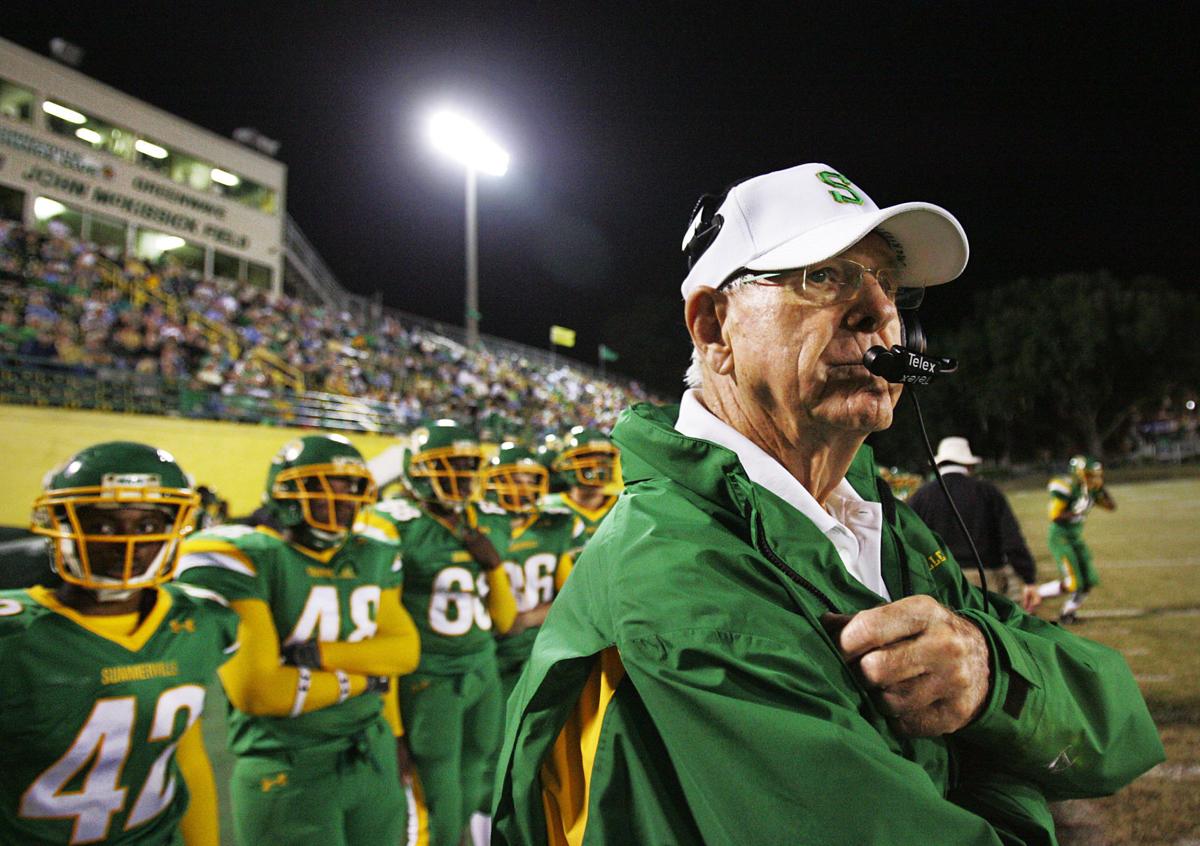 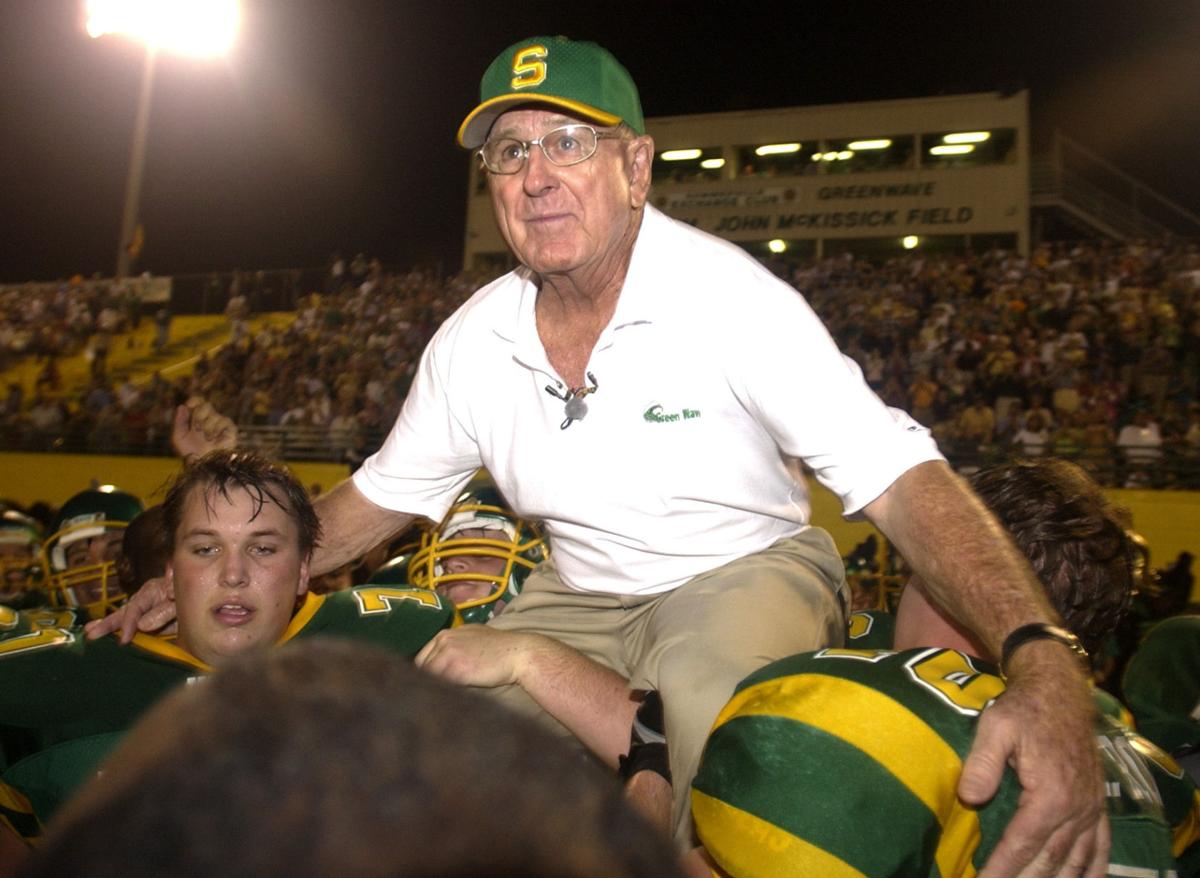 Summerville head football coach John McKissick is carried off the field by his players after defeating Wando 34-17 for his 500th career victory in 2003. File/Staff

John McKissick, the nation’s winningest football coach at any level, died Thursday at his home in Summerville.

McKissick led the Summerville football team for nearly six decades, taking over the Green Wave program in 1952 and working the sidelines through a dozen presidential administrations — from Harry Truman to Barack Obama — until he retired in 2014.

McKissick compiled a record of 621-155-13 in 62 seasons with the Green Wave, the most wins of any coach at any level, and captured 10 state championships, his last coming in 1998.

"It’s a tremendous loss not only for the Summerville community, but the Lowcountry and the state of South Carolina,” said former Stratford High School football coach Ray Stackley. “For guys like me, who coached against him for a lot of years, we became fierce competitors with him, but also tremendous friends. He and I have had a special friendship for a long, long time. It’s going to be hard to imagine the Lowcountry and Summerville football without John McKissick.”

McKissick helped turn Friday nights in Summerville into a community tradition that generations of families — grandfathers, fathers and sons — would play and later flock to Memorial Stadium to watch the Green Wave. The field was officially named McKissick Field in 1987.

Football became such a must-see event in Summerville that the town once postponed Halloween because it fell on a game night.

In the program’s heyday, the scene at Memorial Stadium with McKissick roaming the sideline became the embodiment of what big-time high school football meant to a small Southern town. It was common to see sellout crowds of 10,000 cram into Memorial Stadium, with fans hanging from the sprawling oak trees that surround the field just to get a glimpse of the game.

McKissick was more than a football coach. He was a mentor and father figure to the thousands of players he coached. McKissick also served as the school’s athletic director, wrote two books and was an inventor. In 1964, McKissick was granted a U.S. patent for the cloth helmet covers most teams use to distinguish between offense and defense. He held the patent on it for 17 years and used the proceeds to put his two daughters through college.

McKissick’s teams compiled a state-record 41-game winning streak from 1978 to 1980. He became the game’s winningest active coach in 1983, and a decade later broke the national record for wins when he recorded his 406th victory in 1993. In 2003, McKissick collected his 500th victory at home when the Green Wave defeated Wando High School. He became the only football coach to notch his 600th win — a 37-21 victory over Ashley Ridge in 2012 — and was carried off the field by his players.

He won state and national coaching honors and was named to the S.C. Athletic Hall of Fame in 1982 and the National High School Sports Hall of Fame in Kansas City in 1990. McKissick was presented with the “Order of the Palmetto” by Gov. Carroll Campbell in 1986. It is the highest award given to civilians by the state of South Carolina.

He was named to the South Carolina Hall of Fame in 2005. Twelve U.S. presidents came and went during McKissick’s tenure and four — Jimmy Carter, Ronald Reagan, Bill Clinton and George W. Bush — sent letters of congratulations or commendations.

McKissick started his career coaching six-man football in Clarkson, N.C., and was turned down to become the head coach in his hometown of Kingstree the next year because he didn’t have enough experience.

John McKissick's name commands respect in every sport, SC and beyond

He was hired by Summerville in 1952 for $3,000 a year. McKissick often joked that he got the job with the Green Wave because he was the only candidate who didn’t ask about the position’s salary.

McKissick was born on Sept. 25, 1926 in Greenwood, and his family moved to Kingstree while he was in elementary school. He lettered in four sports at Kingstree High and graduated in 1944.

He served as a paratrooper with the 82nd Airborne Division during World War II and was scheduled to be part of the invasion of Japan, which was scrapped when Japan surrendered after the U.S. dropped atomic bombs on Hiroshima and Nagasaki.

A season watching from the stands

After his discharge from the U.S. Army, McKissick attended Brevard College and received an associate arts degree in 1949. He went to Presbyterian College, where he received a Bachelor of Arts degree in economics in 1951.

A year later, McKissick married the former Joan Carter of Kingstree. They have two daughters, Debbie Call and Cindy McElveen. McKissick received his master’s degree in psychology and education from Western Carolina in 1969.