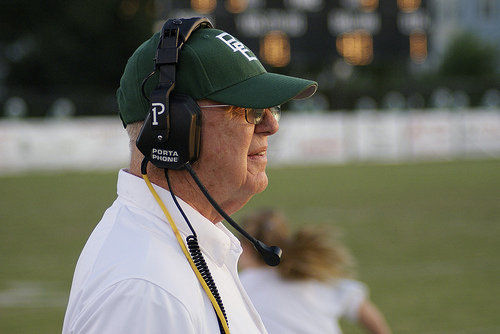 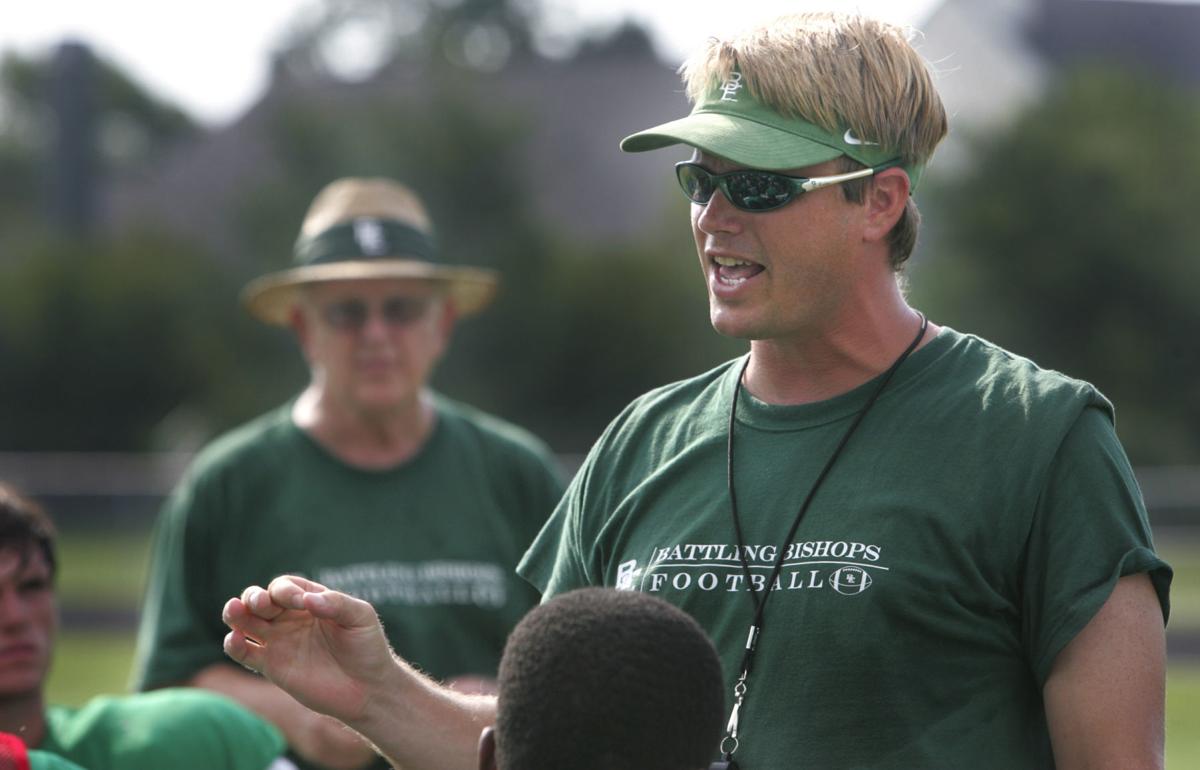 John Cantey (foreground) played quarterback for his father, Jack Cantey (background), at Bishop England before taking over as the Bishops' head coach. File/Staff 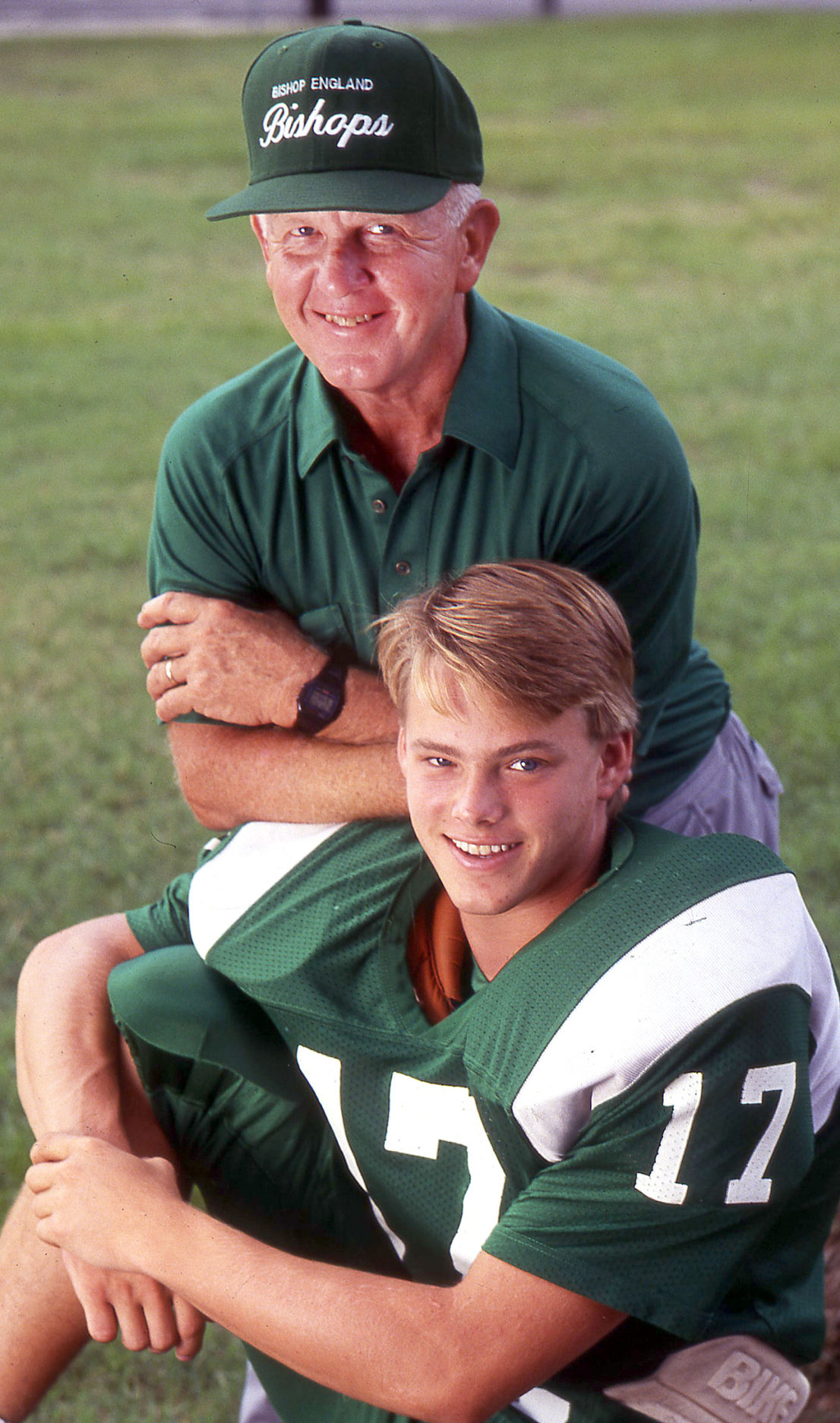 Jack Cantey was beloved and respected by his football players over a 30-year career at Bishop England High School.

But those players weren't above playing a trick or two on the old coach.

"You had to lure him under false pretenses if you wanted to give him an award," said Charleston businessman and author Tommy McQueeney, who played for Cantey at Bishop England in the 1960s. "If he knew he was getting an award, he wouldn't come."

That sense of humility and modesty perfectly summed up Cantey, who died Saturday at the age of 84.

"Everybody respected him and everywhere we went he had friends," said former Bishop England coach Jim Daniel. "You can rub people the wrong way sometimes when you are in the position of high school football coach, but he never seemed to rub anybody wrong. And he was a very humble man, very humble."

Cantey won 186 games and numerous region titles at Bishop England from 1964 to 1993, earning a spot in the S.C. Athletic Coaches Association Hall of Fame. The Bishops' stadium at the Daniel Island school is named after him. And his son John, who played quarterback for him at BE, is now the Bishops' coach.

"For so long, he operated a Cadillac program on a Volkswagen budget," Runey said. "He didn't ask for anything. When we were located downtown, we didn't have any athletic fields. And he would load up everything in an old yellow van that we had to take all our equipment to whatever field we were practicing at that day.

"Bishop England relied for so long on volunteer coaches, and because of that Jack didn't want to ask anybody to do anything extra. If he wanted it done, he did it himself. In reality, he was Mr. Bishop England."

Current BE coach John Cantey played quarterback for his father in the late 1980s and early '90s, then coached under his father before taking over as head coach and leading the Bishops to state titles in 2011 and 2012.

"I was so fortunate to be able to be around him for just about my whole life," John Cantey said. "I saw the way he treated everybody the right way and how he saw the value in everybody as a true servant leader.

"My whole life, people have said to me, 'You are Coach Cantey's son? He made a huge impact on my life.' That's a very proud thing for me, that he impacted so many people."

The elder Cantey graduated from Bishop England in 1953 and then from College of Charleston, earning a master's degree from The Citadel. He coached at Winnsboro and Moultrie high schools before taking over at Bishop England in 1964. He compiled a record of 186-133-5 at BE, and also served as assistant principal and athletic director.

One of his best teams was the 1967 squad that went 10-0 in the regular season and played St. Andrews in a Lower State championship game that drew more than 20,000 people to Johnson Hagood Stadium. His 1976 team made the state championship game; he was named region coach of the year seven times, and coached the S.C. Shrine Bowl team in 1993.

When Daniel took over at Bishop England in 2001, Jack Cantey was still coaching as a volunteer.

"I remember I came over from The Citadel and had never coached high school ball before," said Daniel, now the offensive coordinator at First Baptist. "Our very first meeting with the assistant coaches, I walked in and Coach Cantey was sitting to my right. I started telling these guys, this is how we're going to be successful at Bishop England.

"And then I looked at Coach Cantey and thought, 'What am I doing telling this legend how to be successful at BE?' But he gave me his approval and took me in. He coached the offensive line for us and did a great job with all this new, no-huddle spread stuff we were running. That was a big moment for me, getting support from a legend at that place."

The elder Cantey also served as a volunteer coach for his son, and was able to attend games when John Cantey and the Bishops won the state title in 2011.

Since his father died, John Cantey has heard from many of his father's players.

"It means the world that they still speak so fondly of him," he said. "They went to school 20 to 30 to 40 years ago and still remember him in the hallways, or as a coach, and he had a positive impact on so many of them."

Jack Cantey is survived by his wife of 63 years, Rosemary, and five children and 16 grandchildren.