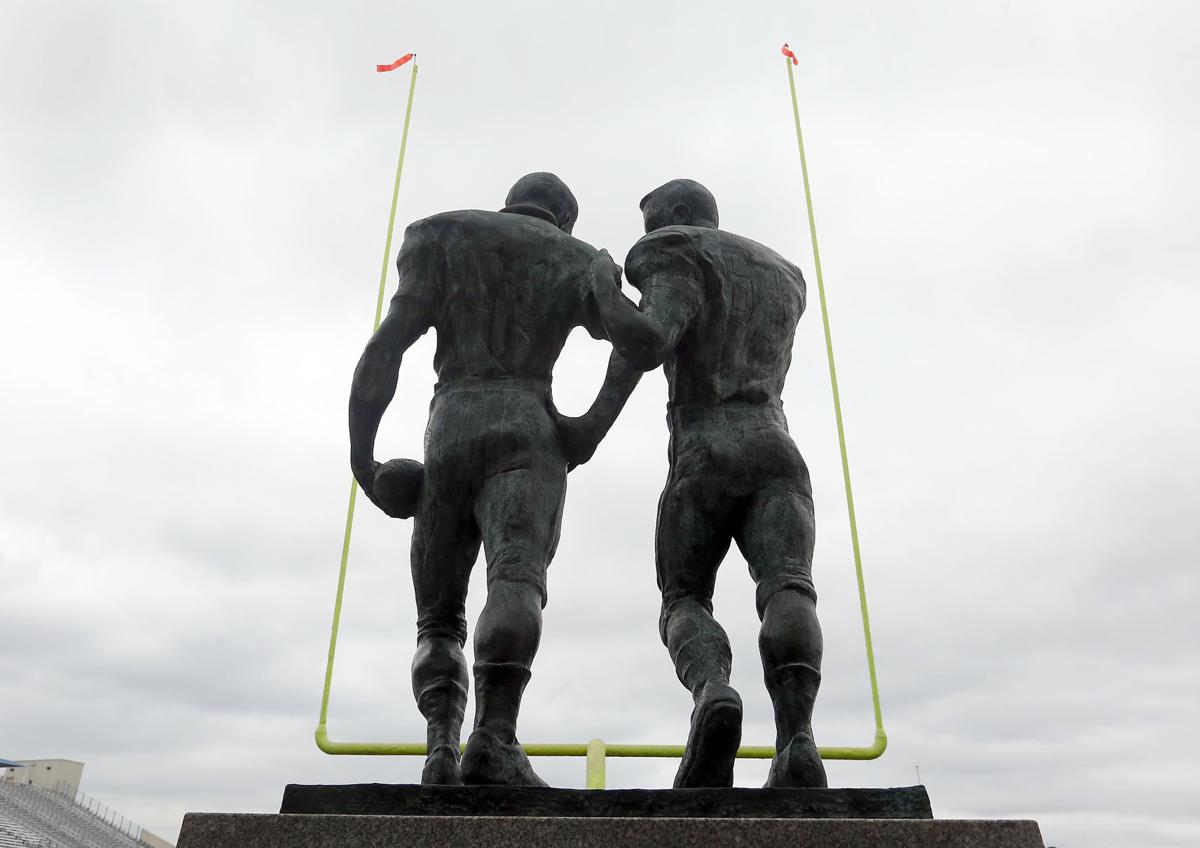 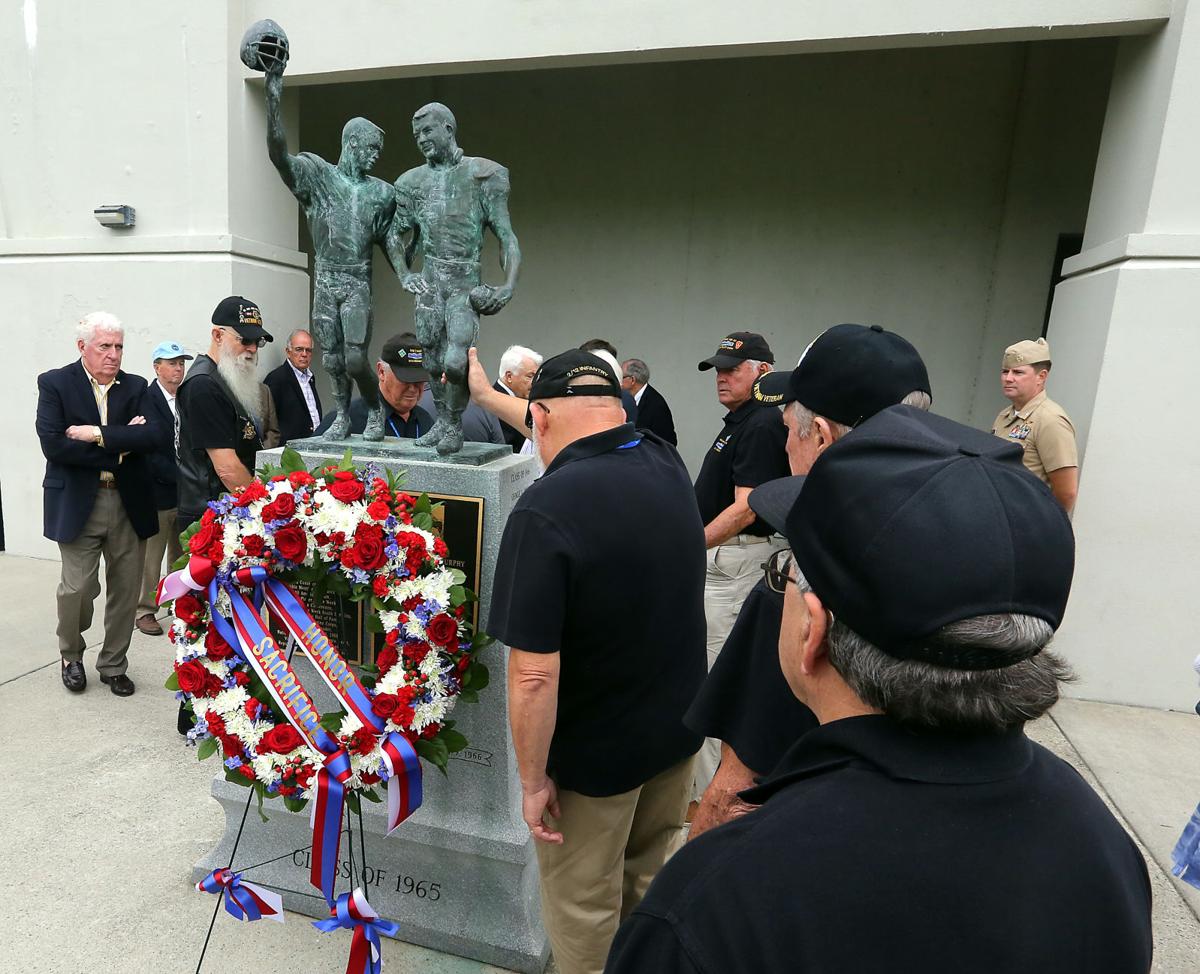 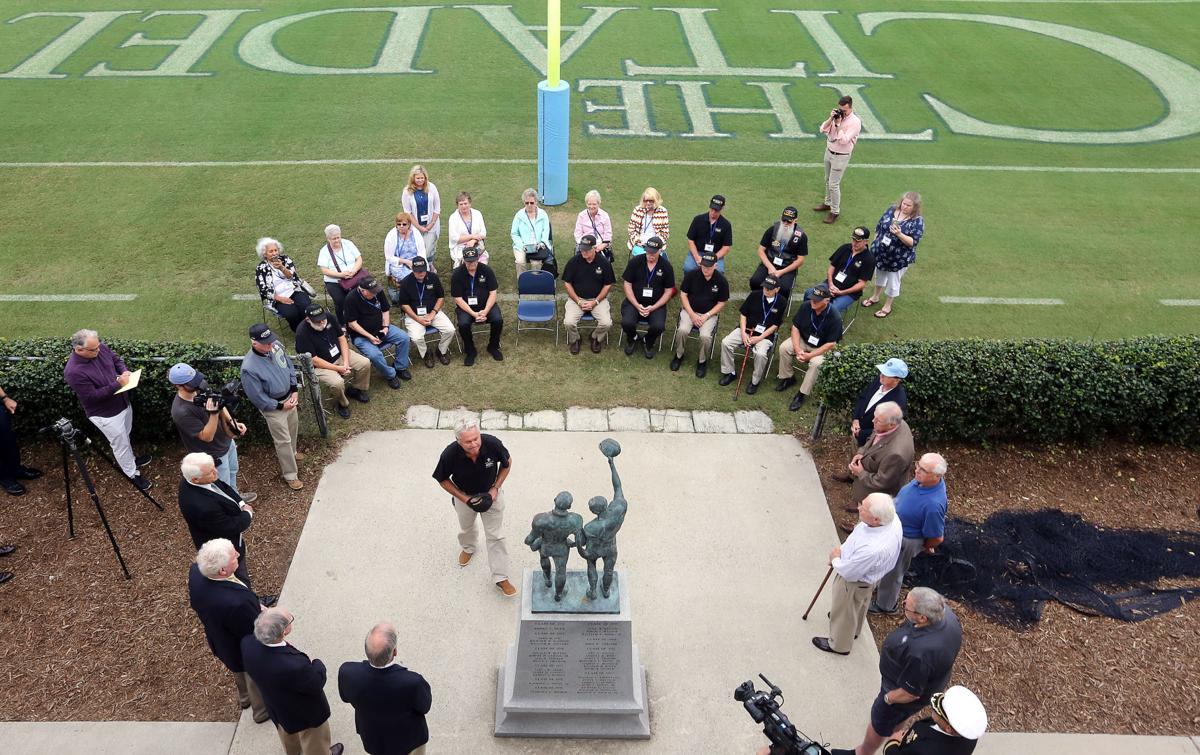 Bill Bradbury, one of three Vietnam veterans saved by 1st Lt. Frank Monroe (Skip) Murphy in 1966 in Vietnam, walks up to the Vietnam memorial at Johnson Hagood Stadium on Wednesday. Murphy, from the Class of 1965, died saving them in December of 1966. The memorial honors Citadel players Murphy and Joe Missar, killed in Vietnam in 1966. Brad Nettles/Staff 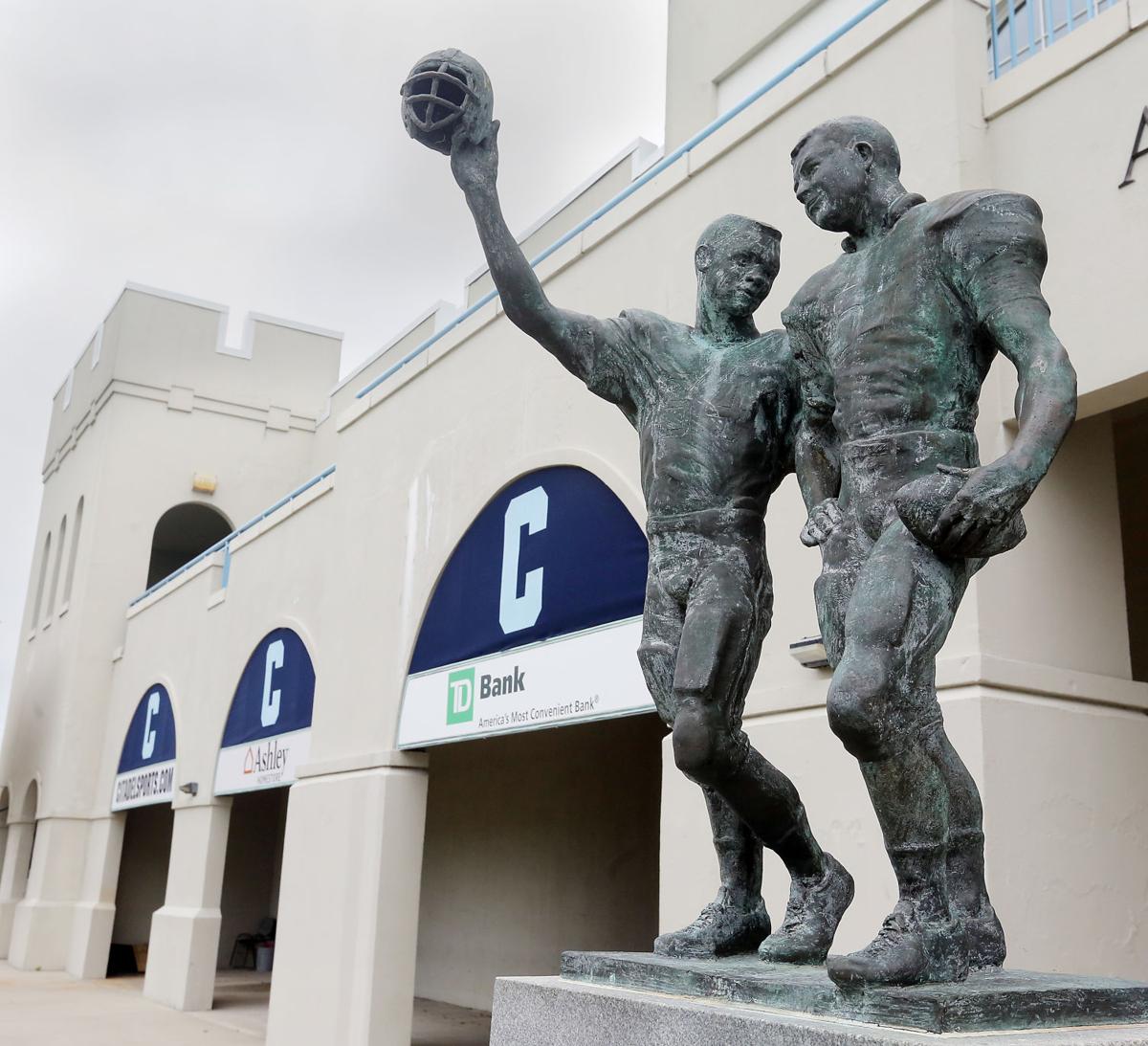 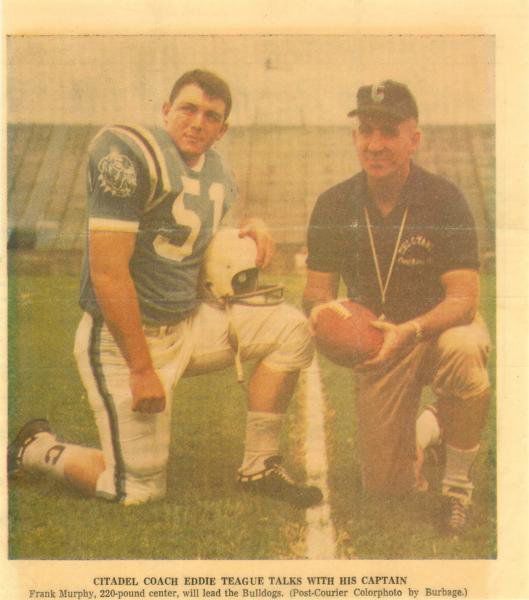 Bradbury called the names of nine platoon members, all present and accounted for these 53 years later. Then he called two other names, announcing them twice each.

If Missar and Murphy were not present in spirit on Wednesday at The Citadel's football stadium, they were there in bronze, and in memories.

Nine members of 12th Infantry Recon came from around the country to gather at the bronze statue of Missar and Murphy that stands in front of the Bulldogs' football locker room at Johnson Hagood Stadium.

Missar and Murphy were both Citadel graduates and football players, killed by explosive devices six months apart in 1966 during the Vietnam War. Citadel football players touch the statue as they leave the locker room to take the field on game day, just as they will before Saturday's Military Appreciation Day game against Western Carolina.

"It reminds us as players of a much greater reason for playing the game," former Citadel linebacker Joe Crochet wrote in his book, "My Winning Seasons." "We play for those who wore the uniform before us."

On Wednesday, members of the Recon Platoon reached out one by one to touch that same statue, and to remember the events of Dec. 7, 1966, when Lt. Frank M. "Skip" Murphy was killed while rescuing Bradbury, Neal and Eising and others from that ill-fated patrol.

"He saved our lives," Eising said.

In 1966, the 12th Infantry Recon Platoon was operating in the Iron Triangle of Vietnam, a 120-square-mile area north of Saigon. It was a largely flat landscape covered by dense underbrush and tall elephant grass and known as War Zone 3. There were some 180,000 U.S. military personnel in Vietnam at the time.

"The area was like a highway of infiltration by the North Vietnamese, hosted by what was left of the Viet Cong units," said Bradbury, who is now 77 and lives in Mount Pleasant.

On Dec. 7, Bradbury was to lead a patrol, inserted into the area by Murphy and his platoon in six M113 armored personnel carriers, referred to as "tracks." Murphy and his men were to create a diversion while Bradbury and his nine-man patrol sneaked into the jungle. Neal was the patrol's radio man, and Eising a scout.

His grandfather fought for the U.S. in Vietnam. Citadel's Class of '64 paid him back.

About three hours into the patrol, Bradbury and his men came across a narrow footpath that indicated enemy presence. Sure enough, an enemy unit jumped them from behind, beginning a firefight.

"Brian took out the first VC and saved my life," Bradbury said, "the first time that day my life was saved."

The patrol headed for its rally point, but had been separated into two groups, and the radios were down. But the patrol managed to send a distress signal, and the first person to respond was Skip Murphy.

"I didn't know for sure he was coming, but I should have known he was coming," Bradbury said. "He drove through hostile territory to get to us, and that was a heroic act.

"He got to us, and went back into the jungle with us and found our missing men, who we were so grateful to see us again. And we started back to base camp."

Neal, who was wounded, was loaded into Murphy's track. The caravan was about 1,000 yards from base camp, and safety, when a command-detonated mine exploded underneath Murphy's carrier.

Bradbury, following behind in the next vehicle, still is not sure of what he saw next.

"My mind tells me I saw it, but that would have been impossible," he said. "The explosion was so big it blew us into the back of the track. But in my mind, I saw the track go up. And if what I saw really happened, it went 10 feet up in the air."

Murphy and two of his men were killed, and everyone else in the vehicle was wounded.

"It was a shocking event, because we thought we were home free," Bradbury said.

Missar, a Marine killed in action in Quan Nam Province on May 6, 1966, and Murphy were both members of The Citadel's Class of 1965, and are both buried at Arlington National Cemetery. Their classmates raised the money to erect the statue in 2005. It also honors the 76 Citadel graduates who died in Vietnam.

"When our players walk by and touch that statue, they are part of something that few other places have," said retired U.S. District Court Judge Patrick Michael Duffy, class of 1965. "When they go on that field, they should go out with dedication and determination, because these men wouldn't allow less."

Many members of 12th Infantry Recon didn't know much about Murphy before that fateful day. They didn't know he was from Florham Park, N.J.; that he'd been a Dean's List student at The Citadel; that he went from football walk-on to team captain and honorable mention all-Southern Conference; that he'd gotten married just after graduating from The Citadel in 1965.

They didn't know, either, that Missar, from Towson, Md., was an all-SoCon player on both offense and defense and an honorable mention AP All-American, or that he followed his father into the Marines, or that he had been in Vietnam little more than a month when he was killed.

But they knew what Skip Murphy did that day.

As he spoke in front of the statue, Bradbury hoped for closure, for Missar and Murphy and the 12th Infantry Recon Platoon.

"I hope that Skip can hear us and feel us today," he said. "For his honor, and the courage he displayed as a leader. Who do you thank for such people?"

WHO: Western Carolina at The Citadel