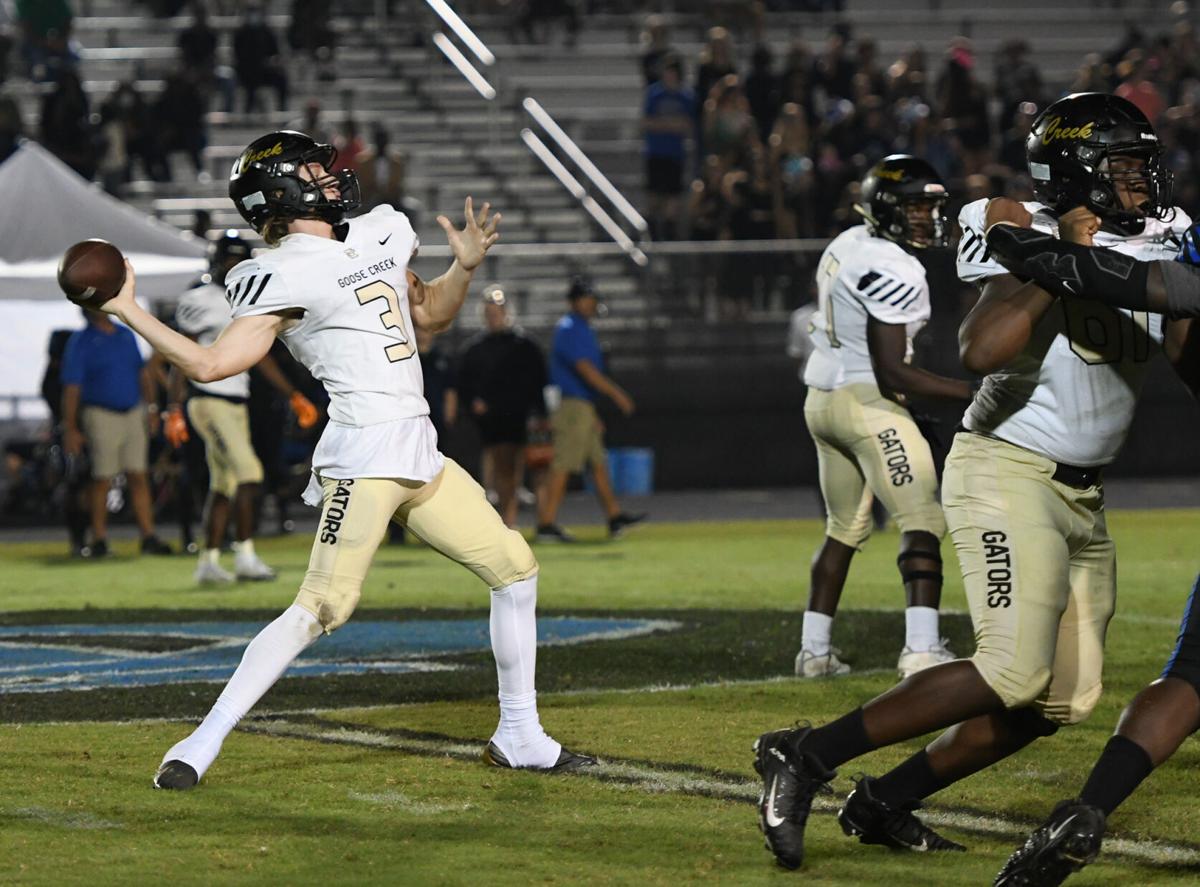 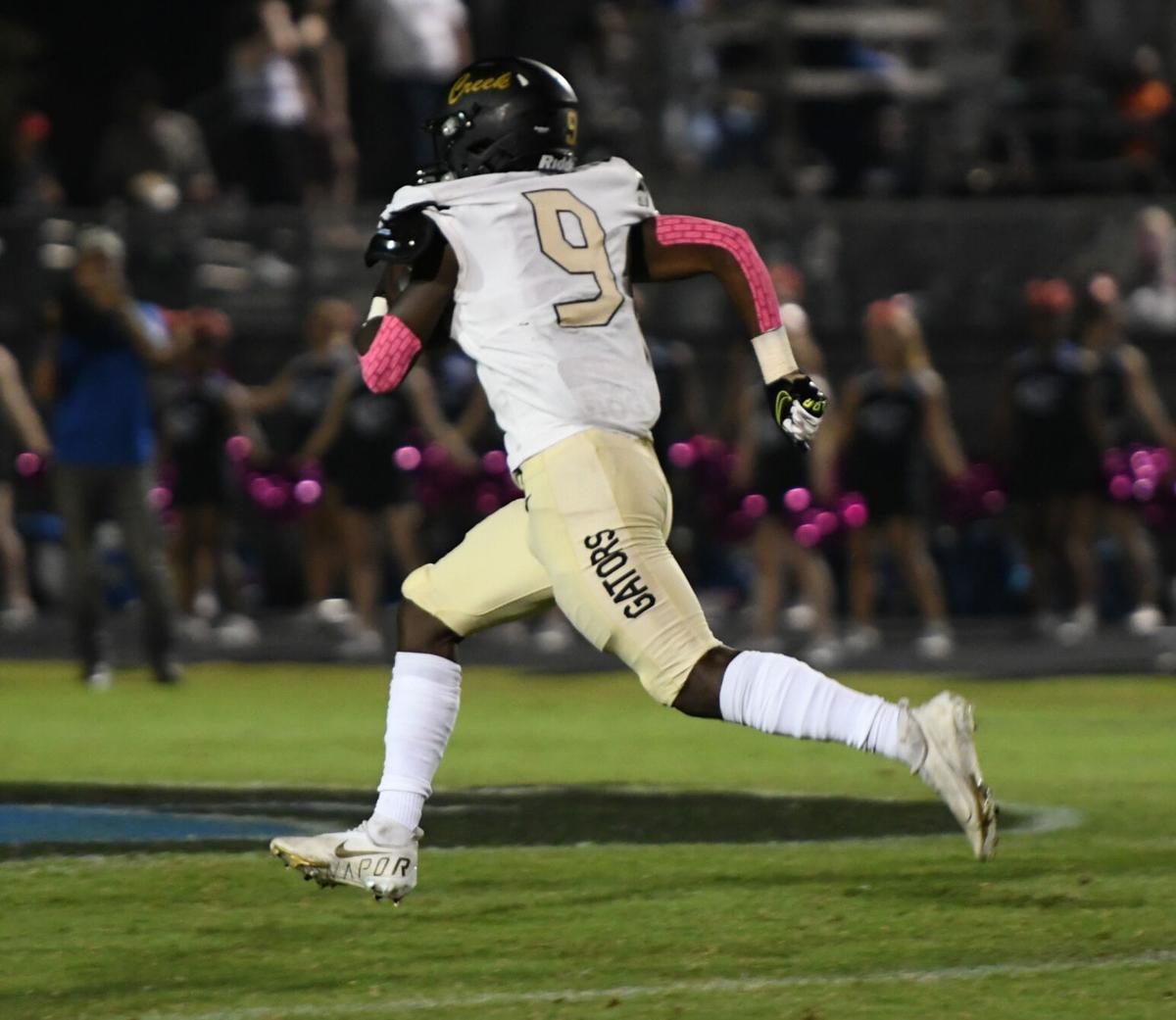 Goose Creek running back Demetri Simmons breaks free for a 71-yard touchdown run in the first quarter of a Region 7-AAAAA game at Cane Bay on Oct. 15. Rob Gantt/The Gazette 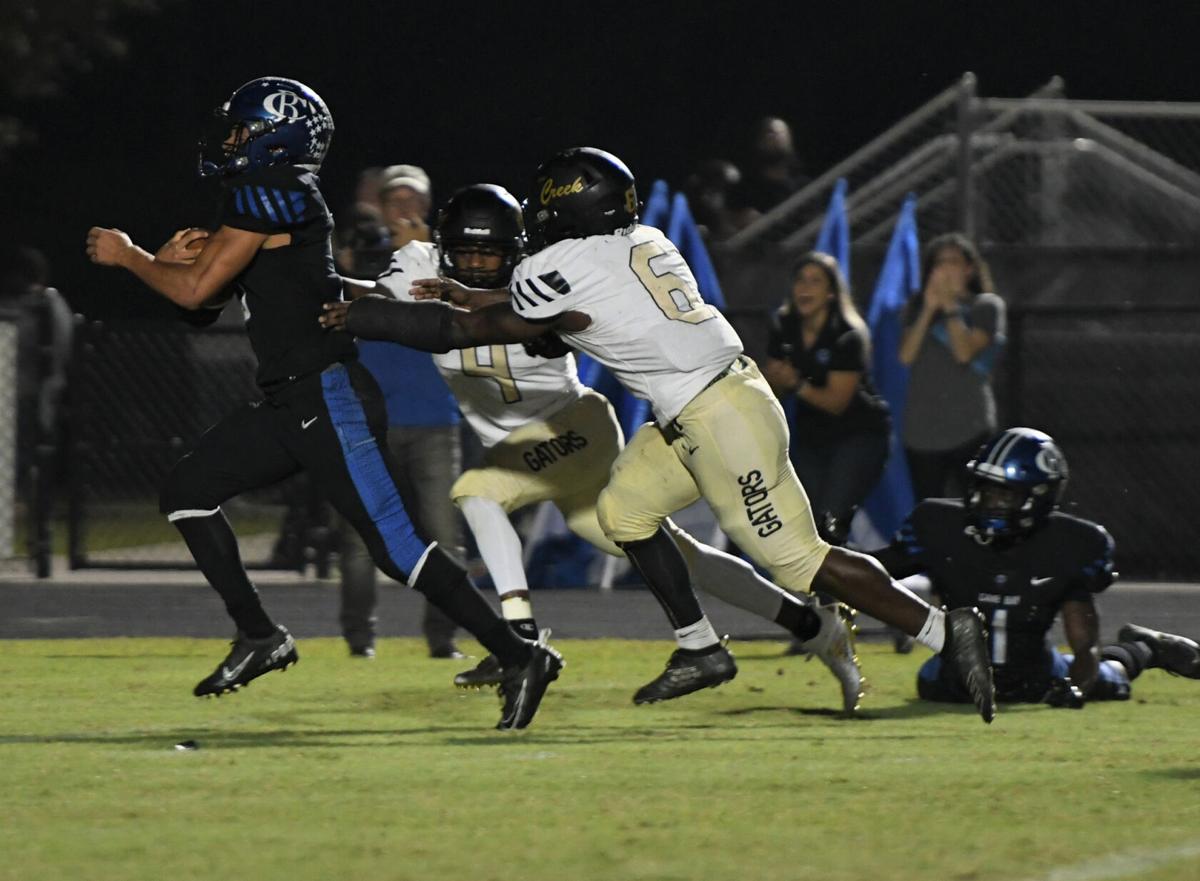 Cane Bay running back TJ Wright scores on a 29-yard touchdown run in the second quarter of a Region 7-AAAAA game against Goose Creek on Oct. 15. Rob Gantt/The Gazette

Goose Creek running back Demetri Simmons breaks free for a 71-yard touchdown run in the first quarter of a Region 7-AAAAA game at Cane Bay on Oct. 15. Rob Gantt/The Gazette

Cane Bay running back TJ Wright scores on a 29-yard touchdown run in the second quarter of a Region 7-AAAAA game against Goose Creek on Oct. 15. Rob Gantt/The Gazette

SUMMERVILLE - If there was some emotional hangover from a crushing loss a week earlier, it didn’t show on the scoreboard Friday for the Goose Creek Gators.

The Gators, coming just a few inches short of a major upset of Fort Dorchester at home on Oct. 8, had their big-play machine rolling in all three phases of a 38-13 win at Cane Bay.

“We had a good week of practice,” Gators coach Jason Winstead said. “Cane Bay is a good football team. They weren’t 6-1 for nothing. I don’t necessarily think we played our best, but the guys responded. We had some guys hurt and not in there, but we scored 38 points. Defense played a lot better.”

Goose Creek forced three turnovers, made every kick on special teams and scored on three plays over 45 yards.

Cane Bay drove down the field on its opening possession but bogged down, and a 37-yard field goal was off the mark. Two plays later, Gators running back Demetri Simmons, who went for over 150 yards, burst through the line and raced down the middle of the field on a 71-yard touchdown run. Zach Drake’s extra point was good, giving the Gators a 7-0 lead with 2:30 remaining in the first quarter.

After an exchange of turnovers, the Cobras took over near midfield and turned the short field into running back TJ Wright’s 29-yard touchdown run around the right side. However, the extra point clanked off the left upright and the Gators held a 7-6 lead with 8:48 left in the first half.

Goose Creek’s response was swift. The Gators scored in 47 seconds after starting at their own 14. Simmons ripped off a big run for 39 yards, and quarterback Drew Moore heaved a 47-yard touchdown pass to Khyon Smith in the front corner of the end zone. Drake’s extra point made it 14-6.

The Cobras were on the verge of making it out of the first half down just one possession – and receiving the second half kickoff - but coughed it up at their own 23 with 28 seconds remaining. Defensive lineman Chris Russell-Holmes pounced on it for the Gators, and Goose Creek turned into points.

Three plays later, Moore and Smith hooked up on a 15-yard touchdown strike with 10 seconds left in the half.

If that turnover wasn’t lethal for Cane Bay, the next one was. The Cobras couldn’t handle the kickoff to start the second half and lost a fumble inside their own 10. Goose Creek’s Davion Malloy was there to scoop it up and fell into the end zone for a touchdown. The extra point gave the Gators a comfortable 28-6 advantage seconds into the third quarter.

“That was huge,” Winstead said of the sequence. “If you can play good defense and score on special teams, you’re going to be tough to beat.”

Cane Bay cut its deficit to 28-13 on Jaylen Boudreaux’s 22-yard run with 11:23 left in the game and got a defensive stop but lost 14 yards on its next drive, a big sack by Gators linebacker Kavarion Brown the final blow.

The Gators iced it on Drake’s 23-yard field goal with 3:53 remaining, and backup running back Kenny Johnson tacked on the exclamation point, scoring on a 53-yard touchdown scamper with 1:12 left.

“After last week, I’m so proud of the way they responded,” Winstead said. “That was a rough one (against Fort Dorchester).”