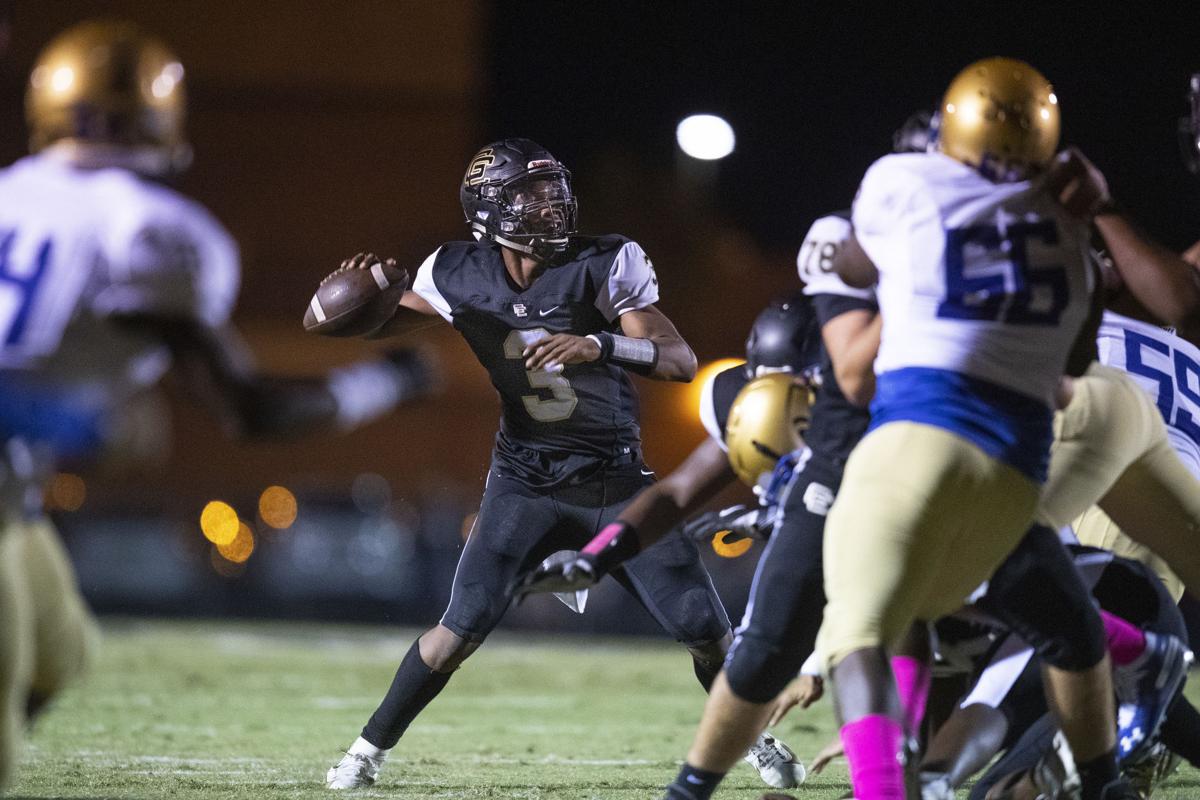 Goose Creek quarterback Emmanuel Mukuamu passed for 258 yards and three touchdowns, and rushed for 118 yards and another TD in the Gators' 35-27 victory over Berkeley last week. Lauren Petracca/Staff 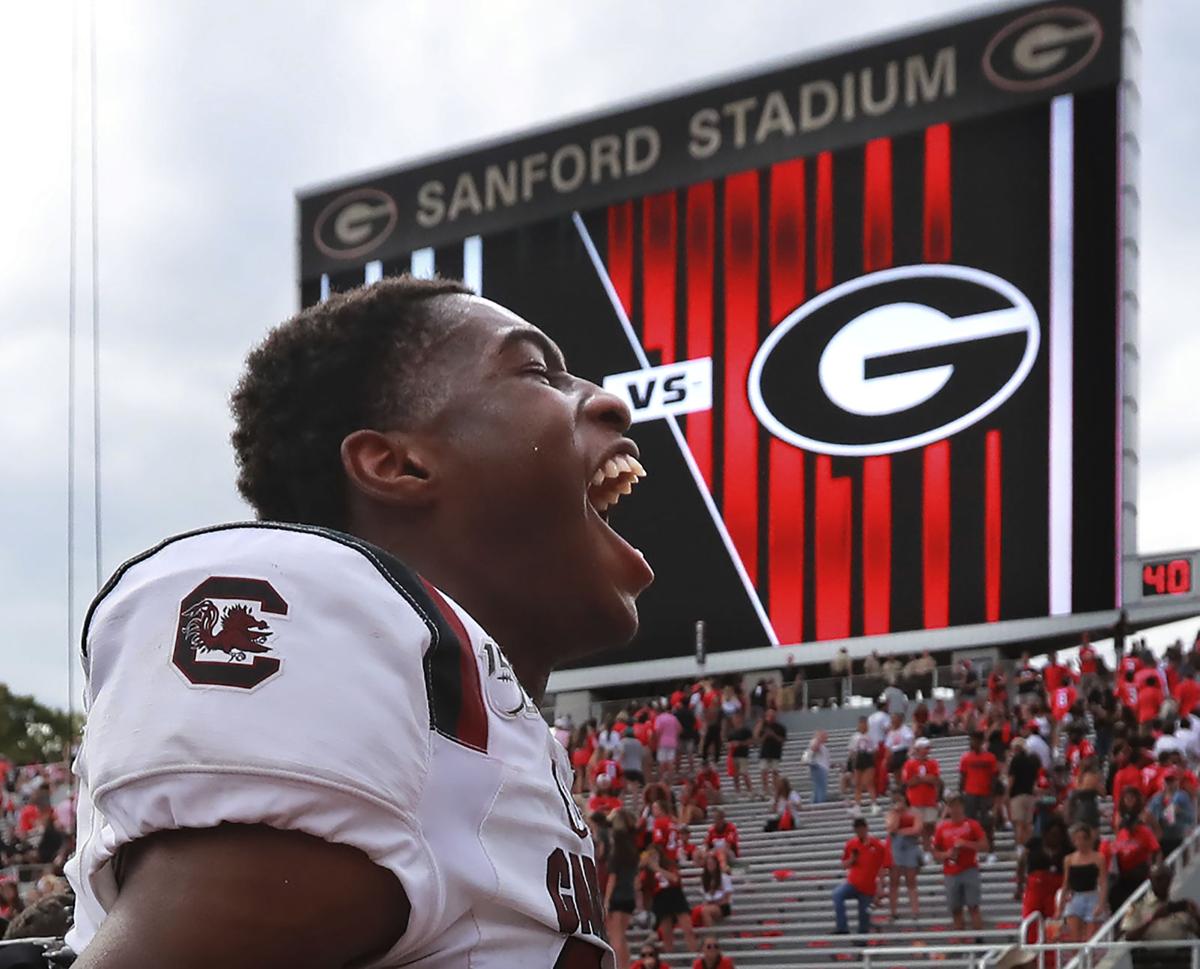 South Carolina's Israel Mukuamu was named the national defensive player of the week after intercepting three passes, returning one for a touchdown, in an upset win at Georgia on Saturday. Curtis Compton/Atlanta Journal-Constitution via AP 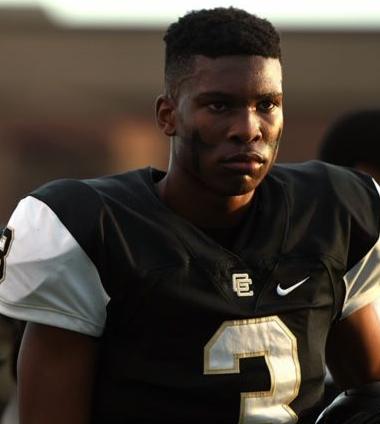 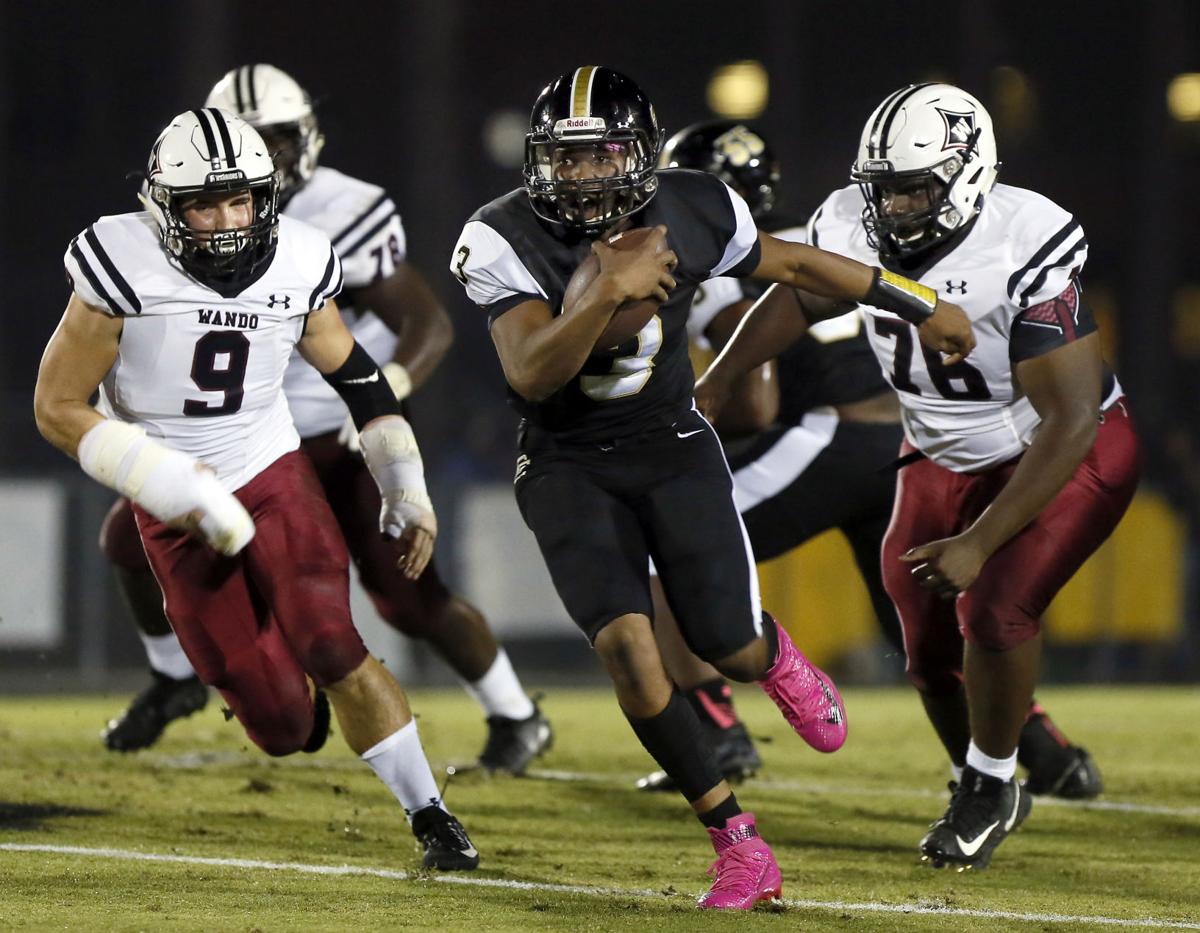 Goose Creek quarterback Emmanuel Mukuamu led his team to a 13-6 victory over Wando last season in Goose Creek. On Friday, the teams play each other at Wando in a key Region 7-AAAAA game. File/Grace Beahm Alford/Staff

Goose Creek quarterback Emmanuel Mukuamu passed for 258 yards and three touchdowns, and rushed for 118 yards and another TD in the Gators' 35-27 victory over Berkeley last week. Lauren Petracca/Staff

Goose Creek quarterback Emmanuel Mukuamu led his team to a 13-6 victory over Wando last season in Goose Creek. On Friday, the teams play each other at Wando in a key Region 7-AAAAA game. File/Grace Beahm Alford/Staff

It was a weekend unlike any other for football parents Charles and Betty Mukuamu.

Last Friday night, their youngest son, Emmanuel, led Goose Creek High School to a 35-27 upset of rival Berkeley. The senior quarterback passed for 258 yards and three touchdowns, and he rushed for 118 yards and another TD. It was Goose Creek’s first win over the Stags since 2008 and put the Gators atop the Region 7-AAAAA standings with three games to play.

Less than 24 hours later, Israel Mukuamu played a huge role in South Carolina's upset victory at Georgia, ranked No. 3 in the nation at the time. Israel, two years older than Emmanuel, intercepted three passes in the game, returning one of them 53 yards for a touchdown. He was named the national defensive player of the week along with earning SEC honors.

“Unbelievable,” said Emmanuel, known as 'Manny' to his family, friends and teammates. “I was on a college visit and was in a group chat with my brother, and he said Israel had just intercepted a pass. I was like, 'Jake Fromm doesn’t throw interceptions, that’s crazy!' I’m so happy for Israel. He works so hard to be great. We shared the same room growing up, wore the same clothes. Hanging around him taught me how to work and the discipline to put the work in every day.”

Sports has always been important to the Mukuamu family. Two older brothers, Sergio and Joseph, also enjoyed success in football. Their father was a prominent judo coach in his native Congo, serving as an Olympic coach before moving to the United States.

“Football has been a huge part of our lives for sure,” Manny said this week. “We thrive on competition, on doing things that people say can’t be done. Nobody thought we could beat Berkeley. Nobody thought Carolina could beat Georgia. Last weekend was a lot of fun.”

Though the family spent most of their time in Charlotte as kids, the Mukuamu’s moved to Moncks Corner when Israel entered high school. He played for Berkeley for three years before the family moved to Bossier City, Louisiana. Israel played his senior year there and committed to South Carolina while Manny was a backup quarterback his sophomore year.

The family moved back to the Lowcountry in early 2018 and Manny was expected to end up at Berkeley. Those plans changed later that summer.

“Berkeley had a returning quarterback (Eric Tuttle) and even though I felt confident I could compete and win the job, I knew if I sat on the sidelines as the backup I wouldn’t be happy,” Manny said.

After looking into the situation at Goose Creek, a program that was rebuilding under new head coach Jason Winstead, the Mukuamu's settled in Goose Creek. Winstead had been the defensive coordinator at South Pointe High in Rock Hill. The team won five state championships while he was there.

Manny's first practice with Goose Creek was on the Monday before the Gators' first game of the season.

“He was talented, athletic, but he had just got on campus and had no knowledge of our offense,” Winstead said. “We ended up having to play him in game one due to an injury. He wasn’t going to play. We were yelling out what to do during the game. He handled it pretty well and we knew we had a guy with a lot of potential.”

Mukaumu played throughout his junior season, and the Gators managed only four wins. But the 6-2, 195-pounder had settled into his new home nicely.

Winstead has seen dramatic changes in his quarterback’s skills and maturity since last season.

“He has taken on a leadership role and has worked really hard to be a leader by example,” Winstead said. “He has come a long way. He is seeing that people will react to him in a positive way."

Manny said he and the team are better this year, and it shows — the Gators are 4-2 overall and 2-0 in Region 7-AAAAA.

“I have more velocity on my throws, and I have improved a lot on reading the defense and hitting the check down throws when I have to,” he said. “The game is so much slower for me, really for the whole offense. We weren’t very good as a unit last year, but we have a lot of guys back and we all worked really hard to make this a great season.”

Through six games, he has thrown for 1,253 yards and 18 touchdowns. He also uses his speed and power in the running game, totaling 456 yards and six scores.

Goose Creek makes a statement with victory over Berkeley

But, as the entire Goose Creek team is well aware, the season is far from over.

“We want to be region champions. That’s been the goal since the summer,” he said. “Last week was special, but our mindset is for every week to be special. We had five steps to take. We have taken two. Now let’s go get the next three.”

Manny leads Goose Creek into a key region game at Wando on Friday night. On Saturday, Israel and the Gamecocks play ninth-ranked Florida in Columbia.

NOTES: Goose Creek can take control of Region 7-AAAAA with a win after getting off to a 2-0 start in region play … Wando can move into a first-place tie with a win … Gators quarterback Manny Mukuamu tallied more than 350 total yards and four touchdowns in last week’s upset of Berkeley … Wando is coming off a 15-7 win over Stratford in one of their best defensive games of the season … Goose Creek leads the overall series, 25-21.

NOTES: Cane Bay has won the last four meetings and leads overall, 4-3 … The winner keeps alive hopes of making the state playoffs and contending for the Region 7-AAAAA title … Stratford QB Josh Davis has passed for more than 1,200 yards this season.

NOTES: Summerville is 2-0 in Region 8-AAAAA … Summerville has won 18 of the previous 20 matchups with West Ashley … West Ashley last won in the series in 2015 … Wildcats have lost five straight since a win over James Island.