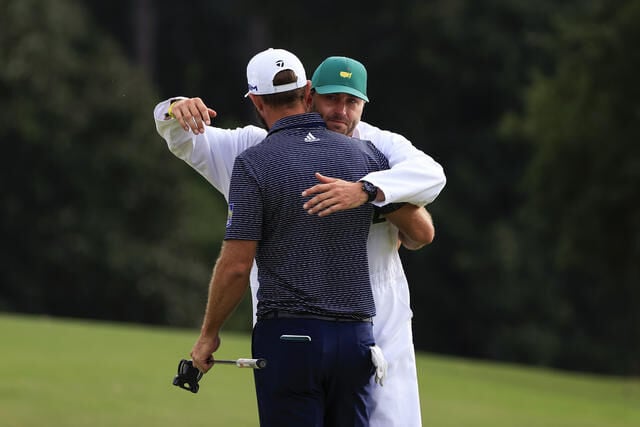 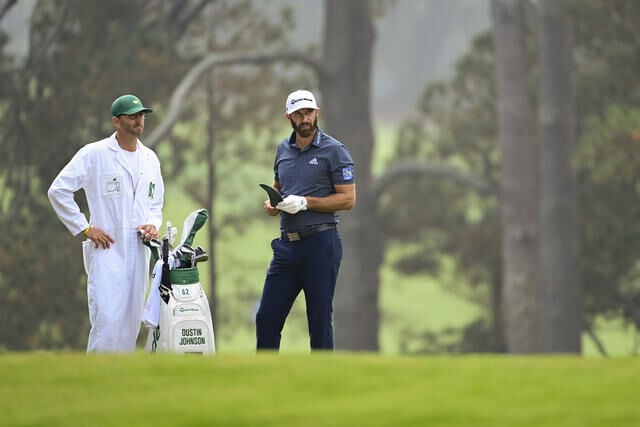 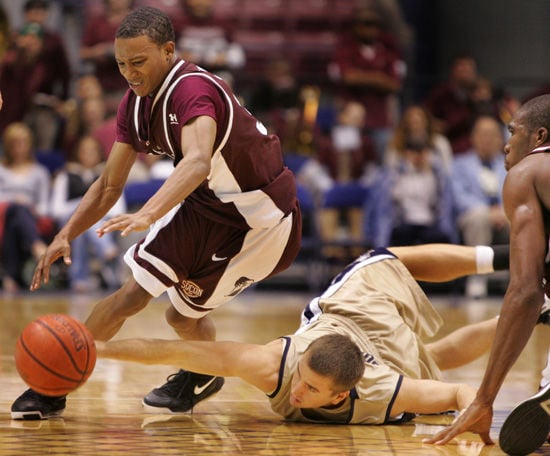 Austin Johnson dives for a loose ball while playing basketball for Charleston Southern against the College of Charleston. Johnson was tough on the court and is tough as a caddie working for his brother, 2020 Masters winner Dustin Johnson, says CSU head coach Barclay Radebaugh. File/Staff 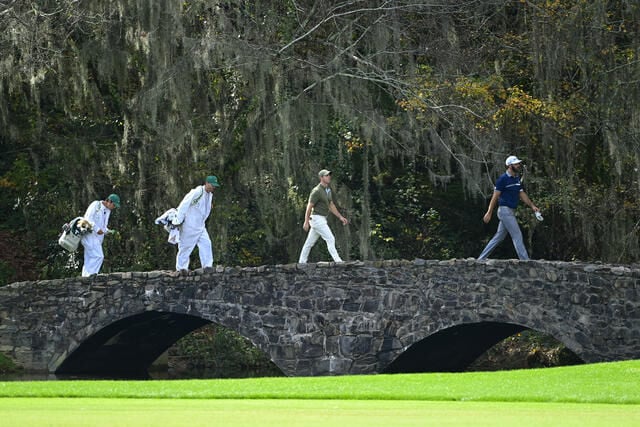 AUGUSTA, Ga. — Barclay Radebaugh watched Sunday’s final round of the Masters along with the rest of the world. He gleefully noticed how much one of his former Charleston Southern basketball players was involved in the acquisition of a nice new green jacket.

Every step of the way.

Record-breaking Masters winner Dustin Johnson again Sunday leaned heavily on Austin Johnson, his brother forever and caddie since 2013. The same guy led the Buccaneers in floor burns from diving on loose balls from 2007-2010.

“Austin caddies just like he played basketball,” said Radebaugh, CSU’s head coach since 2005. “Austin was a very hard-nosed, tough, skilled basketball player. It’s been a blast watching him as a caddie.”

As D.J. finished with a Masters low score of 268 and A.J. was the first to give him a big hug, the sports world learned something:

You mess with one Johnson brother from Irmo, you’re messing with both of them.

“It’s unbelievable having my brother on the bag,” Dustin, 36, said of Austin, 33. “I just love experiencing all these moments with him. I wouldn’t want it any other way.”

It was the strangest Masters, an event postponed by the coronavirus from April to November. For two young men who made it through their parents’ divorce and tough times as teens, this was also a wonderful story of brotherly love.

Austin hung out with Dustin in Myrtle Beach when Dustin played golf at Coastal Carolina.

Dustin came to many of Austin’s CSU basketball games.

Austin gets roughly 10 percent as the standard caddie cut, which this year includes D.J.’s $15 million bonus for winning the FedEx Cup.

They are both 6-4, just like their grandfather, former University of South Carolina basketball star Art Whisnant. Both grew up hitting thousands of golf balls into Lake Murray aside Whisnant’s house.

They live right near each other in Jupiter, Fla.

They both have smart significant others whose parents have served as mentors.

Samantha Johnson, Austin’s wife and the former Samantha Maddox, was an All-Colonial Athletic Association tennis player at the College of Charleston. She is a Florida realtor with 31,000 Instagram followers in part because she, like Paulina, posts a lot of bikini photos.

Dustin often tosses a golf ball up nonchalantly between holes. Yes, even during a major. He ambles about, walking something like a sullen gunslinger.

“Where do we stand?” Dustin asked sincerely as he was strolling up the 18th fairway Sunday.

Bro. You are leading the Masters by five shots, Austin said.

“I think I can handle that,” Dustin replied.

Just don’t you dare mistake any of this for yawns.

“He doesn’t throw clubs or curse at me,” Austin said. “That’s just because he’s a class act. It doesn’t mean he doesn’t care. I think it’s just because we’re Southern guys and we talk a little slow that everybody thinks we don’t really care. But we put in as much work as everybody else out here.”

A.J.’s deep dive into green-reading this year, for instance, and D.J. getting putting advice from Greg Norman.

Austin graduated from the College of Charleston in 2013 after he was done with basketball at CSU. He became Dustin’s caddie the same year.

But Austin is the team member who grew up battling his big brother for every layup. They remain arch-rivals in such activities as swimming pool basketball and bike riding.

“Your caddie,” Dustin said, “needs to be someone you trust.”

Tour players get a kick out of those lovable goofballs, the Johnson Bros. Alan Shipnuck of Golf Magazine wrote of the time Dustin badly missed left on a putt that was supposed to go right, explaining to Austin that — oops — he had been looking at their green-reading book upside down.

But Johnson and Johnson sure win a lot. Dustin’s career spurt directly coincided with putting Austin on the bag in 2013: 18 of his 24 PGA Tour wins since.

Austin gets honored, too. He was named PGA Tour Caddie of the Year in 2016.

The brother combo is the third family caddie team to win the Masters, joining Jack and Jack Nicklaus II (father-son) in 1986 and Patrick Reed-Kessler Karain (brother in law) in 2018.

And with no green-reading books allowed at the Masters, Austin was almost glued to Dustin on and around the notoriously wicked Augusta National putting surfaces.

It played out hole after hole in Augusta:

• Austin straddles the ideal line between ball and hole

Sapakoff: A fun, sad Augusta National walk around a Masters minus fans

“He seems to know when to get involved,” Radebaugh said, “and when to back off. They just make a great team.”

It’s surely because they are so much alike.

Austin after the Masters was over said it was pretty much the same “laid back and pretty calm D.J.” on Sunday. About like someone laying on the couch watching football, he said.

But they both were brought to tears, in the 18th fairway and when Paulina Gretzky hurried out to the 18th green to hug first Dustin and then Austin.

“I was trying to hold it back, but it was tough,” Austin said. “This is one we’ve been dreaming about, growing up just down the road.”

Brothers together way back then, brothers ruling the golf world now.