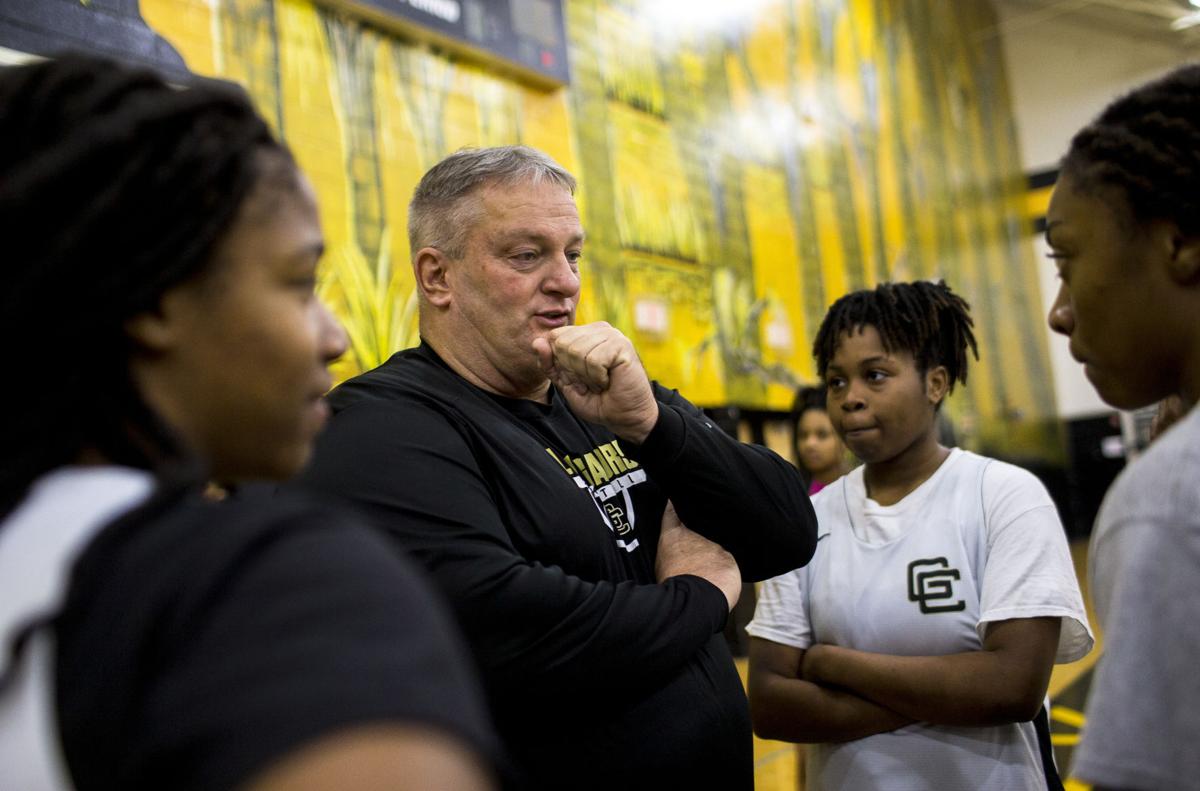 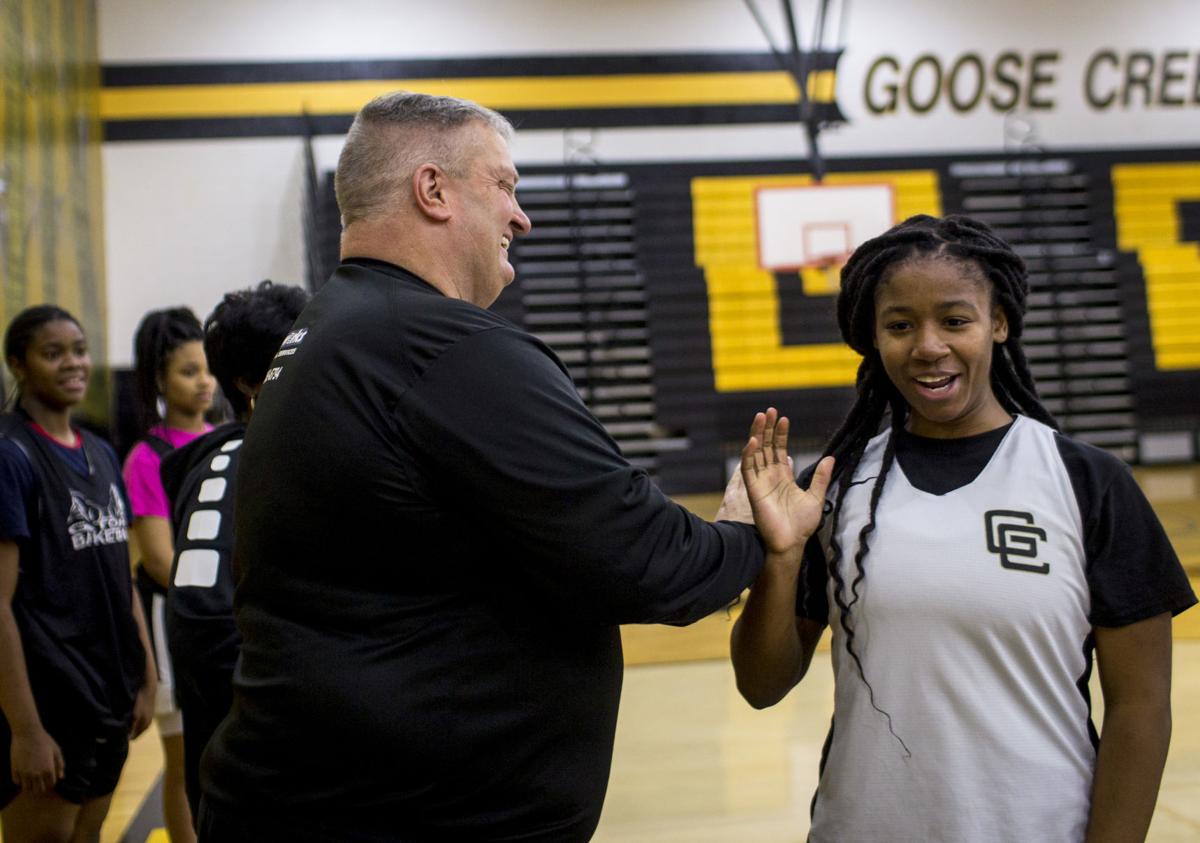 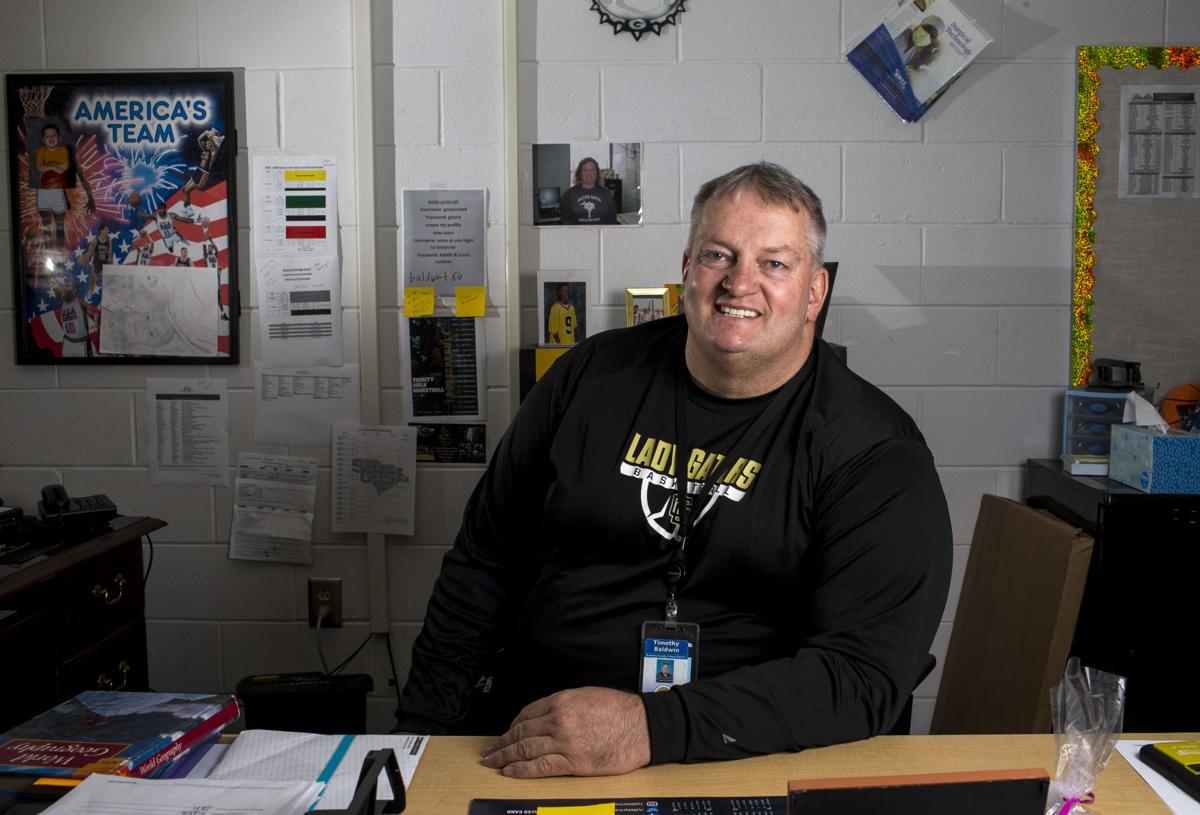 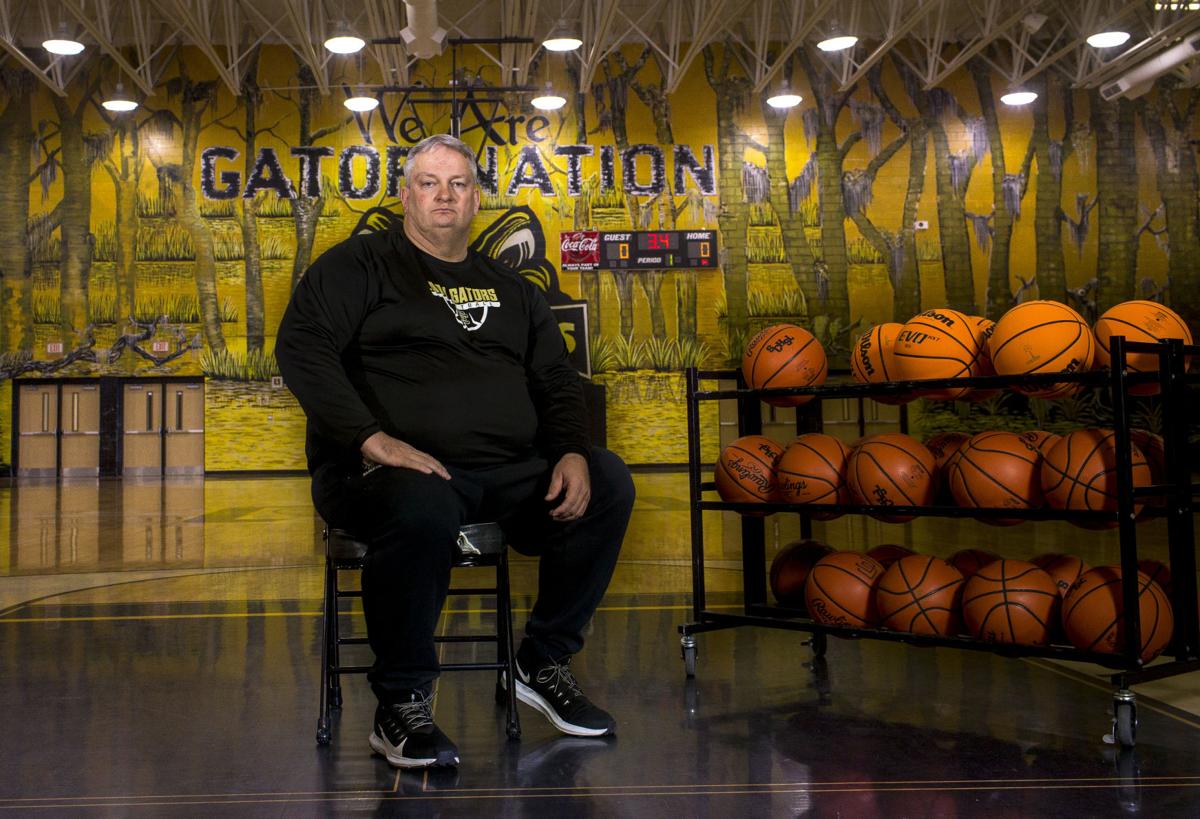 Goose Creek girls basketball coach Tim Baldwin during practice on Monday, Feb. 17, 2020 at Goose Creek High School. In addition to being a multi-time state champ, Baldwin is also known for being a well-liked educator who teaches special education and is involved in the community. Andrew J. Whitaker/ Staff 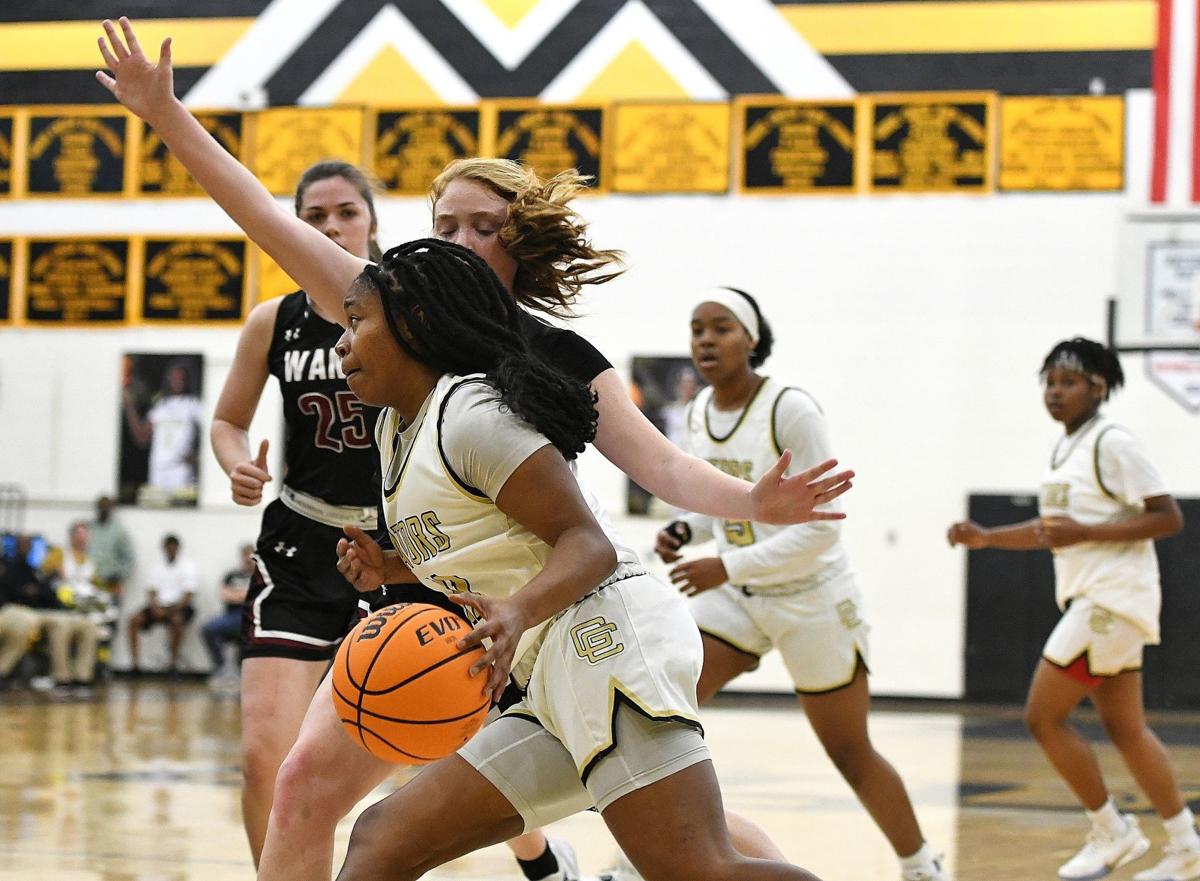 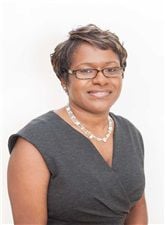 Goose Creek girls basketball coach Tim Baldwin during practice on Monday, Feb. 17, 2020 at Goose Creek High School. In addition to being a multi-time state champ, Baldwin is also known for being a well-liked educator who teaches special education and is involved in the community. Andrew J. Whitaker/ Staff

Aniyah Oliver still remembers that fateful game in 2016 when she was an eighth grader playing varsity basketball for Summerville High School.

She was dribbling the ball up the court when she heard a loud voice from the opposing team's bench, where the coach was frantically yelling instructions to his players.

The passion displayed by the Goose Creek coach stuck in Oliver's mind. She knew she had to play for him.

One year later, Oliver was doing just that. She was a freshman on coach Tim Baldwin's girls basketball team at Goose Creek.

That same season, the Gators captured a state championship.

Now a senior at Goose Creek, Oliver couldn't be happier about her decision to play basketball for Baldwin and the Gators. Goose Creek has won state titles in two of the last three years, and is three victories away from another after beating Ashley Ridge Friday in a 53-38 contest.

The Gators will play River Bluff Monday for a chance to go to the Class AAAAA semifinals.

Oliver said plenty of faces have changed on the basketball team in her four years, but Baldwin has remained exactly the same.

“He’s very loud and he’s going to get his point across,” she said before a recent practice. “But that’s why we love him.”

Most people know how Baldwin’s dedication and philosophy plays out on the basketball court; another championship would be his fourth since 2010.

He is committed to finding and bringing out the best in his players so they can succeed. And that same philosophy applies to his students. Baldwin has been teaching special needs children at Goose Creek for 25 years.

Baldwin, 51, wasn’t supposed to be teaching special education or coaching girls’ basketball. In 1994 he wanted to use his degree from Charleston Southern to teach math and coach boys basketball.

He was offered a position teaching special needs kids at Goose Creek High. The job allowed him to coach boys basketball and stay close to home. Baldwin has lived in Goose Creek since he was in the third grade.

“I got certified and went for it,” he said. “And I fell in love with it. I feel like I’ve been an underdog my whole life, coming from a family with seven kids. So working with kids who may struggle in certain areas. ... I think I can help them.”

That’s exactly what Goose Creek principal Shameka Washington sees in one of her favorite teachers. Washington became principal at the school in 2017 but has known Baldwin since 2008, the year she became a special education administrator there.

Over the years, she’s seen how Baldwin mentors and cares for his students.

And she’s never seen the coach raise his voice in emotional moments, whether on the court or in the classroom.

“When you’re working with special needs kids, three students can feel like 30,” she said. "But Tim has always had patience for our kids and helps them reach goals they didn’t realize they could reach.”

Time for a change

Ahead of the 2002 season, Baldwin was asked to switch from coaching boys basketball to take over the girls team, which had been struggling and was in need of a fresh start.

Baldwin, a native of Hoganville, Ga., had never coached girls but agreed to give it a try. That first season the Lady Gators posted their first winning record in years and made the playoffs.

The next season, Baldwin called on Lynda Wright to join him as an assistant. He knew Wright as a basketball coach at the local recreation center and thought she’d be a good fit for the team.

Likewise, Wright’s son had played under Baldwin for a few years, so she knew what type of coach he was.

“He understands that every kid isn’t the same," she said. “So he connects with them on an individual level and that helps them understand how they fit into the team.”

Wright said Baldwin's ability to connect with his players also applies in the classroom.

“With both, you need compassion and accountability,” Wright said. “He helps all of these kids embrace the challenges ahead of them, and work as hard as they can."

All in the family

All of the students in Baldwin’s class know his basketball players, who regularly pop in to visit.

Creating that family environment has produced success for those around Baldwin — in both areas. As a mentor, he's helped a countless number of students graduate from Goose Creek over the years, Washington said.

On the court, Baldwin has led the basketball team to state championships in 2010, 2017 and 2019. The first was a Class AAAA title; the last two were at the Class AAAAA level.

Baldwin and Wright know where to look for future players. They frequent the recreation center to identify players who are dedicated and driven to be their best. The skills are important, but not as much as the desire.

“I just want to see them trying their hardest,” Baldwin  said. “I’d rather work with a child who may not be as gifted but is doing the best they can, than someone who has all the talent in the world but isn’t willing to put in the work.”

Oliver, who will be playing college basketball next year at Francis Marion, is hoping to give her coach another state championship before she leaves. Teammate and fellow senior Kolina Adams wants the same thing.

“It would be so awesome to go out on top like that,” Adams said. “That’s why we work so hard in practice. We want to do it for ourselves and for Coach Baldwin.”

As for the future? He tries not to look too far ahead, especially since he’s happy with his current situation.

However, Baldwin admits that occasionally he wonders how much gas he has left in the tank. His love for education and basketball can feel like an emotional rollercoaster. At some point he has to unbuckle his seatbelt and get off the ride.

But for now, he’s doesn’t see an end in the immediate future. Besides, if things go his way in the next couple of weeks, he'll have another state championship with a chance to three-peat in 2021.

“As long as we work hard, we’ll live with the results,” he said. “But we give it our all out there. You don’t hang banners by being lazy.”