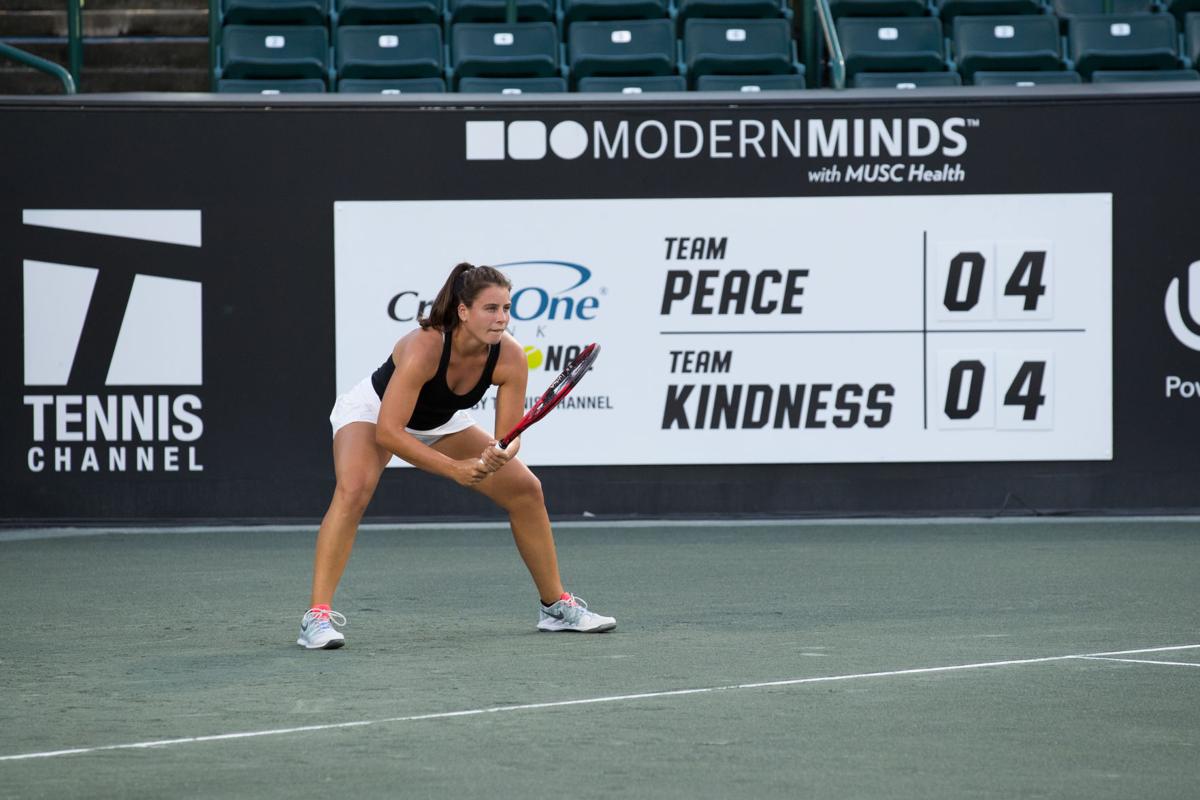 Charleston's Emma Navarro readies for a return in the Credit One Bank Invitational on Daniel Island this week. Sarah Thacker/Special to The Post and Courier 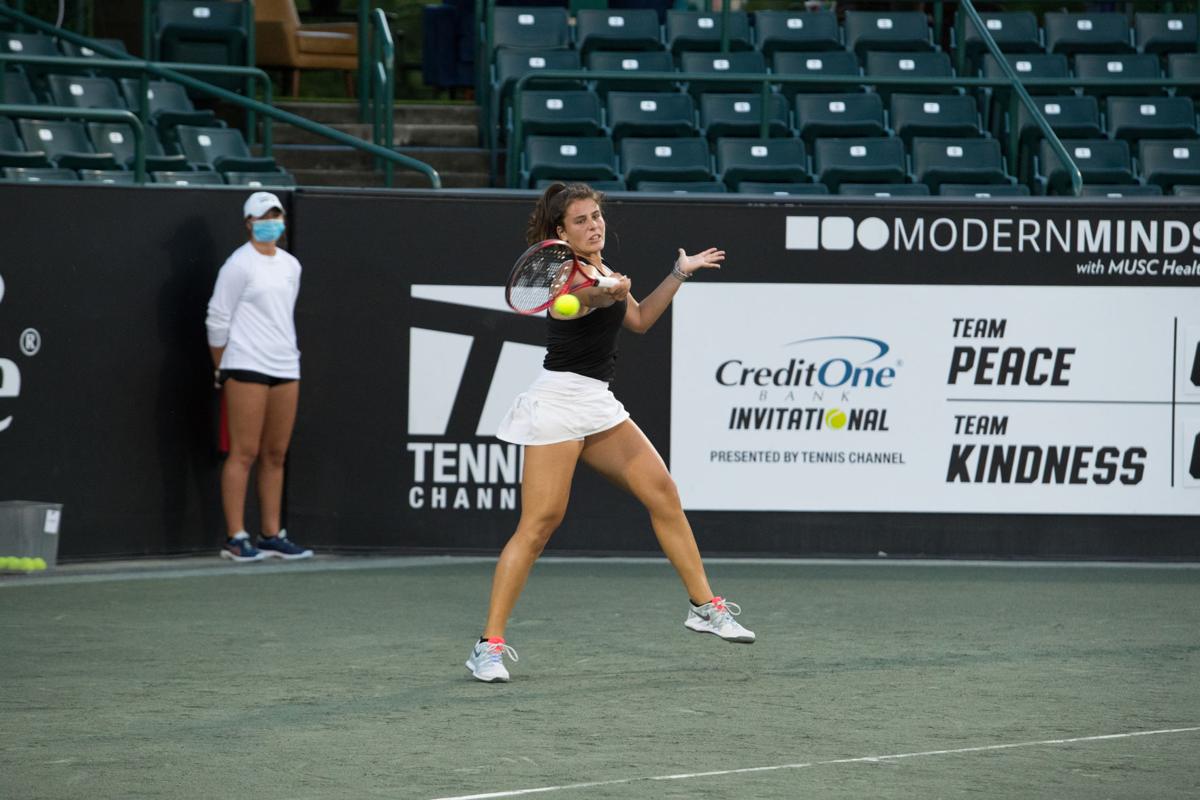 Charleston's Emma Navarro belts a forehand in the Credit One Bank Invitational on Daniel Island this week. Sarah Thacker/Special to The Post and Courier

Charleston's Emma Navarro readies for a return in the Credit One Bank Invitational on Daniel Island this week. Sarah Thacker/Special to The Post and Courier

Charleston's Emma Navarro belts a forehand in the Credit One Bank Invitational on Daniel Island this week. Sarah Thacker/Special to The Post and Courier

The No. 19-ranked player on the WTA Tour gutted out a tough victory over Emma Navarro on Thursday night, then slipped on a pair of headphones to tell Tennis Channel all about it.

"The world better watch out for her," Alison Riske said of the 19-year-old Navarro, a Charleston resident and new graduate of Ashley Hall School. "She's coming, and I personally think she's the real deal."

She and her husband just bought a house in downtown Charleston, and the 29-year-old Riske is a new friend, hitting partner and mentor for Navarro, who is playing this week in the Credit One Bank Invitational on Daniel Island.

The 16-player, exhibition team event was put together by Navarro's father, Volvo Car Open owner and Charleston businessman Ben Navarro, and VCO tournament director Bob Moran as a return-to-tennis event after the coronavirus pandemic shut down the WTA Tour in March. The Volvo Car Open, set to celebrate its 20th year in Charleston, was canceled in April.

For Emma Navarro, the week has been a chance to hobnob with — at acceptable social distances, of course — and practice and play against some of the top players on the WTA Tour. Those include her Team Kindness teammates Madison Keys and Sloane Stephens, both winners of the Volvo Car Open.

The experience is crucial for an aspiring pro who is headed to the University of Virginia in the fall as the top college recruit in the country.

"Every match that Emma can play in, whether an exhibition or in a WTA tournament, is such invaluable experience for her," tennis legend Tracy Austin said on Tennis Channel during the Navarro-Riske match.

Navarro opened the week with a 6-4, 6-0 loss to Canadian teen sensation Leylah Fernandez, who beat Navarro in the Junior French Open final a year ago. Navarro bounced back to push Riske to a match tie-breaker on Thursday night before falling by 7-6, 4-6 (10-7).

On Friday, Navarro teamed with Jennifer Brady to take on fellow Charlestonians Shelby Rogers and Riske in a "Chucktown Throwdown" of a doubles match.

"It's definitely been a good experience," said Navarro, who teamed with Chloe Beck to win the doubles title at the 2019 Junior French Open in Paris. "Especially playing against Alison, because she is such an experienced player. It's always a learning experience when you play veteran pros like that, and I was happy with how I was able to perform."

Against Riske, Navarro won an impressive, 10-minute game in the second set to hold serve for 3-3, then broke Riske’s serve on the way to taking the second set. In the 10-point tie-break, Riske took a 5-1 lead before Navarro won six straight points.

Riske, who has won two WTA Tour singles titles, finally took control by winning four straight points, and took the victory on her second match point with a backhand to the corner.

"She's been able to play against some of the best players in the world, and to see where she stacks up," said Navarro's coach, Peter Ayers. "You learn a lot from that, and in this case, I think she's learning that she's able to hang in there, and that she can compete at that level."

For Navarro, it was a step up from her opening match against Fernandez.

"I felt like I had the ability to get the win (against Riske), and I didn't," she said. "That's always tough, but it's part of it. I've been training really hard these past few months, so I was happy to see how I was able to translate that to the court."

The past few months have been unusual for Navarro, who had to finish up her senior year at Ashley Hall with on-line classes; a graduation ceremony of some kind is set for August.

Just like pro tennis, junior tennis has been shutdown by the pandemic, leaving Navarro to train at home as best she can.

"I've been working on kind of everything, as usual," she said. "My forehand, and my serve as well. I changed my motion a little bit on my serve, but I've tried to work on everything, and I feel like we made a lot of progress."

The addition of Riske as a friend and hitting partner has been key, as well.

"She moved to Charleston in April, I think, and we started hitting together," Navarro said. "And that's been really great for me. She's awesome to with with, and she's great on and off the court. She's been over to our house for dinner with her husband, and he's awesome, too.

"Alison has really gone out of her way multiple times to help me, to give me advice, and I'm really grateful for that. It's been super helpful."

After this event, Navarro will begin preparing for her college career at Virginia. Her brother, Earl, will join her there after transferring from Duke. They plan to be roommates.

"I think it will work," Navarro said. "I'm optimistic. He likes to cook, so I will make him cook and I will clean up. So it will be good."