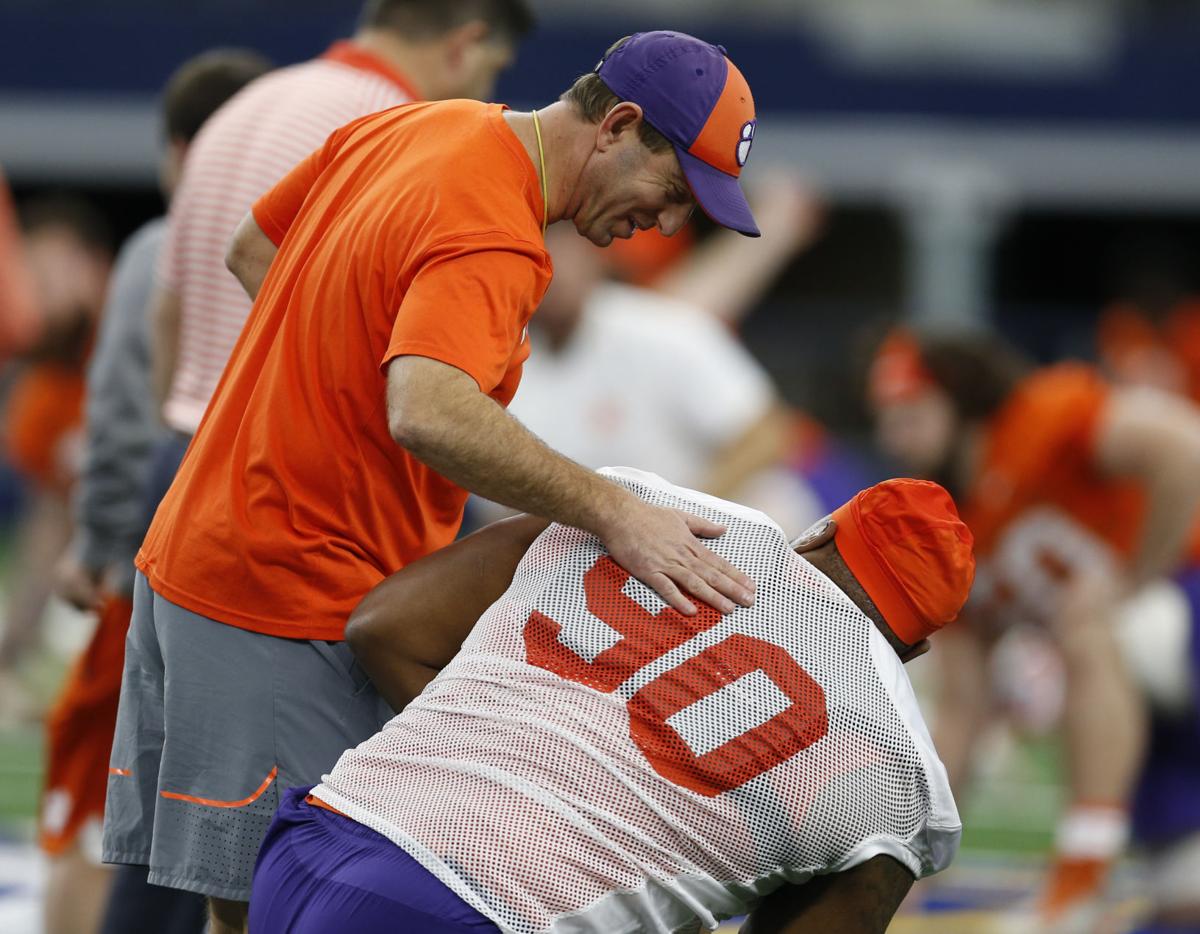 Clemson head coach Dabo Swinney talks with defensive tackle Dexter Lawrence during practice at AT&T Stadium in Arlington, Texas, last month ahead of the Cotton Bowl. Lawrence was ruled ineligible for the game after testing positive for ostarine. File/Jim Cowsert/AP 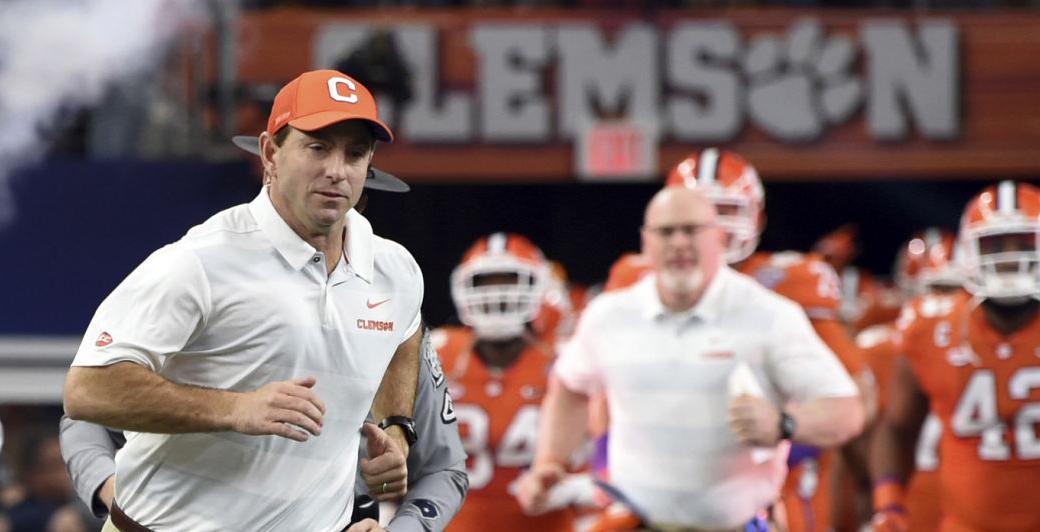 Clemson head coach Dabo Swinney jogs onto the field for the start of the Cotton Bowl against Notre Dame on Dec. 29 in Arlington, Texas. Three Clemson players were ruled ineligible prior to the game after testing positive for ostarine. Jeffrey McWhorter/AP

Clemson head coach Dabo Swinney talks with defensive tackle Dexter Lawrence during practice at AT&T Stadium in Arlington, Texas, last month ahead of the Cotton Bowl. Lawrence was ruled ineligible for the game after testing positive for ostarine. File/Jim Cowsert/AP

Clemson head coach Dabo Swinney jogs onto the field for the start of the Cotton Bowl against Notre Dame on Dec. 29 in Arlington, Texas. Three Clemson players were ruled ineligible prior to the game after testing positive for ostarine. Jeffrey McWhorter/AP

CLEMSON — Medical experts this week cast doubt on some of the theories laid out by Clemson as to how three football players, including star defensive tackle Dexter Lawrence, tested positive for the banned substance ostarine prior to the College Football Playoff.

In a press conference before the Cotton Bowl last month, Clemson coach Dabo Swinney said the drug could have come from any source. The players were ruled ineligible for the Tigers' Cotton Bowl matchup with Notre Dame and the national championship game, which Clemson won in a one-sided victory over Alabama.

"Literally, it could be a drink – something in a drink. It literally could be anything, as I have come to learn."

It is highly unlikely the players were exposed to ostarine through bathroom products or other everyday household items, according to experts. However, they said Swinney is correct that his players could have ingested the drug from an online product or some sort of supplemental protein.

Asked specifically how someone obtains ostarine, Dr. Amy Eichner, Special Advisor on Drug Reference & Supplements at the U.S. Anti-Doping Agency, said the product is illegal and has not been approved for human use by the FDA.

She said there are "no acceptable benefits of using ostarine that outweigh the risks for athletes" and there are "no legitimate therapeutic reasons for a healthy athlete to use ostarine," which is a selective androgen receptor modulator, or SARM.

"Ostarine can only be obtained illegally over the Internet or in some illegal dietary supplements. It is not an approved medication, so it cannot be prescribed by a doctor," Eichner said. "The factories that make ostarine and then sell it on the Internet or as an ingredient to supplement companies are doing so illegally.

"Unfortunately, there are a lot of chemical factories that don't care about laws or safety of consumers and sell it anyway. Some supplement companies even deliberately spike their products with high doses of ostarine while other dietary supplements are contaminated — probably accidentally — with low levels of it.

"Either way, athletes have continued to test positive for ostarine and USADA issued a warning about it in hopes of preventing ostarine-related violations."

Ostarine is considered a performance-enhancing drug, but there is still much medical experts don't know about it. Eichner said more clinical trials are necessary because at this point no one knows what would be considered a safe dose of ostarine, though small doses do appear to be "fairly safe."

The FDA announced in October of 2017 that it had sent warning letters to Infantry Labs, LLC, IronMagLabs and Panther Sports Nutrition "for distributing products that contain SARMs" and required some sort of response within 15 days. SARMs, the FDA warned, have been known to increase risks of heart attack, stroke and liver toxicity.

Ostarine was developed with the initial intention of having the same muscle-building effects as anabolic steroids but without the dangerous side effects, Eichner said. The drug is supposed to increase bone and muscle density.

Dr. Nick Connors, an emergency medicine physician at the Medical University of South Carolina with expertise in toxic/banned substances, said ostarine one day might prove to be an effective medication for elderly patients with osteoporosis or wasting, which refers to losing weight and muscles weakening.

It is very possible, both experts indicated, that the football players could have taken the drug without knowing it. But intentions are irrelevant when NCAA drug tests are administered and B samples for each player corroborated initial samples.

"If they've gone through the ingredients and it’s not listed, they're being tricked in a way," Connors said of one possibility. "The company producing it is not being upfront."

An NCAA official told The Post and Courier that on average 1,100 athletes per year are screened for drugs at championship events, and on average fewer than 10 per year test positive for the category ostarine falls under. Those numbers do not include the 2018-19 season numbers, which would include the Clemson players.

Previously, the most prominent athlete suspended by the NCAA for ostarine was former Arizona basketball star Alonzo Trier, who had the drug in his system in both 2016 and 2018. Trier's lawyer said that in the 2016 case, the now New York Knicks guard unknowingly consumed a drink with ostarine in it given to him by his stepfather. He was later ruled eligible to play once the drug was out of his system.

At Clemson, Lawrence and freshman tight end Braden Galloway each had documented foot injuries, though Connors said he could not think of a reason why ostarine would help them in that regard. He said many college programs have adopted a policy of avoiding supplements entirely because of the inherent risk of not knowing what could be in them. Clemson players are instructed to receive approval from trainers before they take any supplements on their own.

Clemson has yet to complete, or make public, findings from an internal investigation into how the players ended up with ostarine in their bodies. The school has appealed the NCAA suspensions.

Lawrence is off to the NFL and should not be dramatically affected, given his first-round talent.

But Galloway and redshirt junior offensive lineman Zach Giella are facing a one-year suspension if the appeal is not successful.

"Most appeals for amphetamines are approved when there is an approved indication that has been documented," said the NCAA's Christopher Radford, associate director of public and media relations. "Each year, there are one to three successful appeals for anabolic agents and anti-estrogens."

Clemson was given 45 days from the week of the Cotton Bowl (Dec. 29) to appeal and has said it still does not know where the drug came from.

Robert Tauler, a Harvard-educated lawyer who specializes in trying to hold companies accountable by eliminating ostarine from the market, said Clemson could, and should, use this as an opportunity to educate itself.

Ostarine is thought to come from China and is exported in bulk to the United States in mislabeled containers, Tauler said. The materials, he added, are sent to what he calls "criminal enterprises with four to six people."

"I think there are a lot of misconceptions about the marketplace and I feel bad for these kids," said Tauler, who believes there is an 85 percent chance the Clemson athletes ingested the materials unintentionally. "I think people need to do more in the NCAA, do more to understand. Clemson is in a position to devote its resources to helping other students nationwide.

"With all the money won from the national championship, for crying out loud, they should use that for a positive purpose."