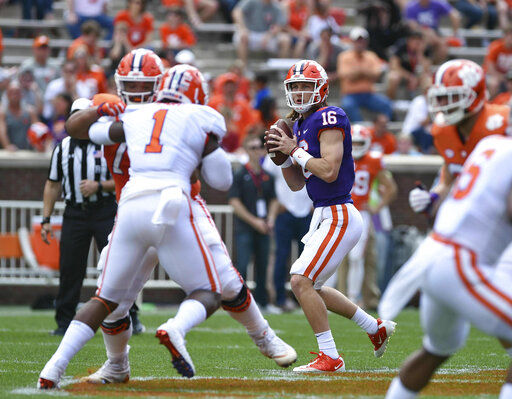 Clemson's Trevor Lawrence (16) drops back to pass during Clemson's annual Orange and White Spring Game on Saturday at Death Valley. Lawrence competed 19 of 34 passes for 232 yards and a touchdown. AP Photo/Richard Shiro 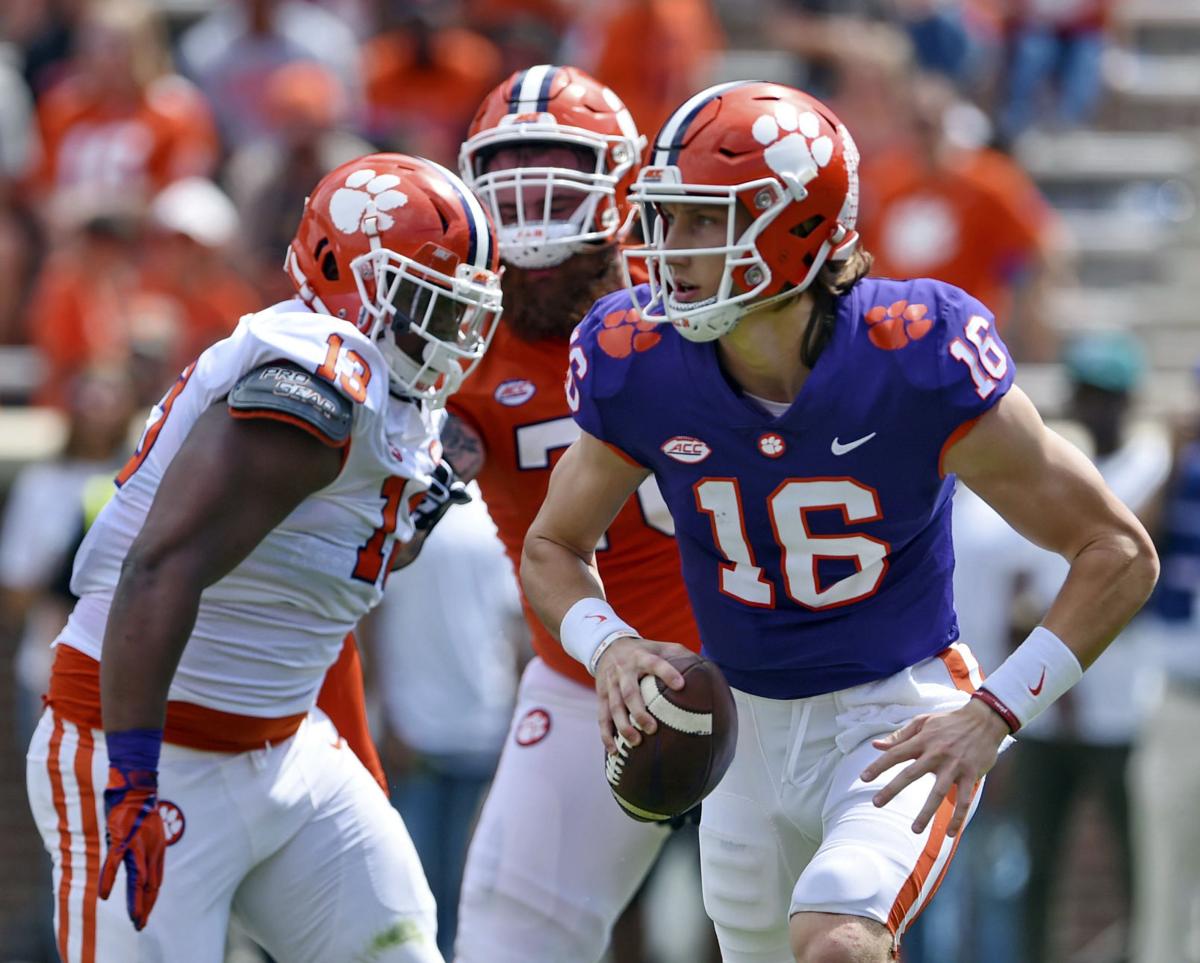 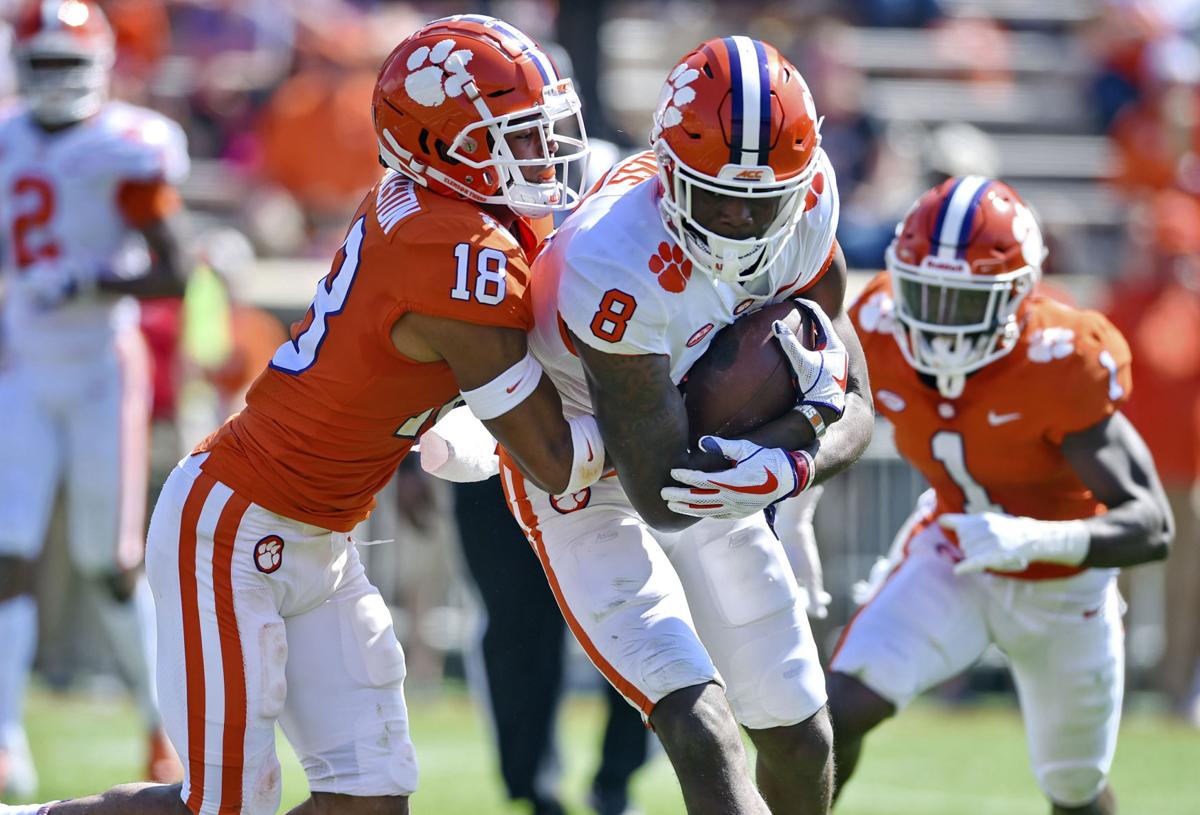 Clemson's Trevor Lawrence (16) drops back to pass during Clemson's annual Orange and White Spring Game on Saturday at Death Valley. Lawrence competed 19 of 34 passes for 232 yards and a touchdown. AP Photo/Richard Shiro

CLEMSON — While almost every other college football team presents a spring game atop a fragile plate of 2019 hope, Clemson serves up a hearty meal.

With desserts, both fresh and leftover.

Dabo Swinney’s Tigers on Saturday went through the usual drill — White defeating Orange 30-10 before a loud Death Valley crowd of 60,000. But this time with seniors and NFL-bound juniors getting their national championship rings during a halftime ceremony.

“This team had a vision from Day 1 to be the best ever,” the head coach said, aiming words at younger players. “They don't put championship rings on smooth hands; you’ve got to put the work in."

Swinney hinted that Alabama was the title favorite for all of 2018 before he emphatically dropped the mic.

Otherwise, Clemson wasn’t about to show season-opening opponent Georgia Tech too much. Still, quarterback Trevor Lawrence and pals re-emphasized why it’s so hard to cover all of Clemson’s skill talent while a defense with seven new starters had its moments.

• Run defense. The two teams Saturday combined for 2.2 and 1.8 yards per carry, respectively. Maybe that says something about front seven upside.

• Kicking competition. Steven Sawicki might be ready to press expected starter B.T. Potter in a battle to replace Greg Huegel for field goal duties. The senior went 3-for-3 with field goals of 25, 43 and 43 yards, while Potter nailed a 30-yarder on his only attempt.

• Derion Kendrick. The rising sophomore might start at cornerback after subbing in when there were injuries this spring. Or wide receiver. Or both. Saturday, Kendrick made three tackles, caught a pass, returned two punts and handled two kickoffs.

• Tyler Davis. The 6-1, 290-pound freshman isn’t the next Christian Wilkins but is potentially something of a force at defensive tackle. Defensive coordinator Brent Venables loves the precociousness as much as the ferociousness. Davis had only one tackle Saturday.

• The big crowd. “I can’t say what a blessing that is and what an awesome tool that is to be able to teach and develop our team,” Swinney said. “… You can’t assimilate that in practice, no matter how hard you try.”

• Eagerness. “This is a new team,” Lawrence said, repeating what Swinney said after the first day of spring practice. “This is a hungry team.”

“They have to make the most improvement between now and August,” Swinney said. “And they will because they’re committed.”

• Close on DJ Uiagalelei. The 6-4, 240-pound quarterback from Bellflower, Calif., isn’t committed to Clemson, yet. But Uiagalelei, the prize passer of the 2020 signing class, was on hand again Saturday, this time with his family (and several other top-rated recruits). Indications are that Uiagalelei will pick the Tigers over Oregon sometime before June.

But Clemson got a prime commitment Saturday from RJ Mickens, a safety from Southlake, Texas, who is ESPN’s No. 58 overall 2020 prospect.

Mickens is the son of former NFL cornerback Ray Mickens. He picked Clemson over Alabama, Texas A&M and LSU, among many other offers.

7 things to look for in the Clemson football spring game

Clemson won't show much in its annual Orange and White Game but a trained eye can spot a few critical trends going into the defending national champs' 2019 season.