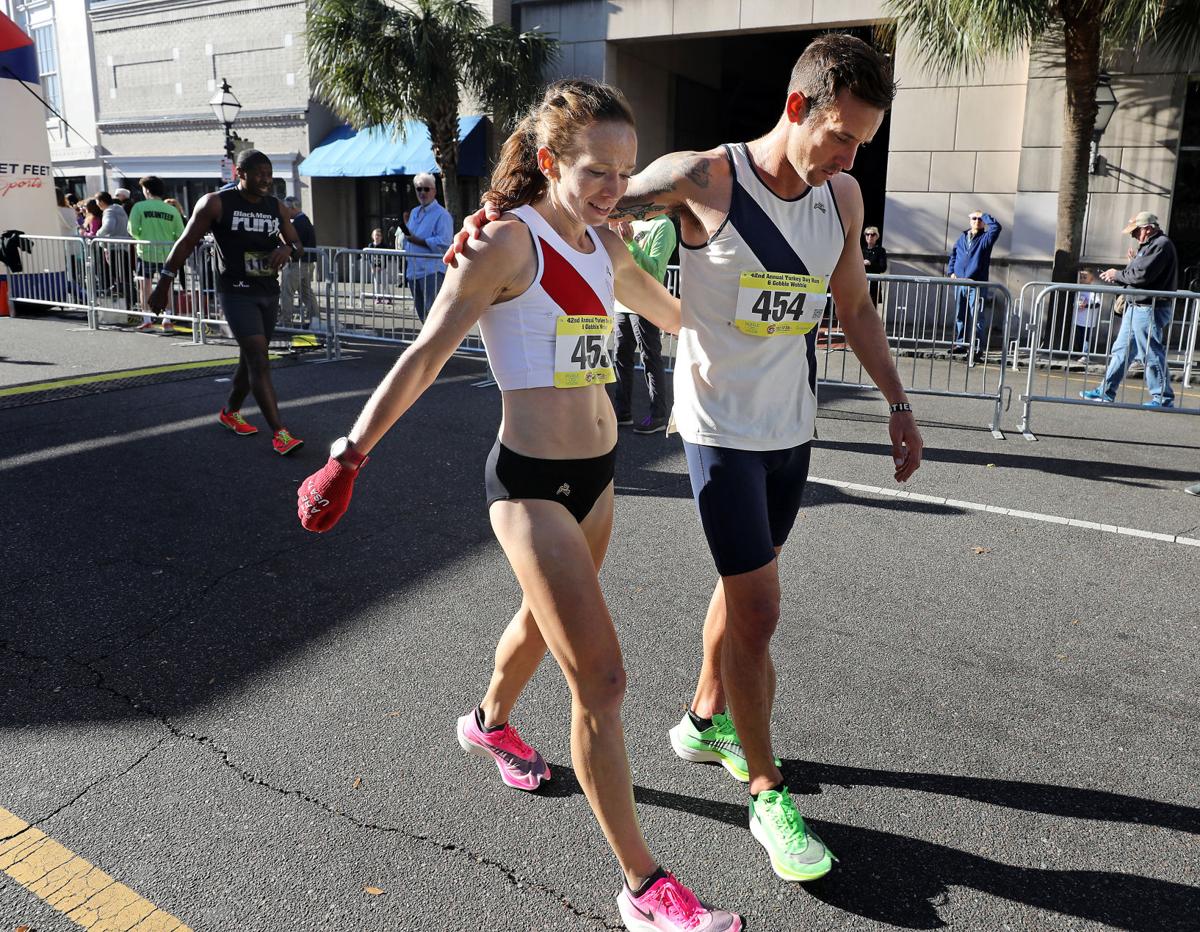 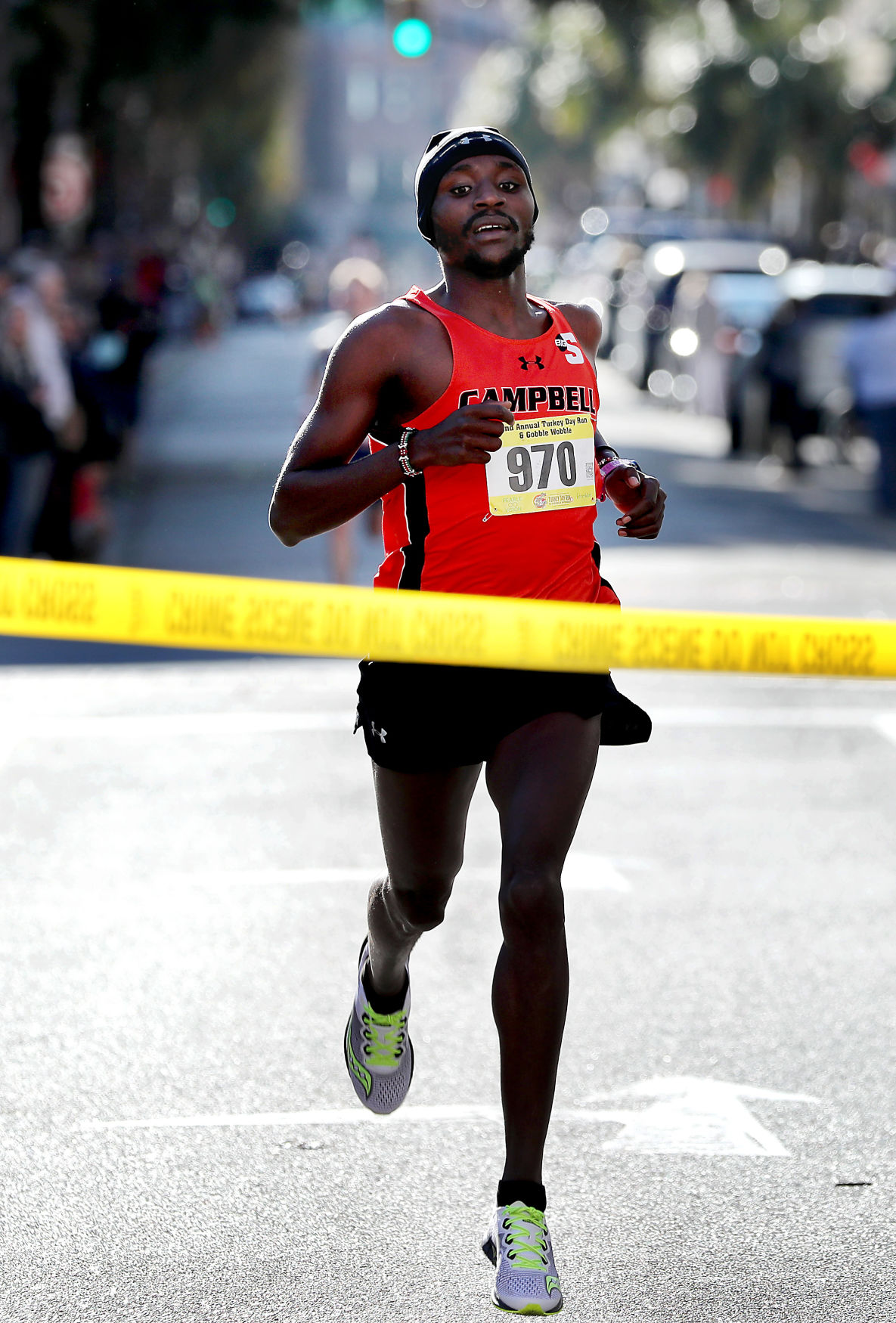 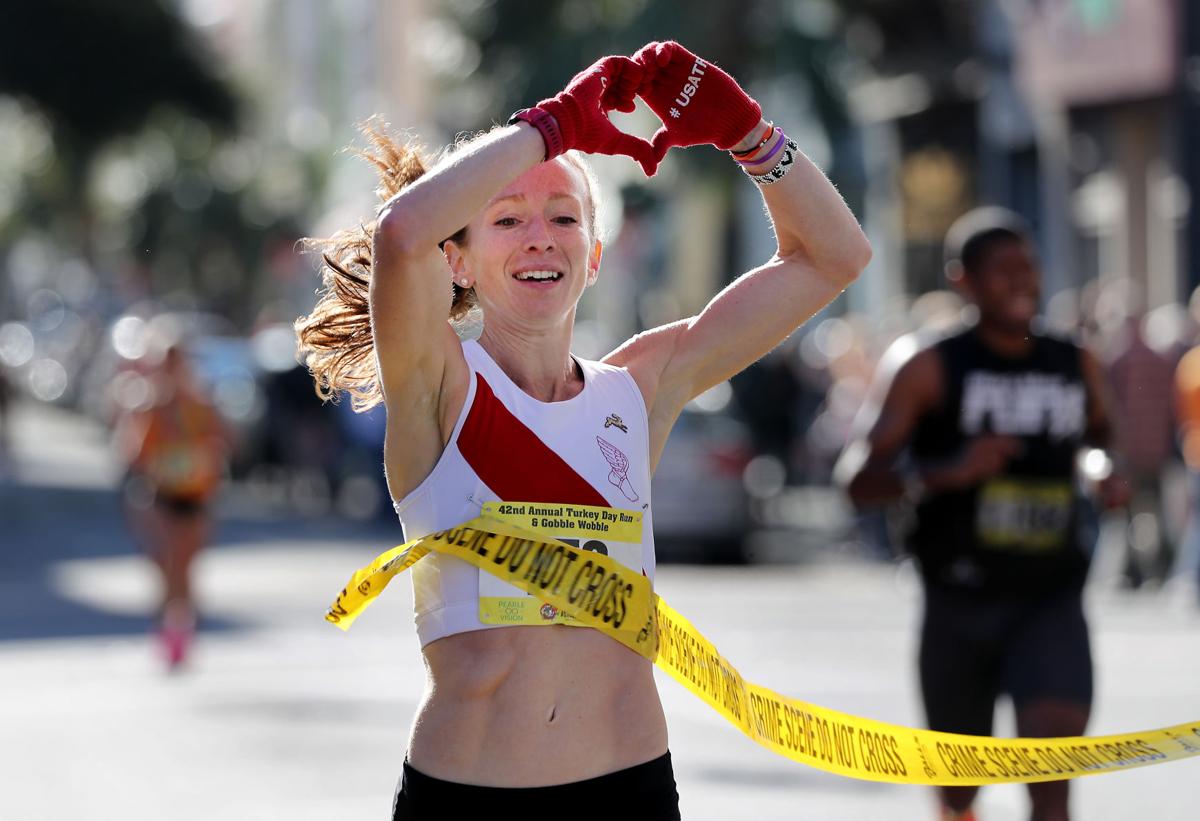 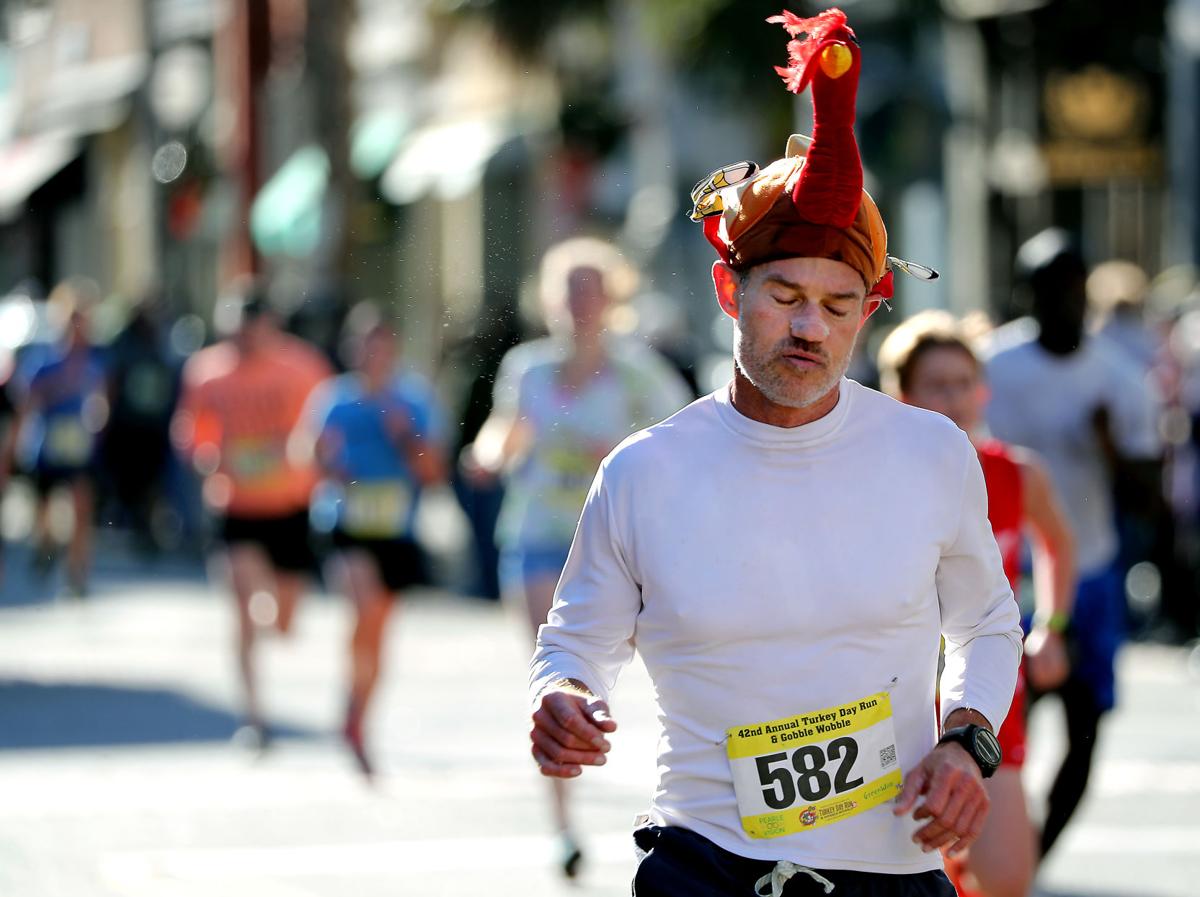 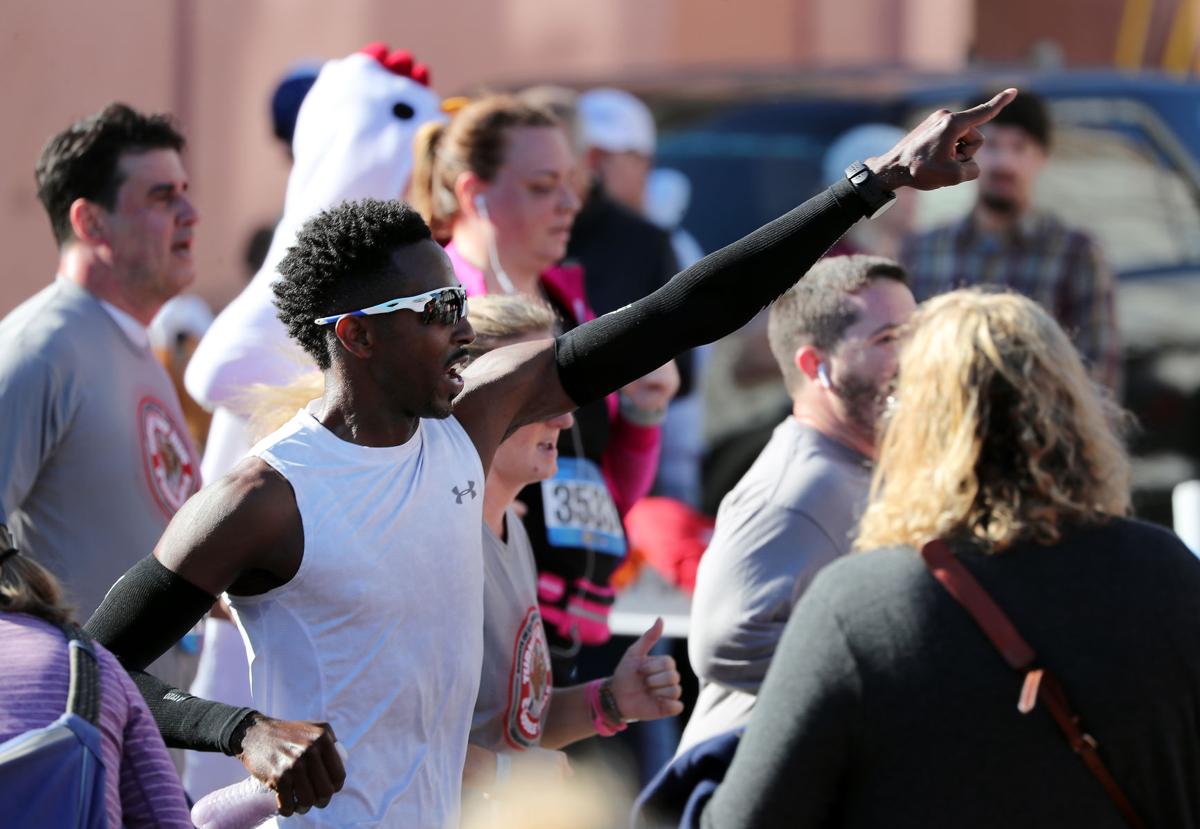 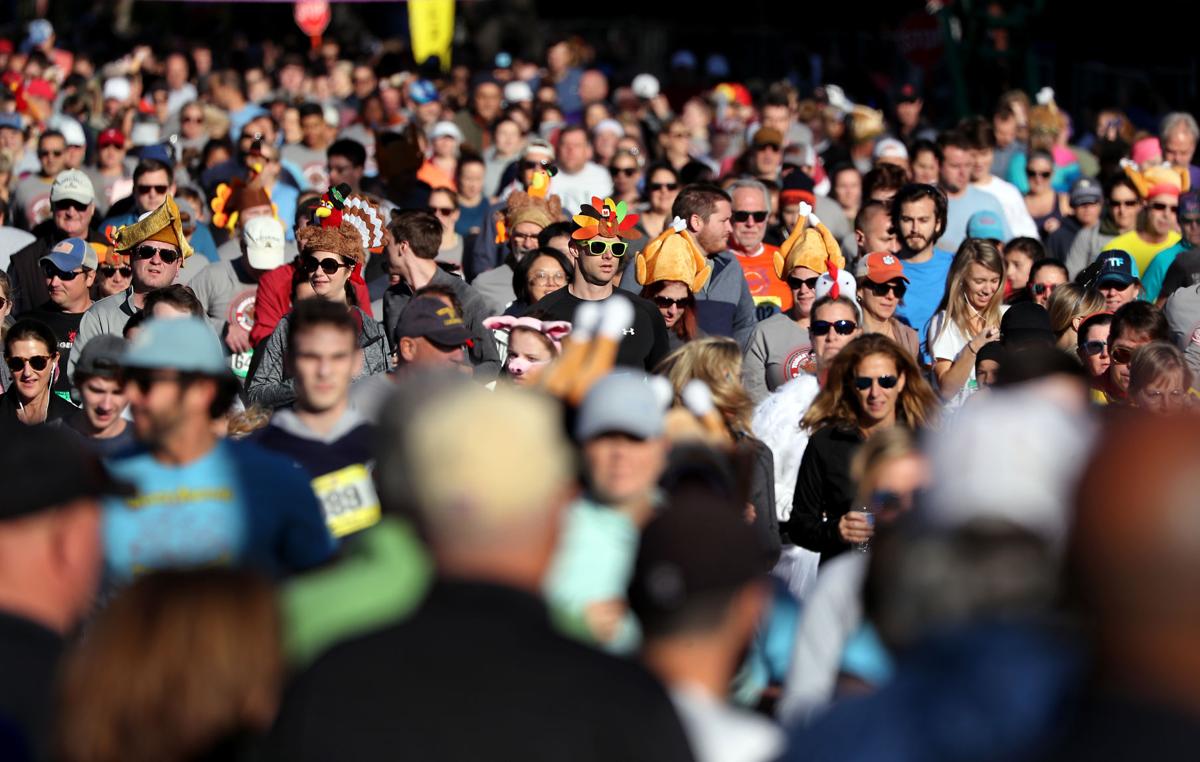 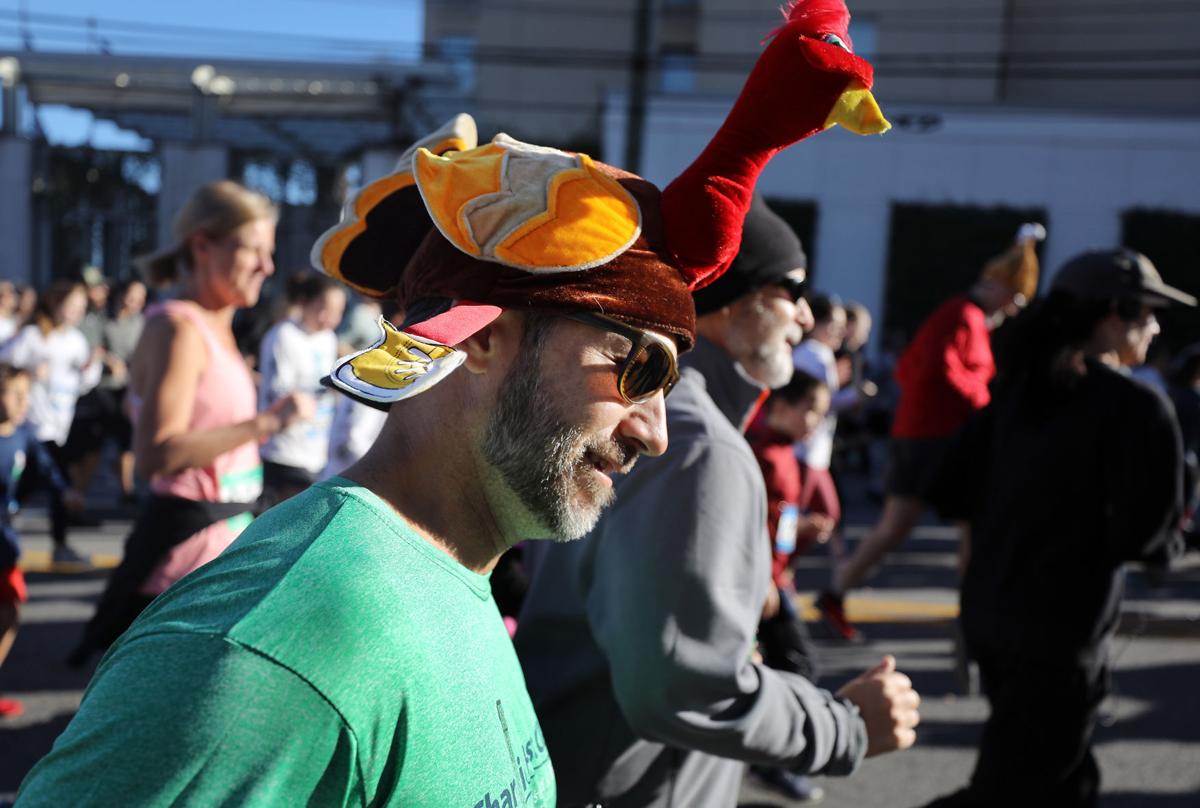 When Cole Atkins crossed the finish line at the 42nd annual Turkey Day Run & Wobble Gobble Thursday morning, he turned back to look down King Street hoping to get a glimpse of his wife.

Atkins, 33, shrugged off well-wishers and race officials as he waited for his bride to finish the 5,000-meter race that featured a record 7,762 runners on Thanksgiving morning.

When Esther Atkins came into a view, a wide grin spread across Cole Atkins’ face.

Esther Atkins, who had been the runner-up in each of the last two years, won the women’s division in a time of 16 minutes and 48 seconds. Cole Atkins, a former Academic Magnet standout, took second place in the men’s division, finishing behind former Campbell University All-American Lawrence Kipkoech, who set a course record in a time of 14:16 for the 3.1-mile course.

“I’m always so happy when Esther does well,” said Cole Atkins, 34, who lives in Greenville. “She’s been a runner-up a couple of times and I know getting the win must have felt so rewarding after all the hard work she has put in. I’ve probably competed in this race more than any other race. We always come down to Charleston for Thanksgiving and this is always such a great way to start off the holiday.”

Esther Atkins, 33, has been a runner-up to Kathryn Lazarchick, who set the course record in last year’s event at 16:25, in 2018 and 2017, but powered her way down the final stretch to get the win by more than eight seconds. Atkins has had injury issues over the past year, but is finally healthy.

“I got injured last October and kept training my way through it and ran myself into the ground,” Esther Atkins said. “I went six months without racing until a couple of weeks ago when I set a personal record at the Indianapolis Monumental. At my age, I don’t know how many more (personal records) I’ll get, so I was really pleased with that result and then, obviously, getting a win here today.”

With temperatures hovering around 60 degrees under a cloudless sky, conditions were ideal for a fast race and Kipkoech, 27, took full advantage.

It was a two-man race between Kipkoech and Atkins until the two-mile mark when the nine-time All-American made his move down King Street.

“We were together until about the 2-mile mark and then he put it into another gear and took off,” Cole Atkins said. “I kept chasing him, I stayed as close as a I could, but he’s got a pretty good pedigree.”

Kipkoech, who finished 37th at the 2018 NCAA Cross Country championships, won Big South titles in the mile, 5,000 and 10,000-meter events this past spring.

“This was my first time here, it’s a very nice course, a fast course, not a lot of wind,” said Kipkoech, who currently lives in Durham, N.C. “I very was happy to set the course record. I felt like I was going at a pretty good pace and (Atkins) was a very strong opponent.”

Cole and Esther said they are preparing for February’s U.S. Olympic marathon trials, which will be held in Atlanta.

“Normally you start training for a marathon about 12 weeks out and we’re almost there,” Cole Atkins said. “We’re are almost at that point right now, so this is a good little break for both of us.”

Photos: Thanksgiving off to running start at Turkey Day Run