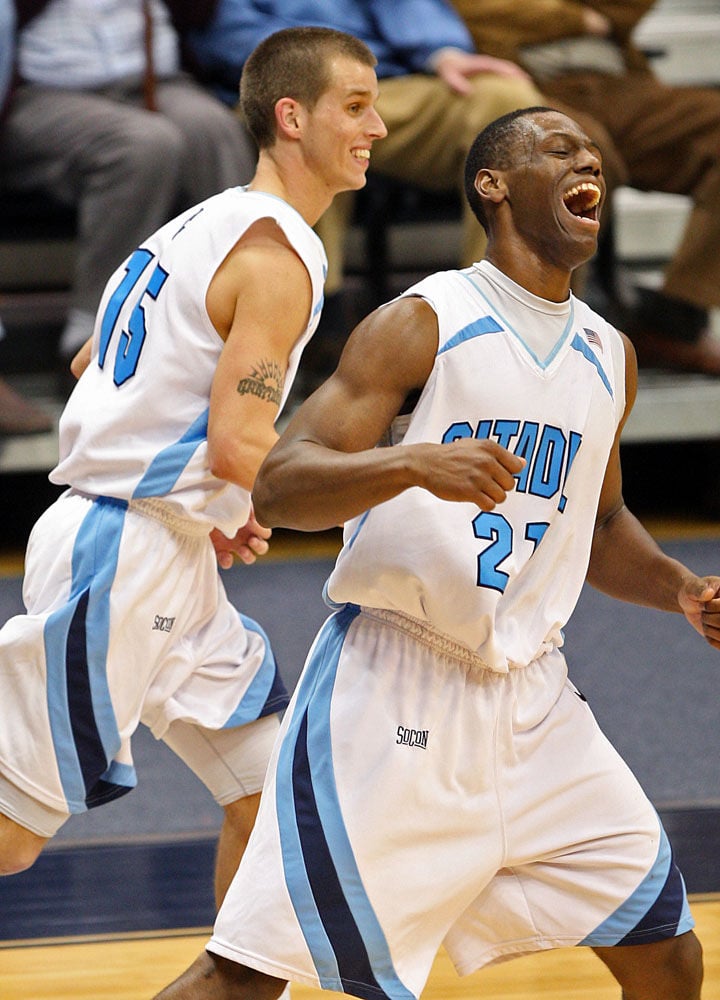 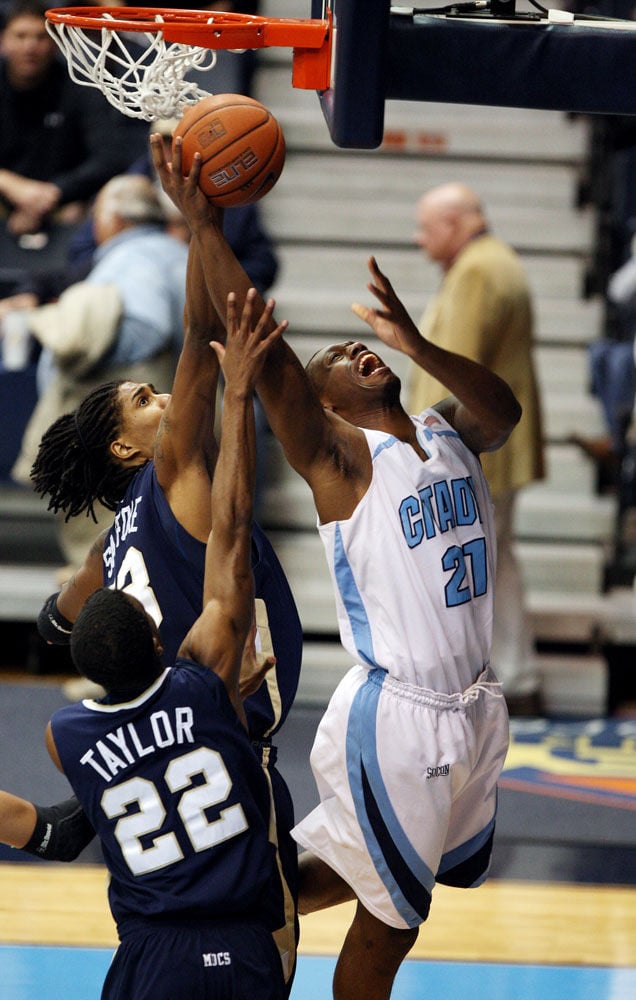 The Citadel's Bryan Streeter takes a layup as Chattanooga's Jeremy Saffore (53) and Ricky Taylor defend in the first half Saturday, Feb. 6, 2010, at The Citadel 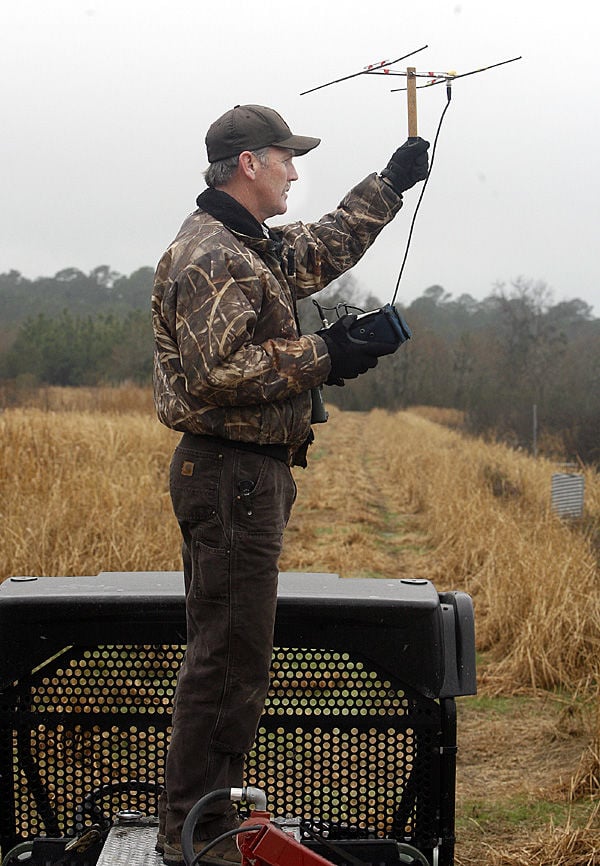 Mark Purcell, ACE Basin National Wildlife Refuge manager for the U.S. Fish and Wildlife Service, searches for two whooping cranes that have made the basin their winter home.

The Citadel's Bryan Streeter takes a layup as Chattanooga's Jeremy Saffore (53) and Ricky Taylor defend in the first half Saturday, Feb. 6, 2010, at The Citadel

Mark Purcell, ACE Basin National Wildlife Refuge manager for the U.S. Fish and Wildlife Service, searches for two whooping cranes that have made the basin their winter home.

ACE BASIN -- The couple look like they're preening, side by side with their chests out and long necks curved like pitcher handles. It's a darling image, until you see the bald eagle stalking from the overhead limb of a dead tree.

The couple's pose is a defensive posture. It works. The eagle flies away.

The whooping cranes in this wide-open maze of waterfowl impoundments may be the rarest thing to be found on the Lowcountry coast. They are one of two mating pairs that have made a winter home here. The birds were wiped out in this state a century and a half ago.

Whooping cranes are the statuesque, snow-white wading birds with a crimson crown and black-tipped wings. They are simply the tallest wading birds around, at approximately 5 feet they are half again taller than a great blue heron.

Near the couple, the massive eagle looked no bigger than a crow. The cranes are renowned for the hair-raising whooping that flocks sound en masse in the wild.

"It's haunting. It sounds like it's right beside you and a mile away at the same time," said Mark Purcell, ACE Basin National Wildlife Refuge manager for the U.S. Fish and Wildlife Service, as he watched the birds' standoff from the cover along an impoundment dike.

Purcell is one of a handful of people keeping watch on them -- state and federal wildlife agents, a tracker working with a private foundation and a collection of concerned private landholders onto whose properties the birds fly. On a recent morning cold enough to see breath, Purcell is out in a rain that feels like ice, hoisting a tracking antenna into the air.

Ponds on the coastal islands have been named for the cranes. But little more than a decade ago, the idea of seeing one was enough of a laugh that Purcell, a biologist and a Lowcountry native, once chided an engineer who wanted to put an image of the crane on the cover of a Charleston estuary report.

Their return is a signature of the conservation ethic and the pivotal importance of the ACE Basin, that groundbreaking network of private and public landholders who now keep native more than a quarter-million wetland acres just south of Charleston.

"There are certain wild things that need to be in an ecosystem, one or two special species that give significance to what we're doing," Purcell said. They are the "trace creatures," he said, the few, iconic animals that are the essence of the wild place. Like the whooping crane.

The birds have an ornate courtship ritual of bobbing, weaving and jumping that fascinates. Mating or not, they seem to like to match each other's poses and moves. They do it with the elegance of dancers on tiptoe. They have the sweeping beauty of swans in flight.

They are back here almost by accident. The only remaining wild flock wintered in the Southwest until a touch-and-go reintroduction effort of captive breeding and ultralight plane-led migration from their summer grounds in Wisconsin began bringing them back to Florida in the 1990s.

They arrived in the Lowcountry little more than five years ago -- so unexpectedly that biologists didn't know what to make of what might have been the first report. The biologists tried to dissuade the woman caller who claimed to see one by suggesting other species she might have confused. She wouldn't have it. "This bird is bigger than my Buick," she told them.

How long the two pairs winter here and whether they establish a flock is anybody's guess. Eagles are only one of the predators. Wild born chicks keep dying in the Wisconsin nesting grounds; the suspected culprit is black flies chasing the parents off the nest, leaving the young open to predation. In 2007, an entire hatch brood of 17 birds died in a Florida storm after making the ultralight migration.

For a few years now, the male of one pair has followed the migrating Florida flock as far as the St. Marys River on the Georgia-Florida line before peeling off toward the Lowcountry. Last December, three whooping cranes in that flock were found shot to death in that area.

But they seem to like it here. The basin gives them one of those forgotten-place refuges with enough room and landholder respect to thrive. The private-public partnership is the key, as the birds forage across the dikes that are property lines.

The basin is a wonder, the sort of place where fox squirrels and rare, pure-white red-tailed hawks can be found. At dawn in winter, an eerie bugling like tiny elk sounds in a pond, then hundreds of tundra swans scamper across the water with their webbed feet clapping the surface, their long white wings flapping until they lift off.

For whooping crane, that's home, in among rafts of wading birds and wintering ducks. When Lara Fondow, an International Crane Foundation research associate who is one of the trackers, first stepped from her car, she stopped, gaped and took in a long breath.

"Wow," she said. "No wonder those birds are here."