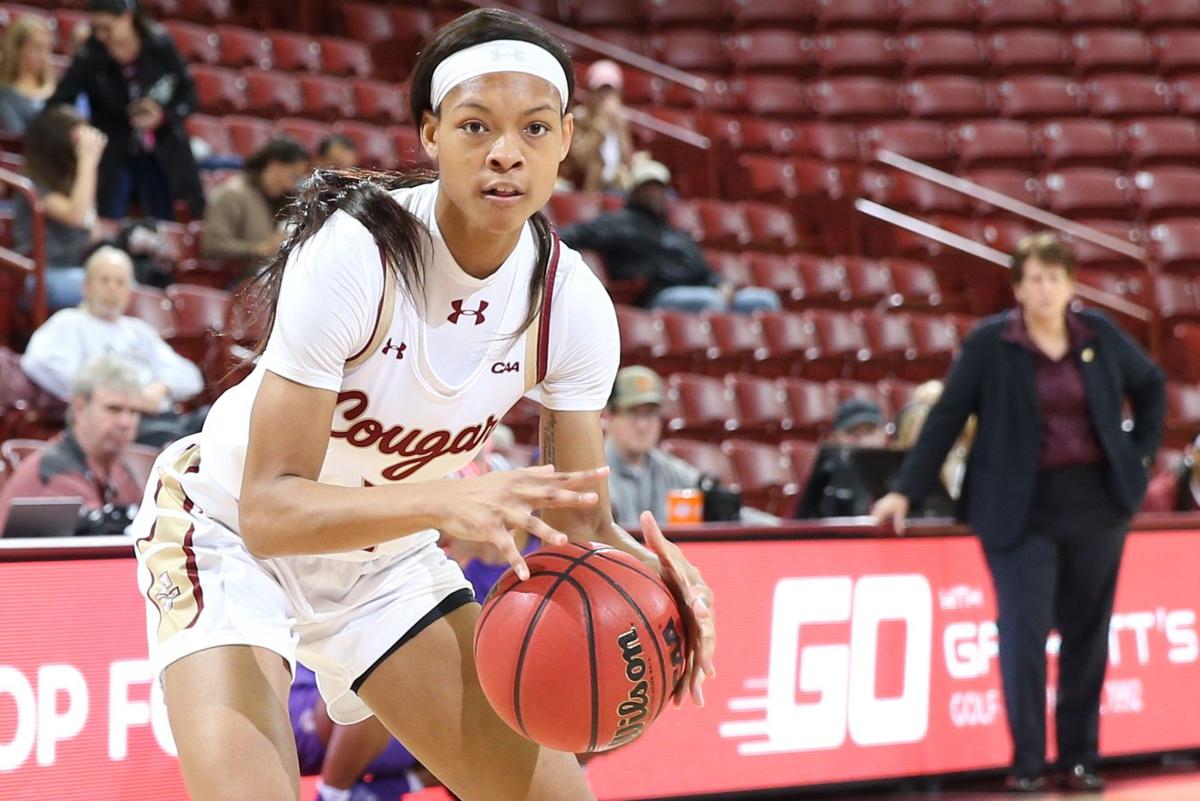 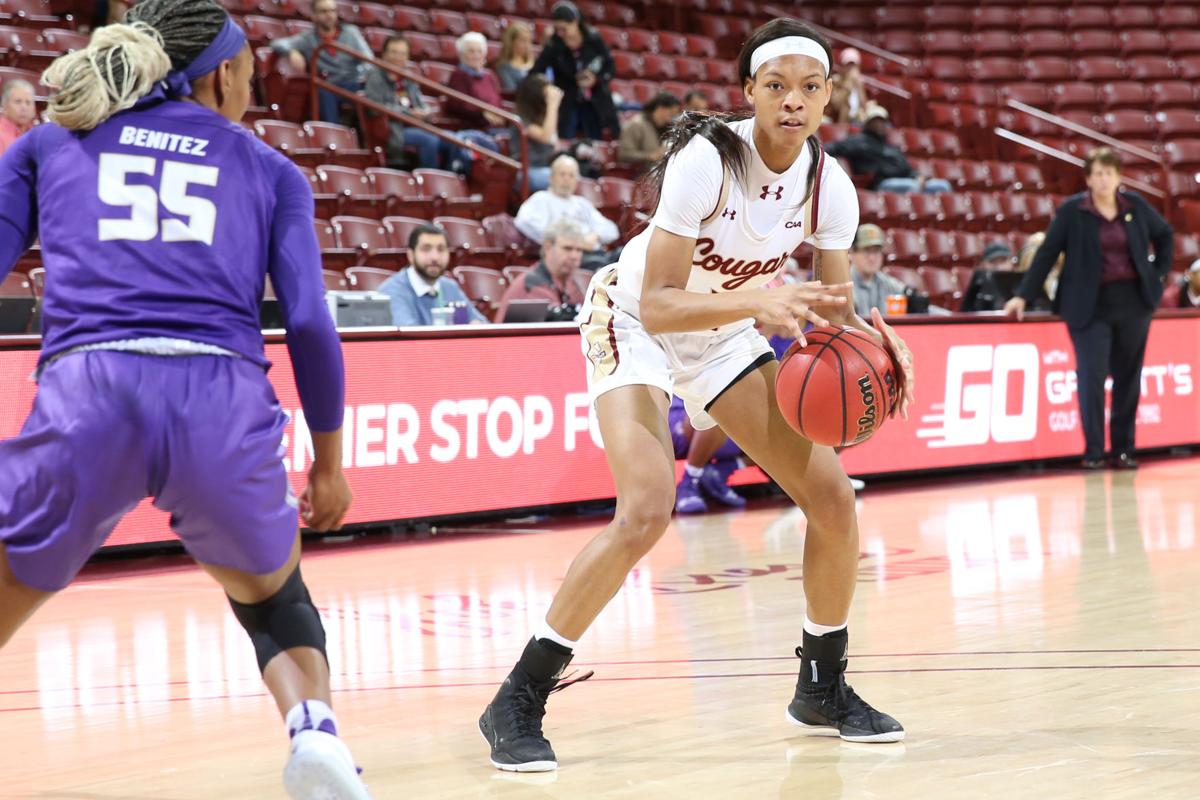 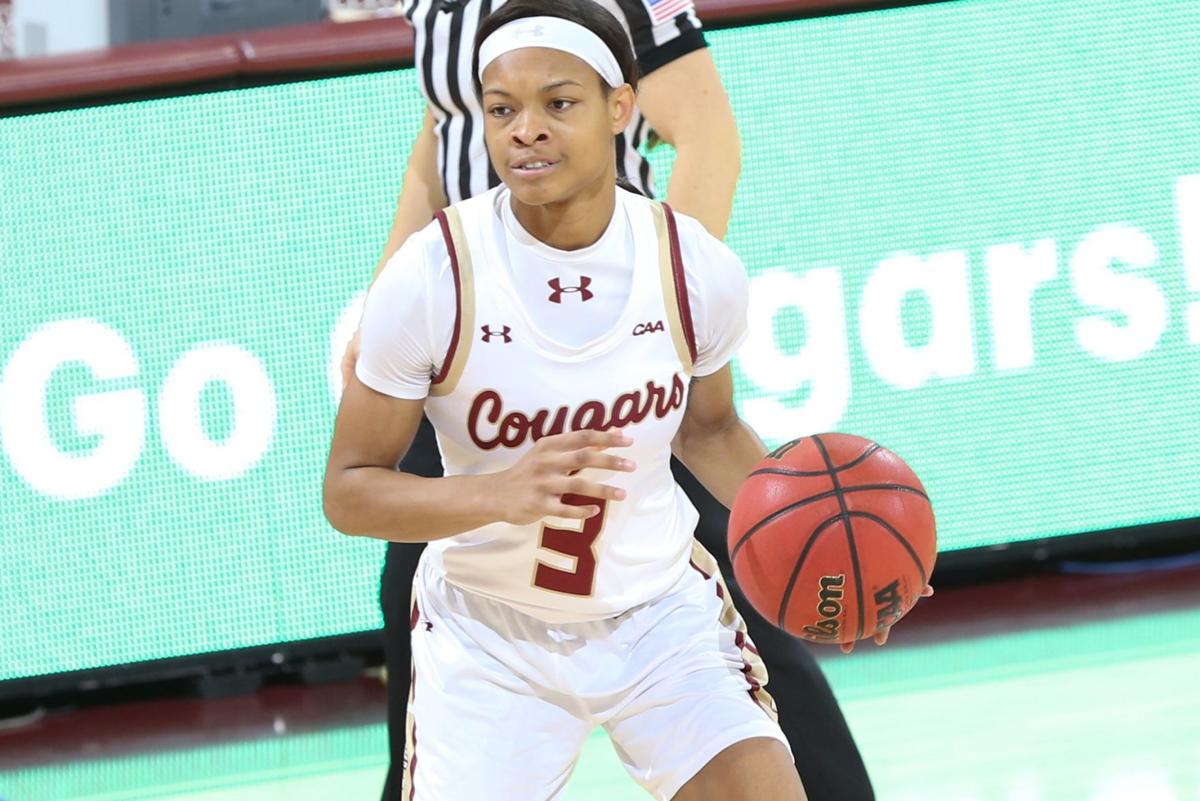 The tall and slim rising sophomore from Winder, Ga., had all the physical tools that Harmony looks for in her players. At 5-11, Perkins was a perfect fit for Harmony’s high-tempo, full-court pressure defense.

“The first time we saw Latrice in open gym, we thought she could help us right away,” Harmony said. “She can run the floor, she’s long, and she’s athletic. Her body type is what we look for when we’re recruiting for our system. I knew she was going to be a great fit for us.”

A year ago, Perkins was little more than an afterthought as a freshman under former head coach Candice M. Jackson. Perkins played in all 29 games, but came off the bench, averaging 14 minutes and just four points a game. She scored in double figures just two times.

“As a freshman, you never know how much you are going to play,” Perkins said. “I didn’t play all that much last year, so I tried to take the opportunity to learn and get better at practice.”

Heading into the Cougars’ annual ‘Education Day’ game against William & Mary on Friday (noon) at TD Arena, Perkins is leading the Cougars in scoring, averaging 13.6 points a game. She has scored in double figures in 15 of the Cougars' 20 games, including a career-high 29-point performance against High Point.

“She can score in a lot of different ways,” Harmony said. “She likes to get to the basket, but she can score off the bounce, and her 3-point shot has improved. For her size, she’s strong and she can cover a lot of ground in our press. She gets a lot of her points through her defense.”

Perkins’ turnaround is a major reason why the Cougars are 11-9 going into Friday’s matchup against the Tribe. The Cougars won a total of just 14 games over the previous two seasons and haven’t had a wining season since they went 19-15 during the 2013-14.

“The way coach Harmony coaches is the way I’ve been playing my whole life,” Perkins said. “I knew I was going to fit into her playing style from the first practice. It’s more free, and everyone has a chance to score in her offense. There’s a lot more running, it’s fast-paced, and we pressure all over the court. I have a way bigger role this year, and the coaches have confidence in me and that’s where my confidence is coming from.”

Over the last five seasons, the Cougars averaged just eight wins and 23 losses a year. Setting standards and changing the culture have been two of the biggest hurdles for Harmony and the coaching staff to overcome.

“Everyone wants to win, but they don’t necessarily want to put in the work to get there,” Harmony said. “I think when we first got here we had to convince them that it hurts to lose. At first, they were like, 'Oh, OK, we lost, it’s no big deal.'

"They were not excited about games they won or upset about games they lost, so we had to change that and teach them there’s winning and there’s misery. They didn’t like the misery, so they decided to play hard.”

Tyler Collins (12.7 points a game) and veteran Deja Ford (11.1 ppg) have provided other scoring options. The emergence of Taylor Williams as another defensive stopper has helped the Cougars become a more balanced team.

Charleston has proven it can beat anyone in the Colonial Athletic Association, defeating first place Drexel in the opening game of league play. Now, Harmony wants the Cougars to be more consistent.

“They are starting to get a better idea of what we want and expect,” Harmony said. “We want to play to our standards. If we play hard and smart and lose, we can live with that. It’s when we get popped in the nose and fall apart is what I don’t like. We are going to make mistakes, that’s part of the game. We just want their mistakes coming when they are playing at a 100 miles-an-hour.”