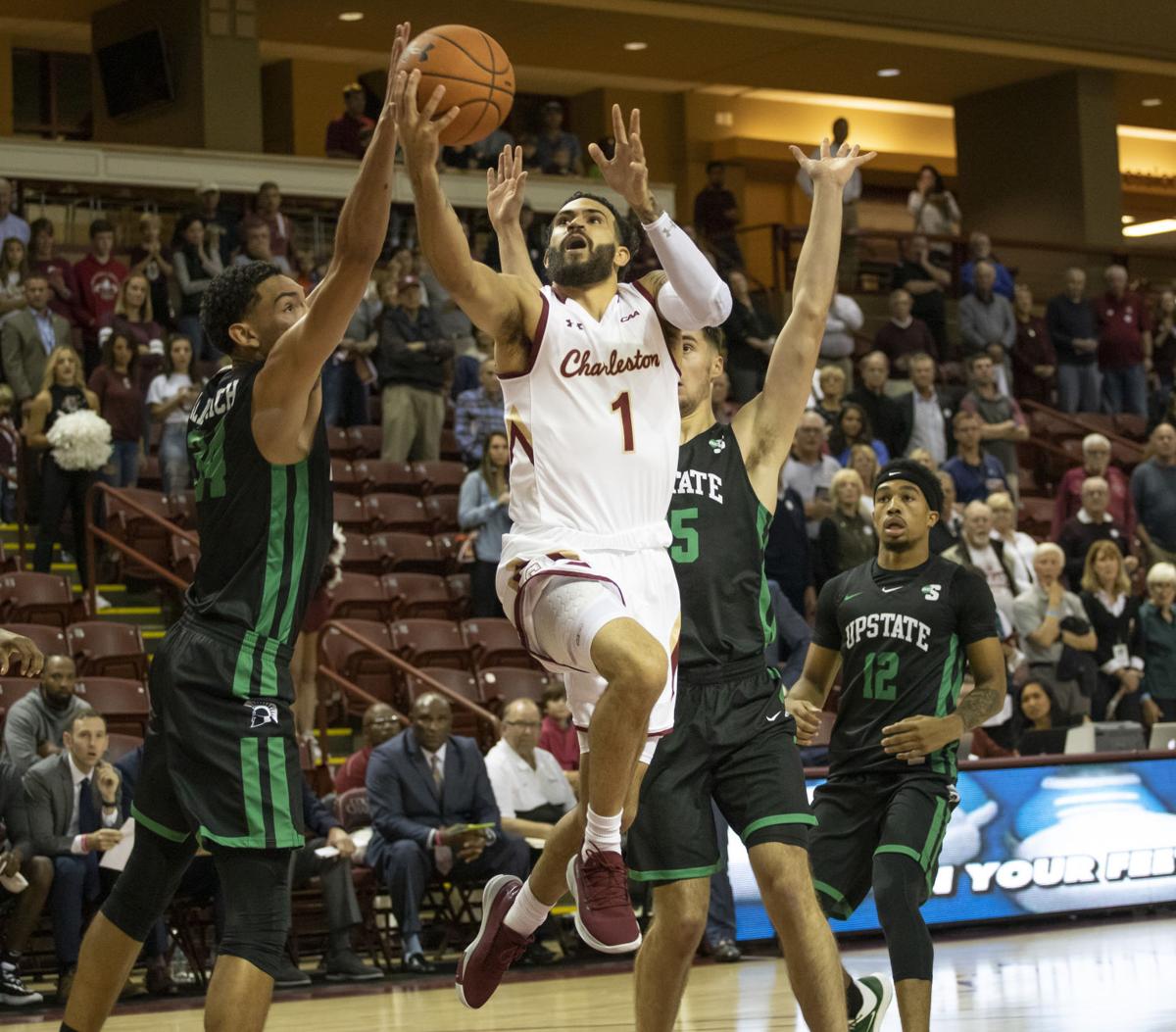 Charleston's Grant Riller goes up for a layup during a game against USC Upstate on Tuesday, November 5, 2019. Brett Lemmon/Special to The Post and Courier 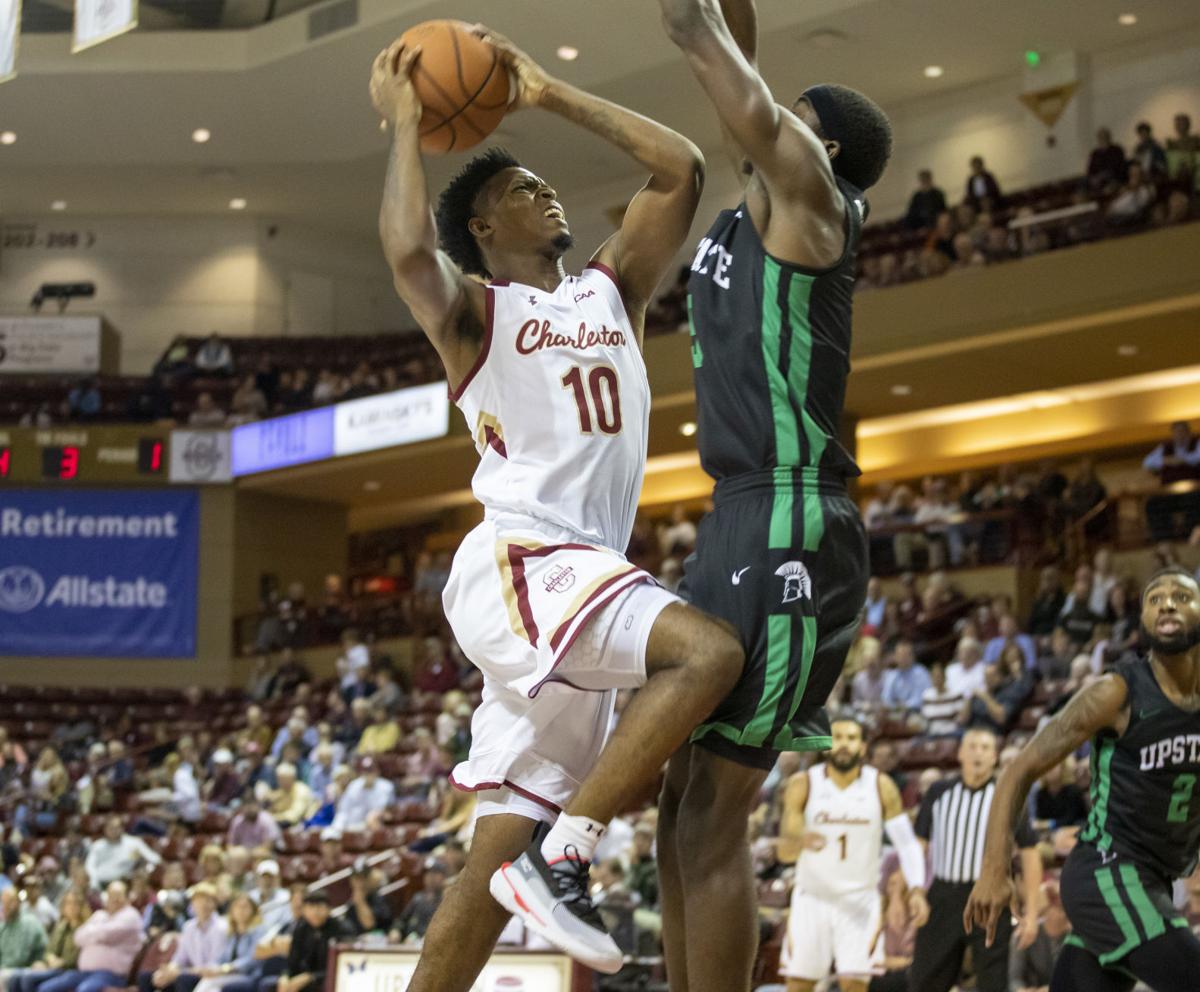 College of Charleston's Zep Jasper takes a shot during a game against USC Upstate. Brett Lemmo/Special to The Post and Courier. 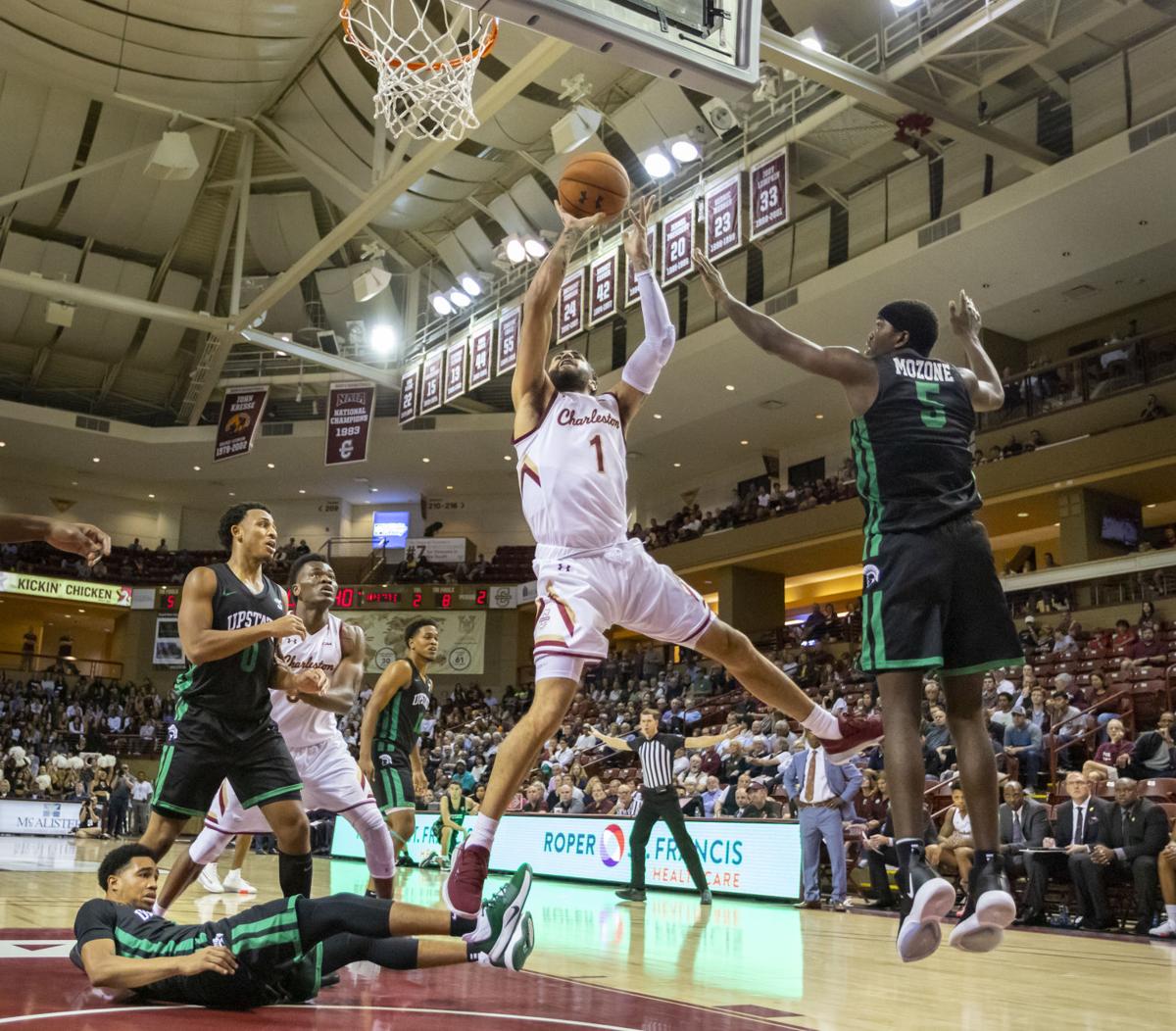 College of Charleston's Grant Riller is fouled on a layup attempt during a game against USC Upstate. Brett Lemmo/Special to The Post and Courier.

Charleston's Grant Riller goes up for a layup during a game against USC Upstate on Tuesday, November 5, 2019. Brett Lemmon/Special to The Post and Courier

College of Charleston's Zep Jasper takes a shot during a game against USC Upstate. Brett Lemmo/Special to The Post and Courier.

College of Charleston's Grant Riller is fouled on a layup attempt during a game against USC Upstate. Brett Lemmo/Special to The Post and Courier.

Riller recorded his 33rd 20-point game in College of Charleston’s 74-55 win over USC Upstate in the season opener at TD Arena.

With his 26-point ho hum performance against the Spartans, Riller moved past Sam Meade into sixth place on the College of Charleston’s all-time scoring list with 1,822 career points. Next up on the list is Riller's buddy and former teammate Joe Chealey, who finished his career with 1,827 points.

This issue this season for the Cougars won’t be Riller. As long as Riller is healthy, he’ll get his points and keep the Cougars in just about every game they play.

With the departure of 6-7 forward Jarrell Brantley to the Utah Jazz and the NBA, the biggest concern for the Cougars remains in the paint. Who can defend and rebound and who can get those dirty points around the basket when needed?

Dayton transfer Sam Miller certainly looked the part as the senior was just a basket shy of recording his first double-double with Cougars, finishing with eight points and a career-high 14 rebounds. Osinachi Smart got his first start and had just two points, but hauled down seven rebounds. If the Cougars can get 10 points and 21 rebounds from the center position, they should be just fine moving forward. The only problem is, they won’t be playing an overmatched USC Upstate team every night.

“You’ve got to feel fantastic about getting that kind of production out of the that five spot,” said College of Charleston Earl Grant. “I think they’re going to have to do it by committee, but getting 10 points and 21 rebounds out of those two, that’s unbelievable production. We’ve got to harness that and continue to push them to rebound and play defense like they did tonight.”

After getting outrebounded in the first half by the smaller and quicker Spartans, 19-16, the Cougars held a 27-15 rebounding advantage over the final 20 minutes.

“I’m trying to focus on doing my job on defense first,” Miller said. “Coach Grant really likes his centers to be the anchors on defense, so I'm out there trying to talk a lot and do my job. Coach had been on me about rebounding, so I’ve been really trying focus on doing a better job. I really wanted that double-double, too. I might have forced a couple of shots there at the end of the game.”

It's easy to take the Orlando, Fla. native for granted. If there’s a such thing as a quiet 26 points, Riller provided that Tuesday night.

The senior was 9 of 14 from floor, made 2 of 3 3-pointers, collected four rebounds and handed out three assists.

Riller has been one of the most efficient scorers at the mid-major level for three years and it was on full display against the Spartans.

“We really didn’t run a lot of plays for Grant,” Grant said. “It was the first game, so I don’t like to show a lot of what we do and we ran a lot of our motion offense.”

The Cougars were supposed to be a good shooting team, and they probably will be moving forward, but they went just 3 of 18 from 3-point range against an inferior opponent. Charleston missed all 10 3-point attempts in the second half.

"I thought we settled for some threes when we could have moved the ball a little more and gotten a better shot," Grant said.

“I think we’ve got guys that can score, even when we’re not hitting the three,” Riller said. “Those shots are going to fall.”

The Panthers have been to the NCAA Tournament three times since 2015.

“They are good team, very talented and know how to win, Grant said.