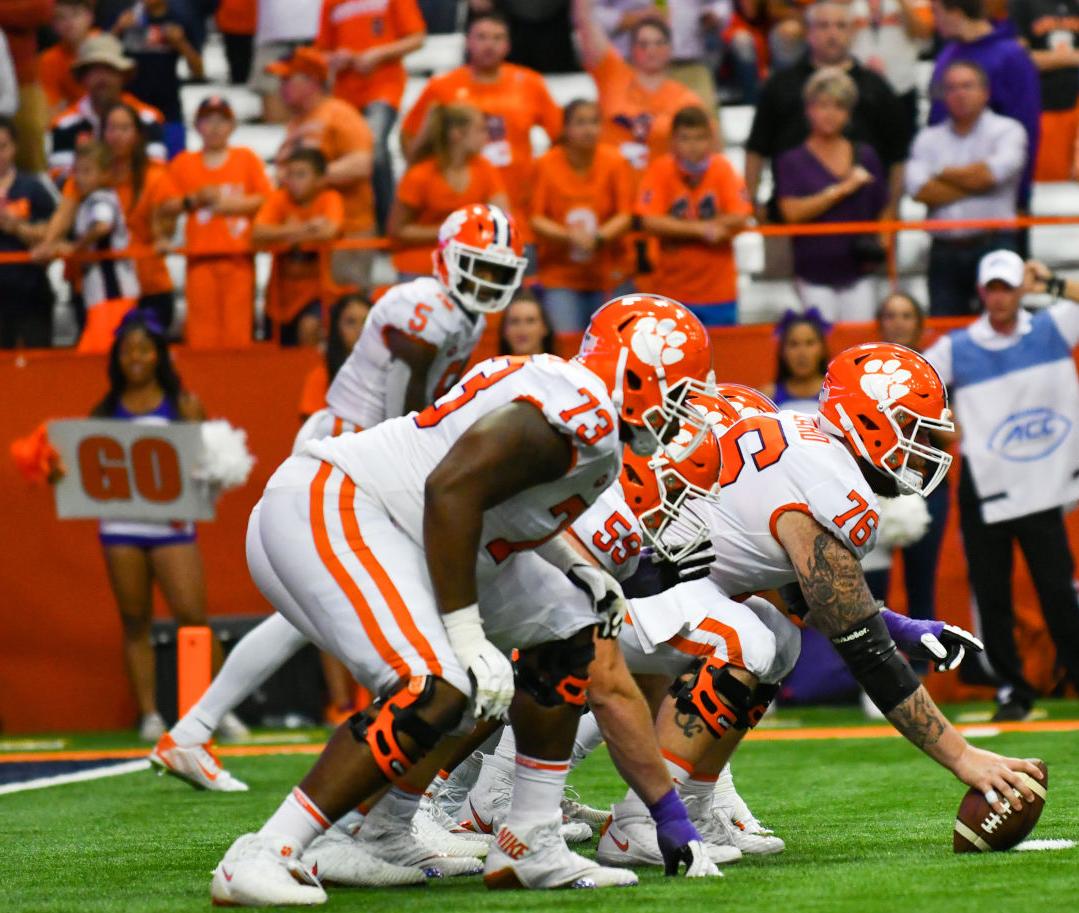 Clemson's offensive line does the dirty work so teammates like quarterback Trevor Lawrence and running back Travis Etienne can get the glory. Photo provided/David Platt 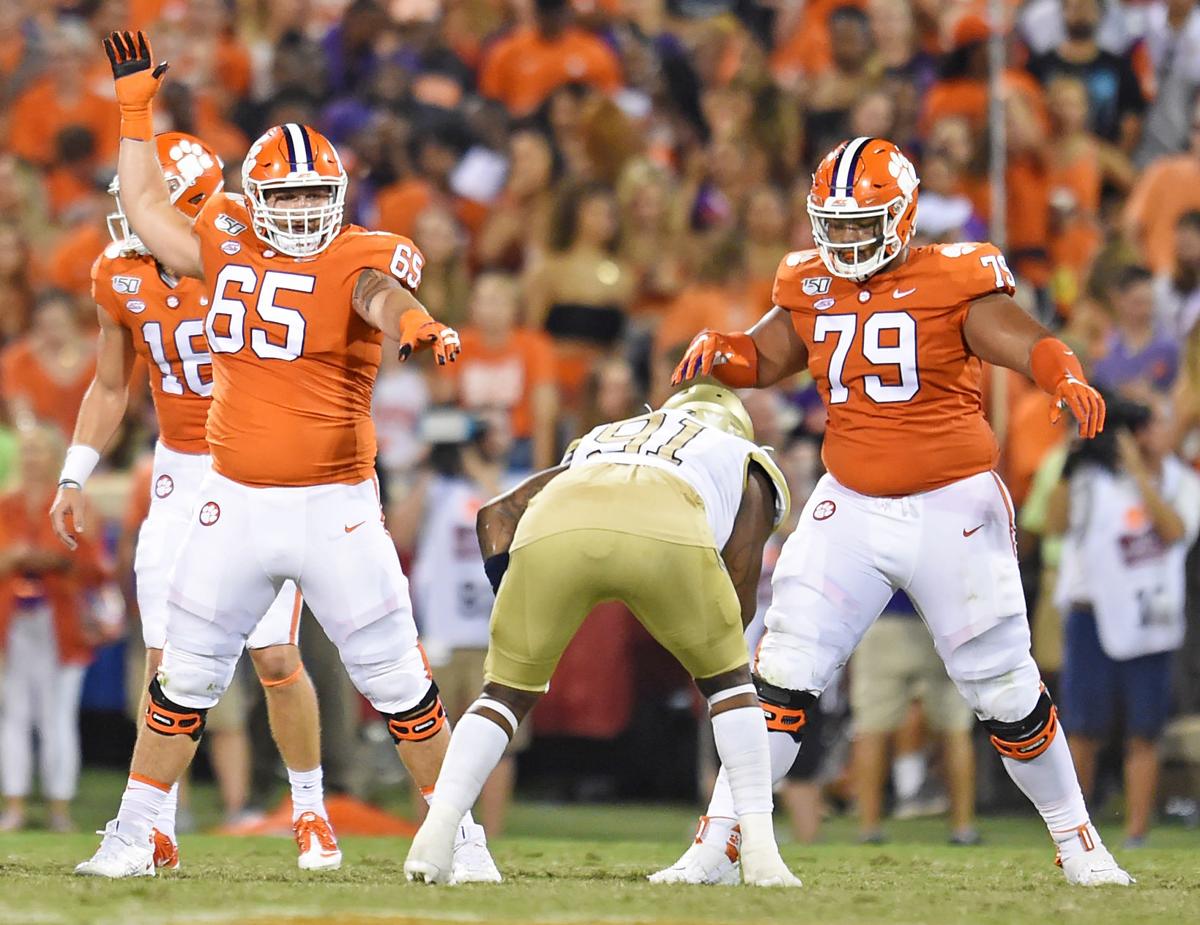 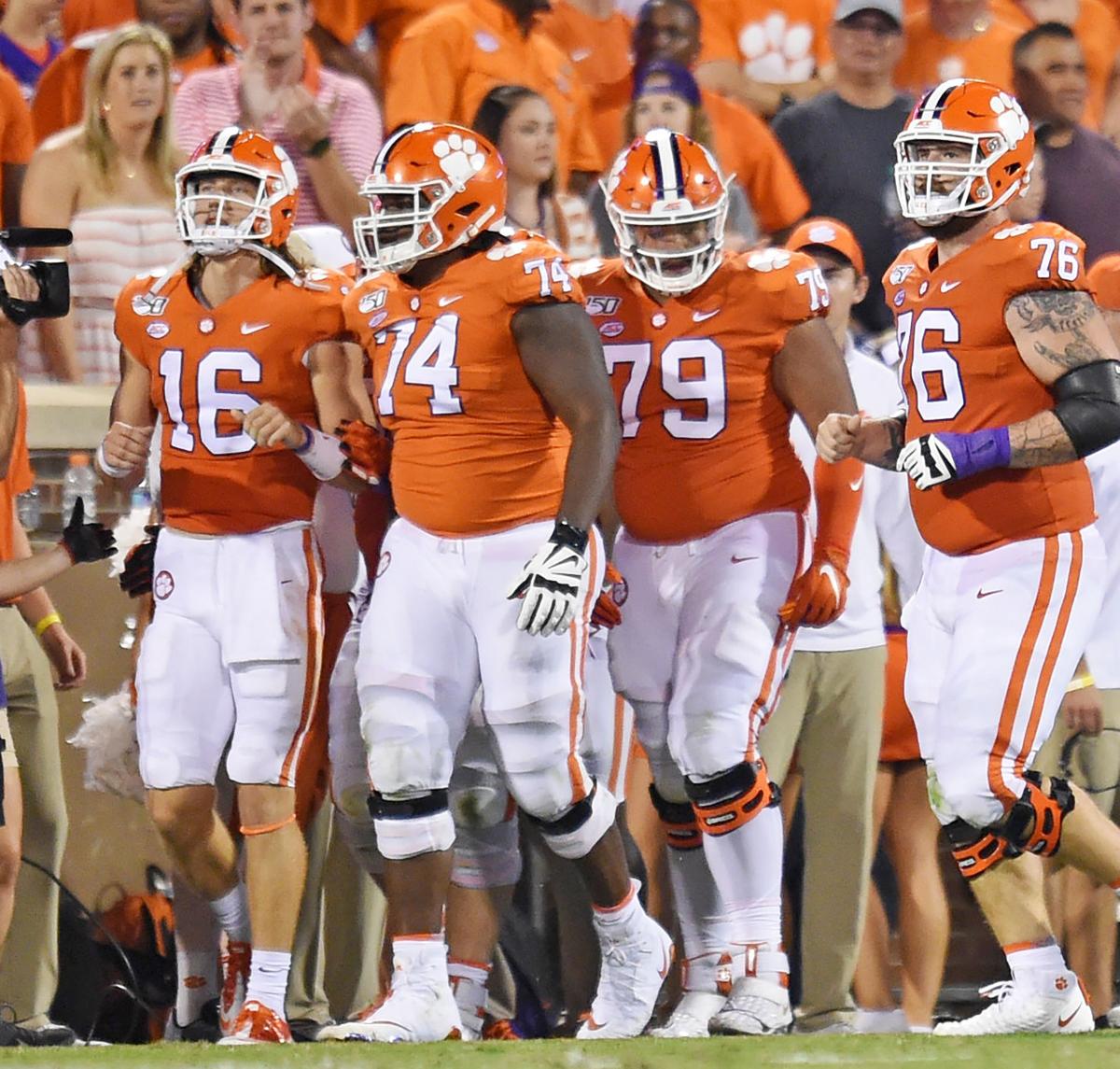 Clemson's offensive line does the dirty work so teammates like quarterback Trevor Lawrence and running back Travis Etienne can get the glory. Photo provided/David Platt

But after the Tigers christened the 65-year-old's 500th career game with a 59-7 win over Boston College, Caldwell was called to the middle of the team's postgame dance circle.

"I hope to the Good Lord that there's some footage of that somewhere," Coach Dabo Swiney said after the win last Saturday.

Swinney's prayers were answered. A video documenting the moment posted by Clemson's official Twitter account had 5,000 likes by Thursday afternoon, and for good reason: There's Caldwell, with a play card in his back right pants pocket and with a white towel slung over his left shoulder, moseying up to the circle, before crouching and extending his arms out and in a repeated circular motion, hips swaying, against the backdrop of chants from giddy Tigers players: "Hey! Hey! Hey!"

Rare is it that Caldwell, a Pageland native who served as Vanderbilt head coach in 2010, is in the spotlight. Clemson's co-offensive coordinators Tony Elliott and Jeff Scott, who both address the media after every game, concurrently serve as the Tigers' running backs coach and wide receivers coach, respectively. Caldwell and his linemen operate in the shadows.

Clemson receiver glad he didn't transfer: 'I was hoping and praying for a night like this'

Football is a team sport, but it's players at skill positions who are deified. That dynamic is exacerbated at Clemson  with running back Travis Etienne, the reigning ACC Player of the Year, and quarterback Trevor Lawrence, a sophomore who some have hailed a generational talent, and whose long, blond hair has inspired Halloween costumes.

But the offensive linemen? They're weirdos. That's what offensive guard Matt Bockhorst said of his kind, anyway. Both Etienne and Lawrence are quick to heap praise on their linemen, but those who pack Death Valley on Saturday don't wear orange jerseys with names like 'Bockhorst' or 'Anchrum' on the back.

"It's totally weird," senior offensive tackle Tremayne Anchrum said. "Who would want to go into a position where you're basically the grunts, who don't get any glory? You're always getting stepped on, spit on. So, anybody who chooses this life is a weird person."

On Clemson, the linemen are bonded by their weirdness. They have to be. Just like in a crew boat, all members must operate completely in sync, coordinating their movements with one another. If one person takes a wrong step, it can trigger a ripple effect across the line.

And that could lead to a broken play for an offense with weighty expectations.

"Every step you make, every call you make, even where you put your body," Anchrum said. "Those are all important aspects of this line that really make the offense go."

It all starts with communication.

Before the quarterback screams "hike" the center is tasked with making a call at the offensive line. For the Tigers, senior Sean Pollard is the man in the middle, and after examining the defense, he shouts a call to the left and right guards — normally John Simpson [Fort Dorchester High] and Gage Cervenka, respectively —  and then the guards relay the call to the tackles on either side of them. This season, it's usually been sophomore Jackson Carman at left guard and Anchrum at right guard. If a tight end is on the field, the guard next to him passes on the call.

The call down the line is key, said former Tigers offensive lineman Zach Giella, whose college career was effectively ended when the NCAA rejected the school's appeal of his season-long suspension for testing positive for the banned substance Ostarine.

"Our bread-and-butter play was our inside zone," said Giella, who played in 20 games in three seasons. "There was one call that always had to be made."

Sometimes it can be non-verbal. During film sessions, Giella was often taken aback by former linemen Mitch Hyatt and Taylor Hearn, who played next to each other and sometimes only needed to look at one another to communicate an adjustment.

A lot of work is put in before games. Cervenka, Anchrum and Simpson are roommates and frequently pop into one another's room when watching film.

"We all need to know what each guy is doing and where they're going," Cervenka said.

The Tigers' offensive line has gained a reputation as being one of the nation's best in recent years, having allowed time for quarterbacks to hurl big passes and opened holes for running backs to break big gains.

That's continued this season. Clemson is fifth in the nation in sacks allowed (less than one per game) and is second in the ACC in rushing yards (254.1 per game). There have been missteps, though. False starts have drawn the ire of the coaching staff and nearly undid the team in a 21-20 win at North Carolina on Sept. 28.

Bockhorst, a reserve who's earned significant playing time and who earned ACC offensive lineman of the week honors after the team's win over Florida State, admitted to committing a mental error earlier in the season.

In the team's Week 2 win over Texas A&M, Bockhorst tripped on Pollard's foot and surrendered a quarterback hurry. First he was mad at Pollard. Then he replayed the sequence in his mind.

"It was my fault," Bockhorst said. "I was too close to him."

The easy joke about offensive linemen is that they love to eat together. At Clemson, that holds true. Seneca Family Restaurant is among the group's favorite bonding spots. Linemen don't need to like each other, Caldwell said, but it helps.

"The offensive line unit is better when they all enjoy being around each other," Caldwell said. "It's just like anything else. If your boss is a horse's rear end, it ain't no fun to come to work every day."

Linemen are getting bigger, faster and stronger, but physical attributes alone won't make a line run smoothly. They key ingredient is trust.

"It's faith, man," Anchrum said. "You're just worried about doing you're job, so the guy next to you can do his job."

Carman is the only starting offensive linemen with college eligibility remaining through this season. A youth movement is coming.

Anchrum has high hopes for the future. He recalled a moment late in Clemson's win over Charlotte, when the backups were in to block for running back Michel Dukes.

Dukes, a freshman from First Baptist School in Charleston, took a handoff, cut inside and then sprinted 24 yards for a touchdown.

"That was a thing of beauty," Anchrum said

He doesn't remember exactly who was on the field for Clemson, but Anchrum knows Dukes reached the end zone untouched, having slipped through the creases created by a bunch of big weirdos.

Gene Sapakoff column: The NCAA's decision to allow college athletes to cash in on "name, image and likeness" deals is potentially game-changing but is short on specifics and long on vagueness