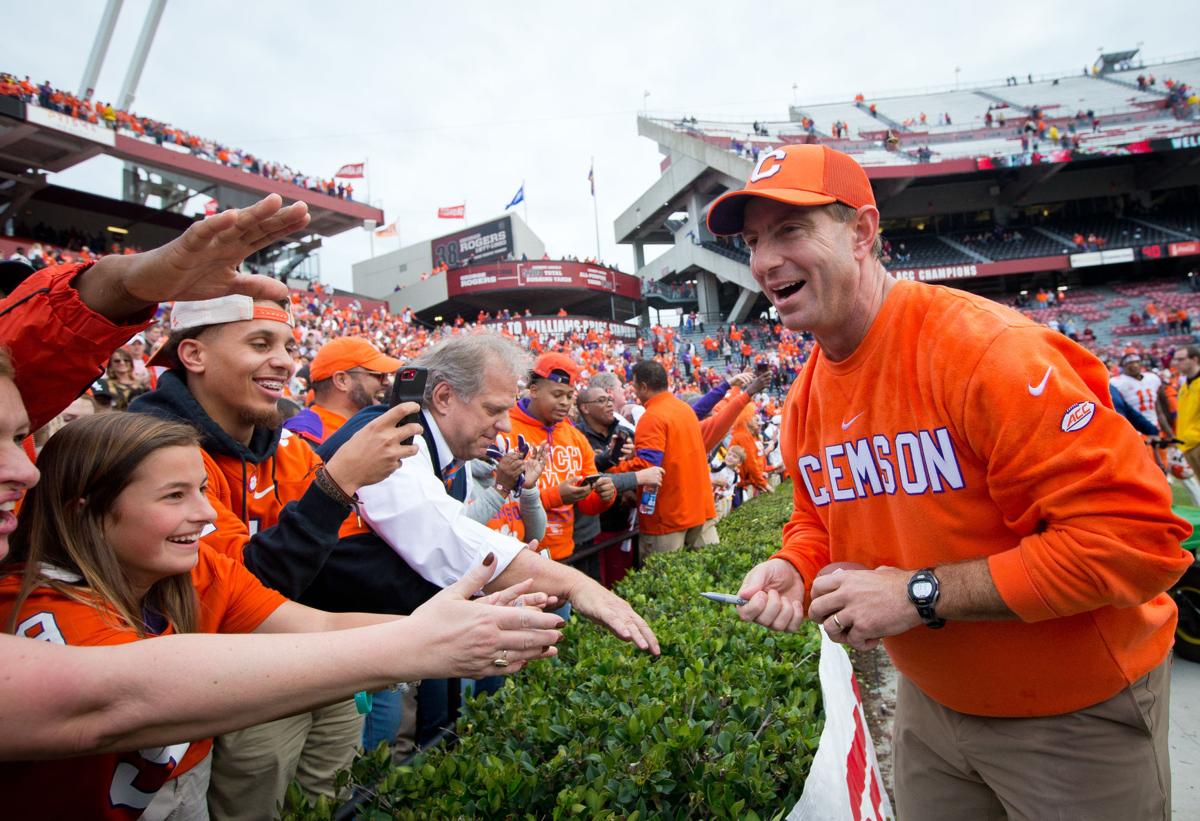 Dabo Swinney is one of the biggest names in college football. He signed autographs after Clemson's 38-3 win at South Carolina on Nov. 30 in Columbia.  Andrew Whitaker/Staff 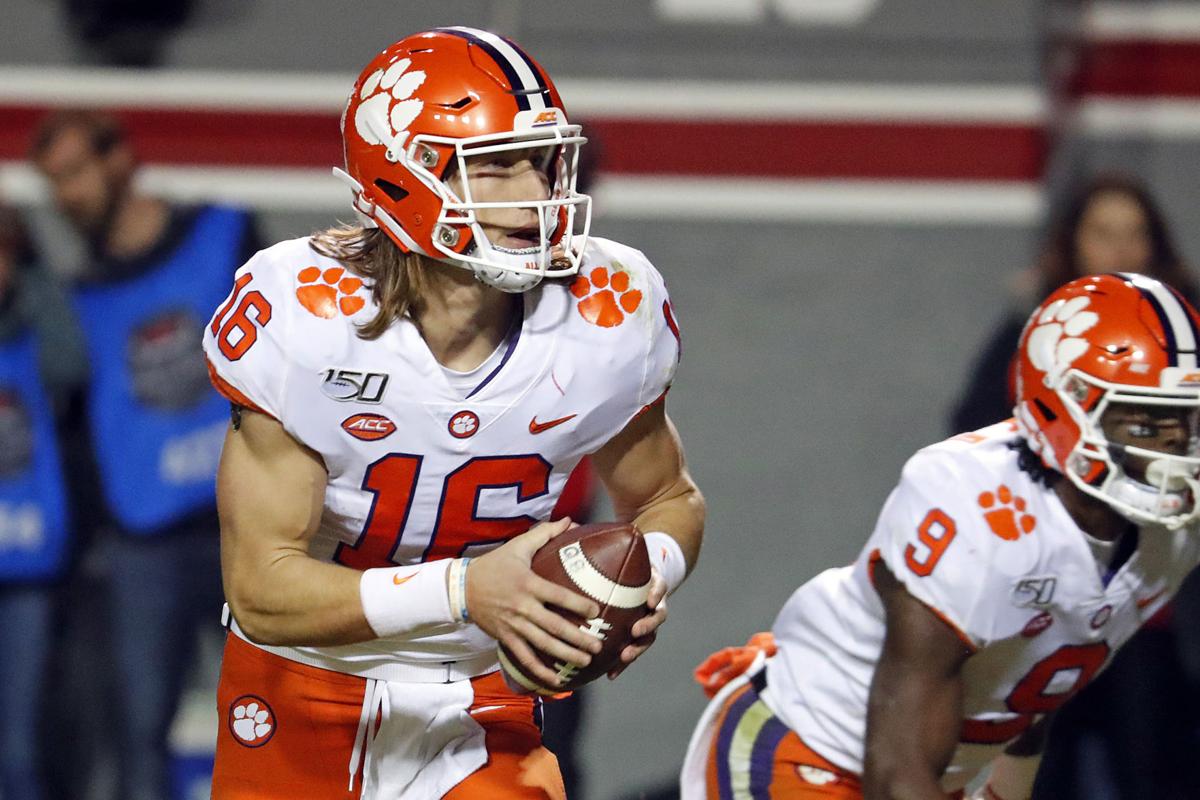 Dabo Swinney is one of the biggest names in college football. He signed autographs after Clemson's 38-3 win at South Carolina on Nov. 30 in Columbia.  Andrew Whitaker/Staff

CLEMSON — Dabo Swinney on Tuesday railed against this season's media coverage of Clemson, echoing a tone used by some politicians on both sides of the aisle and claiming that mass portrayal of the Tigers has been inaccurate and misleading.

On the same morning 16 Clemson players were named to the All-ACC team, Swinney complained that many people have missed out on a "beautiful season" from the Tigers, who are No. 3 in the College Football Playoff rankings ahead of this weekend's ACC Championship against Virginia.

"I just think other programs get the benefit of the doubt," he said. "Last year's team we had a lot of superstar guys. We were portrayed differently. And the crazy thing is this team is playing way better than last year's team. It's not even really close."

Last season, Clemson won the national championship by defeating Alabama, 44-16, to become the first 15-0 team in the sport's history. Swinney labeled it the "best ever." High expectations followed this season, with Clemson starting the campaign ranked No. 1 in the AP Top 25.

Perception shifted after the Tigers' 21-20 win on Sept. 28 at North Carolina, which finished the regular season with a 6-6 record. Swinney said Tuesday there's been too much emphasis on that game, which Clemson won by stopping UNC on two-point conversion attempt in the final minutes.

"The story, instead of who we are and how we play, the story's been about, we played a close game, we don't play anybody; which is totally disrespectful for other teams," Swinney said.

The Tigers rank No. 66 in the nation in strength of schedule, per Jeff Sagarin's rankings.

Swinney has vigorously defended the ACC this season, and on Tuesday he noted the league has 10 bowl-eligible teams.

"It's a very deep league," he said of the ACC, which does not have a team other than Clemson ranked in the top 20 in the nation in scoring offense or scoring defense.

Only two ACC teams — Clemson and Virginia — have won more than eight games this season. The Big Ten has six such teams and the SEC has five.

Paul Finebaum, a commentator for ESPN and the SEC Network, has been a vocal critic of Clemson, and on Tuesday morning's edition of ESPN's Get Up he called Swinney "the most annoying winner in all of sports."

"Somebody just give the man a pacifier, send him to timeout," Finebaum said, in reference to Swinney's comments this past weekend that the CFP committee doesn't want Clemson in the top four.

Finebaum's comments were relayed back to Swinney during Tuesday's press conference. Clemson's coach said he harbors no ill will toward Finebaum or any media member in particular, but he continued to point out what he believes to be wrongheaded narratives associated with his team.

"I think last year's team was portrayed great," Swinney said. "They didn't focus on who we played. ... They focused on how we played.

"This year's team has been the exact opposite. I'm not sure anybody knows who (first-team All-ACC safety) Tanner Muse is! Do you know how good a year Tanner Muse has had? He's been unbelievable."

College and professional sports thrive on drama, with differences on the field spilling over into social media feeds and reporters' notebooks. That dynamic is exacerbated in college football, where mismatches and blowouts abound during the regular season.

On Tuesday, Swinney leaned into the back-and-forth, kicking off the day's news cycle with a steady stream of fresh soundbites. Late in the session, he claimed Clemson quarterback Trevor Lawrence, who attracted some early criticism this season after a string of interceptions, should be a finalist for the Heisman Trophy.

"Still talk about Trevor throwing interceptions," Swinney said. "They don't talk about all the touchdowns. Trevor, they thought he was good last year. He's so much better now than he was last year at any point. He's twice the quarterback right now than he was in the national championship game, when everybody was crowning him the king of football."

Finally, after 48 minutes at the lectern, Swinney took his cue from a Clemson public relations official. He smiled, shuffled his papers. The show was just about over, but Swinney had one last thing to say. He leaned into the microphone:

"Alright! See y'all in Charlotte!"

Gene Sapakoff column: Dabo Swinney went through hard times before winning two national titles. What South Carolina head coach Will Muschamp can learn from that as he ponders an offensive coordinator move likely to include the dismissal of Bryan McClendon