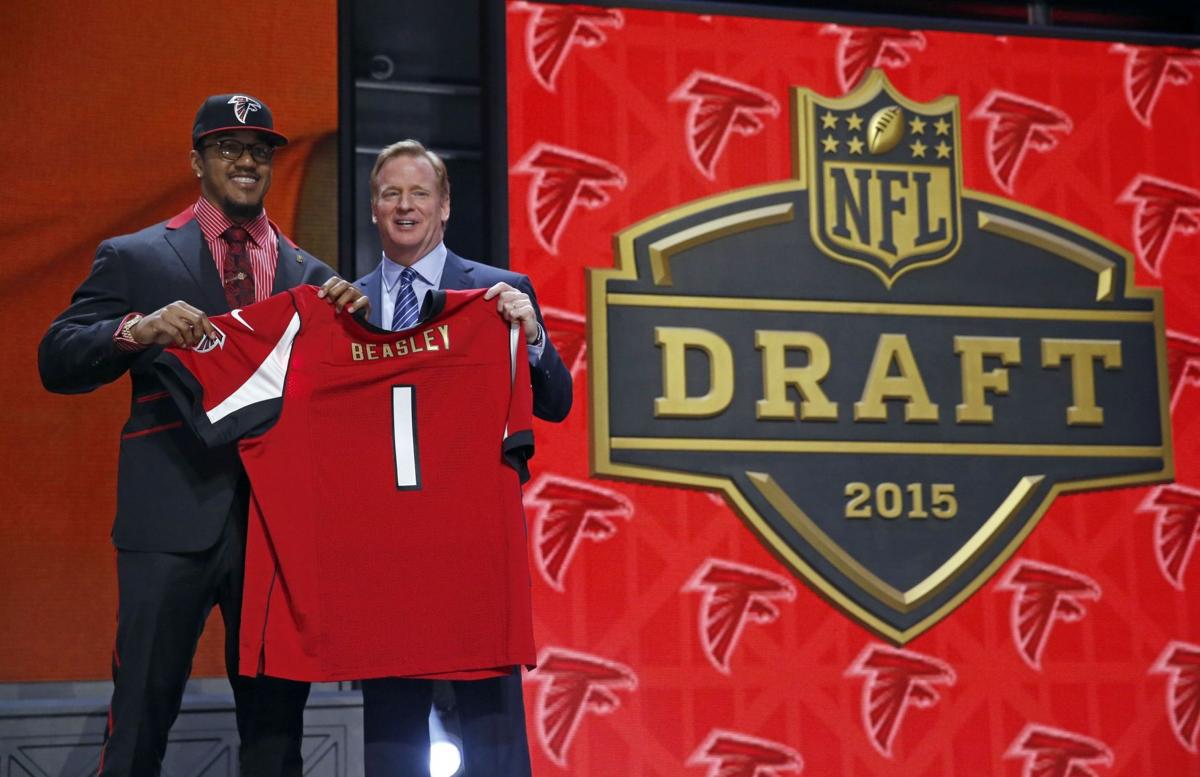 Clemson defensive lineman Vic Beasley poses with NFL commissioner Roger Goodell after being selected by the Atlanta Falcons as the eighth pick in the first round of the 2015 NFL Draft. Beasley made the Pro Bowl and led the NFL in sacks in 2016 but has struggled in recent seasons. File/AP 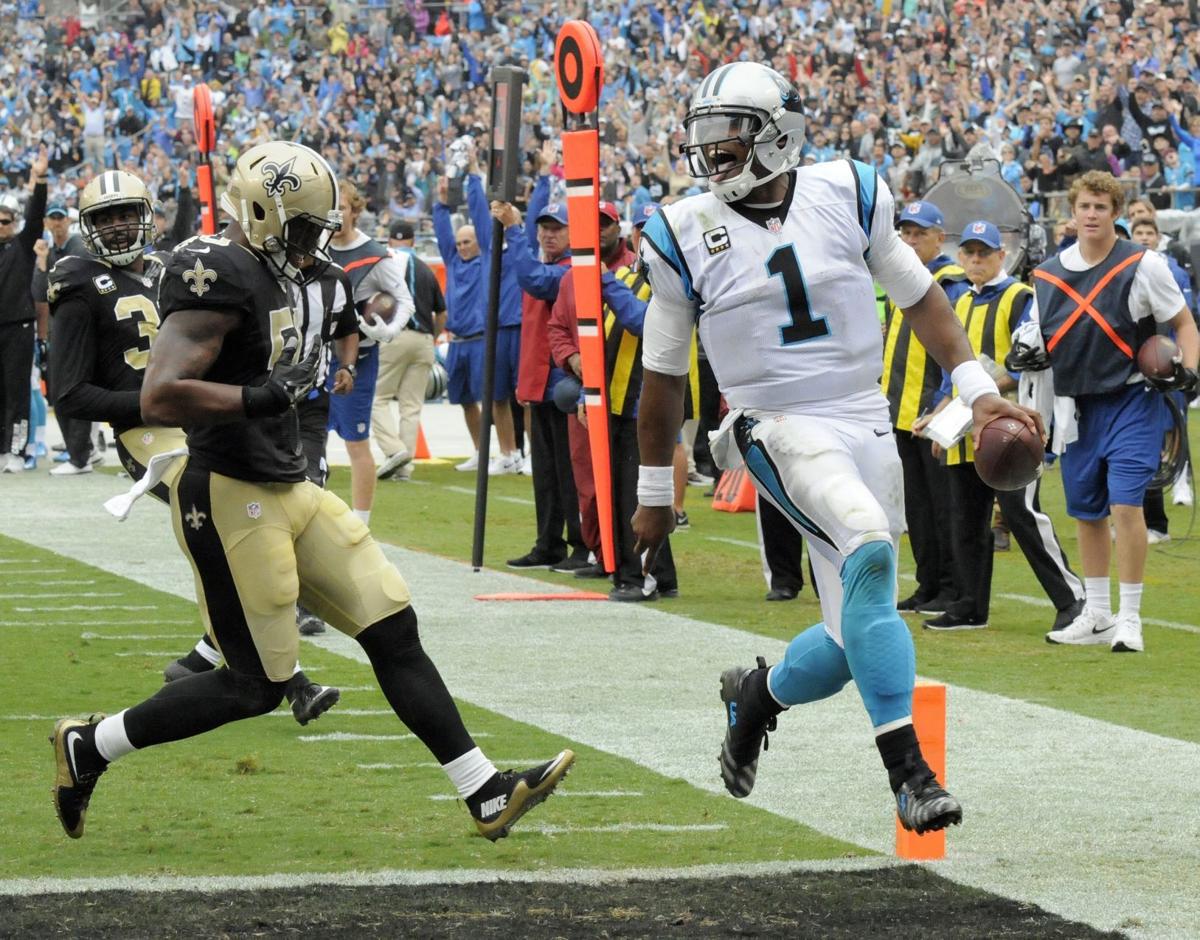 New Orleans Saints linebacker Stephone Anthony (left) was a 2015 first-round draft pick from Clemson, battled injuries and started only 20 games from 2015-2019 and didn't play in 2020. File/AP 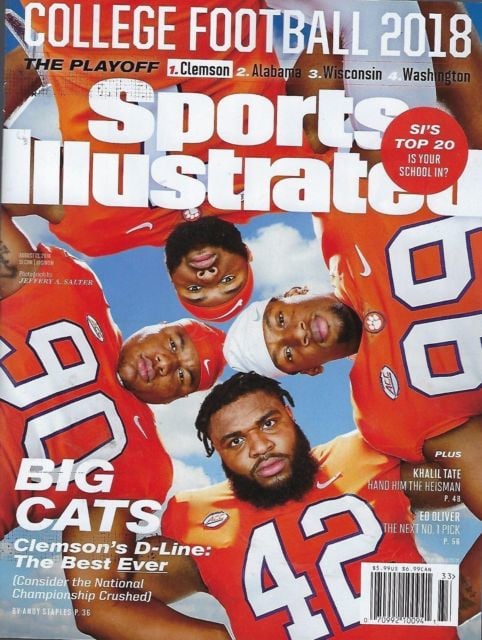 Christian Wilkins (42), Dexter Lawrence (90), Austin Bryant (7) and Clelin Ferrell (99) made the cover of the 2018 Sports Illustrated college football preview issue. Ferrell, Wilkins and Lawrence were all first-round picks in the 2019 NFL draft. File/Staff

The Jacksonville Jaguars spent too many AFC South Sundays suffering from the exploits of former Clemson stars DeAndre Hopkins and Deshaun Watson as Houston Texans teammates. They invested heavily in Trevor Lawrence and Travis Etienne, ex-Tigers picked in the first round of a 2021 NFL draft likely to pay off for years.

It hasn’t been nearly as easy to predict NFL stardom for prominent Clemson players on the other side of the football.

Twelve former Tigers on defense were drafted in the first or second rounds of NFL drafts from 2015-2020 and, so far, the lone Pro Bowl appearance among them was turned in by edge rusher Vic Beasley, widely considered a pro football disappointment.

Injuries play a huge part in NFL success. Linebacker Stephone Anthony, the Saints’ first-round pick in 2015, had trouble staying on the field early in his career and has had trouble finding work lately.

T.J. Green, a 2016 second-round pick, might become a regular starter for the Colts. But Indy fans hoped for more impact earlier.

One Pro Bowl appearance for 12 recent players picked in the first or second rounds over a combined 42 NFL seasons is way below the league average.

But when NFL execs must beware of spending high draft picks on people who play defense for Clemson, it’s a pattern worth explaining.

It’s also more of a positive thing for Clemson than a negative.

It shows how the power of great recruiting and superior player development when meshed with a mastermind defensive coordinator such as Brent Venables, good assistant coaches and a refined in-game scouting system can make players look just a little better as college prospects than they turn out to be as pro players.

Such a notion is as old as elite teamwork itself.

Some players from college programs with top coaches and lots of stars tend to struggle when not surrounded by outstanding support on mediocre pro teams.

And yet only one of Saban’s Alabama cornerbacks has made an NFL Pro Bowl, per al.com, and that was the Ravens’ Marlon Humphrey in 2019 and 2020.

And James Worthy and Bob McAddo.

Venables, 50, started as Clemson defensive coordinator in 2012. He is getting $2.4 million this year as a reward for a vital role in winning two national titles during a College Football Playoff run that’s six years and counting.

Here is Clemson’s 2015-2020 NFL draft history on defense in the first and second rounds, including NFL draft years, players, rounds, Pro Bowls from 2015-2021 and number of years as primary NFL starter from 2015-2021 (per profootballreference.com):

Combined Pro Bowl selections for all 12 of those guys: 1. Beasley made it in 2016, his second season with Atlanta when he led the NFL with 15½ sacks.

Beasley has 18 sacks over the last four seasons, the last of which was split between not contributing much for either the Titans or Raiders.

Google “Vic Beasley” and “bust” and see if you detect a theme.

The 12 Clemson players picked in the first or second rounds from 2015-2020 have a total 42 seasons among them, and just one Pro Bowl. That's a .023 Pro Bowl-per-season percentage

While nine players picked in the first or second round in 2019 have already made the Pro Bowl, it’s certainly too early to judge long-term impacts for Ferrell, Wilkins and Lawrence.

Not a good idea for Buffalo as a first-round pick.

The Bills didn’t have good luck with Clemson first-rounders C.J. Spiller or Sammy Watkins, either.

But, for now, the Tigers’ recent record of early-round NFL draft value on offense is way ahead of defense. These two shiny new Jaguars might work out, too.