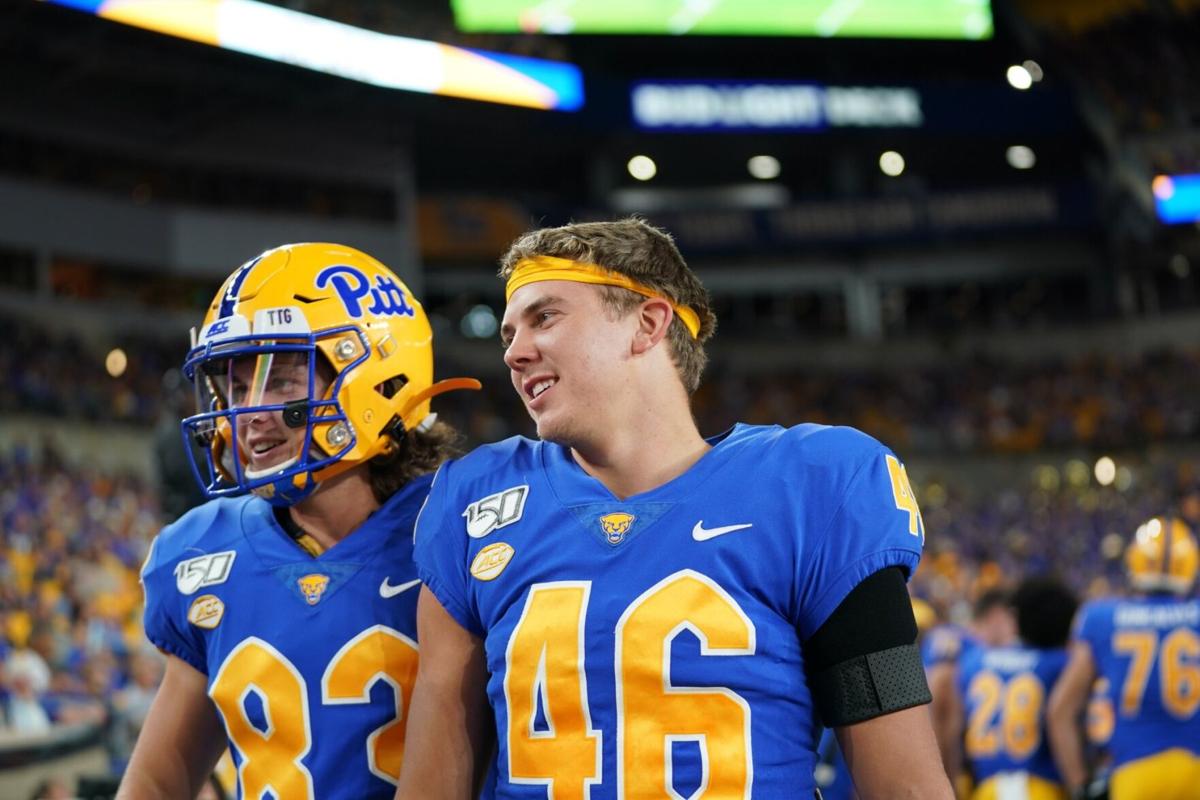 John Vardzel (left) is a redshirt junior wide receiver who played at Pittsburgh with his brother Michael Vardzel (46), now a quality control assistant coach at Wofford. Their younger brother Peter Vardzel is a Pitt freshman. The No. 23-ranked Panthers play host to Clemson on Oct. 23. Taylor Wilhem/University of Pittsburgh athletics 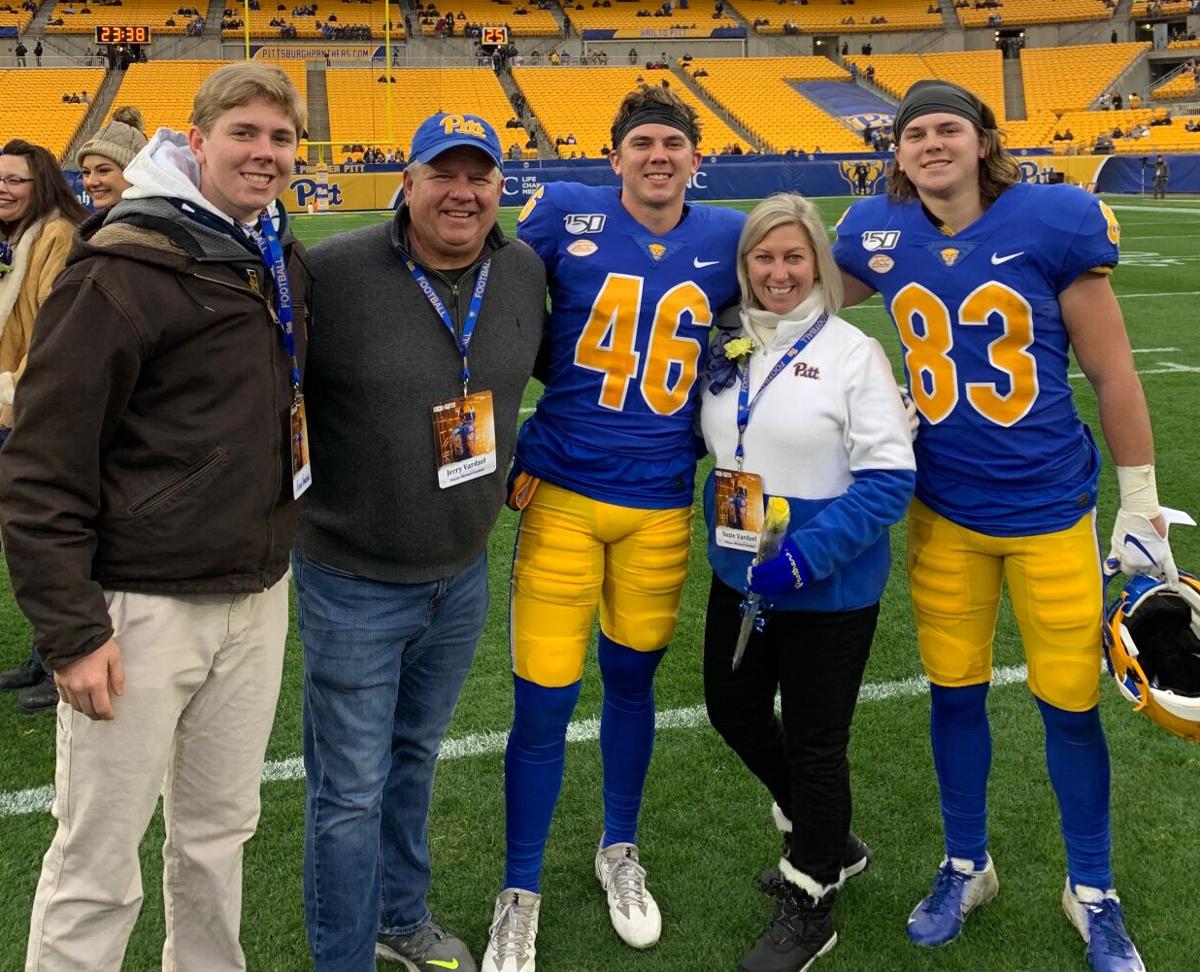 One play perfectly illustrates the resolve of a South Carolina brotherhood that keeps supplying the Pittsburgh football program with wide receivers who pitch in on special teams – the last meaningful play in the 2020 Pittsburgh-Clemson game.

John Vardzel earlier in the fourth quarter made his first catch of the season. On the next play, Clemson’s Kane Patterson recovered a fumble by running back Daniel Carter and dashed 57 yards.

Trotter, Clemson o-line looks to build continuity at No. 23 Pittsburgh

Only to get caught from behind and tackled by a wide receiver one yard shy of a Death Valley end zone.

“The play isn’t over until the whistle blows,” Vardzel said. “It felt personal.”

Patterson wasn’t strutting down the field or celebrating too early. And no harm for Clemson in a 52-17 victory on the way to a sixth straight College Football Playoff appearance. But everyone at Pitt took note of how Vardzel took a long half-circle route around the right side, outran three Clemson players and rammed into Patterson’s right leg with 40 seconds remaining (Clemson’s Darien Rencher lost a yard on each of the final two snaps).

One of the most inspirational plays of a football season full of adversity: ⁦@Pitt_FB⁩ reserve WR John Vardzel (Wando HS) with his team down big at Clemson gets a TV mention and right on cue hustles to stop a TD pic.twitter.com/8USOP52Jnb

John is just one of Pitt’s three Vardzel brothers from Mount Pleasant and Wando High School.

Michael Vardzel was a wide receiver on the Pitt roster the last time Clemson lost a home game, 43-42 to the Panthers, the lone blemish during a 2016 national championship season.

“It has really been a pleasure having three great young men like Michael, John and Pete at Pitt,” Narduzzi said. “They each have brought something very important to our program. They’re just a great family. We’re thrilled to have them.”

Michael Vardzel played at Pitt from 2016-2019 and is now a quality control assistant coach on Josh Conklin’s staff at Wofford.

John Vardzel, like Michael and Peter, came to Pitt as a walk-on but earned a scholarship for his work as a receiver and punt returner. He played his senior season of high school at North Allegheny in Wexford, Pa., just north of Pittsburgh.

Peter Vardzel has been injured much of his freshman year.

Narduzzi while reviewing tape a few days after the 2020 Clemson game cited John Vardzel’s hustle as an example of Pitt grit.

Michael blazed the trail to Pitt after considering some other scholarship and walk-on offers. He opted for Pitt academics – he has a finance degree – and the good relationship with the coaching staff fostered during summer camps.

Michael played at Pitt with John.

John plays at Pitt with Peter.

Michael got to coach John at Wando High School in 2020 while breaking in as an assistant coach.

“Football is such a camaraderie sport with all the practices and offseason workouts and everything. Everybody becomes like brothers when you’re going through that process together,” said Michael, who hopes to rise in the college coaching ranks or work in the NFL. “But to actually play with your brothers is something really special and really cool.”

John credits Michael for being “the perfect example” of work ethic, and for showing what it takes to navigate college football workouts, practices and academics.

Like most brothers, the Vardzels bickered and battled as kids, from card games to backyard sports. They drove each other with criticism and encouragement. Mix in Jerry and Suzie Vardzel’s older daughters, Jane (who played soccer at Charleston Southern and College of Charleston) and Kathryn, and it often was a rambunctious household.

“It was always a competition for the simplest things,” Michael said, “but outside the house we’re each other’s biggest supporters.”

Clemson offense trying to get rid of the 'stink,' as Swinney puts it

The primary Vardzel focus this fall is on John and Pitt’s bid for a second ACC Championship Game appearance in four years. The Panthers made it to Charlotte in 2018, losing to Clemson, 42-10.

Pitt is No. 5 nationally in total offense.

“The best word to describe this season is ‘exciting,’” John said. “You can feel the energy in our program growing week by week. Our offense feels like we still have some room to grow and we’re excited about that.”

Pitt is a 3-point favorite over Clemson this year.

It was a blowout the other way last November at Death Valley, except that John Vardzel’s quit-proof hustle gave the Panthers something to cheer about in the final minute. His parents and brothers were in the stands.

“That’s who John is,” Michael said. “John is a competitor and a really good athlete. He knew that kid was not going to score, that he was going to go tackle him.”

John also knew that if he came up short, his brothers Michael and Peter would have never let him hear the end of it.

Three members of the same Mount Pleasant family, all former Wando High School players, have been wide receivers in the Pittsburgh football program: